In our recent review of Super Phantom Cat ($1.99) I remarked that I “wished the developers had been as creative with the platforming genre as they’d been with the art”. I loved the game in large part because of its wonderful presentation, and the solid gameplay was definitely fun despite feeling a bit too safe at the end of the day. And now, immediately after, I have Kenny Sun’s Circa Infinity (Free) in my hands. It’s striking in that I like the game just as much as Phantom Cat, but my reasons for it are exactly the opposite. The gameplay in Infinity is unlike anything I’ve played before, to the point where I’m not even sure you could call it a “platformer” at all. The game’s presentation, however, is pretty solid but nowhere near as eye-catchingly beautiful as Phantom Cat. None of that should be taken as complaining, though, because I’m sure there are plenty of people who are completely over the moon for the traditional gameplay of the former and absolutely in love the sparse pixel stylings are of the latter. 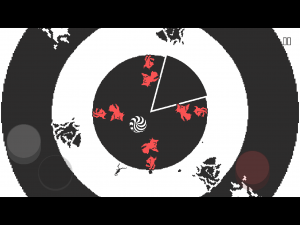 Of course, this review is about Circa Inifinity, so I’ll stop making cat game comparisons and just get on with it. You play as an apparently naked woman (and later, a definitely naked man) who seems to be stuck on the outside of a giant circle. You can move left and right and jump to avoid enemies, but the gravity of the circle will always suck you back to the “ground”. There are plenty of iOS games that use a similar mechanic, but the only one I can ever remember is the great Soosiz (Free), which at the time of release was described as “2D Super Mario Galaxy”. So you get the idea.

Where Circa Infinity differs is the fact that the game is not just one circle, and the other circles are not spread out in space for you to travel to and from. No, each concurrent circle is inside the last, sort of like the rings of a tree. But each ring is actually sort of like a pizza, because there’s a triangular slice on each one that acts as a portal to the inside when you hit the jump button over it. Circles, triangles, trees, pizzas… confused? Once you see a video or picture (or even better, play it for yourself) it quickly makes sense and the mechanics become crystal clear. 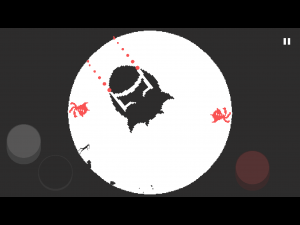 What was slightly harder to get my head around, though, were the controls. I say “slightly”, because they are actually dead-simple and very responsive with a typical “directions on the left and jump on the right” button setup, but the fact that you’re running around a circle makes it a little confusing sometimes. Pressing left at the top of the circle will make you go left, but once you’re on the bottom left will suddenly be right. It’s not a problem at all when you’re strolling around casually, but there were times in the heat of the action when I’d flip to another circle and be momentarily disoriented by the controls and would die. Again, it’s hardly even a problem (and is mostly likely a deliberate part of the challenge) and it becomes close to second nature after a while. 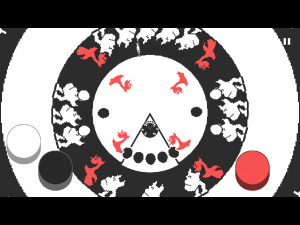 Speaking of dying, the further you get into the game the more you will do that. The first few levels are pretty easy, but eventually the game starts throwing more and more enemies at you. It’s actually super clever how the levels themselves hardly change at all (they are always plain ol’ circles) but the different enemy types become the hazards in the environment you need to watch out for. There are some that run, some that fly, some that stand still, some that hover, and even some that can melt between circles. Later you’ll start seeing even more creative behaviors, like some enemies that only move (or only stop) when you jump. Eventually you’ll even have to avoid enemies on previous circles that you’ve already passed, since they are so tall their heads hang down into the next area. On top of all that, there are even boss battles at the end of each “world”.

Luckily, when you die you don’t have to completely start over. Continuing the theme of the game having a surplus of clever ideas I haven’t seen much of before, each time you get hit you simply teleport back to the previous circle for you to try again. It may not seem like much of a punishment at first, but eventually the levels get so crazy that you’ll almost immediately get hit again on every circle you move back to–unless you’re ready for them. Mercifully, the game also inserts circles with no enemies (or very few) every so often so you don’t death spiral all the way back to the beginning of the level.

Circa Infinity is a game that may not look like much in the screenshots, but if you like twitch-y arcade games and outside-the-box platformers I can basically guarantee you’ll fall in love with this. Plus, once it’s in motion there’s a weird kind of ugly beauty to the aesthetic, like a nightmare version of Downwell ($2.99). Be warned, though: it gets insanely hard. Like “patting your head/rubbing your belly” hard. If any of that sounds even remotely interesting to you, do yourself a solid and hit that buy button pronto.