Lost In Harmony (Free) is the latest game from Yoan Fanise, whose work at Ubisoft included directing Valiant Hearts (Free) and Rayman Raving Rabbids, along with sound design and audio direction on titles such as Beyond Good & Evil, Rabbids Go Home, and Assassin’s Creed 3. With that kind of resume, it’s perhaps not surprising that Lost In Harmony attempts to be an audio/visual spectacle, a heart-wrenching experience, and a unique hybrid of gameplay styles all at once. It succeeds completely on the first point and reasonably well on the second, but there are some definite issues that crop up with the third point. You can get a lot out of Lost In Harmony, but you’re going to have to forgive a few things along the way.

The game follows the story of Kaito and Aya, a pair of teenaged friends who are forced to deal with one of the deadliest monsters reality has to offer. We get to see their words between stages, but it’s the stages themselves that are most revealing about their relationship and how it progresses. It’s a stage-based auto-runner, but instead of your character running into the screen, he’s skateboarding out of it, like the chase sequences in the PlayStation 1 Crash Bandicoot games or, well, Valiant Hearts. It’s also a rhythm game, and perhaps it’s more of that than it is a runner. Obstacles are timed to go along with the music, and you’ll occasionally have to tap or swipe marks that appear. One entire stage partway through the game is nothing but tapping and swiping, and it ended up being one of my favorites. These two gameplay forms aren’t as discrete as you might think, either. Often when you’re tapping away at beats on the top half of the screen, obstacles are still incoming, requiring you to use your other hand to dodge. 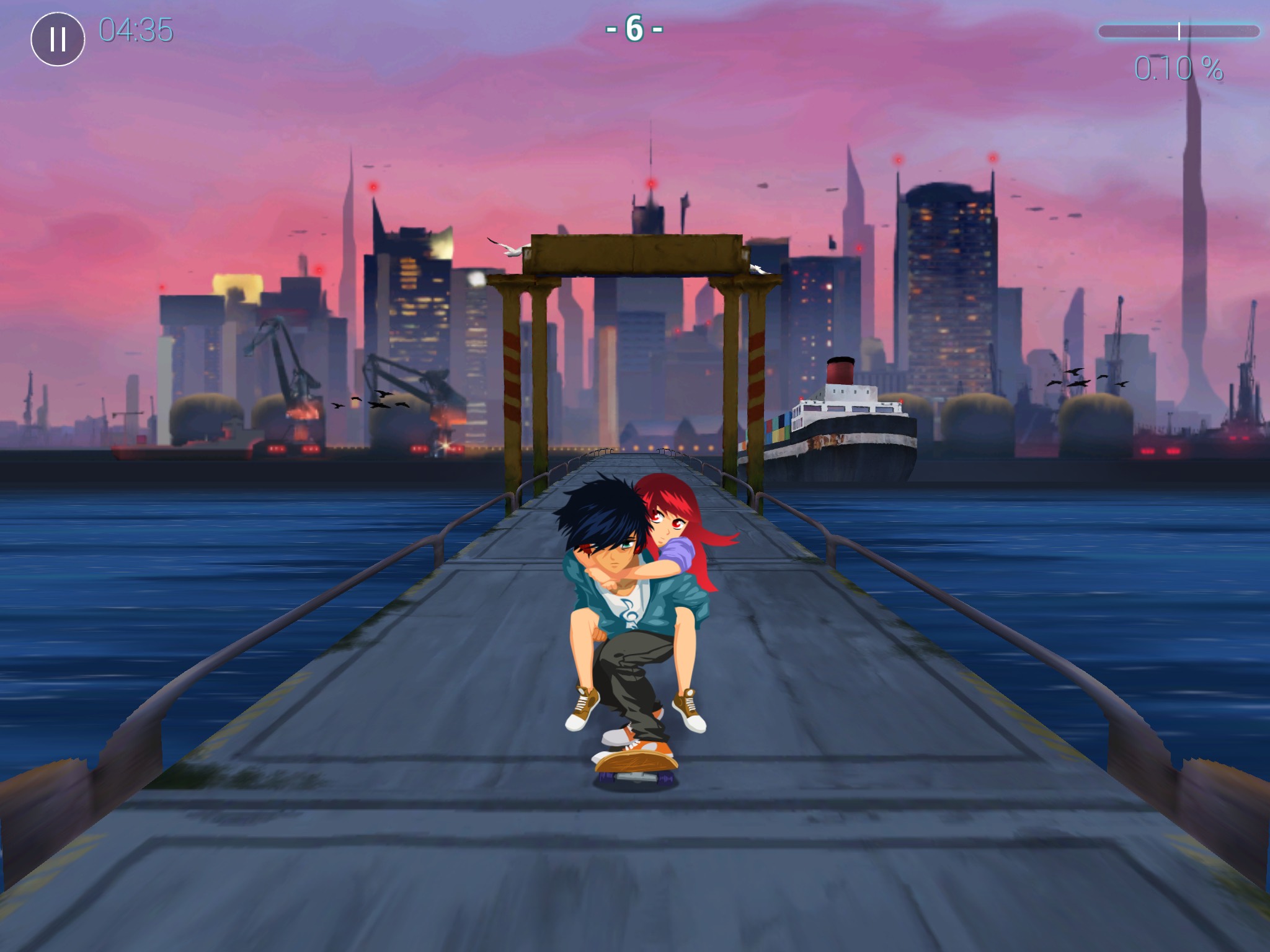 That’s one of the problems with the game. There are subtle cues about when you’re going to need to divert your attention, but they’re all too frequently lost in the noise. Until you get a feel for each stage’s layout, it’s all too easy to miss the first note of a batch, or run into an obstacle because you were focusing on tapping notes. The game sections these activities by dividing the screen in half control-wise, but even once you realize that, it can be tricky to keep both plates spinning without, say, accidentally veering Kaito off the edge of the track when you’re trying to do a swipe. You need to watch for incoming objects in every direction and stay on top of the notes without misplacing your fingers, and it doesn’t always work as well as you might like. Add in some collision problems where objects that shouldn’t hit you do, and the game can occasionally get downright frustrating.

If you’re just in Lost In Harmony for the story and the roller coaster ride, however, it’s not that big of an issue. You’ll take some unfair hits and miss some notes, but the story will always move forward. It’s when you try to tackle the hard course of each stage or shoot for perfection that things can get aggravating. A little extra warning time would help a lot, but all the warning in the world isn’t much help against objects hitting you when it looks like you’re in the clear. I feel like Lost In Harmony is onto something with its basic structure, though. Having to direct a character with one hand while tapping out notes with another is an interesting exercise, not unlike patting your head while rubbing your belly. It’s a fun twist on both rhythm games and runners, but it could use a little more refinement to work out its kinks. 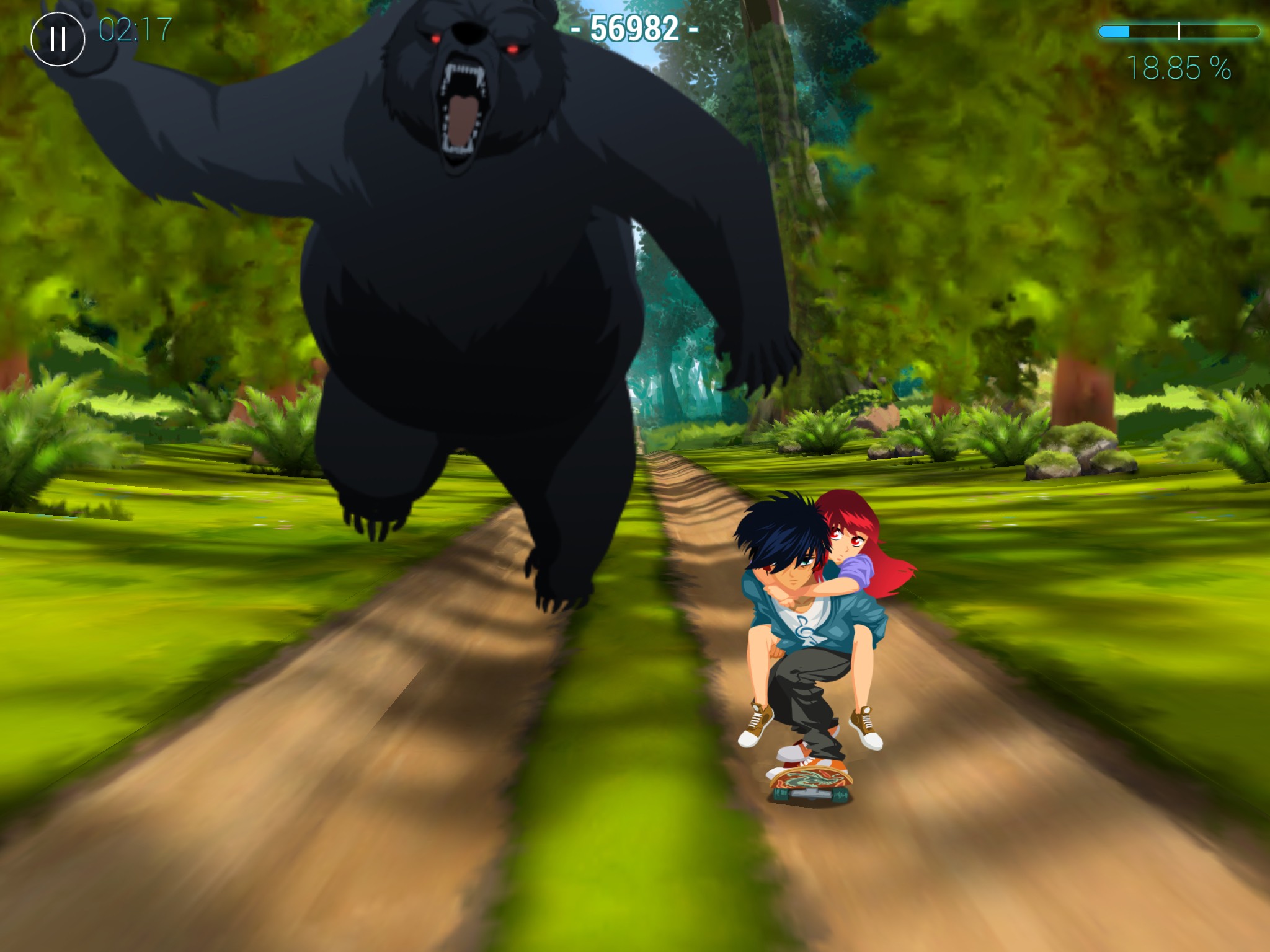 Where Lost In Harmony shines the brightest is in its presentation. I’m not sure which part is more stunning, the gorgeous art or the outstanding soundtrack. Each of the game’s levels follows a particular motif based on the plot, and will usually change mid-level through a few different visual themes and songs. It’s hard to go into much detail without spoiling the plot, but Kaito and Aya’s circumstances become more complicated as the game goes on, with the final stage a beautiful synopsis of what we all go through when we lose something important in our lives. There are times when they fall into despair, times when they’re feeling hopeful and above all of their problems, times when they are trying to run away from the situation, and times where they are just enjoying a quiet bit of calm. The stage designs follow this twisting road of emotions in powerful ways. It stops along the way to have a bit of fun with a video game classic, and there’s another stage early on that, while powerful, feels very much out of place in this game, but for the most part, the scenes going on around Kaito and Aya have a strong symbolic connection that’s easy to pick up on.

The soundtrack is simply wonderful, featuring remixes of classical music, an original song by Wyclef Jean, and even an arranged piece of music that will be familiar to puzzle game fans everywhere. Every song matches the mood for that point of the story perfectly, and in combination with the visuals tells the story in a much stronger fashion than words could ever hope to. From a gameplay standpoint, the music selection makes for a pleasing mix of speedy and relaxed sections, giving you little moments to savor the beauty of what you’re playing. Most of the stages run around five minutes or so, and typically feature two or three musical selections. While I won’t spoil the exact number of stages, it makes for a very healthy and varied soundtrack. 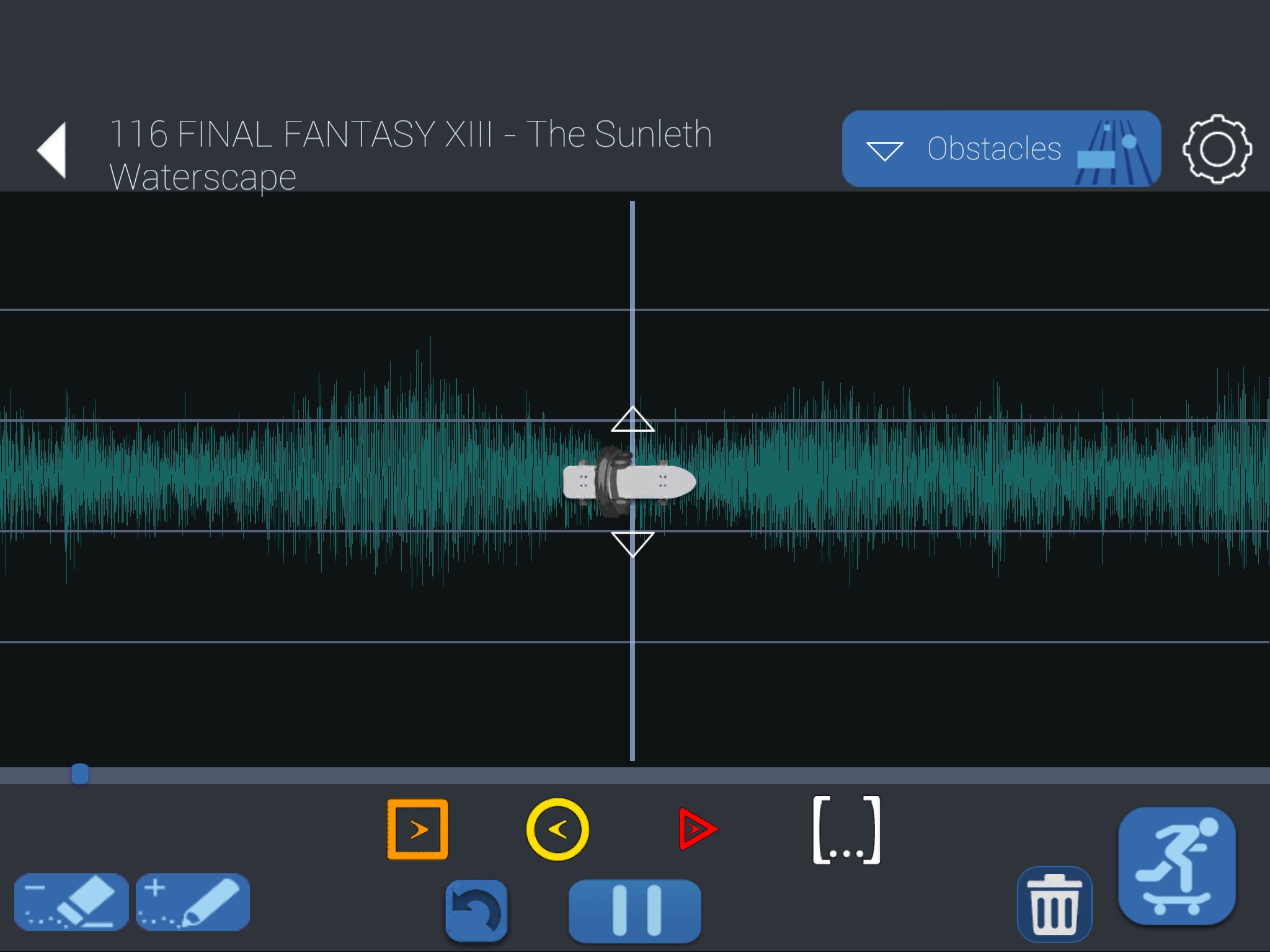 I haven’t even touched on the game’s other mode yet, a custom mode that allows you to make your own stages with whatever music you’d like. You can upload from iTunes or search for a song via Soundcloud, and the stages you make can be shared with the whole community. That also means that even if you aren’t interested in creating stages, there are potentially a limitless number of stages for you to play. Provided the community stays healthy, anyway. You don’t need to own the song associated with a stage to play it, since you’re streaming it via Soundcloud. The customization tools are fairly easy to use, and since the editor shows the waveform of the song, placing obstacles according to particular beats and notes is relatively painless. For the moment, it’s hard to make anything that even comes close to the main designed content, but the game’s first update added a little to this mode, so I imagine more additions will follow.

Lost Harmony is an audio/visual triumph with a few gameplay quirks that trip it up here and there. I don’t think I could nail down the exact exchange rate, but I know that I’m willing to put up with some gameplay deficiencies if a game manages to delight my other senses, and that’s certainly the case here. Mind you, that only goes so far, and I’ll admit that as gorgeous as the presentation is in Lost In Harmony, there were times were the gameplay issues really took me out of the game. In general, the game is dazzling enough that I would recommend taking the ride, even if things sometimes get a little bumpy on the way.