Tower Of Fortune 2 ($1.99) was just about everything you could want in a sequel. It kept the core elements that people enjoyed in Tower Of Fortune ($0.99), but expanded out on them greatly. It felt like the first game, but more. It’s a good approach for a first follow-up, but as many developers can attest to, there’s only so long you can play it safe before things start to sour. Game Stew seems to be quite aware of that, having taken an extended break away from the main Tower Of Fortune series to work on various other game ideas. Now returning to the Tower Of Fortune series, the developers appear to be eager to apply some of the things they’ve learned to make a decidedly different sort of sequel.

The most obvious change in Tower Of Fortune 3 ($1.99) is the presence of color graphics. While the visuals are still made up of chunky pixels, they’re no longer black and white. It makes for a slightly different mood, but I think it’s a good change. You’re once again tasked with ascending a tower made up of several different areas, and death sends you right back to the beginning stripped of all of your possessions save your gold. However, like before, once you’ve unlocked a new section of the tower, you can head right back there if you like. As for how advisable it is to enter an advanced area without much more than the clothes on your back, well, that gamble is up to you. Also making a return is the now-familiar slot-based battle system, where you spin the wheels to see if you deal damage, take it, or perform some other action. There are some new quirks to that system, but it’s largely as it was, adding an element of risk to every move. 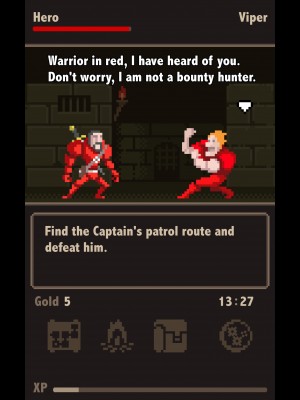 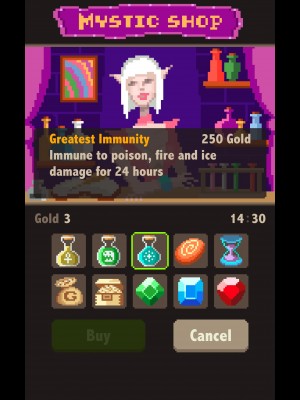 Beyond that, things are pretty different in Tower Of Fortune 3. You’re not simply moving along a straight line rolling the proverbial dice to see what events you stumble on. Now, you have to navigate maps by choosing which rooms you want to explore. Certain areas are only fully accessible at particular times of the day in-game, so you might have to walk around a bit if you want to get at them. Random events will still occur, and you will have to fight a boss and pay an entrance fee to move on to the next area, but the overall gameplay offers considerably more freedom. You’ll have to piece together clues at times to solve puzzles, even. As you play further in, these role-playing elements become even more pronounced. There are various factions in this tower, and you can join one of them to reap the rewards of serving their needs. There seem to be more NPCs, and each of them presents more options than before, too.

All of this freedom can be dangerous if you go into this game playing it like you played the other two. Those were very difficult games, and if you try to take a similar gung-ho approach to this one, it’s even harder. You can and should pick your battles this time around, and take advantage of places where you can load up on easy gold and XP. You’ll want to spend as much time as you can on each floor to build yourself up, something the game appears to be okay with. And of course, you’ll once more want to make full use of that wonderful tavern, where you can spin the slots to play mini-games and buff up your stats. The new game structure leaves Tower Of Fortune 3 in the challenging position of being something closer to a normal RPG, but with roguelike difficulty and consequences. I suspect some people are going to chafe at that, because it feels like you’re losing a lot more this time around when you die, and the presence of an IAP to buy gold might lead you to suspect the game is pushing you even harder towards shelling out. 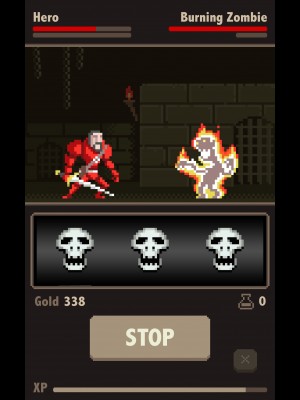 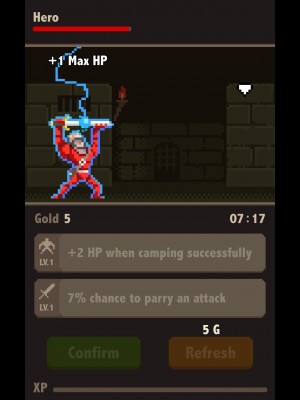 As with the previous game, though, it’s more the case that these games are designed to be very difficult. You should expect to die a lot. Don’t look at the gold as the permanent gains from such deaths, but the actual experience that might help you do better next time. There are a lot of things left to luck, as this isn’t called Tower Of Nothing Terribly Surprising, but much of the game’s challenge comes from the unexpected and the player’s own impetuousness. Take things slowly, know when to run away, and take note of the things you come across, and you’ll be on your way eventually. All that said, if you found the last game to be too punishing, you’ll probably find this one just as tough of a climb.

For my part, I found the new systems in the game to greatly add to the Tower Of Fortune experience. I think it’s less of a pick up and play experience compared to the previous titles, but I liked having a bit more crunch per bite, and if I want something a little lighter, I can still go back to the previous games. Slowly building up my character, gathering better equipment, ingratiating myself to my chosen faction, and slowly rising up the tower was an awful lot of fun, even if the occasional late-game death was extremely painful on a spiritual level.

Tower Of Fortune 3 falls into a weird trap that I hope doesn’t hurt it too much. It’s still enough of a Tower Of Fortune that it’s unlikely to attract new fans, but it’s also different enough that it might be off-putting to fans of the previous games, at least initially. If you stick around long enough to get into the new flow of things, it’s just as rewarding (and aggravating) as the last game, but with a unique feel of its own. On balance, it’s probably not quite as tightly-designed as the second game, but I also commend it for trying new things without anything going terribly awry.