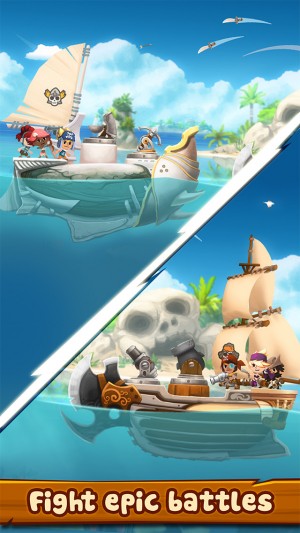 If the name Godzilab isn’t immediately familiar to you, it should be. They’re the dudes behind iBlast Moki (Free) and iBlast Moki 2 (Free), two amazing puzzle games that are actually old enough to still have the “HD" suffix. They went on to release Happy Street (Free) which is a clever spin on the popular style of casual free to play builder-ish games (I guess you could call it a builder? Maybe?) at the time. Since then, the Godzilab guys have gone sort of quiet, hard at work on soft launching Pirate Power (Free), a game which has been tweaked and tuned since it hit our forums last summer.

Since then, players have slowly been discovering its soft launched existence, and aside from bug reports here and there, the thread is filled with people loving the game. So what do you do in Pirate Power? The basic gist orbits around the idea of building up and customizing your pirate fleet, witch a bunch of different strategic options for you to explore, then fight against real human opponents. There’s a single player component too where you fight against huge bosses and other NPC opponents as well if PvP isn’t your thing.

Godzilab have created some truly classic iOS games, so even if you’re not totally wild about free to play PvP battle games, this one seems worth at least a cursory once over. If you love cutesy pirate stuff? Chances are Pirate Power will totally suck you in.