Jared Bailey (aka No Can Win) is one of my favorite developers on the App Store. I loved Cubed Rally Racer (Free), and was near-obsessed with the follow-up, Cubed Rally Redline (Free). After that, though, he started focusing on much simpler Ketchapp-style games that weren’t really my cup o’ tea. The last game of his (which I reviewed) was called Super Bounce Back (Free), and it seemed to be a step back in the right direction, with a clever concept that was slightly more involved than the “one-button-quick-reaction” style games he’d been putting out after the Cubed Rally series. And fortunately for me (and you, I suppose), his latest effort Rocket Ski Racing (Free) climbs out of that inverted bell curve even further. Simply put, it’s a blast. 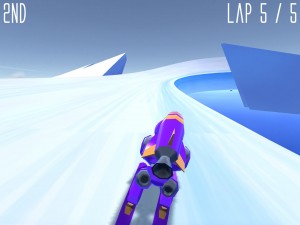 In Rocket Ski Racing you play as a skier with a rocket strapped to his or her back, and you must race. (I mean, if it wasn’t clear from the title.) There are six different snow covered courses that twist and curve and loop around, and you have to get to the finish line before your multicolored opponents do. Each race is usually pretty quick, with around 5 laps that whiz by in under a minute. They go by so fast, in fact, that one of the keys to success is memorizing when and where to turn, since you can’t always see very far ahead and there’s no map.

Luckily, before each regular race there’s also a Gate Chase mode that helps to familiarize yourself with (or refresh your memory of) the track you’re about to race on. In this mode there are ten gates that you must race through without missing any, which is fairly standard in a lot of racing games. The twist is that these gates, much like your racer, are rocket-strapped and flying forward almost as fast as you are. (That’s where the “Chase” part comes in.) 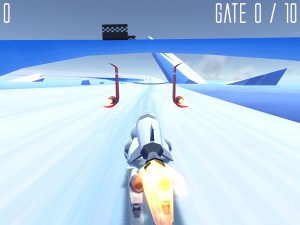 Progression-wise, there’s basically just a career mode, or “Season”, that consists of 24 races that must be played in order (somewhat similar to Cubed Snowboarding ($0.99)). You’ll race through each of the six courses four times each (first with the Gate Chase and Race modes back to back, and then you’ll go through the whole thing a second time), and there’s no way to restart the season as a whole. You just play from Race 1 to Race 24, and then start again at the end if you want to try for a better score. You can watch an ad to restart the previous single race you played to get a better score, but, as I said, you can’t start the season over until you’ve finished it, and you also can’t jump straight to your favorite level or mode.

To control the game, you can either tilt or tap either side of the screen to move left and right. Or, that’s what I stupidly assumed the first few times I played, anyway. I was close to rage quitting the game altogether at how jerky and imprecise the touch controls were until I realized you’re supposed to actually swipe the screen back and forth, not tap. Whoops! Anyway, tilting and swiping each work incredibly well, and the best option comes squarely down to personal preference. Plus, you can tweak the sensitivity of each one in the menu. 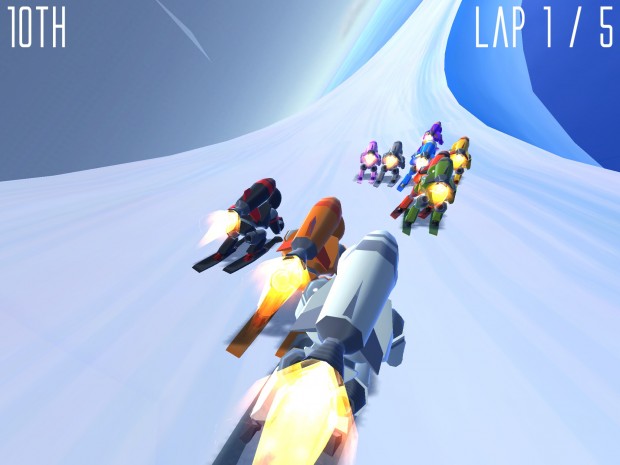 As much as I adore the racing mechanics, controls, fantastic sense of speed, and clean visuals of the game, I do have some nitpicks. Chief among them is the way the Season works, as I detailed earlier. I’m not a fan of being forced to play straight through it without being able to start over. The way it works now, if you’re four races into the season and realize you’re doing terribly, you have to suck it up and play through the remaining 20 before you have a chance at redeeming yourself. (The ability to watch an ad to restart your last race is a welcome touch, but not quite enough to stave off frustration in the long run). Compounding that problem is the fact that the game is really, really hard. I’m usually no slouch at racing games, but hot damn did Rocket Ski Racing kick my butt for the first hour or so. (Hint: Stick to the blue line.) Luckily each race is pretty short, but it’d be nice if there was some sort of practice mode or something to hone your skills before jumping straight into the unrelenting Season.

Rocket Ski Racing doesn’t quite reach the highs of Cubed Rally Redline for me, but it comes a lot closer than I was expecting. It’s a great leap forward from Super Bounce Back (which I still enjoyed), and I hope Bailey continues this shift back toward the more arcade-y thrills of his first few games. Rocket Ski Racing is a very solid game from a very solid developer, and I can’t wait to see what No Can Win puts out next. Perhaps we’ll see Rocket Ski Redline someday?