Having grown up with a controller in my hand, I’ve learned quite a few skills by way of video games, ranging from vocabulary enhancements, to motor skills, and even things like geography. One of the more practical things I picked up though is general sports knowledge. In fact, it’s where I first learned golf, with my uncle breaking down the specific function of each club, and when to use them.  But the game of golf never really took for me, and to really get into the sport of it, I needed a bit of persuasion, sometimes of the fantastical variety. Enter Kirby’s Dream Course on the SNES, with wonderful gimmicks like ball morphing and leaping over pitfalls and other hazards, and I was in. I never thought that 20 years later, I’d be writing about a similar experience on iOS, but here we are with Frank the Dillo ($0.99). 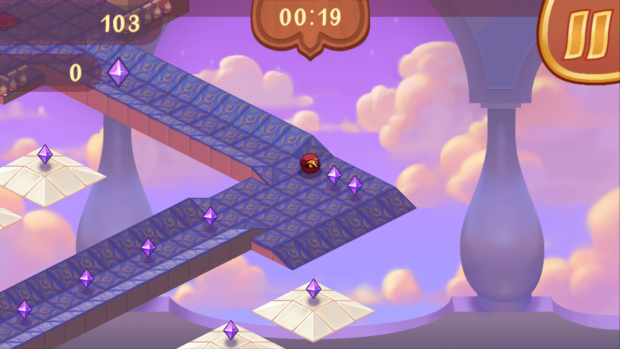 In short, it’s a golf game, with a titular armadillo as the ball. You won’t have any clubs though, as players will have to guide him in terms of direction and power, easing him into a goal at the end. It follows the Marble Madness style of surrealistic landscapes, with floating islands and plenty of gaps to fly through. It’s not an original idea but the level design is well executed, to the point where it’s easy enough to know where to go next, without necessarily spelling it out for you entirely and ruining the challenge. It helps that the soundtrack is upbeat and the visuals are bright and crisp. You’ll never lose sight of your objective or any potential objects once you acclimate to the isometric perspective.

The control method is a tad taxing at first, but it’s easy to get the hang of it, especially when you realize that there’s no real time limit involved (outside of a general scorekeeping element). Basically, all players have to do is swipe in any direction near the ball (Frank), and then lead the line that appears in the direction that you want to hit him. Distance and velocity approximations will appear, which are key to your success. See, while the lines are fairly accurate, learning the exact feel of the velocity will allow you to make better shots, like chips into certain zones or longer leaps across chasms. 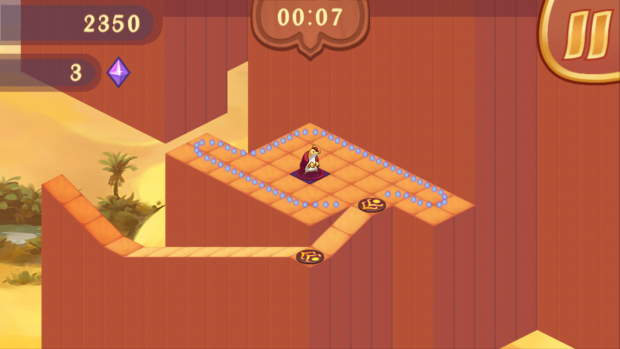 Along the way you’ll encounter tiny dots (points) and larger crystals, which effectively serve as lives. It’s possible to get to the end of every level without collecting anything, but of course, the best players will keep both of these principles in mind as they make their way through a course. It’s not very smart to spend multiple turns trying to earn just one crystal, but often times you can swipe a few of them at a time if you’re tricky enough.

And really, despite the lack of content, this is where Dillo shines. I would often go back through levels multiple times to try to approach them differently, using new tactics that I had picked up over time. It’s surprisingly deep and the physics are kind enough, I just wish there were more areas to tackle. There’s no other strings attached here, though. Although the caveat that there’s only a few stages is incredibly important to take note of, there’s no advertisements or microtransactions afoot, waiting to rear their ugly head. It’s an old school style game through and through, and outside of propping up your high score, you won’t get much mileage out of it.

Having said all that, Frank the Dillo is a great way to pass the time if you’re looking for a golf-like game. It could use a few tweaks and some more content, but it works just fine all the same.