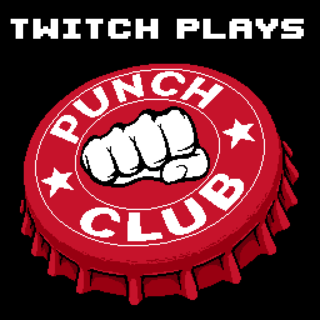 In June of last year during the E3 conference we sat down with publisher tinyBuild to scope out their just-announced boxing simulation/adventure game Punch Club, which they were co-developing with Lazy Bear Games. In just that few minutes that I was able to play an early version of Punch Club it made an incredible impression on me. Parodies, ’80s references, and absurd humor were everywhere, and it was glorious. It was like a Kairosoft game mixed with Saturday Morning RPG ($5.99) and Punch Out! which to me was a totally winning combination. Anyway, I’ve been looking forward to its release ever since and in fact the game is actually finished as we speak. There’s just one problem: tinyBuild is forcing the Twitch community to cooperatively beat Punch Club live on stream before they’ll release it. Those dastardly fiends! If you still aren’t clear on the whole situation, this helpful trailer should explain things for you.

As of this writing, the Twitch community is about 30% complete with the game, which isn’t too shabby. If and when they’re able to beat Punch Club, the game will then immediately launch on Steam, where it’s currently available for pre-order at 20% off its normal price. The iOS version will follow “soon after" which could mean tinyBuild will flip the release switch and it’ll pop up within a few hours or that it still has to go through Apple approval or something and may take up to a week or two to show up. Either way its mobile release is impending and I can’t freaking wait. In the meantime head over to the Twitch Plays Punch Club channel to help the community through the game or simply sit back and watch as this strange phenomenon of crowdsourcing game completion continues with Punch Club.