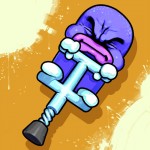 The mobile landscape has shifted quite a bit since the introduction of the App Store. In the beginning, the market was flooded with tons of hardcore experiences, meant to cater towards the console and PC gaming crowd. But over time, a lot of those games started to thin out, in favor of garnering massive audiences with casual titles and aggressive IAP “platforms." While there are a lot of gems in either side of the coin, it’s nice to get a difficult game ever now and then, which includes the inevitably polarizing Gopogo (Free). 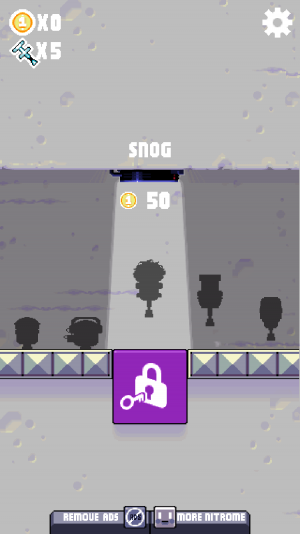 Nitrome is normally known for easy to pickup, accessible games, but that’s the exact opposite here. And you know what? As a retro-era gamer, I’m perfectly okay with that, mostly because of the fact that it’s possible to pick up the game’s physics and master them over time. For the first hour or so (which is not common for mobile games), I was completely stuck, and felt like I wasn’t getting anywhere. But I saw a glimmer of hope, and kept at it — and I’m glad I did.

Gopogo‘s control scheme is so simple that it’s tough to conceptualize what makes it so difficult until you actually play it. All you need to do is tap a direction on-screen, and your pogo stick will alter its course ever so slightly, depending on how rough you are. You can angle left or right, initiating a large leap or a tiny little hop. But learning the physics system is really where you’re going to be spending most of your time, as one tiny little misstep (hop) can result in consecutive frustrating deaths.

For instance, hitting an enemy, object, hazard, or an edge will result in an instant game over. Most of these obstructions are obvious at first and it’s mostly the player’s fault for failing, but you really do need to get a feel for the engine before you start dodging gracefully. Along the way players can pick up coins (to buy new characters), on their way to the finish line. That’s basically it in terms of the gameplay flow (start to finish), but the process is so fun that you’ll forget about the deaths along the way.

Because really, Nitrome does a good job of mixing up the level designs across the course of the relatively large campaign. There are horizontal and vertical layouts alike, and the latter is probably my favorite, because of the more deliberate movements that are required to best those stages. Crumbling platforms, moving blocks, and more will start to appear as you make your way through the mission mode. 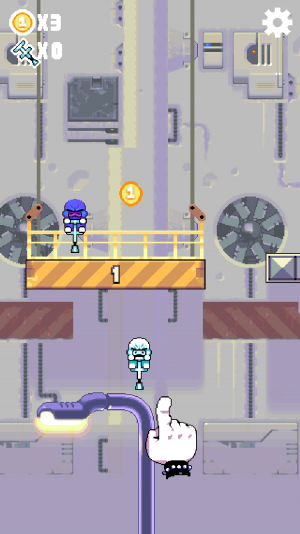 Where things start to get muddled though, is the IAP system. In short, the game is supported by ads, which are annoying, full-stop. In addition to ads for their own in-house series of games, Gopogo is also bombarded with banner ads on the bottom of menus, as well as full-screen ads that play after several failed runs. Videos can also be queued up to earn more lives after failures, which is a fairly common and optional practice that I don’t really take umbrage with. Rather, the constant multi-tiered ad approach is what makes playing so irksome, as you’re essentially never safe.

It’s weird, because Nitrome included a pretty cool mode on top of all of this madness — an endless gametype. Here, players are free to engage in all the hopping they want, sans ads, without limited lives to worry about. Along the way you can accrue lives of your own without having to watch videos. It’s a neat way to get people back into the swing of things after losing in any given stage, but when juxtaposed to the aggressive ad campaign, it loses a bit of its luster. You can remove ads for $3.99, but that’s a tad pricey for what you’re getting.

Gopogo is a great hardcore game bogged down by a questionable monetization scheme. I had a lot of fun learning its ins and outs, but after being bombarded with ads throughout I had to take a break.