I’m so glad that so many old school conventions are still commonplace in this industry. Tons of retro genres are seeing a resurgence, particularly roguelikes and adventure titles, and a lot of them end up on the mobile platform, bringing the meeting of old and new full circle. Tales of a Viking: Episode One ($0.99) has a few fundamental flaws for sure, but it handles grid-based combat with more grace than a lot of its competitors.

After a quick damsel in distress setup, our Viking hero is off to confront various forms of evil by way of a giant hexagonal board. Players simply need to tap a piece of the grid to move there, automatically attacking it’s adjacent inhabitants. The key is navigating in such a way that ensures a surgical offense while maintaining your health pool.

It sounds easier than it is, mostly due to the fact that your health carries over from level to level, so each hit counts. It’s a balancing act, as each stage bestows a gift that you’ll need to choose from, which affects the rest of your entire run. You can increase your hearts, restore them, expand your inventory, or buff an ability. Obviously, the better you do earlier on the more benefits you’ll reap later. While the learning curve is relatively low, Tales is rather unforgiving as a whole, mostly because of this system. 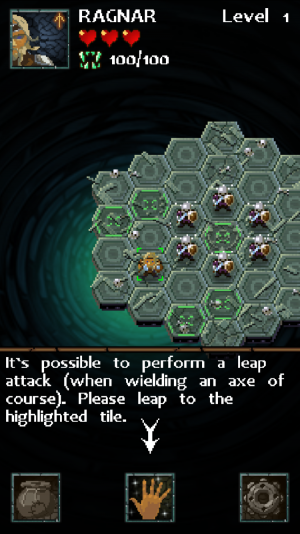 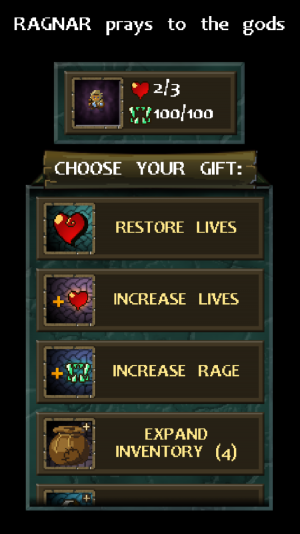 That said, it also allows you to play to your strengths. Players have access to a ranged throwing axe, a leap ability, and a push move that lets you nudge enemies off of a cliff. All of these come in handy as you brave the depths of the dungeon at hand, and slowly start to take on new foes, like archers, and engineer-like bomb chuckers — the latter of which operate on a delayed fuse. Many more layers also come into play as time goes on. You’ll have to manage your Rage meter, which is essentially your MP to spend on skills. On top of that, said skills are often linked to a cooldown, so you’ll need to use everything in your arsenal to succeed.

This goes double for environmental factors, like tempting treasure boxes in the wild that may yield short term gains (health potions) or useless items. I really like that when you finish a map that you’re free to explore it before moving down to the next floor — it’s a little touch that makes the game a little less frustrating. If all of this talk of potions and leveling up has you worried about predatory IAP, don’t be. It’s a small download that I was able to run without any sort of technical issues, and what you buy is what you get.

The “Role" part of that RPG moniker is a bit underplayed though, as you’ll only get a few frames of exposition every 10 floors or so. The initial event that sparks the story isn’t all that interesting to begin with, and kind of sets the tone throughout. Just don’t expect a whole lot in that department, especially when coupled with some rough translations. If you’re a strategy fiend though, Tales of a Viking will be up your alley. It’s easy to pick up and manage, and despite a stark difficulty spike, it’s fun to play.