It’s often said that in game development, ideas are cheap. What that means is that everyone has ideas for games, but actually bringing an idea to the finish line and creating an honest-to-goodness final product requires a lot of hard work and dedication from people with particular skills. I think it’s not so much meant to say that a good idea is worth nothing, just that it’s easier to come up with a decent idea than it is to actually make it. Good ideas are still an important part of any great game, and every once in a while, someone has an idea so good that it can carry entire games or series. Such is the case with Scribblenauts, previously seen on iOS in the form of the best hits-style Scribblenauts Remix ($0.99). The game has plenty of rough edges, but the idea behind it is 100% solid gold. More stunningly, developer 5th Cell was able to largely realize that golden idea, and were richly rewarded for their efforts.

The basic premise of Scribblenauts probably doesn’t need an explanation, but just in case you’re new to it, the idea is that you have a magic notebook that can create any object you write in it. Some exceptions apply for licensed properties, proper nouns, and of course, vulgarity, but outside of that, the game will recognize almost any noun. You then use these objects to solve puzzles in various stages, with the goal being to earn all of the Starites given out as rewards. There are lots of ways to solve each puzzle, limited only by your effort and/or imagination. The wild schemes you can pull off are impressive not only in that the notebook will recognize the bizarre things you imagine, but also in that those things will behave more or less as you expect they would. It feels like honest-to-goodness magic the first time you play a Scribblenauts game. Ideas with that kind of power are genuinely rare. 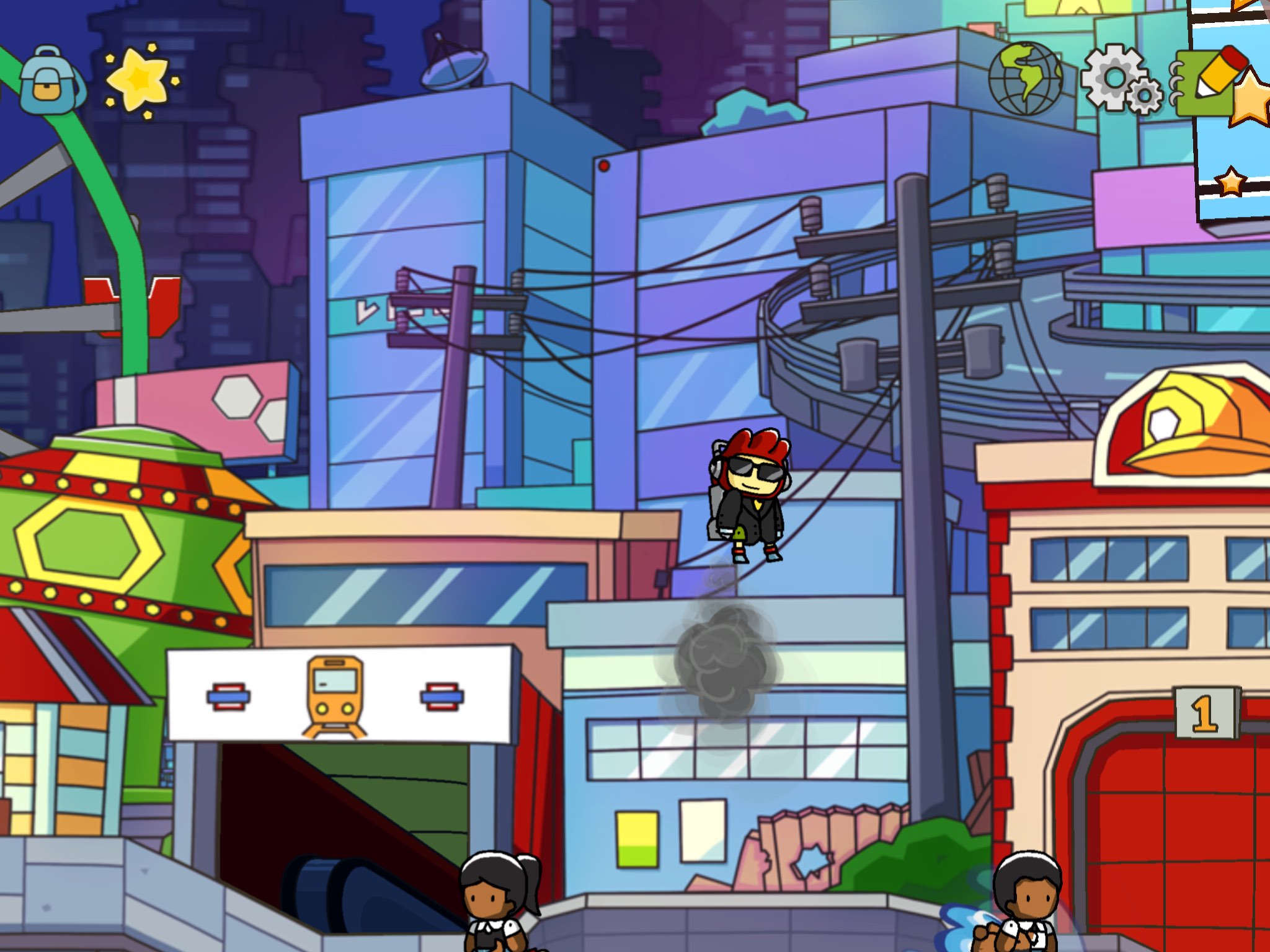 Solving puzzles in Scribblenauts is a fun enough excuse to use the magic notebook, but most of the game’s punch is in its toy-like properties. That makes following up on it tough, because you can’t sell the same magic trick twice and get the same effect from the crowd. Super Scribblenauts, the second game in the series, had a game changer in the form of letting players use adjectives. It wasn’t as exciting an idea as the initial concept, but the applications of adjectives in the game easily helped it overshadow its predecessor. Unfortunately, that’s the last real firecracker idea the series has seen. The two other releases since then have added in some licensed material and a more traditional game-like structure, both of which were welcome but not terribly thrilling.

Scribblenauts Unlimited ($4.99) is a port of one of those follow-ups, 2012’s Scribblenauts Unlimited, initially released on Wii U and 3DS with a PC release coming the very next week. As you might expect from the specs of those various platforms, the 3DS version was stripped down in a few ways to fit the tech, and it’s that version that the iOS port appears to follow from. That means the biggest mechanical addition to that installment, the object editor, is not present here. Thankfully, this version does feature the story elements and the hub-and-spoke style level design common to the other ports, so it avoids being a complete retread of Scribblenauts Remix, but only barely. 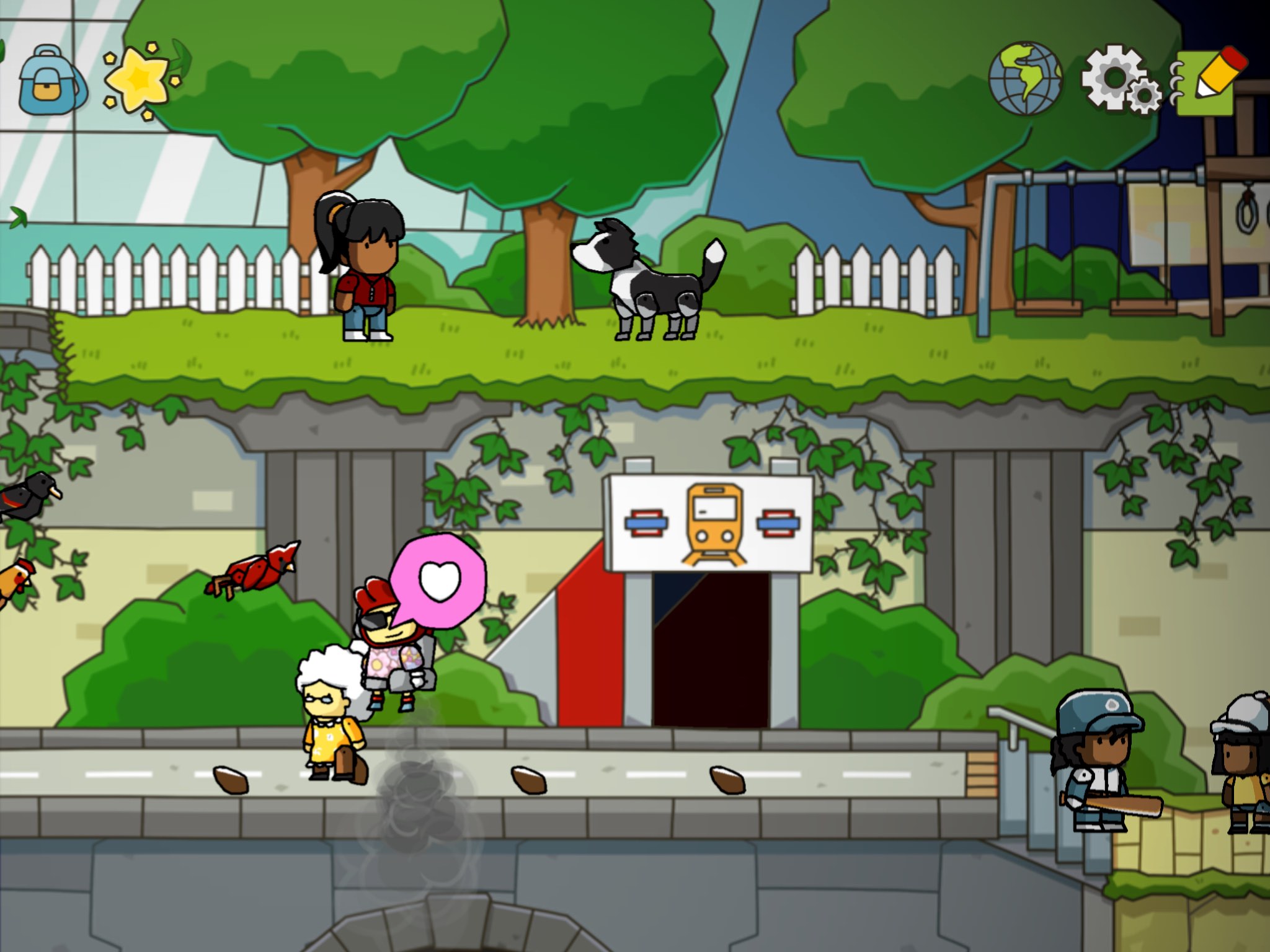 It turns out that Max, the protagonist of all of the games to date, is a bit of a stinker. He and his sister liked to play tricks on people using the notebook until one day they pick on the wrong person. Max’s sister is cursed to turn into stone, and the only way Max can save her is by collecting Starites. If you needed a narrative reason to play Scribblenauts, well, you’ve got one now, I suppose. Starites are located all over the land. Most of them are in pieces, but you’ll come across whole ones here and there. The world is divided up into areas that are connected to one another, so you can actually move from one side to the other if that’s your thing. Once that gets old, you can just use the map to quick travel around to wherever you need to go.

Each area houses a variety of challenges you can take on, most of which happen right in the level itself and award you a Starite fragment. Some of the challenges will take you to a discrete instance of the level and have you accomplishing multiple tasks in exchange for a whole Starite. As you gather more Starite pieces, more parts of the map will be open to you. You’ll also get the occasional cut-scene to move the plot forward, but those are brief and fairly forgettable, so don’t worry too much about it. As for the challenges themselves, not much has changed since the last game. Most of the time, you’re filling requests in one form or another, while other times, you have to figure out how to navigate some obstacles safely. So long as you have a functional imagination and a decent vocabulary, it’s an awfully easy game. It makes sense, because kids love this series, so it wouldn’t make a lot of sense to cater to the small percentage that want the Dark Souls of Scribblenauts. 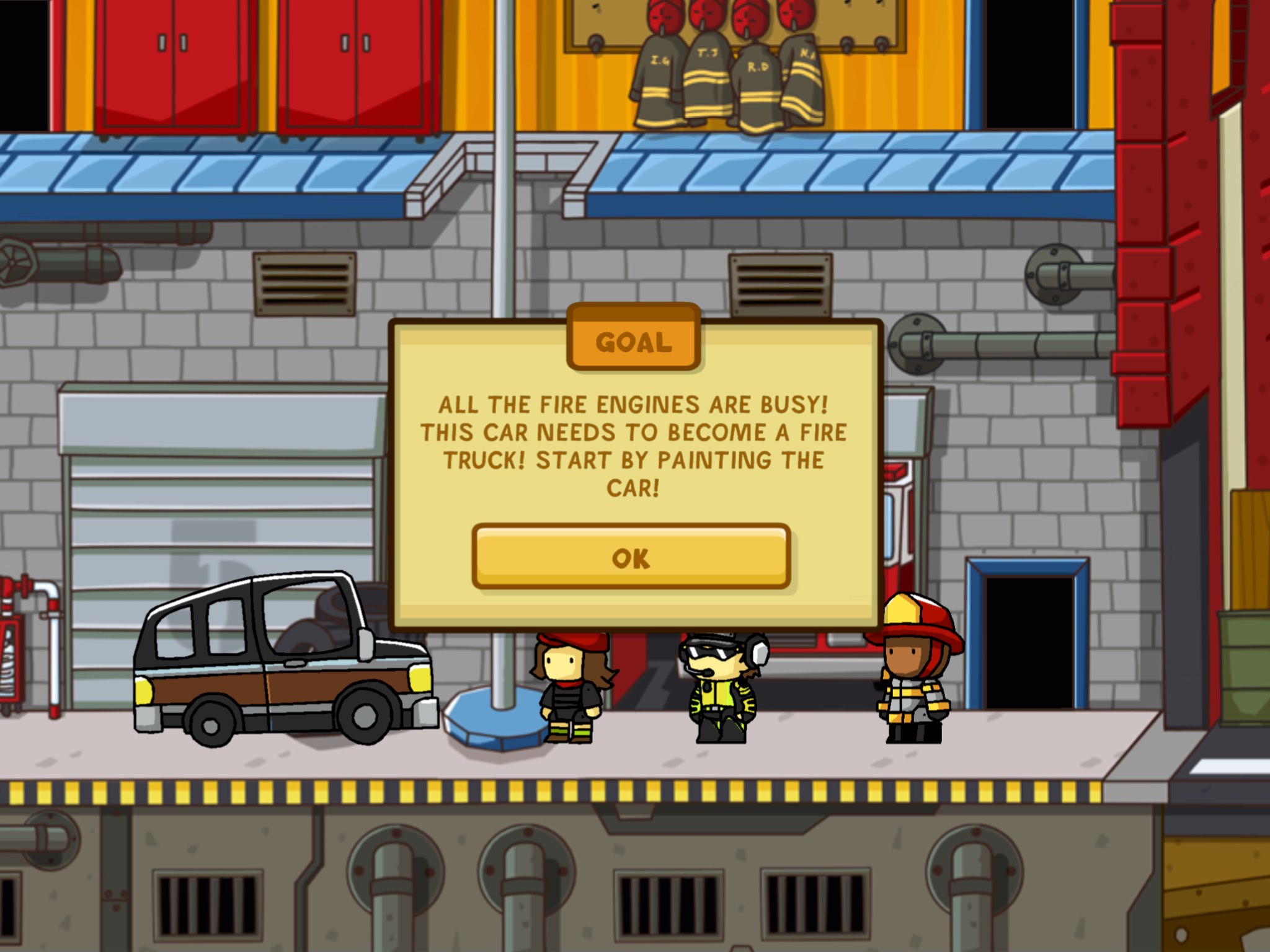 Because of that respect, however, the game can get pretty boring. You really do have to make your own fun in Scribblenauts to get the most out of it. Puzzles can largely be solved in a straight-forward fashion at no penalty, so if you don’t force yourself to be creative, you’ll rarely have to go outside of a box of 10 – 20 useful objects. I guess the main problem with this is that you can get most of the same enjoyment out of Scribblenauts Remix. I don’t mean similar, I mean the same. There are only so many ways to set up a puzzle in Scribblenauts, and both Remix and Unlimited allow you to stretch your imagination equally. That makes Scribblenauts Unlimited more of a game of giving you new excuses to mess around with the mechanics rather than something that provides new gameplay experiences. The frequent updates to the previous iOS game mean this release can’t even fall back on being an updated experience with support for features that came after the release of Scribblenauts Remix. It’s just a new playground, more or less.

Speaking of playgrounds, let’s talk about the IAPs. For the initial price, you get all of the stages and full access to the game’s features. There are additional IAPs for avatars and extra playgrounds, which are basically just new backgrounds to mess around in, sandbox-style. I think that’s fair, since this version is priced so much lower than the other versions while containing essentially the same content. A few cosmetics are a small price to pay for getting nearly the full Scribblenauts experience for a song. This is a solid port of the game, and I can’t say I have any particular issues that are specific to this version. 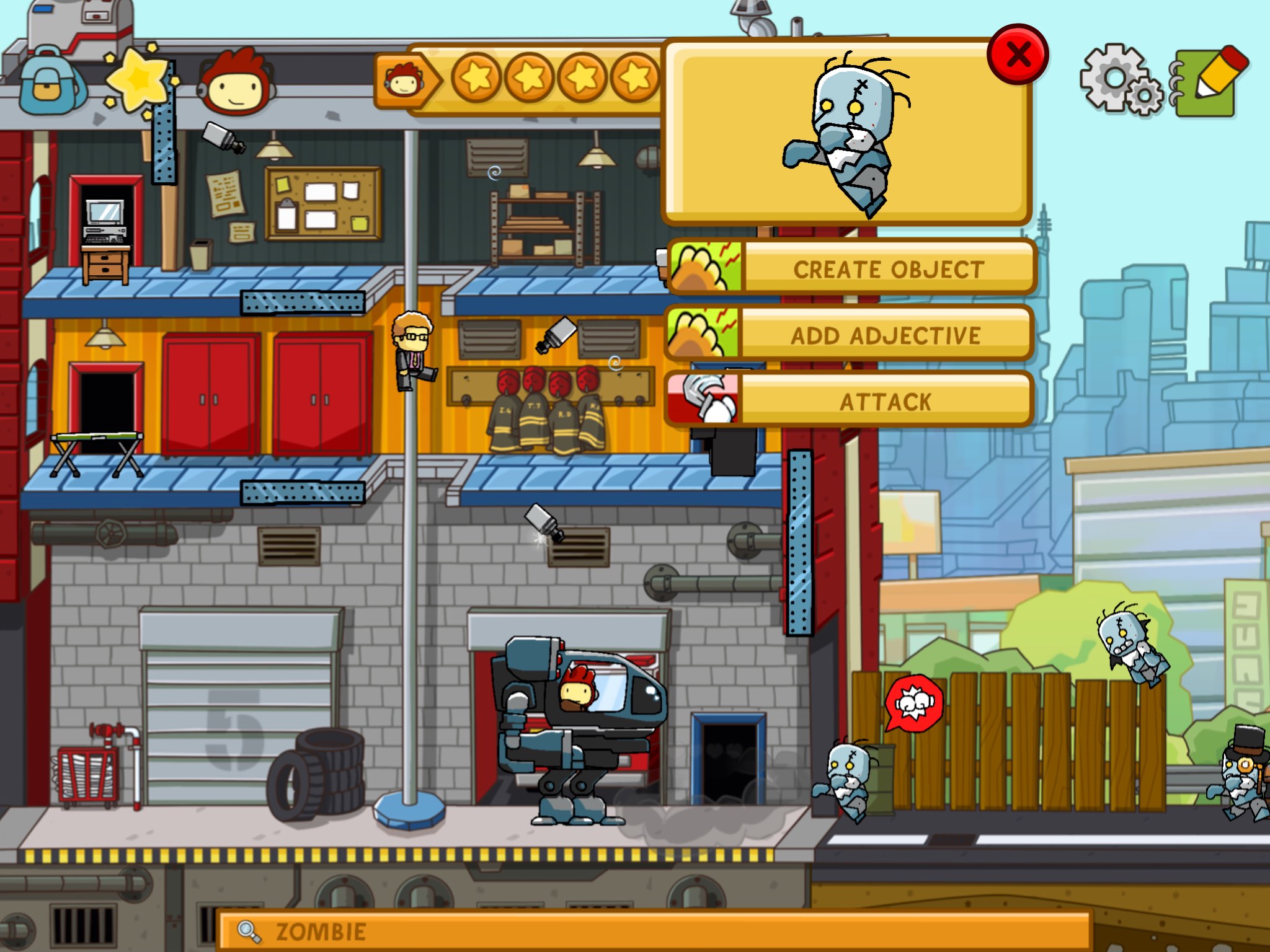 Thanks to the cleverness of its core gameplay concept, Scribblenauts Unlimited is an enormously enjoyable toy to play with for a while. The possibilities are mostly limited by your own imagination, and it’s a lot of fun to just generate weird things and see how they interact with each other. The problem, I suppose, is that all of that is equally true of Scribblenauts Remix. If you haven’t seen this game’s trick before, I strongly encourage you to give it a try. On the other hand, those who exhausted the previous game might find this latest one to be too much of the same.