I like roguelikes, don’t get me wrong. I like the replayability that comes from their procedurally-generated structure, and I enjoy the challenge. I’m having a ton of fun right now with Rust Bucket (Free) from Nitrome, for example. But sometimes I think there’s a value that comes from level design, of having an experience that was deliberately designed by someone. Thus, while Into the Dim (Free) looked like a roguelike, and has some of the hallmarks such as the turn-by-turn basis and the bumping into enemies to attack them, the game’s fixed nature helps make it stand out among a sea of roguelike dungeon crawlers. 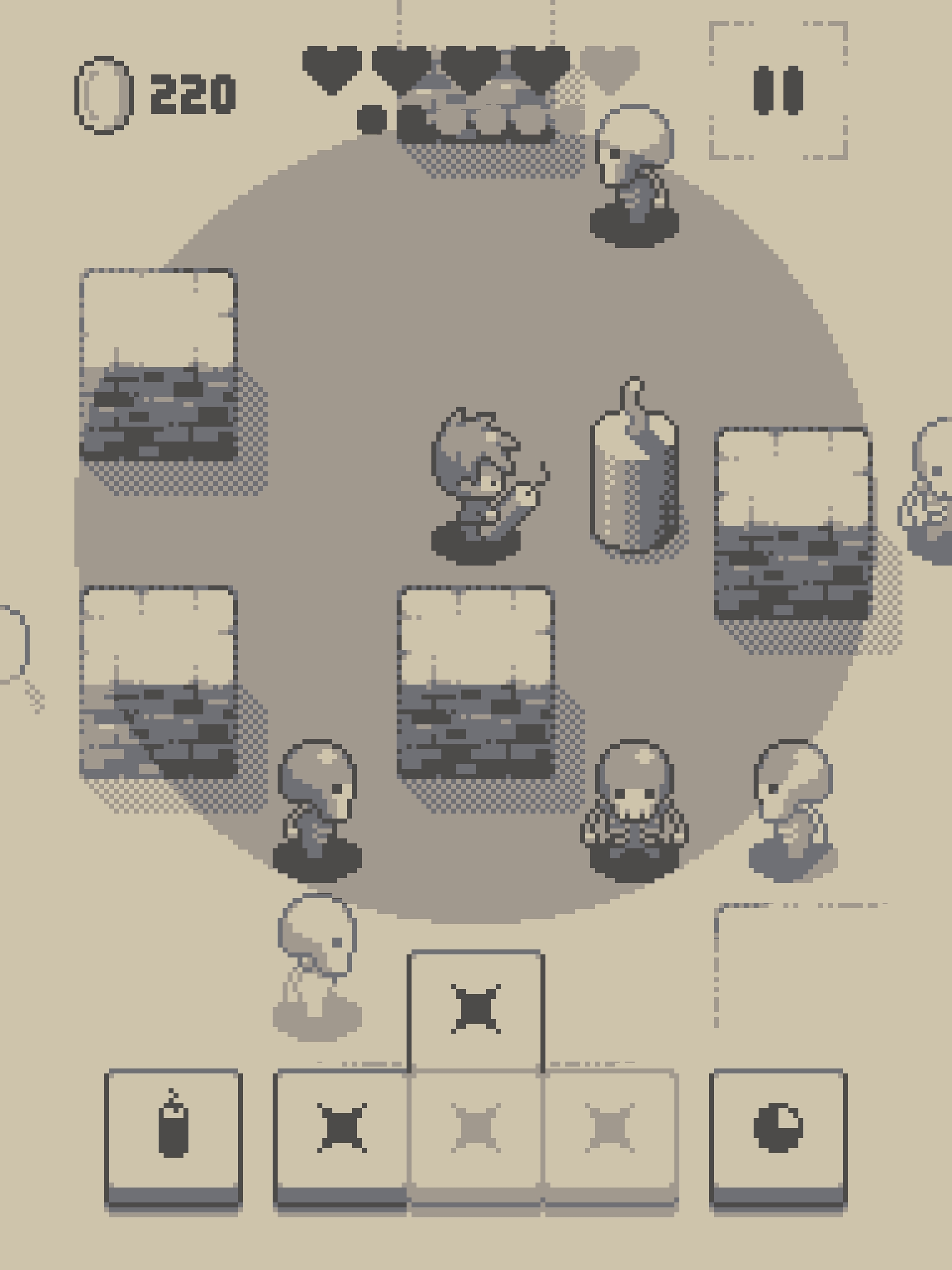 The first thing you’ll notice about Into the Dim is that the game uses a very different turn system. You start off with 3 move tokens, with each step or attack using a move in your turn. Then, the enemies move. This system takes a bit of adjusting to in terms of how it works, and you need to learn how the enemies operate, as well. The moments when a skeleton punches you to death will be frustrating, but they’re just part of the learning process.

Into the Dim can be rather brutal, but it’s the kind of game that’s fair. The enemies aren’t entirely predictable, but they have rules that you can exploit, and you have advantages you can take over them. For example, your gun has a limited amount of bullets, but you can fire at enemies off-screen and know if you hit something. If you miss, well, there’s no spiders in the distance that will come and spit at you and poison you. Everyone is set to the same turn rules, so you should know if an enemy can pose a mortal threat to you or not.

While you only have a limited ability to see past your immediate vicinity and enemies have some random behaviors, this is definitely a game where you can learn how to do well at it and master it. Though, that’s not easy, because enemies will punish you for missteps and bad decisions, and you’ll have to learn how to survive them. It’s not easy to do, but you can get better at Into the Dim. Part of that is the level-based design, where you can learn the layouts and start to master them. But the game also constantly tests you and throws wrinkles into the equation with the special levels, that require you to be extra-thoughtful. But eventually, you’ll feel so good at the game that you can defeat yetis without being frightened of their immense strength. 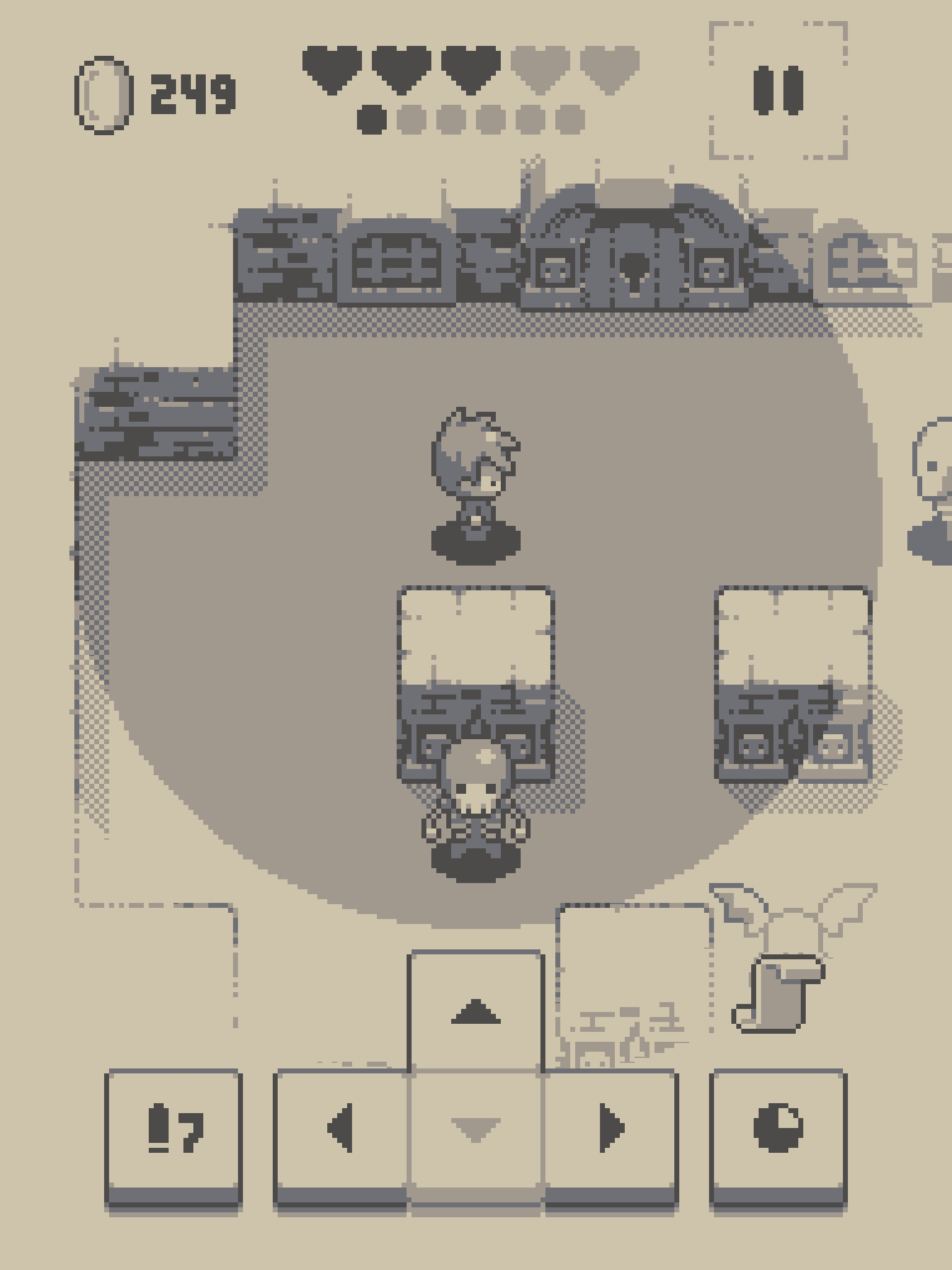 To be fair, it helps when you have an upgraded set of health, turns, and bullets. The coins you collect can go toward buying these, with wait timers for the upgrades to be applied. The prices are out of whack, because you can pretty easily max yourself out by playing the game and completing the optional puzzles for large amounts of coins. Having the max 5 hearts and 6 turns does help a lot. You can buy additional coins, but you can avoid ever needing to buy them as long as you don’t spend money on additional health and bullets or on skipping the wait timers. Honestly, it’s best to be patient for the wait timers, and to refill your health and bullets by replaying earlier levels.

The design does feel a bit haphazard at times because of the wacky expenses, and the placement of some of the items, where even on later levels you can earn plenty of bullets and health by picking them up in levels This feels a lot like a game where the developers said “Well, what great ideas can we put in here?" without necessarily asking if those ideas were for the best. Like, the game’s endless dungeon (which unlocks a bit too late in the game for you to properly use its coin-grinding properties to your advantage), which replaces your gun with dynamite that works like Bomberman‘s bombs. Yes, the game suddenly goes from dungeon crawler to endless survival Bomberman, which seems like a great idea that I’m surprised no one has made a good prominent version of. Well, I suppose Happymagenta just did. Honestly, a standalone game based on that endless mode would be really fun.

On the whole, everything that makes up Into the Dim feels kind of sloppy, but that doesn’t stop it from being a clever little dungeon crawler. It plays a lot differently from other games in its class, has solid Game Boy visuals, and will really test you. Plus, it’s free with some weird economy decisions, but you don’t have to be too clever in trying to outwit this one. I recommend giving this a shot.