Nitrome’s Rust Bucket (Free) is a really fun turn-based roguelike, it’s just not quite complete yet. Sometimes it’s unfair to compare one game to another, but comparing Rust Bucket to Ending ($1.99) is a totally fair comparison because the designer of both games is Aaron Steed, who also worked on Turnament for Nitrome. So, what you’re getting is a game that’s an evolution and refinement on those games’ formulas. Standard turn-based roguelike rules are in play here: you move one square at a time, then all the enemies take their turns, all according to various predictable rules. The challenge comes in when you’re trying to survive among several groups of enemies, where one hit kills you. It’s tough but fair. 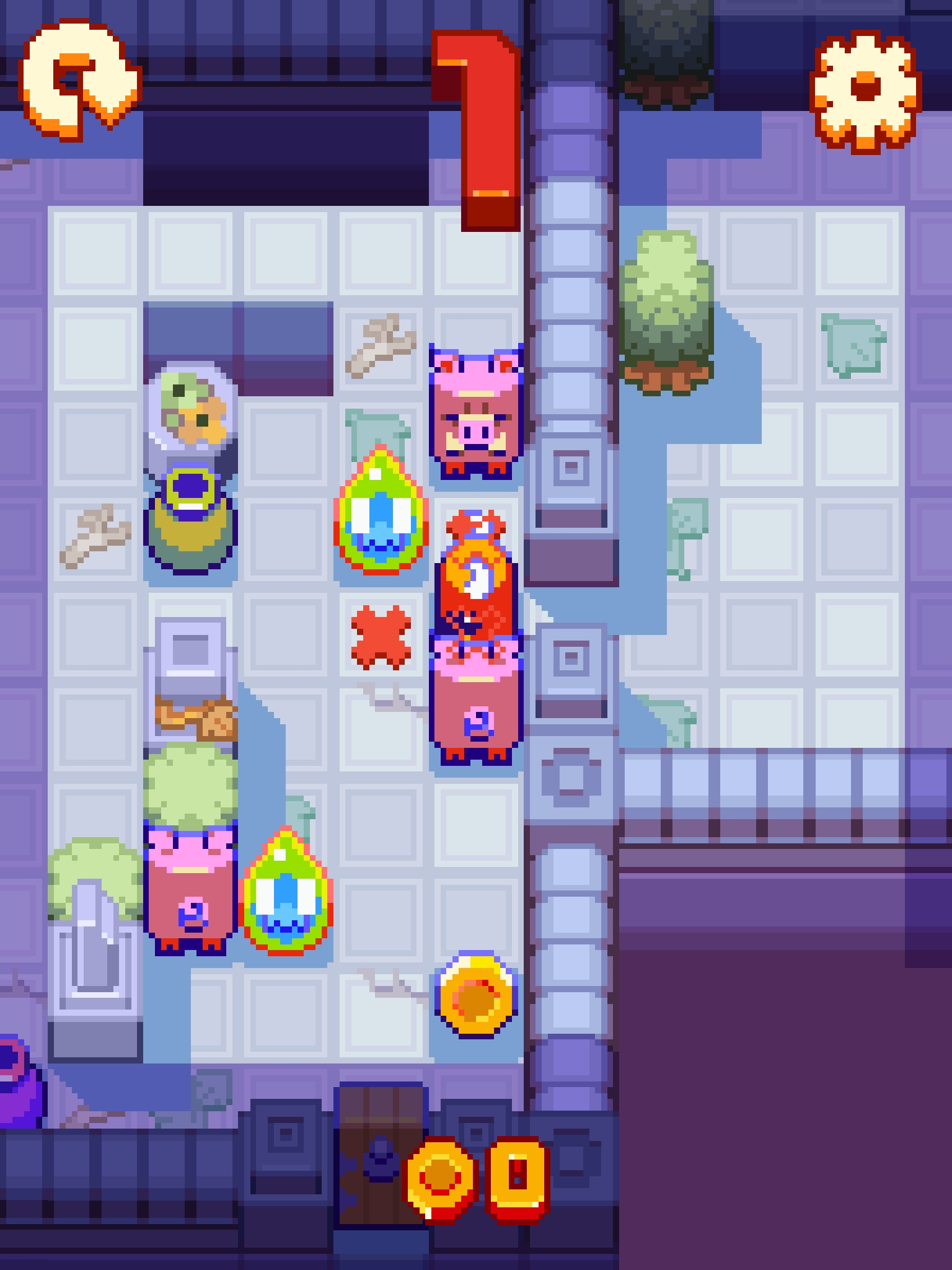 Rust Bucket starts you off with a tutorial campaign that really is its own thing, and not an overly-guided “teach you how to play the game without letting you feel how it all works" experience. You have to learn how the rules and enemy patterns work within the confines of the game itself. Thankfully, the tutorial tests you pretty well to where you should know how all the systems and enemies work by the time you complete it. It’s actually a worthwhile endeavor to play through this, and genuinely fun! Unfortunately, that’s it for now as far as fixed content goes.

The endless mode of Rust Bucket thus serves as the heart of the game, and it will test you. It will put you through your paces, chew you up and spit you out. You might think that having only a few enemies with a few simple rules would be easy enough to manage. Nope! With having to deal with all the enemies on screen, and multiple ones at a time, you will have a difficult time doing well. That the game also has a draconian scoring system, where getting a point requires making it to the next golden door, doesn’t help either. It feels a lot like Flappy Bird in a way, where you feel like you should be doing better, and there’s perhaps some progress made in the space between the two integer scores, but close only counts in horseshoes and hand grenades. 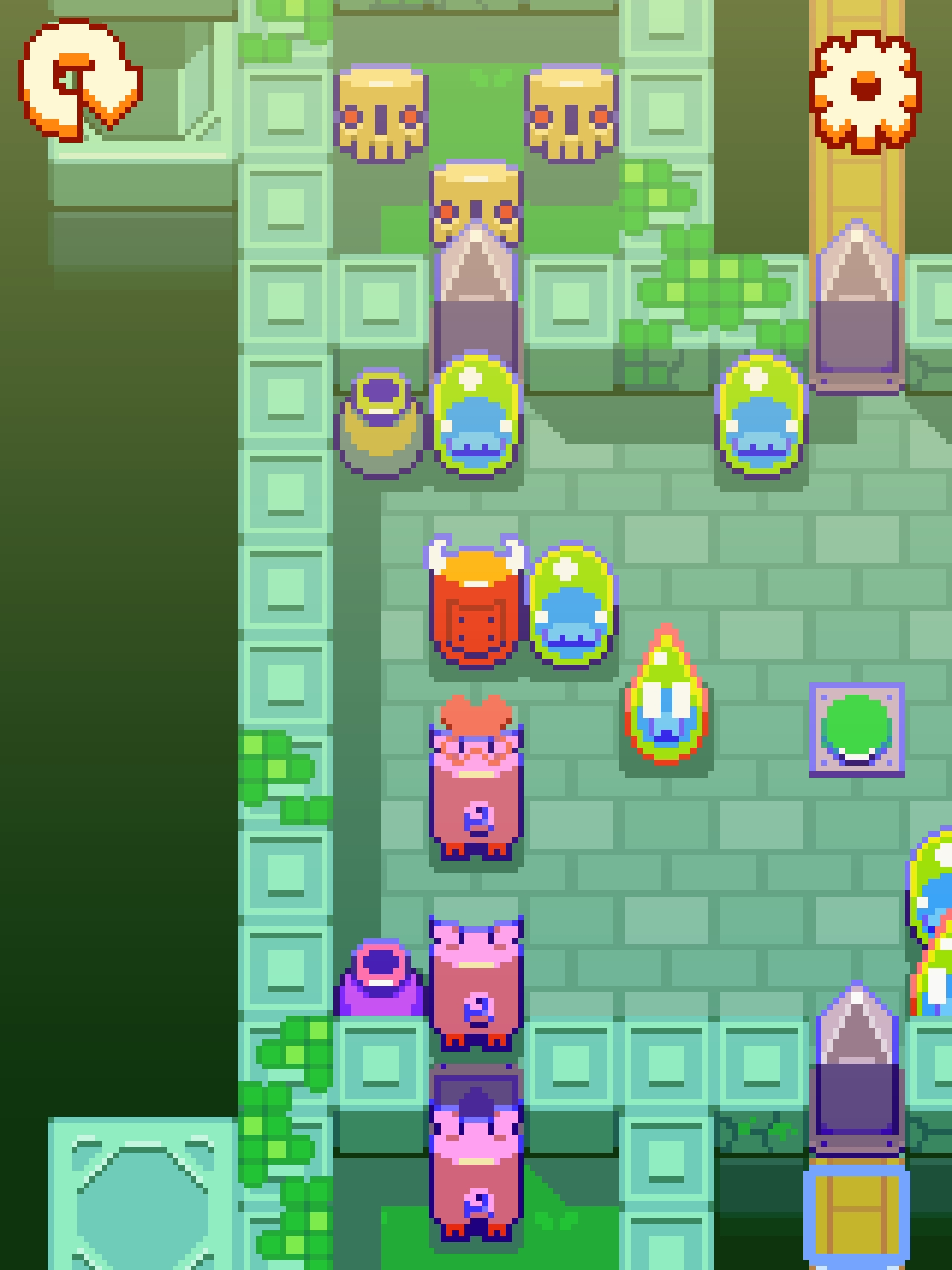 If you found Ending to be a tough sell because of its more esoteric nature, you’ll really like Rust Bucket‘s presentation a lot better. Having recognizable enemies as opposed to the weird shapes, though those shapes did at least indicate where they were, and where they would bop you! Still, you can learn how the limited selection of enemies here work, and the game does provide helpful “move here and you die" indicators. Even just the world being so vividly colorful makes the whole thing feel more engaging, at least personally. The sparse and spartan style of Ending works for it, but I enjoy the saturation here. Nitrome makes gorgeous games, and they made another one.

And beyond even the pleasing pixel art comes some great production values. Movement feels solid, with swipes working very well to move you in the direction you need to go. Hitting enemies has a satisfying impact to it, thanks to the screenshake and the chunks of your enemies that explode around where they were. It’s not a gory thing, at all, though. Even busting pots and doors feels good. Making the core parts of a game feel good is so crucial to a good game – doing the core actions that you’re going to repeat endlessly should feel good, and like something that you are satisfied doing over and over again. Rust Bucket nails that.

The only real problem, albeit a substantial one, with Rust Bucket is that it feels like an incomplete game at this point. The endless mode is fun, yes. It’s really fun, and really challenging, and will give you good enough reason to come back to it again and again. But comparing this to Ending‘s levels, it feels like something’s missing here. And the “coming soon" indicator on what looks like a level select icon does suggest some fixed content is on its way. And given how smart the game’s design is, and the tastes of design in the tutorial campaign, seeing some fixed challenges to play through would be remarkably welcome in the coming weeks. I don’t know if the game was put out without levels to get it out ahead of the iTunes freeze or not, but it does feel like the game loses a little something by not having these levels.

As such, I suppose Rust Bucket‘s evaluation could be considered more incomplete than anything. I mean, what’s here is a ton of fun. The tutorial campaign is designed in an intelligent way that’s still fun and doesn’t feel overbearing. And the endless mode is such a brutal challenge, but the game is still so accessible, that it feels quite playable in the way that Flappy Bird was. There’s 5-star potential that Rust Bucket can still reach, but until then, this game has to settle for being merely very good, though it could be one of the best roguelikes on the App Store at some point.