As much fun as they can be, at the end of the day, most pieces of interactive fiction have stories that are good for games. That’s the nasty little asterisk that reminds the player not to expect too much from the story, that it has sacrificed literary merit in exchange for getting the reader’s input at frequent points throughout. It makes sense, if you think about it. Writing a great story is like making a great painting. The words are the strokes on the canvas of the page, and, ideally, each one will be carefully chosen to serve a purpose. Good writing is hard, in other words. An interactive story magnifies that difficulty greatly, as you now have to create hundreds of similar but equally great works based on how the player decides. Then you have to deal with the expectations of the audience, who generally want lots of action and a brisk pace, preferably with elves or aliens. I love the genre, but mostly because of the fusion of choice and narrative. If you handed me the stories on their own, I’d probably be considerably less thrilled with many of my favorite gamebooks.

I would happily read A Study In Steampunk: Choice By Gaslight ($3.99) even if it were a normal book. It’s riffing on other popular works, in particular Sherlock Holmes, but it’s doing an utterly fantastic job of it. The steampunk setting is a bit well-trodden in fiction by now, but it serves its purpose well as a way of twisting a very familiar story in an interesting way. Best of all, it takes its time to deliver its plot, throwing bricks in the air that won’t land until you’ve almost forgotten about them. The main characters are well-written, and depending on how you make your decisions, you’ll get to love or hate them in surprisingly authentic ways. It’s a long story, but not an inch of it is wasted. Even the slow moments are there to magnify the impact of the exciting parts of the story. It also pulls off the tricky task of being both a collection of short adventures and a satisfying single story at once. 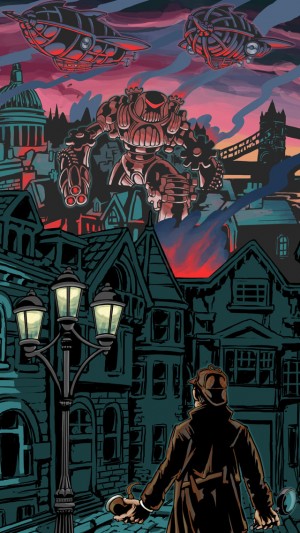 In this tale, you take on a Watson-like role, but you’re not exactly Watson, just as the Holmes proxy isn’t exactly Holmes. You and your perceptive partner are government agents serving the country of Mercia in the late 1800s. At the start of the story, you’re given an interactive glimpse into your main character’s past as a soldier in a bloody war with another nation. They follow the old way of life, with a powerful religion and what appear to be monsters who can drain the life from others with a touch. Your country has forsaken the old religion and become the picture of modern technology. The war ended in a truce of sorts, but tensions remain high. On top of that, the lower class of people in Mercia seem to be feeling discontent, and then there’s the small island that is technically part of Mercia but has no great love for its ways and government. It’s a powder keg waiting to blow, and thanks to your job, you’ll be right in the middle of it no matter what happens.

A Study In Steampunk doesn’t follow the stories of Sherlock Holmes in obvious ways. Instead, it goes for the feel of the adventures written by Sir Arthur Conan Doyle. And of course, with the player guiding the partner character, things can go very differently if you choose it to be so. You would expect the choices to be narrow or stifling given the strong narrative focus, but you end up having a great deal of input on your character’s behavior and the story in general. Depending on where you poke around, you might find allusions to other great works of fiction, as well. There are parts that can feel like vintage horror, supernatural and unsettling in the manner of Bram Stoker’s Dracula. The steampunk setting means you’ll be seeing plenty of airships and mechs, giving a weird science-fiction vibe to parts of the story. There’s even a little James Bond in here, mostly found in interactions with your commanding officer, Woodward. You might find all of that, or you might find very little, depending on what you do.

I should mention that this is a very long game. It’s about two to three times as long as the average release from Choice Of Games, which is part of the reason why this review is coming well after the game’s release. Every time I expected the story was heading for an ending, something new would come up and another adventure would be at hand. In hindsight, I can see exactly how the story was meant to flow, and you know what? It earns its length. It’s not wasting your time. Every story beat is part of the foundation of the game’s impressive climax, in ways that you might not even notice until the pieces finally lock together. When it all comes together, even parts of the story that seemed to serve little purpose show their true nature. It makes you want to go back and play it again to see how different choices would have affected the outcome, too, which is precisely the sort of thing a gamebook ought to aim for. 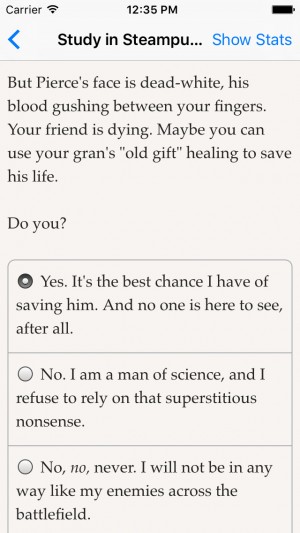 The moral choices are ambiguous. The good guys are kind of bad, and the bad guys are kind of good. In fact, the choices you make might entirely turn the heroes and villains on their ears. The romances come naturally and are used for maximum effect without overriding the main story. As usual for a Choice Of Games release, you can play your character as straight, gay, or bisexual, but for whatever reason, you’re locked into playing as a man in this one. It’s kind of strange, because looking back, I don’t see any particular reason why that had to be so, but it is what it is. I think the story works perfectly well as it is, but fans of the publisher’s other works will probably want to know about that limitation before going in.

Great stories will often help us understand some aspect of ourselves or the world around us. I would not have expected that from an interactive story about steampunk Sherlock Holmes, but there was a situation in A Study In Steampunk that made me realize something about myself that I hadn’t thought about before. Someone important to your character is in deep trouble, and the only way to save them is to do something they wouldn’t agree to on ethical grounds. They feel so strongly about it that they would rather die than receive such help. It’s a situation that has plenty of mirrors in modern society, and as I found myself selfishly doing everything I could to save that person against their wishes, I was a bit surprised. Both at how invested I was, and at how I was behaving. I realized I would probably do the same thing in real life, in spite of always thinking I wouldn’t. I’ll grant you, this was a completely subjective situation that might do nothing for you, but it was such a powerful moment for me that I had to talk about it somewhere.

My hat is off to author Heather Albano for her outstanding writing in A Study Of Steampunk. I always get into these kinds of games to an extent, but I’m not sure I’ve been this deeply moved by one in some time. It’s thrilling, emotional, bombastic, quiet, exciting, and fascinating all at once, and it manages such a range of colors simply by taking its time and doing things right. From a gameplay perspective, there are tons of meaningful choices here, a great deal of agency over the plot, and lots of fun nooks and crannies to explore on replays. This is without question the best Choice Of Games release since Choice Of Robots ($5.99), and it might just be my favorite of their entire iOS line-up.