Hello, gentle readers, and welcome to the RPG Reload, the weekly feature where we take a spin and play to win. Each week, we take a look at an RPG from the misty mists of the App Store’s past to see how it’s doing in the here and now. It’s a chance to revisit old favorites, to reflect on their place in the overall market, or just to take a deeper dive than our reviews typically allow for. As the king of this castle, I try to choose a balanced schedule from week to week, but if there’s something you feel like I’m missing, by all means, let me know. You can do that by commenting below, posting in the Official RPG Reload Club thread, or by tweeting me at @RPGReload. Since the current schedule is mapped out to somewhere like June of next year, you probably won’t see your suggestion soon, but I will add it to the master list. 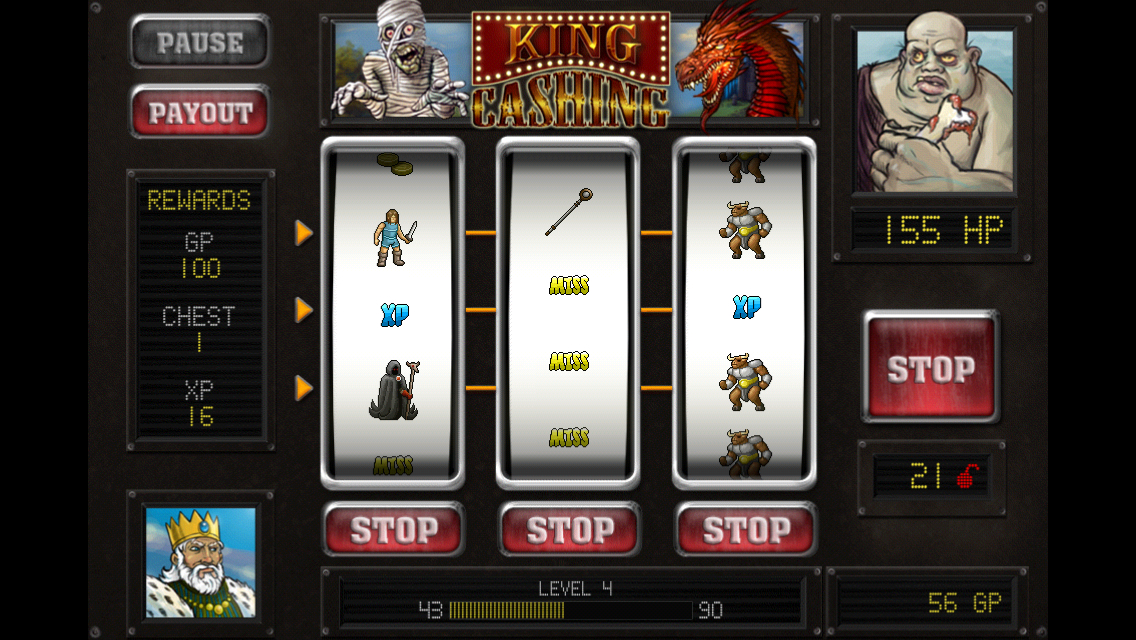 Just a couple of months ago, we featured King Cashing 2 (Free) in the RPG Reload. It was a last-minute replacement for a mistake on my part, as it was certainly my original intention to cover the series in order. But when Hallowe’en comes knocking, you have to answer the call, friends, and King Cashing 2 did just that. It might seem odd that we’re looking at the original King Cashing (Free) so soon after that, but in a way, it’s kind of a good way to go about it. The sequel is fresh in my mind, so it’s easier to see what exactly keeps the first game relevant in light of its more fleshed-out follow-up. On balance, the sequel is a better game, but that doesn’t mean it’s better than the original in every way. I will say at least that given the origins of King Cashing, adding in zombies for King Cashing 2 was a bit of a master stroke.

Developed by Productions Multimage and released in September of 2011, King Cashing was completely inspired by another game. Okay, that’s not that rare in the game industry, but this story is unique, I promise. One day, Nick Pollender, the person who would go on to design King Cashing, was playing Kairosoft’s popular Game Dev Story ($4.99), a simulation game that was a big hit in the App Store’s earlier years. The premise of that game has you running your own game developer, trying to make hit software and win awards. When you start a project in that game, you can choose the genre of the game you’ll make, eventually being able to pick more than one for each title. One of the games that came up when Pollender was playing was a hybrid RPG and slots game. Pollender got to thinking about how such a game would work, and King Cashing was born. The game was developed over the course of a few months by a fairly small team consisting of seven members, plus testers. 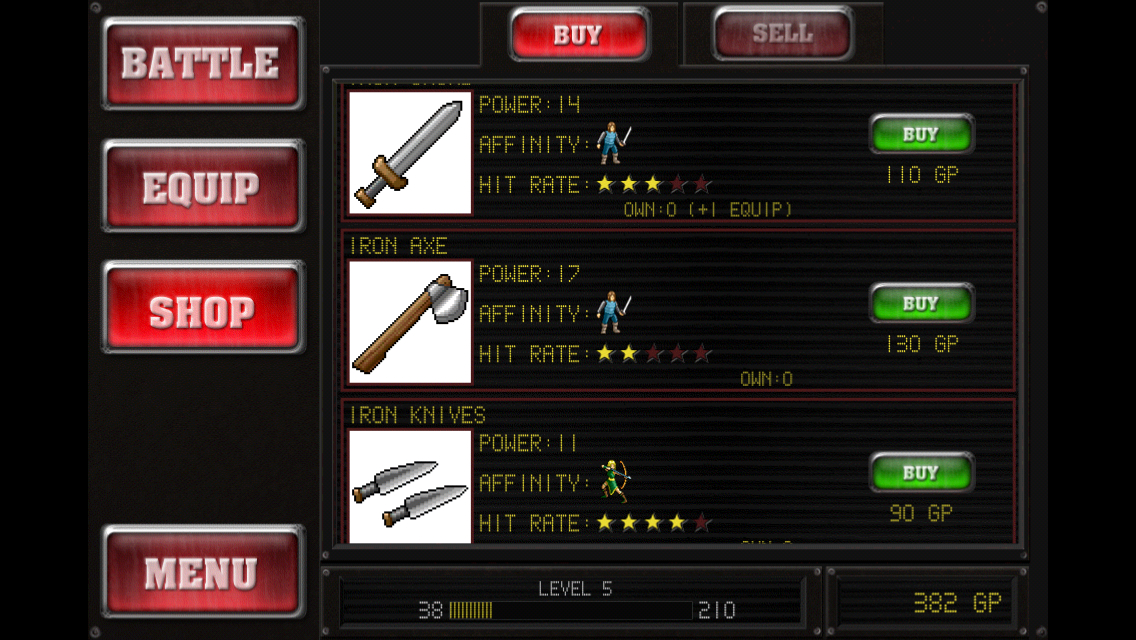 Nobody was sure of how such an odd concept would go over, but the game got a decent amount of attention and managed to at least break even. It was enough to convince the team to go ahead with a sequel, which did even better than the first but didn’t quite do well enough. You can go and read the RPG Reload entry on King Cashing 2 now if you haven’t already. We’re going to focus on the first game this time around. In some ways, it feels like a prototype for what the sequel would become, but I think it also benefits from its simplicity. In addition, it actually has a proper ending, so it has that on the follow-up, too.

The premise of King Cashing is simple. You play as a King who is stomping his way through the monsters that have invaded the countryside en route to eliminating the evil Dragon who sits in the Dark Castle. He does this not for honor or out of a sense of benevolence. No, he’s in it for the money, honeys, and he knows the Dragon is sitting on a big pile of it. Further underlining the kind of character the King is, he won’t participate in any battles, instead leaving the hard work to his peons. Said peons include fighters, archers, and mages, each of which is skilled with three different types of weapons. It’s not much, but it’ll do. 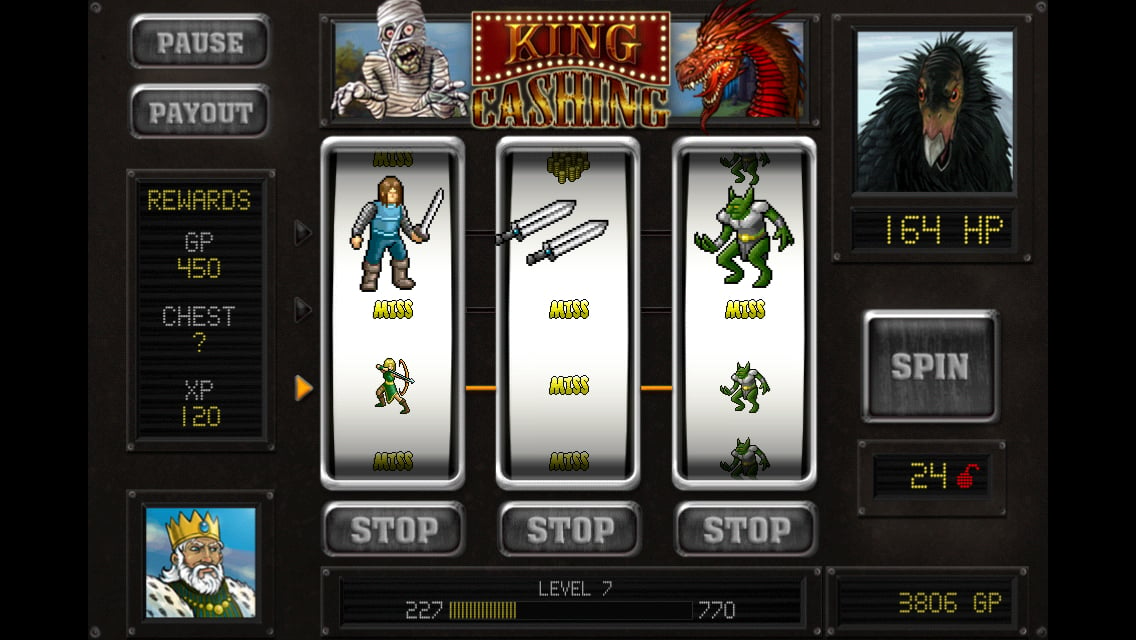 Each point on the map represents a battle. Most of the battles are mandatory, falling along the one road that leads to the Dark Castle, but there are a few optional fights along the way if you’re good enough to unlock them. The shop, once you’ve unlocked it, is accessible at any time outside of battle. It offers a regular selection of items along with a few random ones that change after each battle. The regular selection improves in quality as you play through the game, so you’ll be coming back to the shop fairly often. As for the battles themselves, you’ll be awarded gold and experience based on how quickly you can resolve them. You’ll have to ante up some cash to play each one, with the price determined by what ranking you’ve achieved in the level before. Unless you make a lot of mistakes or foolish purchases, you probably won’t need to worry much about gold for most of the game. Experience, on the other hand, has a less gentle curve, but we’ll talk about that after I discuss the battle mechanics.

Basically, the battles are handled through a slot mechanic. Each pull on the proverbial arm costs cherries, which act as your life points. The monsters don’t attack you, but if you run out of cherries before you reduce the enemy’s hit points to zero, you lose the battle and your ante. The slot machine has three reels. The first contains your stalwart attackers, the second whatever weapons you’ve equipped them with, and the third holds the monsters. The goal is to line up an attacker, a weapon, or preferably both, with a monster. Doing so will deal some damage to the enemy. Attackers and weapons alone will do a little damage, with heavier damage coming from combining the two, and critical hits being dealt by lining up an attacker with one of their weapons of choice. The reels will also be littered with other bonuses or obstacles depending on your set-up and the particular enemy you’re fighting. You can stop the reels all at once, or individually, so if you’re skilled at timing these things, you can increase your odds of winning significantly. 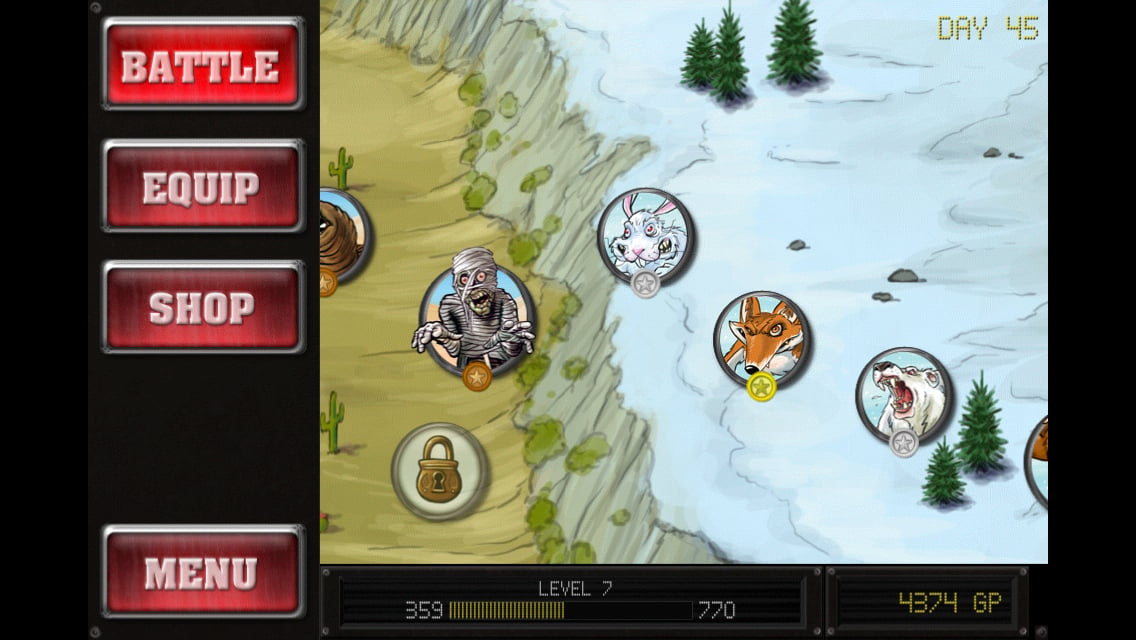 If not, you’re at the mercy of luck, but that will carry you quite far in this game if you’re persistent. You’ll occasionally run into a tough monster, and if that happens, your options are limited. You can either keep trying, hoping to get a lucky break against it, or you can grind up some experience points or gold for new gear. Gaining a level allows you to choose between increasing the level and damage output of one of your troop types or increasing your maximum number of cherries, effectively giving you an extra turn per battle. Chances are good you’ll be decked out in the best regular gear the shop has to offer soon after it updates its selection, so if you’re really stuck, there’s usually nothing for it but to grind. Fortunately, grinding is pretty brainless in King Cashing, as you can just find an enemy that you’re able to topple and sit there tapping while you read a book or something. This aspect of the game is at its worst in the Dark Castle, where the difficulty steps up a notch and enemy resistances become more frequent.

You can get by just fine by paying that much attention to the game, but for those who look a little closer, there are some interesting mechanics in King Cashing that perhaps don’t achieve their full potential in the course of the game. I like the way you have to choose between power and accuracy with the different weapon types, though in practice the difference in power will rarely make up for the decreased chance of hitting your target. Some of the enemies exhibit behaviors that push you towards particular weapons, which forces you to change your set-up if you want to run the best odds. That said, with the most interesting battles being optional and how easy it is to grind, I suspect few players will explore these strategic options in lieu of simply pursuing the next level up and the extra turn in combat it can bring. 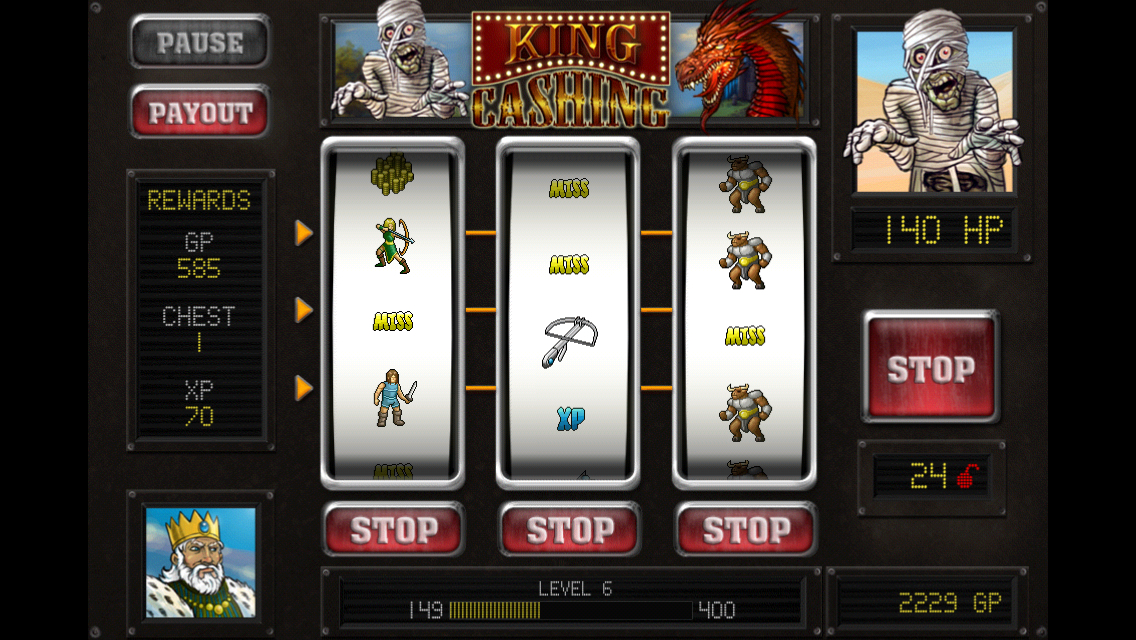 That’s another issue, actually. As already mentioned, you have your choice of improvements upon leveling up, but I’m hard-pressed to see the benefit in increasing an attacker’s damage output over having an extra turn in battle. Cherries do eventually cap out, as does your overall level, so you will reach a point where you have to choose the level-ups for your attackers, but I don’t see why you would until you hit that point. I guess that one’s for the gamblers out there. It speaks to the cleverness of King Cashing‘s design, though, that the game is perfectly enjoyable however you choose to come at it. The late-game grind can be a bit of a drag, and the game feels fairly bare-bones in some respects, but there’s a certain satisfaction to the slot mechanics that carries the game through its weaker patches.

King Cashing received a few substantial updates after its release, with the last one dropping in April of 2012. It added a survival mode along with some new bosses and items. The survival mode is actually pretty fun, basically seeing how long you can hold out on a starting purse of cherries and whatever drops along the way. The answer is usually “not long", but it’s a lot of fun and a sensible addition to the game. Unfortunately, that update predates the arrival of the iPhone 5 and other larger iPhones, so you’ll have to deal with some black borders if you’re playing on any recent hardware. The game still works just fine, though it’s hard to say if Productions Multimage will fix the game should it ever break. They are still an active company even if they aren’t making new original games, so it could happen, but I wouldn’t say it’s guaranteed.

That’s just what I think about King Cashing, though. What do you all think? Do you like the first or second one better? Do you feel like the existence of the sequel renders the first game redundant? I want to know, so please share your thoughts by commenting below, posting in the Official RPG Reload Club thread, or by tweeting me at @RPGReload. As for me, I’ll be back next week with a Very Special RPG Reload. Thanks for reading!