Rayman is one of those franchises that always lights my face up when I play it. Despite my issues with a few of the older games, the newer generation of titles have been nothing short of amazing, and I’m including both mobile runners in that conversation. Rayman Jungle Run ($2.99) and Rayman Fiesta Run ($2.99) were excellent translations of the formula to the mobile platform, and although they’re technically runners, they operate more like a platformer hybrid, and don’t sacrifice any of the quality that the series is known for. Rayman Adventures (Free) is more of the same in that regard, with several holdups inherently related to its free-to-play nature. 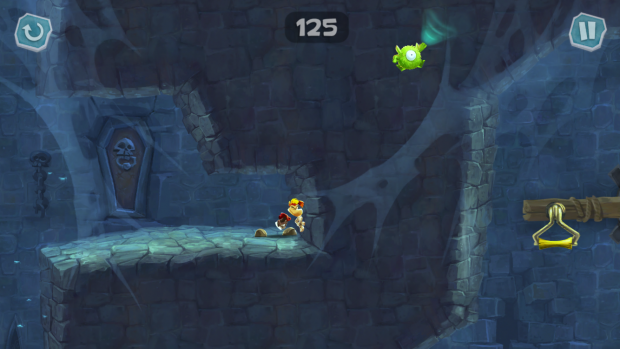 Yep, while the previous two mobile Rayman games were premium titles, Adventures is in fact a free-to-play game. This complicates things a tad, but the most important thing you need to know is that the amazing runner experience is still fully intact. Although Rayman moves on his own, players can easily manipulate his direction with a quick swipe, initiate an attack with a tap, and the same goes for jumps. It’s all very easy to control, and the framerate and visual style are just as charming as ever. If you’ve played the other games to death, you’ll feel right at home here.

The big gimmick this time though is that Rayman and crew will have to rescue cute little critters called Incrediballs, who will in turn allow a giant tree to grow over the course of the game. The entire premise is hitched to these creatures, for better or worse. As each set of stages progress, you’ll slowly pick up more and more eggs. As they hatch, they’ll boost the tree as a metagame of sorts, and become available as part of your party. In essence, you can use them to discover secrets or provide buffs like shields and the like. They’re power-ups for sure, but the “collect them all" conceit makes them a bit more addictive in nature beyond their pragmatic use in-game. 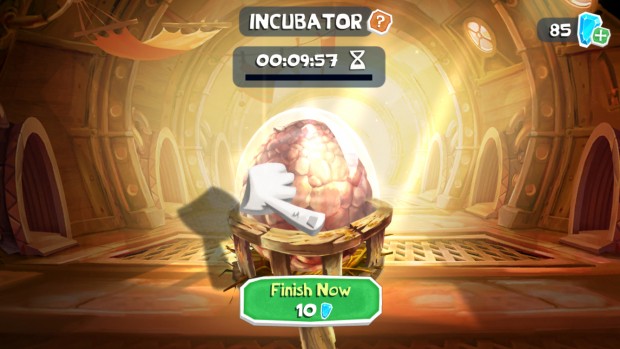 All told, the formula is perfect for mobile play. Levels only take a few minutes to complete, despite the fact that many of them are packed with hidden turns and secret areas. It’s a nice mix, as most of the game requires skill to play, but it’s not so overwhelming that you’ll need to restart stages over and over. Having said all that praise, here’s where the caveats start to come into play. For one, timers are tied to eggs. This is significant because you need to wait for them to hatch before you acquire new ones, so the rewards are somewhat gated by time. Next, levels cannot be replayed — once you’ve left a certain area, you cannot return to it. Instead, you’ll journey onto a new set of levels on a new map. It’s a really odd decision that’s likely tied to the “ongoing infinite" setup to keep people playing, but I wish there was a way to at least save your favorite layouts.

The major takeaway though here that softens this blow is that there are no timers stopping players from actually playing the game. So if you want to keep running and enjoying yourself, you can, as there’s no proper energy mechanic preventing you from doing that. On the flipside, not hatching an egg will result in a major lack of progress, so completionists will no doubt feel obligated to wait to some degree. There are also superfluous additions that can be purchased with gems (both an in-game and premium currency) like costumes and temporary power-ups, but they’re just that — superfluous (though I should note that only Rayman and Barbara are playable right now, with Globox and a Teensie coming at a later date).

Despite some wonky design choices in regards to the monetization scheme, Rayman Adventures is still a perfect gateway into the series for beginners and Rayman fans alike. Since you’re free to actually play at your heart’s content, I don’t have a major issue with the system, warts and all. At the end of the day, the legacy that was established with the previous two runners is still intact, and I hope to see more in the future, albeit with the old pricing model.