There isn’t very much to say about virtual pets. We’ve all played with one at some point, whether it was a Tamogachi or a Clumsy Ninja (Free), and they all offer pretty much the same experience. They’re usually cute and also usually a bit shallow. So how do you direct someone’s attention to your virtual pet experience? By putting them in charge of one of the most destructive and incomprehensible monsters since before time was time, of course! And by making that elder god as cute as can possibly be, even as he eats his own servants because you forgot to feed him! Here’s the simple but amusing Cthulhu Virtual Pet (Free) from Silvia Sanchez and NeuroCreativa. 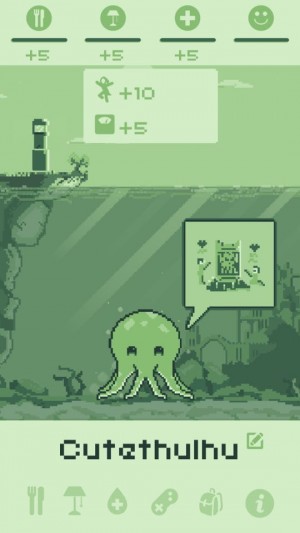 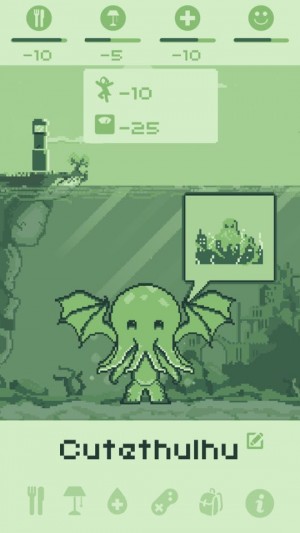 So you all probably know the deal. After invoking him back into waking existence, you have a little pet Cthulhu on screen and you need to keep him fed, happy, and healthy. You do this by feeding him fish, reptiles, or people, putting him to bed, cleaning up his doody, making him bathe, and using medicine if need be. Different foods affect his weight, and his favorite food has double the nutritional benefits. Additionally you can let him take part in various recreational activities. The usual owner/pet bonding activities like, oh… Sinking ships, destroying cities, invading the nightmares of witnesses, and making cultists pray to you in ancient rituals. Like I said, the usual.

As your Cthulhu grows from a baby to an adult, he’ll accrue witnesses. His overall power requires a large amount of witnesses; tens and eventually hundreds of thousands. If you don’t keep him fed and happy, he’ll start devouring his own witnesses. If he devours all of his witnesses, he’ll re-enter the deep slumber you initially invoked him out of, and you’ll have to start over with a new baby Cthulhu. If you let your Cthulhu get too sick, he’ll catch some kind of cosmic virus, and again, you’ll have to start over. So watching his health and weight is important. You want a Cthulhu around 50 tons. So as you feed him, make sure to make him destroy some boats or cities from time to time. You know. For exercise! 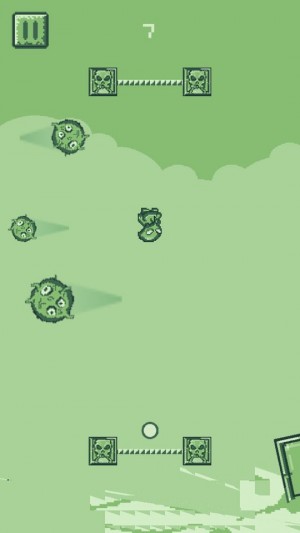 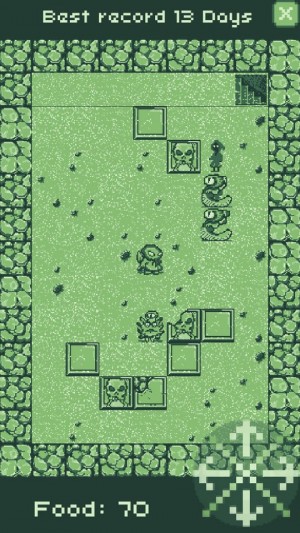 You also have 3 simple mini-games to play to get extra witnesses and pass some time. They’re all a little overly simple and usually a little buggy. The first is a roguelike in which you take a miniature Cthulhu through the sunken streets of R’lyeh. Each step depletes your food, and you’ll constantly collect more food as you go, eventually running into other eldritch horrors that you can’t seem to damage and must avoid. Another mini-game has you bouncing between two platforms and switching direction like you would in Gravity Guy ($0.99), dodging Shoggoths and collecting coins. You can intentionally glitch it and stick to a platform for a while by tapping just as you collide with it. The final game has a cultist crossing gaps by spawning a big plank. If the plank is too short or too long, he’ll fall to a watery, tentacle-y death. Your score is squared at the end to calculate how many witnesses you gain.

It’s all pretty simple and basic. The main issue I have is with the lack of any text on screen. It’s all just symbols and numbers. And what’s more, the help screen that describes what every icon means is actually a web page that you’re navigated away to. And the app has been updated several times with new icons and changes made to the user interface, as you can tell from the official screen shots and my own. Those changes haven’t been reflected in the help page yet. But the developer is constantly updating his app and is very communicative with his consumer base. Especially in the Google Play page for this game, where every other review seems to have a reply from the developer. Bless them, English clearly isn’t their native language, but they’re definitely making an effort. Everything is simple enough that you can figure it out anyway, but things should have been more clear and less clunky.

The all green graphics are reminiscent of something on the Game Boy and look pretty good. The sound effects are well done too, as few as there may be. I wasn’t expecting to laugh out loud at the blood curdling screams of cultists that I feed to my Cthulhu.  But, you know, that might just be a personal problem. As a virtual pet, it’s cute, unique, and meets expectations. It will take about 3 days for Cthulhu to reach adolescence and about 6 days to reach adulthood, so at the very least, you can enjoy this diversion for a little under a week and move on. It’s a free app supported by advertisements and advertisement removing in-app purchases. Apparently this whole game is just a side project to help fund another game from NeuroCreativa called The Silver Key. It looks equally love-craftian, so check it out if you’re interested.