I mentioned recently in my review of Baseball Apocalypse ($0.99) that I love impossible games. One of those games comes from developer/publisher Invictus. Now, Invictus puts out a lot of games, very few of which actually interest me, though they seem to have found their footing in the last couple years. There are a handful of gems in their library that really truly shine. I’m talking the supremely elegant Greed Corp ($0.99), the heavy metal monster mash Tap ‘n Slash (Free), and the game that I name dropped in said review, Give It Up! ($0.99). While the original game grew with a handful of updates, a sequel was being made, and that sequel is pretty magnificent. I give you Give It Up! 2 (Free). (I’d have gone with something like Give It Up Again! but I digress) 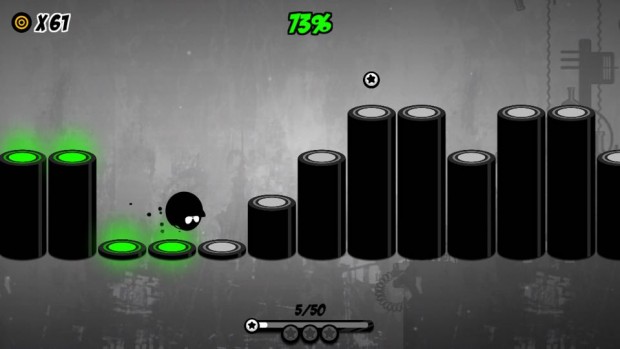 I was already intrigued by this series at the title. I love games with self aware titles or titles that directly address the player. Kind of like Try Harder (Free) from [adult swim] (which I also reviewed). Where that game is positive and encouraging in its title, Give It Up doesn’t even seem to want you to play at all. Few titles say “Just bring it!" quite as well. You know, except the old WWE game called exactly that. Anyway, Give It Up! 2 is a satanic fusion of rhythm games and impossible games, in which you hop along to the fast paced beat, tapping at just the right time to jump. You can jump to skip a space that holds a hazard or gap, or you can jump up to reach a single space higher platform directly in front of you. Everything follows the same rules and logic in spacing and height and width so it never gets confusing.

What Give It Up! 2 adds to the formula is depth and layers; mainly, vertically. Levels now often have high and low roads to take with varying challenges and transitions between them. What they also have are difficulties; a new addition to the series. And each difficulty is organically incorporated into a level via the new purple jump pads. You’ll find these pads at the very beginning of each level, letting you jump from the green colored easy level to the yellow colored medium and to the red colored hard. Each difficulty level also has its own music to enjoy, and the new tracks are pretty great. Much less cartoony sounding than the old game. 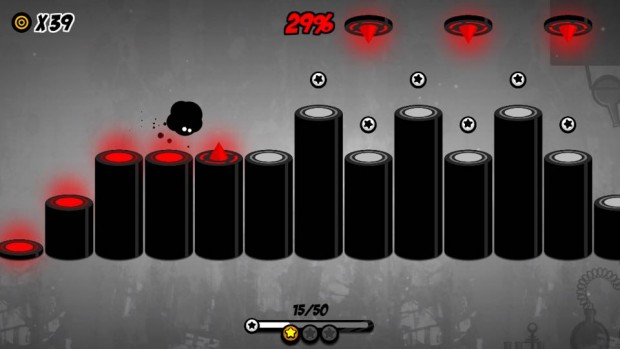 You want to know what’s really cool though? There is a reason you don’t just pick a difficulty from the menu. It’s because each level, which is basically three levels, is still one big level. You can transition between difficulties as you play, falling from higher difficulty levels to low, and those purple jump pads don’t just show up at the beginning! They can be used to reach higher spaces or higher difficulties, as well as secret areas. It’s pretty much impossible to see everything the game has to offer without exploring each difficulty layer for these transitions. Another new mechanic are glass tiles, some of which you can cross safely, some of which crack as you approach, indicating they’ll break and drop you to the hazard or difficulty below.

Also new to the series is a three star rating system. Where the first game was a maddening linear gauntlet of gameplay, now you can jump around a bit more, beating the easy or medium of a stage and moving on before coming back. You are scored through star tokens littered about the level. You need ten for one star, thirty for two, and fifty for three. On average, just following each respective difficulty will net you the corresponding stars. Though, with the moving, raising, and lowering platforms along with the higher and lower paths through the same difficulty, you can complete a level on hard and not get three stars by missing a token or two. 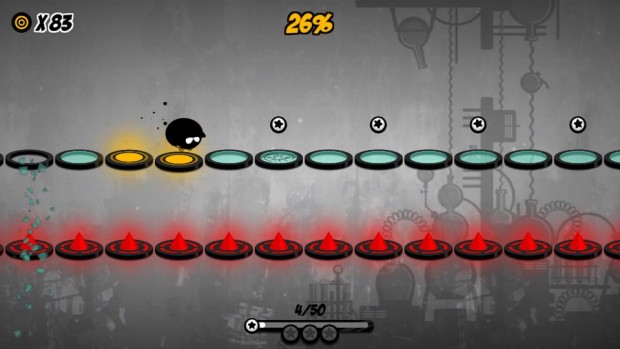 The first game added different characters as a cosmetic change. Each level has a number of coins, which thankfully, are permanent pick-ups that stay with you even if you die. You can spend one hundred coins in the character slot machine for a new character, or just buy the one or two that you want through IAP. One of these characters, The Dark Boy, costs twenty bucks for some reason. I don’t know if he’s simply cosmetic, has special abilities, or can only be bought and not won via the slots, but he’s there.

There are 18 levels on offer here, just as in the first game, split into groups of nine. You’ll need 22 stars to reach the second level pack, which means you can’t just one star your way through the game. You’ll need a few threes and many twos (Or you can just spend a dollar of IAP to unlock these levels early). If you get stuck, bored, or god help you, you just finish all 18 levels, you can delve into the daily challenge levels that rotate out every 24 hours. These will be your main source of coins. Even if you only get a quarter or half of the way through a challenge level, you’ll usually take home many coins for your trouble. 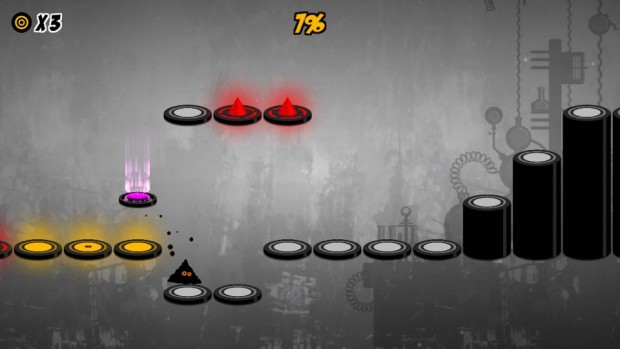 The game isn’t perfect, though it’s nearly there. There are some bugs and some issues with the sound synchronization as you jump between levels. I’d also love a pause or retry button in some corner. If I miss a pad or I drop from hard to medium while going for three stars, I really don’t want to just wait until I die. Usually the wait isn’t that long, but sometimes it can take several seconds. This seems like such a miniscule thing, but when you’re attempting a level hundreds of times or more, it adds up.

In the end, the game is still largely about trial, error, and repetition, but even on levels or sections of levels that you’ve mastered, it’s still pretty easy to mess up and die. Also, make sure you look at the Game Center achievements before you start playing if you’ll be going for them. You can mess yourself up by not knowing them ahead of time. If you have anything else to report or suggest for future improvements, you can do so in our forums. I’m pretty sure Invictus is actually posting more than anyone else is.

The design and music aren’t the only things improved. Even though the aesthetic is similar with the same background that kind of looks like a grayscale photo of a water damaged wall, there is much more visual variety. From the color coded difficulties to the new jump pads and glass tiles, and the bundles of lab equipment that scroll in the background giving you more to look at as well as some context for what is even going on in this game. Give It Up! 2 boasts improvements in all areas, and it is still cripplingly difficult when it wants to be. Even more so than the previous game half the time. Mainly, it offers tons of replayability as you go through each difficulty of each stage one by one, looking for coins and hidden paths that snake their way between the difficulties. It can be frustrating to the max, but it’s my kind of frustrating. If you like impossible games at all, don’t skip this one.