Yesterday we posted a brief video showing some changes to shields in the upcoming Town Hall 11 update for Clash of Clans (Free). Things are getting shaken up quite a bit, and today in a forum post, Supercell breaks out the new changes even further. The goal of all this is to promote more attacking and defending while still making sure the game can fit into players’ schedules.

The first new addition is called Village Guard. It’s easiest to think of this as a short term defense while your shield is down. Here’s how it works (courtesy of said forum post):

It seems like you can think of the Village Guard as adding a little bit of wiggle room to your shielding, so things don’t immediately go pear-shaped as soon as you unintentionally disconnect. What’s interesting about all this is they’re also implementing a system to force players to go offline, as you can’t be attacked while you’re actively online. I’m not sure how viable of a strategy it is, but currently it’s possible to just never go offline, and, well, never get attacked. With Town Hall 11, players will be forced to take a break now and again, which will kick them off just long enough to allow attackers to get in and do some damage. 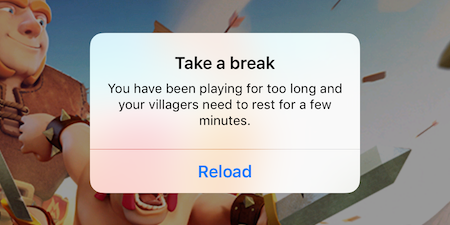 Every 3 hours of cumulative online (or Village Guard) time, players will be forced offline for six minutes. There’s some special cases where this isn’t the case, like if you buy a two hour Village Guard it’ll extend your limit by three hours, and if there’s sever maintenance that timer is paused until the servers come back up.

There are many more specific details on how this all works on the Supercell forums, but the supreme tl;dr is that Supercell is shifting the way the game is played and the strategies that involve using (or abusing) shields in a big way. It seems like a significant shift, and it’ll be interesting to see how players react to it.

Update: Here’s a video on these changes: