It was kind of surprising how long it took Sega to make an endless runner featuring Sonic the Hedgehog on iOS. Thankfully, when Sonic Dash (Free) finally appeared a few years ago, it was actually pretty solid (as far as free-to-play behind-the-back runners go, of course). In my opinion the recently released sequel, Sonic Dash 2: Sonic Boom (Free) is even better, so I’ve decided to put together some tips and tricks to help you be the blue-iest blur this side of Green Hill Zone.

Most people have played endless runners before, but just in case you’ve stumbled here from Google and have never run through a temple or surfed a subway, here are a few tips to get you started. (Everyone else feel free to skip ahead.) 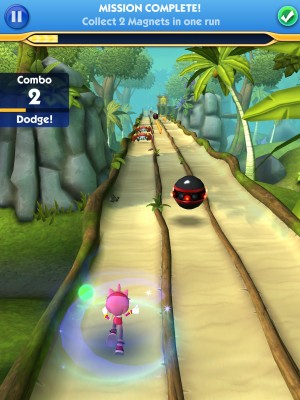 – Know your moves! Most runners handle movement slightly different, so it’s good to know what is and isn’t possible. In Sonic Dash 2 you can change lanes in mid-jump and end a jump early by swiping down. Both of these skills are essential the further you get in the game.

– Keep your eyes ahead! You can actually see pretty far into the distance in this game, and eventually you’ll get the rhythm down of avoiding things right in front of you without even looking.

– Don’t ignore upgrades! I can almost guarantee you won’t be getting a score worth writing home about unless you beef up your runners (and sprites) a bit.

– Missions! Most of these games (Sonic Dash 2 included) have a light mission system where you need to complete simple objectives while you run. These can be a great source of currency, so always keep these goals in mind while you play.

– Don’t be afraid to pause! If things look a bit too crazy up ahead, smash the pause button and take a breather. You’ll be counted back in so you don’t immediately run into something. (Don’t take too long of a break, though, because you’ll probably be “out of the zone” when you come back.)

In my experience with games in this genre, there are basically two ways you can play. You can try to collect as much currency as possible so you can afford all the shiny new upgrades and whatnot, or you can try to get as high a score as possible. These two things aren’t inherently mutually exclusive, and most people probably don’t even differentiate between them. It can be helpful, though, to consider which of those two goals you are aiming for on any given run. 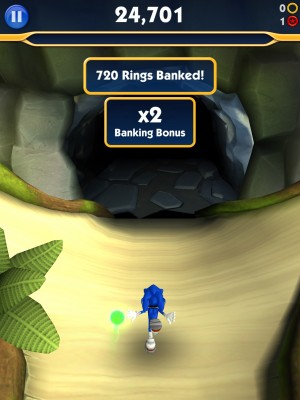 Consider, for example, banking Golden Rings. Every so often the path will fork to the left or right (or both) and you can enter a sort of cave that banks your rings (which means they’ll be saved and you can’t lose them). If you are trying to collect as much currency as you can, obviously you should always bank your rings. Even if you aren’t carrying that many, or have none at all, you should still take the banking path since every time you do, it raises the multiplier (doubling, tripling, etc. the rings you bring), making it even better next time you do bring rings in there.

Conversely, if you are chasing high scores, banking your rings can kill a great combo. It will be completely reset once you enter, and all your hard work stringing together kills, hoops, and near-misses will be lost. Ouch! (Of course, if you are going for a high score but don’t currently have a combo running, by all means – bank the rings.) 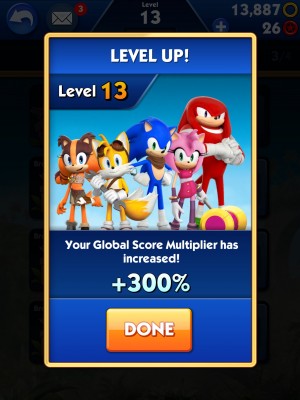 In Sonic Dash 2 your scores are based on distance, combos, and killing enemies. Basically, you’re going to want to stay in your run as long as possible while doing everything in your power to sustain long combos. On top of that, each character multiplies one aspect of the score just by bringing them along, even if you don’t use them. Knuckles and Amy multiply your enemy score, Sonic and Tails multiply your distance score, and Sticks will multiply your combo score. Each of these multipliers is raised by 10% when you upgrade that particular character. Furthermore, each time you level up (with XP usually gained from prizes), your global multiplier is raised which multiplies your entire score regardless of which characters you are using.

Gold Rings – This is the currency you’ll be dealing with most often. It’s mainly used for upgrading your characters and sprites, but it also acts as a sort of “shield” during gameplay, letting you get back up when you hit an enemy or spike (this is a Sonic game, afterall). Don’t hesitate to upgrade your characters and sprites, unless you are holding out for a better one that you’d rather spend your golden rings on.

Luckily, this being the game’s soft currency, it’s rather plentiful. You’ll find long lines of them all over the track while running, and you should be collecting them as much as you can (unless you’re going for a high score and there’s a better combo opportunity elsewhere, of course). There are also power-ups that contain 10 or 20 rings apiece, along with magnet power-ups that suck in rings regardless of which lane they’re in.

Red Star Rings – This is the game’s meta currency (aka “premium” or “hard” currency), which controls things that are not directly tied to the mechanics of running. You’ll use it to continue a run when you screw up, get more Event Tickets when you’ve run out, purchase new sprites and characters, purchase additional rows for your sprite inventory, and unlock new slots for the sprites you bring with you on runs. Eventually you’ll also use them for higher upgrades on your characters. 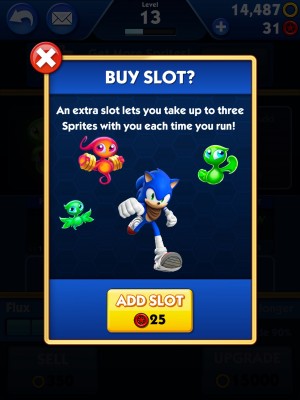 After that, you might want to consider buying a new character. Amy is a solid choice since she’s not only relatively cheap at 30 Red Rings, but she also has a great special move that will help you gain more Golden Rings. (While dashing, her hammer smashes obstacles and turns them into rings.)

Unfortunately, Red Rings drop pretty rarely during gameplay and don’t show up in prizes very often either, so definitely do some thinking before spending them. Definitely don’t spend them on replenishing Event Tickets, because you can just as easily do a video ad for free. I’d also advise against using them to continue a run (for the same reason – video ads) and skipping missions. If you get stuck on a mission, try a different combination of sprites or characters. You can leave it for a while if you need to, because the other mission will still change. If it’s particularly hard, you’ve been stuck for days and days, and there doesn’t seem to be any way to complete it for whatever reason, then–and only then–should you consider skipping it with Red Rings. But again, they are rare and the price for skipping is 16 of them (twice what the first sprite slot costs), so think hard first.

Blue Orbs – Okay, these aren’t really a currency, but you should still be collecting them when you can. These are found in long lines while you run (just like Golden Rings), and once you get enough of them you can activate a Dash by double tapping the screen. Some characters have a special Dash, so it’s worth considering which characters you bring with you on your runs. For instance, if you like collecting rings, Sonic and Amy are great choices since their Dashes will net you way more.

There are at least 45 different sprites in the game, and they all bring something different to your runs. Which sprites you should take with you largely depends on what your goals are each run (see “Rings or High Scores?”, above). For example, if you are trying to get rings a good combination would be Feric (magnets will appear more often), Flux (magnets will last longer), and Stash (at least half of the rings you drop will be banked).

Also keep in mind that there are two types of spites: One Use and Forever. One Use sprites can be helpful, particularly if you’re trying to pass a tough mission, but Forever sprites are the ones you’ll really want to cross your fingers for. These guys can be game-changing once you have three slots open and can sink some golden rings into upgrading them. Once you’ve upgraded them five times you’ll hit a wall, and you’ll have to “evolve” them by combining other sprites you’ve collecting (but be careful not to use ones you want to keep!).

You’ll get one random Sprite by opening the “Get More Sprites” menu in the sprite inventory and paying some Red Rings, but I’d advise against that in the beginning as there are much better ways to spend those when you’re starting out. You’ll also get sprites from completing missions and events, and from the Daily Sprite Drop in your mail. 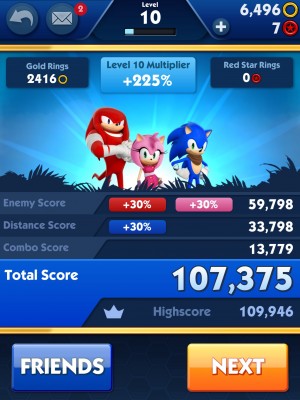 – Always check for new events. There are some that appear every few hours, and they are an indispensable source of currency, sprites, and XP. Plus, some of them let you exceed the stated objective for even more rewards.

– Combos are about more than just squashing enemies. Dodging (swiping away at the last moment before hitting an obstacle), running through hoops, and bouncing on springs all add to it, and if you’re skilled (and lucky) enough you can string incredibly long combos together for massive scores.

– If you’re collecting rings for a mission or event, don’t worry if you accidentally hit an enemy. Those rings you lost will still count toward the objective.

– Try not to waste your Dash. For instance, if you are using Amy, save it for a spot with lots of obstacles you can smash through. (Don’t wait too long, though, as any time spent holding a Dash is time not spent collecting orbs for the next one.)

One of the reasons I’m enjoying this game so much is that it’s genuinely fair with the free-to-play stuff. Not only are there no timers prohibiting you from playing the main game, but pretty much everything in the economy seems like it’s within reach as well. However, that doesn’t mean there aren’t ways to optimize how you play and spend to get even more bang for your zero buck, and to that end, I hope this guide was helpful. Happy running, hedgehogs!