Solforge (Free), Stoneblade’s innovative CCG that went the digital-only route even before Hearthstone came out, is heading for a major overhaul in the next few months as it moves from beta to full release. If you haven’t played Solforge before, this CCG has a smart leveling system where each card has 3 (or 4) levels, and every time you play a card, it levels up. That way, strategies are very different than most other CCGs because you’re always making difficult decisions regarding which card to play and at what point in order to level the cards you want. According to the latest update from the developers, Stoneblade has finally realized the need for a timer in the game (many players famously waited for the twenty-minute timer to tick down as often as they could). When the full game comes out, it will have a turn timer with a reserve bank that will push players to play faster without punishing them during those tricky turns what might require more thinking. 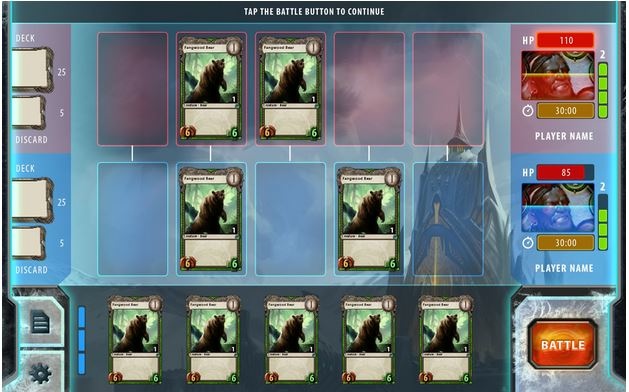 In addition to the timer update, Solforge is still getting more cards in the form of the Darkforge Uprising set; this game has got so many cards recently that it’s ridiculous, in a good way. Stoneblade is also hinting at significant R&D work towards rebalancing the game as the current Level 3 is often way too strong and makes the game a race rather than a strategic affair. Finally, the developers released another teaser image of the upcoming UI rethinking, and to be honest it wasn’t very encouraging. As you can tell, it’s very dry and I hope this is just a mockup without most of the art on it. Still, it’s good to hear that the redesign is progressing and it will hopefully give us the fun of the mechanics wrapped in a better-looking and working UI.