Hello everyone, and welcome to the week! It’s time once again for our look back at the noteworthy updates of the last seven days. It’s a lighter load than usual this time, but with a new OS version coming soon, business is likely to pick up soon. Of course, you can keep an eye out for updates yourself using AppShopper Social (Free), the watchlist in the TouchArcade App (Free), or by participating in the TouchArcade forums, but this weekly summary is here to fill in the things you might have missed. Let’s dig in!

Pixel Dungeon, $2.99 Let’s kick this off with the update for Pixel Dungeon, a cool roguelike that’s been around Android for a while, but in recent months got a nifty iOS port. The new version adds a new item, a new room type, a new enchantment, and a couple of fresh quests. It also adds an auto-targeting system for missile attacks, and makes a number of changes to various items and systems for the purposes of balance.

Candy Crush Soda Saga, Free A new episode that takes place in a chocolate-dipped castle adds 15 levels to King’s popular puzzler, adding up to a grand total of 495 stages. These levels have a new feature called Soda Fizz, which tasks you with bursting bubbles to generate a Soda Rush. I’d love to tell you more about how that works, but I’m only on level 259 right now.

Happy Wheels, Free Happy Wheels has proven to be pretty popular on the App Store, so it’s nice to see the developers are giving their new players speedy service on updates. This new version allows you to listen to your own music while you’re playing. It also adds support for wireless MFi controllers, increases the size of the special button, and fixes a bunch of bugs and features that weren’t working as intended.

Pixel Heroes: Byte & Magic, $6.99 A small but significant update to Pixel Heroes adds the ability to play the game in portrait orientation. I wish more games would support both orientations, because I find each to be very convenient depending on the context. Naturally, the developer also did a little bug-squashing while they were at it.

Pocket Mine 2, Free There’s a new challenge mode in Pocket Mine 2 that features the new elemental blocks, along with some new legendary gear to collect, and a few tweaks to the UI.. There are also a bunch of little bug fixes to keep everything running smoothly.

METAL SLUG DEFENSE, Free To celebrate hitting 25 million downloads across all platforms, Metal Slug Defense is having another event where medals will be handed out like candy. Log in every day to get up to 250 medals for free, and join in on the Gigantic Weapon event where you can earn a couple of special giant units.

Taichi Panda, Free There’s a big list of changes in this update to Taichi Panda, starting with the storage cap being increased to 200 slots. Caps are raised all around, with Tier 6 Ascension, Tier 36 Discovery, and Guild Level 40 added to the game. There are a number of other fixes and tweaks to the game, mostly dedicated to filling out content for long-term players.

Cards and Castles, Free On the other end of the spectrum, the newest update for Cards And Castles adds a couple of favors for new players. There are now some low-cost starter items in the shop, including starter decks and limited time bundles. It might be just the thing to get you going, if you don’t mind spending a little money. There are new custom castles as reward for ranked matches, and the game scenarios have gotten an extra pass to make them more fun. I’m not sure if any of these fixes help the game’s fundamental balance issues, but hey, at least the developers are still swinging. 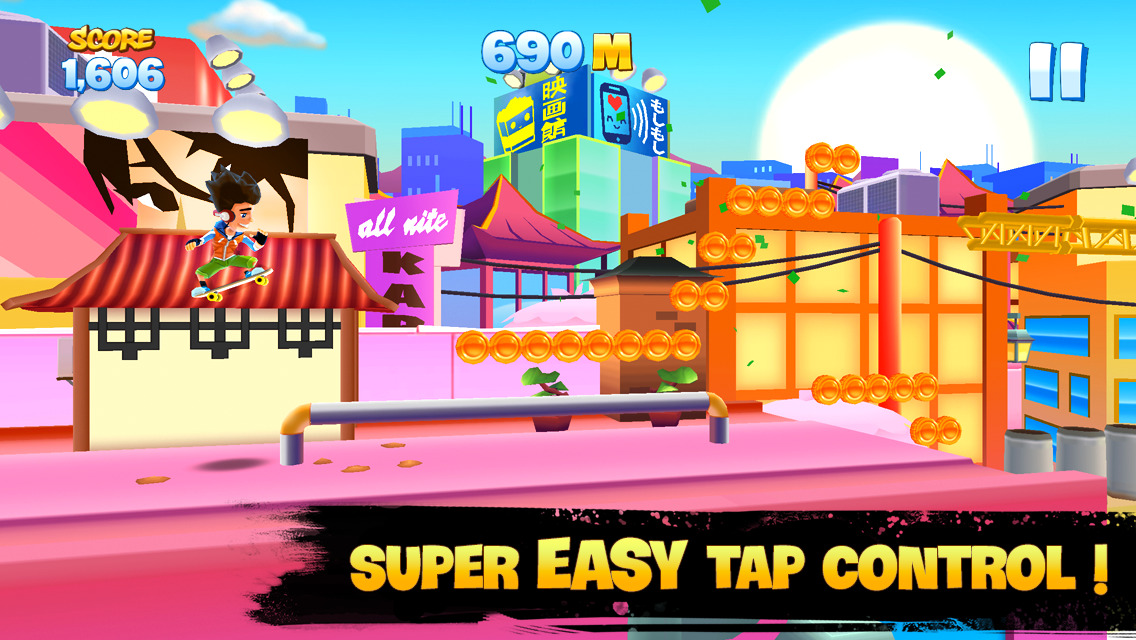 Skyline Skaters, Free The Skyline Skaters are in Tokyo this time around, which means it’s time for udon, Godzilla, and all-night karaoke! Just kidding, it’s only a new backdrop to skate in front of. But do watch out for Godzilla, he’s a near-constant annoyance for Tokyoites and he’ll probably get in your way at some point, too.

Trials Frontier, Free Nowhere in the rulebook does it say a horse can’t participate in motorcycle races. Oh wait, it says that right here. Hm, well, how about horse-shaped motorbikes? Yeah, I didn’t think you’d have an answer for that, smartypants. The new rodeo event brings new tracks, outfits, and paint jobs to the game, along with the spiffy Stallion bike. The game is also running a sale in its shop, so if you’ve had your eye on anything, now’s the time to bite.

BADLAND, $0.99 Level editors are so hot right now. Even Mario is doing it! Badland now lets you create your own levels and share them with other players. Naturally, you can play the levels other players make, and rate them so that others know what’s cool. If someone makes one good enough to impress the folks at Frogmind, it’ll be added to the official level roster. This is your chance to be a star, friends!

Alpha Omega, Free Alpha Omega is back with another set of level packs, each one containing 96 levels and selling for $0.99. The Back To School pack is full of school-related words and is just the thing for students excited to be back at their desks, and parents who are excited to have them back at their desks. This update also has four excellent new music tracks to play along to, so make sure to check it out even if you aren’t interested in buying new packs.

Darklings Season 2, Free The follow-up to Darklings has a chunk of new content for players to enjoy. There’s a new map that takes place in a desert, complete with its own boss, Scorpio. There is also a new Darkling family joining the crew called the Wanderers. There are lots of fixed bugs, and the game balance has been shifted a bit more in favor of the player, with faster energy recovery and a 10% sale on items in the store. They also threw in Metal support for good measure, because hey, why not?

Alphabear: Word Puzzle Game, Free Alphabear‘s snazzy new update includes a bunch of optimizations to make the game run better. Satisfied? No? How about a sweet new animation for lucky devils who draw a legendary bear? Still not enough? Okay, you have pushed the Bear Gods too far with your greed. Now you also get frozen tiles in some Chapter 7 events. You’ll have to thaw them if you want to use them. That’ll teach you to press your luck with bears!

Minecraft, $6.99 Hoo boy, this is the big one, isn’t it? This long-awaited update adds the Nether and its inhabitants to the Pocket Edition of Minecraft, along with cross-platform play for up to five players, new touch controls, MFi controller support, enhanced weather effects, experience, anvils, brewing, enchantments, golems, flower pots, sneaking, sprinting, and much more. It’s still not quite on the level with the PC version, but this is a huge step towards that goal. For this notable, if somewhat later-than-expected, achievement, I am happy to award Minecraft with the coveted Update Mondays Most Spider-Mans Of The Week award. You’ll have to craft your own metaphorical celebratory vermouth, however. There was… an incident. 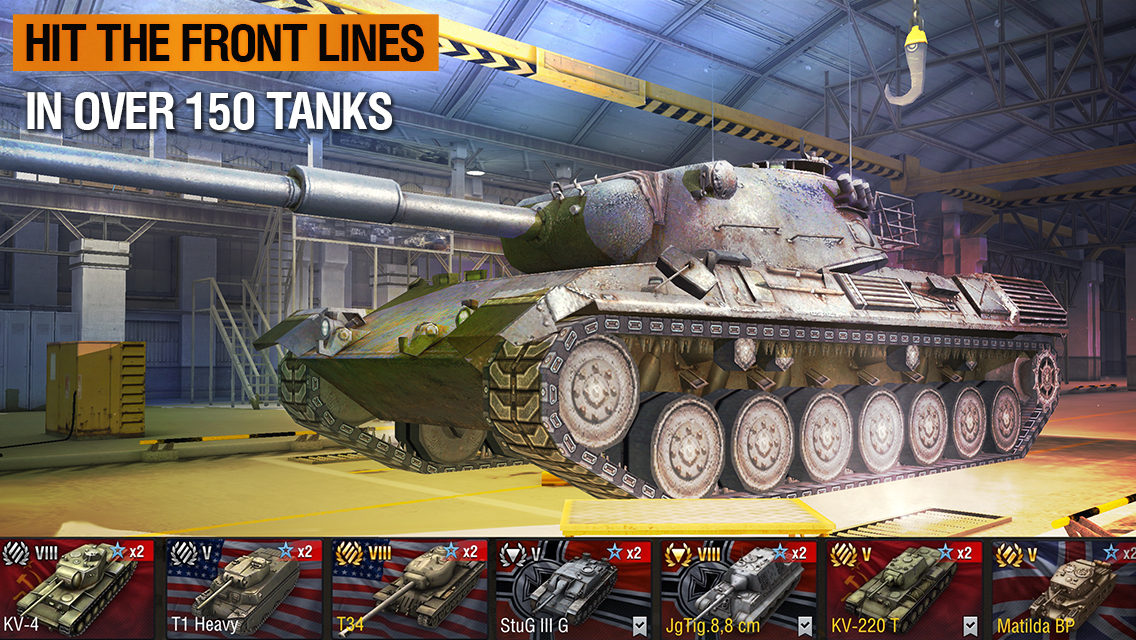 World of Tanks Blitz - 3D War, Free The new version of World Of Tanks offers up a handful of new British Tank Destroyers, while simultaneously making balance tweaks to a number of old favorites. Some have won, some have lost, but I’ll leave that fun for you to sort out. In addition, the Clan system has received a bit of love with improved searching and Clan chats.

Heroes of Order & Chaos, Free Two new heroes join the fray with this update. Tryptic, the Flame of Vengeance, is not just the name of the morning-after results of eating vindaloo curry. It’s also the name of a corrupted Flame Knight. Meanwhile, Carlie Q is an evil biorobotic doll who loves to murder and cause suffering wherever she goes. So… kind of leaning towards the ‘Chaos’ end of things this time around, yeah?

Guardian Cross, Free Guardian Cross is probably one of Square Enix’s bigger worldwide successes in the free-to-play market. It has a healthy userbase and continues to see support from the developer, which is more than can be said for some of their more local, high-profile releases. This update adds a new hunting ground, Aedengard (Night), with new Guardians to go along with it. A new ability called Laevateinn has been added, as well. They’ve also made a few tweaks to the gameplay. If you lose to a floor boss and use a potion to take another try, the boss will be in a weakened state. Coliseum bonuses are now applied to both sides in a friend match, and Almighty Guardians that were given as rewards in the Coliseum mode are now tradeable.

Order & Chaos Online, Free Wow, both Order & Chaos games updated in one week? What, is there a new one coming out or something? Anyway, the new version adds a couple of special events. The Summer Carnival comes just in the nick of time, with a beach paradise for everyone to kick back and relax in. You can pretend it’s still the height of summer, instead of the tragic last gasps! When you’re ready to come back down a bit, the Ghost Nocturnal event brings a mysterious temple where you might be able to capture yourself a limited edition Kapa pet if you’re lucky.