Poker is an interesting game because it’s essentially gambling, but with enough of a skill-based twist that ideally, a high-quality player is going to do better because they know how to do well at the things they can control. That doesn’t mean that the best player will win, and there’s nothing other than the laws of probability stopping a drunk tourist from winning the World Series of Poker by always going all-in. But that control of the meta-game is still important. Whether there’s enough control over the non-luck aspects to be fair or fun is a good question in many aspects. For example, in the US, daily fantasy sports like FanDuel and Draft Kings are basically gambling, but there’s a very subtle distinction that makes them legal. Essentially, Dice Mage (Free) is what happens if you take that balance of luck and the possibility that you could lose due to factors outside of your control, and made it into an RPG. 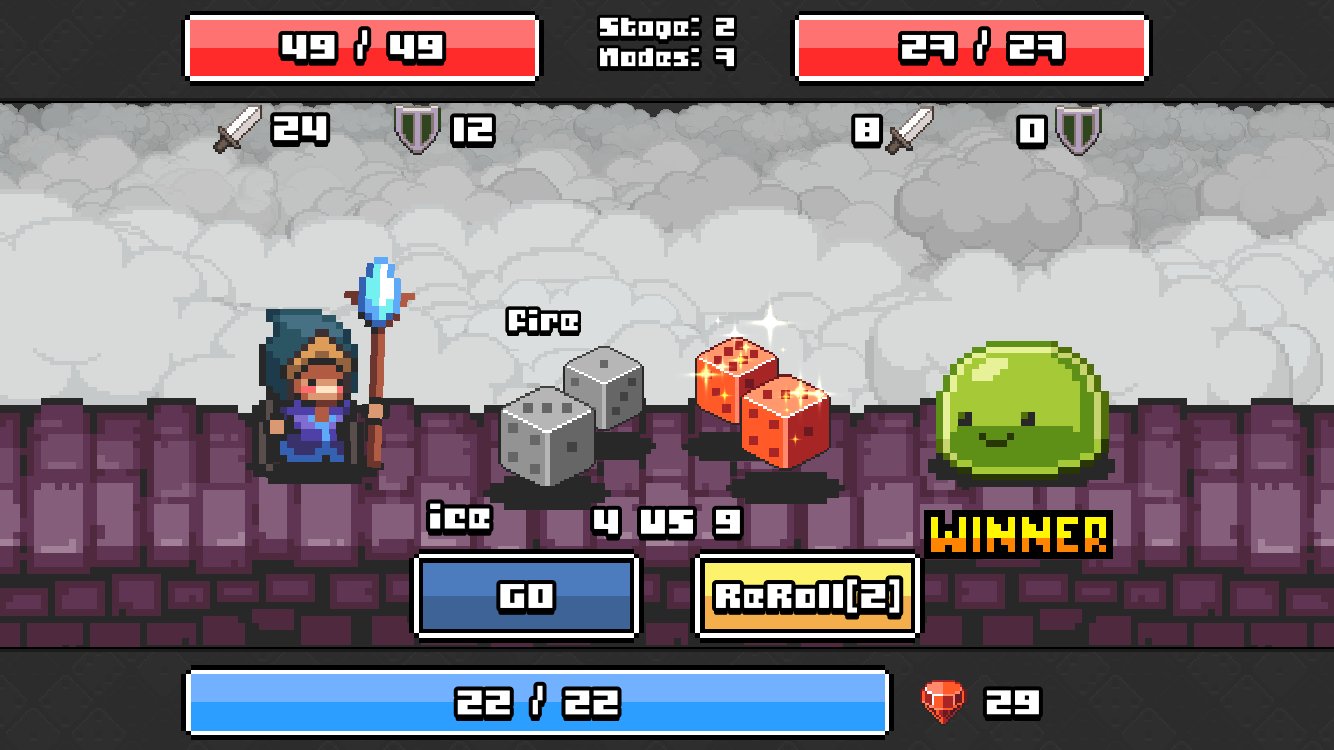 Combat is centered around dice rolls – if you roll a higher number than your opponent with your two six-sided dice, you get to attack them. Whittle their health down to zero, and you win. But immediately the game starts throwing wrinkles into the equation. You can equip dice that have different effects on each number, like increasing the total number you roll, or casting a spell on your opponent before the decision of who attacks whom is made. And you have items that can increase your attack and defense stats, along with providing other special bonuses.

Oh, and you can re-roll any dice roll you make. That plays a huge role in how you perform. But the dice rolls are based on mana, with increasing costs for how much each successive reroll costs. So, there’s a definite element of strategy, and the game comes down to managing your resources of health, mana, and gems. Health is the most important resource, because if you die it’s game over, but running low on mana means you have no way to alter your fate. Knowing when to cut your losses and when to keep fighting is key. 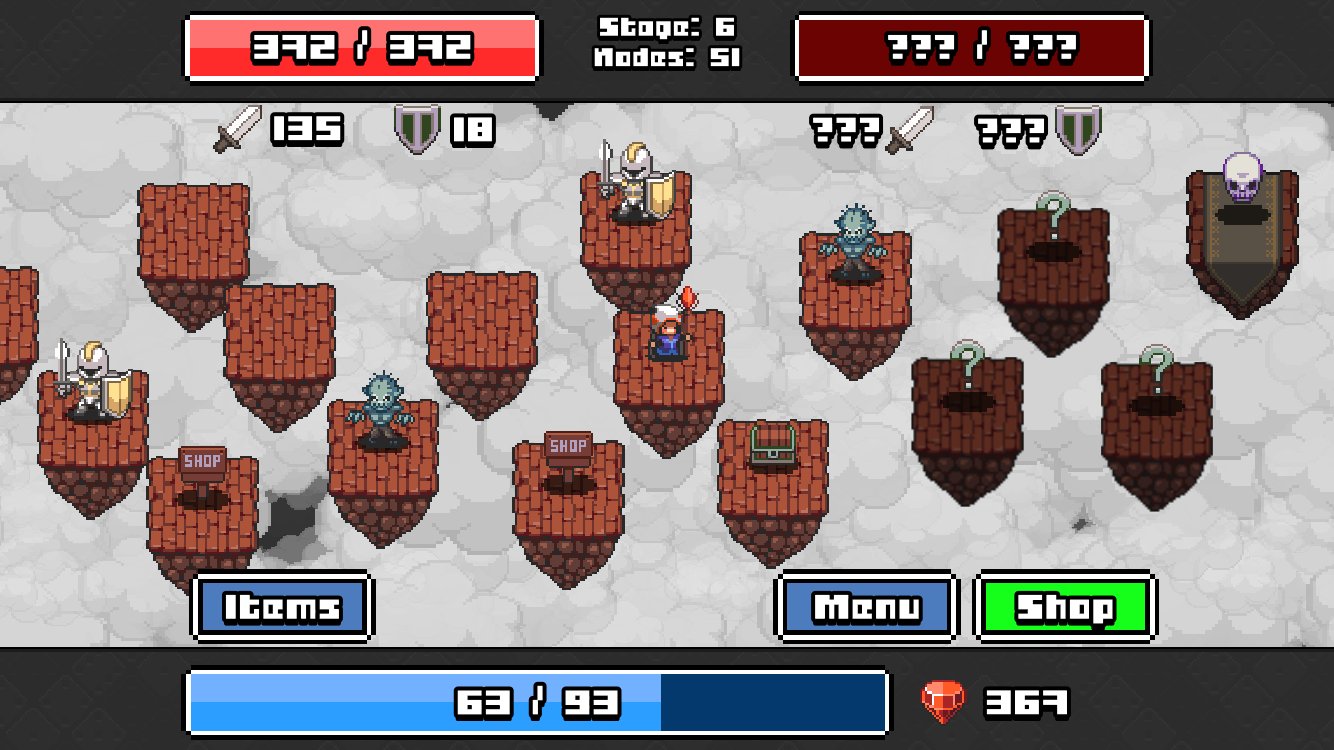 It’s an interesting mix for sure, because you have to constantly balance out the long game with the immediate battle ahead of you. It’s essentially just gambling all the time, but what you choose to risk is key, and that’s the key to good skill-influenced games of chance: it needs to make you smart about what you risk.

Dice Mage also has gems as a currency, which can be spent on health and mana refills at shops, along with re-rolls in the item rooms. This currency can be bought through IAP, but you can also get a small-but-useful amount through video ads. Plus, you earn it with regularity in the game. If you spend money, you naturally get to be a bit riskier and bolder in your spending, but it’s still a fair game for free players, which is important to me. I understand why games have to monetize, but I think that games need to also be fair and provide an enjoyable experience to players who want to enjoy the game for free. 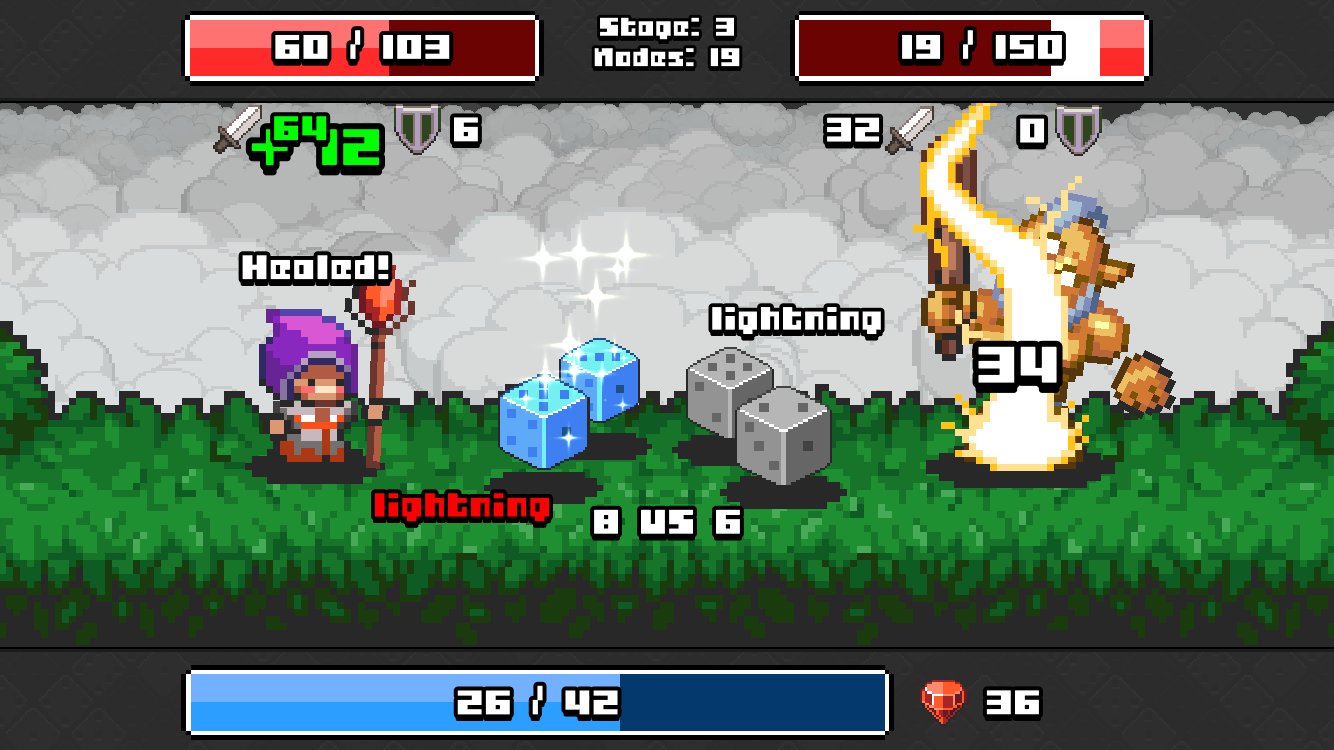 This is the kind of game that tends to drag on a bit too long. The battles are quick and punchy, but I’m referring more to the overall progression of the game. While the game does a good job at giving you the ability to become slightly better over time, it feels like the game’s progression could have taken place over a shorter period of time. This becomes especially troublesome as you get more powerful, when easier matches become a cakewalk as you have easier battles early on when you have stronger equipment. A refined progression could have been a much better experience. Or maybe even going full roguelike, and not having persistent aspects beyond the gems.

Also, the game struggles to run at a consistent frame rate on the iPad Mini 2. Sure, it’s a device that’s a couple years old, but it doesn’t feel like this should be the game that should be making me question whether it’s time to upgrade to a new iOS device by necessity, rather than by “I am a technology addict who will buy new stuff regardless of whether I need it or not."