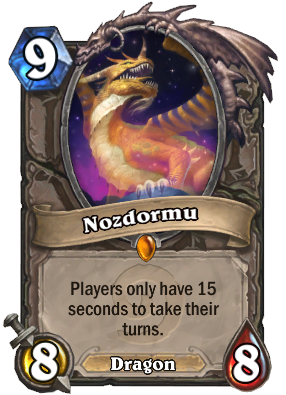 One of the main criticisms of Hearthstone (Free) and its new expansion, The Grand Tournament, is just how long some of the new animations take. For instance, when you play a card that utilizes the joust mechanic, there’s a whole dramatic card draw and reveal before the card you played can have its joust effect activate (or not activate if you lost the joust). Typically, this isn’t a problem at all as the 75 seconds players have to take their turns is almost always enough to do everything you’d ever want even with all sorts of silly new animations.

The “problem" here, and imagine very exaggerated air quotes surrounding problem, comes from adding Nozdormu into the mix. With that card out on to the field, the 75 seconds players usually have is reduced to 15 seconds, at which point those long animations start to become a really big deal. Further complicating the problem, is to the Hearthstone servers, the animations effectively don’t exist. They’re all being rendered on the client side, and your turn starts when your opponent ends their turn, regardless of how many pending animations are still queued up to play out.

With the right deck, this can be abused to the point of having the game skip your opponent’s turn entirely. Basically, all you need to do is play a deck that has the ability to stall until the late game, drop Nozdormu, then have enough joust cards on deck to constantly having them go off. The insane result of all this can be seen below:

Now, before you get all worked up about how messed up this is and how Blizzard should do something about this game breaking bug, just realize this setup is incredibly fragile- Like any combo deck. Here’s the deck list for something similar, if you want to give it a try… Just keep in mind, unless you’re playing against a friend who is specifically letting you get the game to a state that you’re going to be able to dump Nozdomu and a bunch of joust cards, you might not be living this particular dream very often.

Regardless, breaking games is always fun.