There are people who ask why retro games keep getting developed and iterated upon. We still have the classics, and they’re more readily available than ever, so why do we need more of them? In some cases, it might be better to let some franchises die. This feels like a common complaint against the Sonic series, but I think that’s more Sega’s development teams not knowing what makes a Sonic game good (and loving bottomless pits too much). But interestingly, it’s Pac-Man that’s showing how a series can iterate and advance decades after its arrival. Pac-Man Championship Edition DX ($2.99) was a recent fantastic example of how to advance and iterate the yellow dot-muncher’s familiar maze-based gameplay. Now, Pac-Man 256 (Free) from Crossy Road (Free) developers Hipster Whale, with the help of 3 Sprockets of Cubemen ($0.99) fame and Bandai Namco, shows that you can teach an old Pac-Man new tricks. The developers who advanced the Frogger formula into a definitive mobile experience, have done so again with Pac-Man. 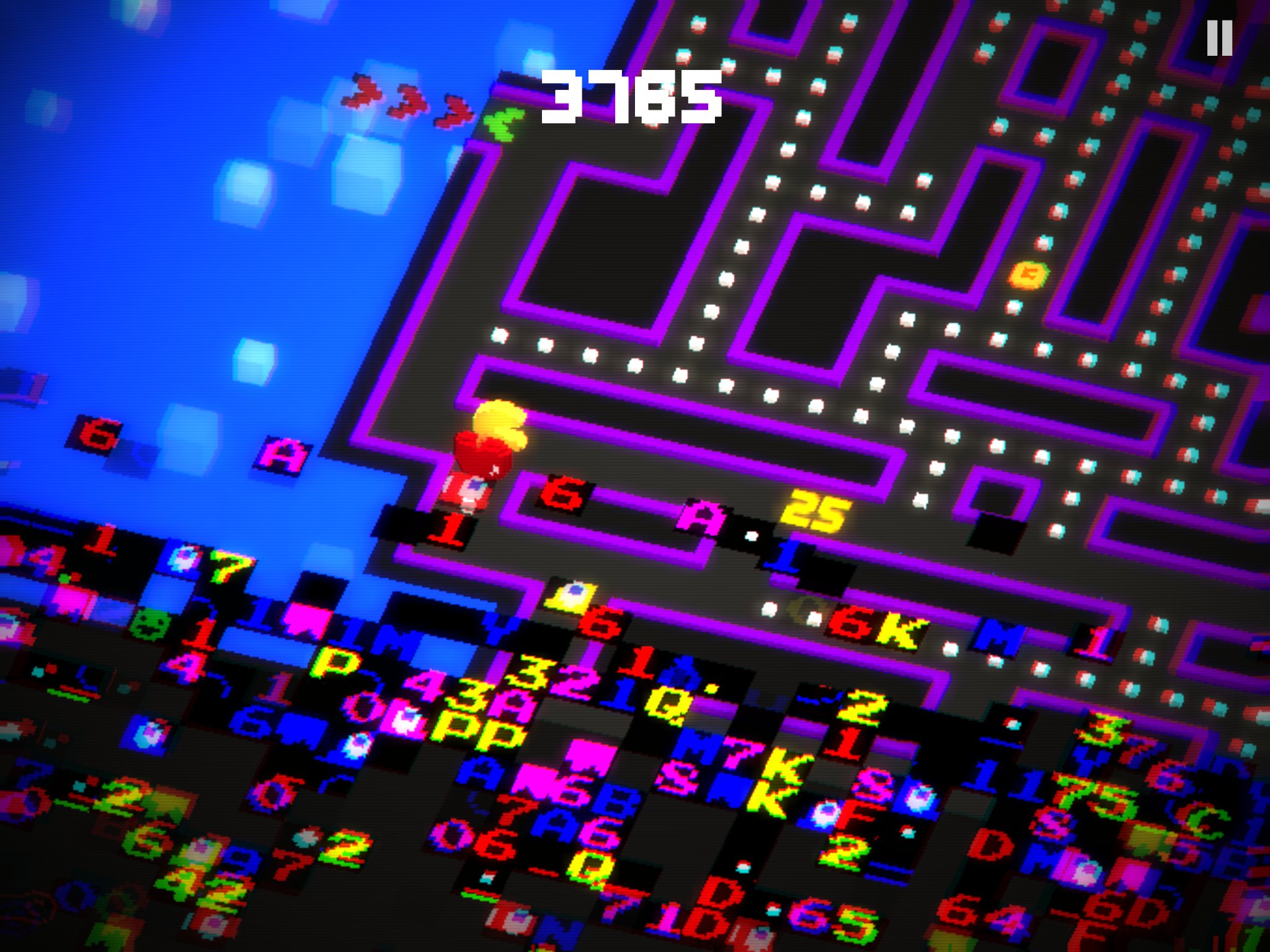 The gist of the game is essentially Pac-Man meets Crossy Road, in that you’re trying to advance ever forward through endless levels, with a persistent threat trying to catch up to you. Instead of dangerous roads, you have an endless maze to keep advancing through. Instead of the eagle, you have the infamous level 256 glitch from the original arcade Pac-Man trying to consume you. It’s a very different threat from the eagle, in that it’s more of a presence, not something that will suddenly come and get you. It’s there, and so are the ghosts. They all have common behaviors that will torment you and drive you crazy every time they get you, but they can be exploited. Oh, and they can be eaten if you get power pellets. You probably know Pac-Man rules, and Pac-Man 256 doesn’t mess with them too much.

The big addition beyond the endless gameplay, are the powerups. These really mix up the gameplay, in that they give you different tools to deal with ghosts. The laser is awesome, the bomb can get you out of trouble, stealth helps you deal with ghosts in tricky spots, and so on. You can only have up to 3 at a time, and you still have to pick them up in the levels, but otherwise they’re a clever, and useful addition. 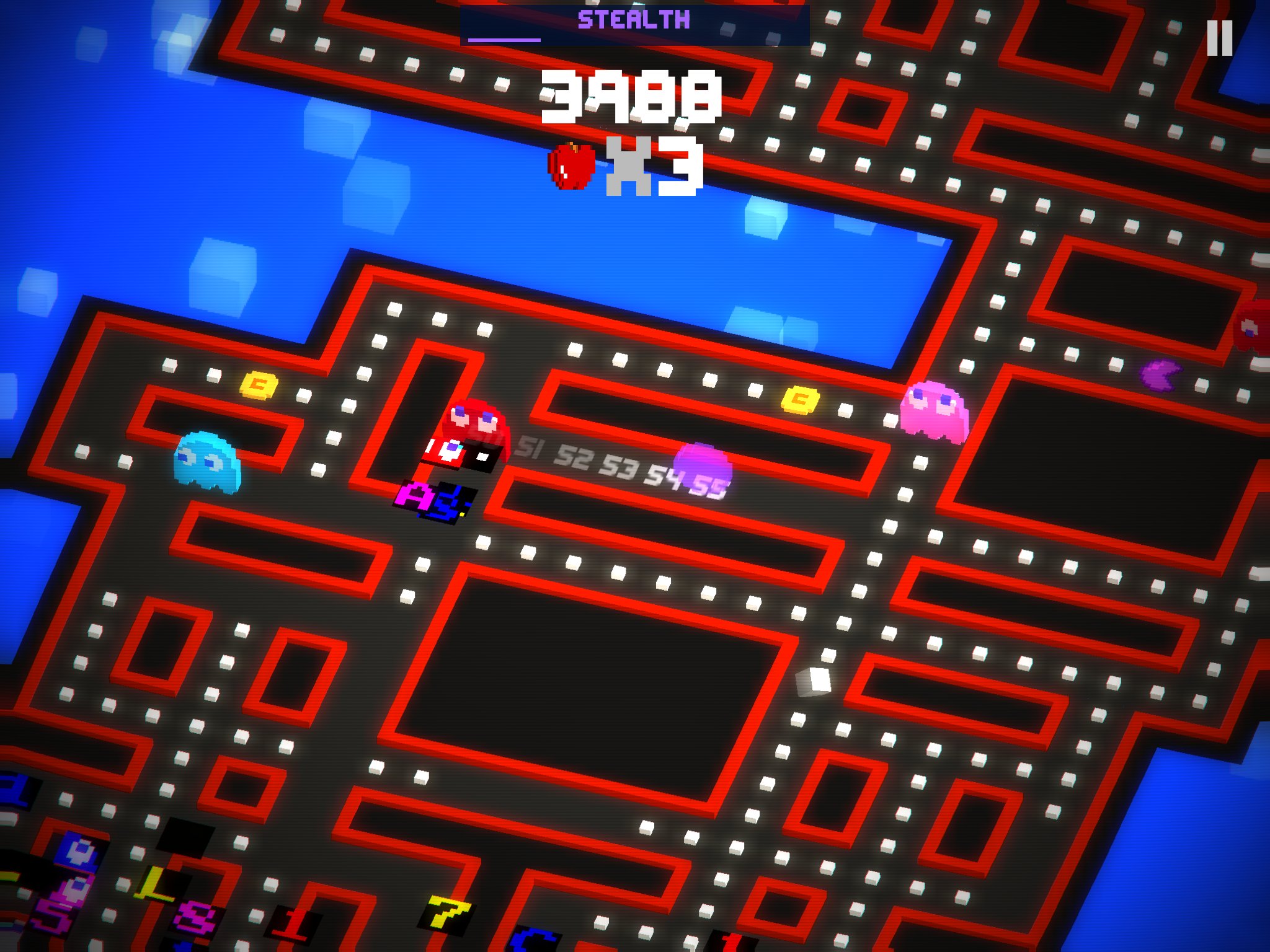 They also form the base of the game’s monetization, and despite this being from the Crossy Road developers, this is not Crossy Road monetization. You have a credits system, that’s somewhat like lives in many other mobile games, but is optional. You can play the game without powerups for free and without any ads if you want. But if you spend one of your six credits, you can play with your powerups appearing in the level. Credits can also be spent on one revive per level. You can also spend coins to upgrade these powerups, but there’s a wait timer to get them upgraded. Matt Hall of Hipster Whale said during my Mobcrush stream that this was meant to have you experiment with other powerups, as you can’t pay to skip the wait timers. I certainly understand that motivation, for sure, though I do wish that the wait timers didn’t steadily increase to being measured in hours.

But what’s interesting about the monetization is that you can buy out of it. The credits system is something where you can get more through incentivized video ads, buy 12 (you get 6 for free, that recharge 1 per 10 minutes) for $0.99, or get unlimited credits for $7.99. You can also buy a coin doubler for $4.99, and that’s it for the in-app purchases at launch. You can watch incentivized ads to get more coins, but you get more for completing objectives and find them in the levels. It’s definitely a bit more on the traditional free-to-play side than Crossy Road, but that you can buy out of the big system for a nominal fee – and you’ll get your $7.99 worth out of the game if you buy the credits, for sure – is a huge plus.

But past all the monetization and everything, what Hipster Whale and company did here was to make a really fun new take on Pac-Man. The endless mazes are a perfect addition to the series, that I’m surprised no one else has made yet. The ghosts are devilishly challenging, and they all present unique challenges that you have to learn and strategize around to stay alive. Sometimes, I feel like they can come out of nowhere, and you can get trapped, but often, smart play is key to success. This is why the 256 glitch being slowly encroaching is good. It’s a threat, but it shouldn’t dissuade you from backtracking a bit to find a path to survive. 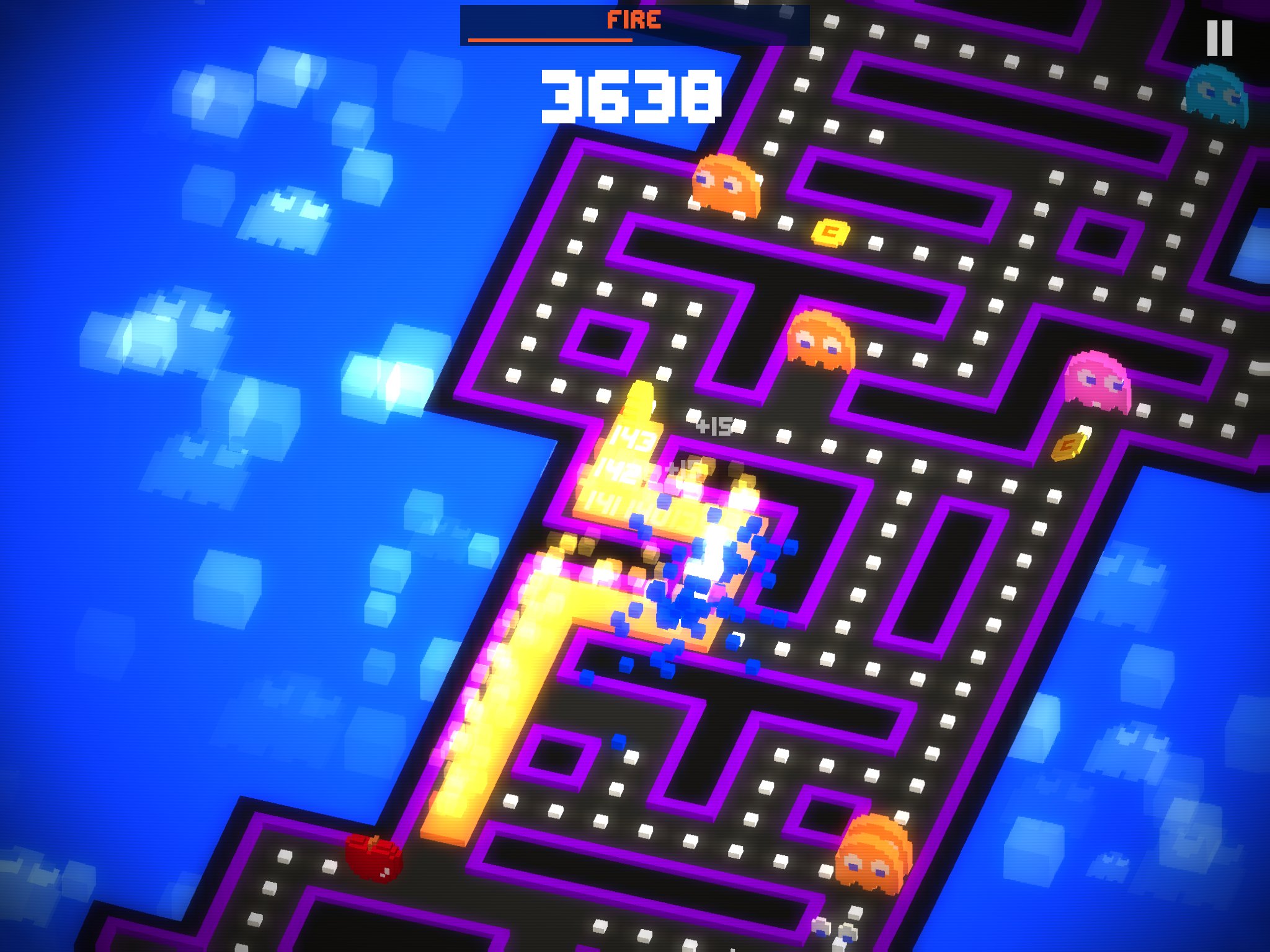 The implementation of dot-eating is done well, in that if you eat 256 dots in a row, you get a satisfying screen-clearing bonus. The dots are ever-present through a level, but with occasional breaks that you have to plan around in order to get the 256. And of course, with the ghosts running around, you have to sometimes abandon your plans to get the 256 in order to keep yourself alive. It’s an interesting sub-system to play with, and the screen-clearing is an effective tool that rewards you with points, not to mention feeling extremely satisfying.

The point multiplier system feels like it’s a bit heavily weighted toward luck for high scores, to a degree. If you get more of the fruits that give you 5x and 6x multipliers, then you’ll be getting higher scores quicker. Of course, for the skilled players, it all balances out over the long term. Plus, it gives you something to work for: you always need to be multiplying, because dot-eating, ghost-consuming, everything you do gets multiplied. Of course, a multiplier might not be worth getting if it leads you into danger, so be careful! My biggest problem with the multiplier fruits is that there’s no absurd fruit to get. Why can’t I eat a key for a big multiplier bonus?! 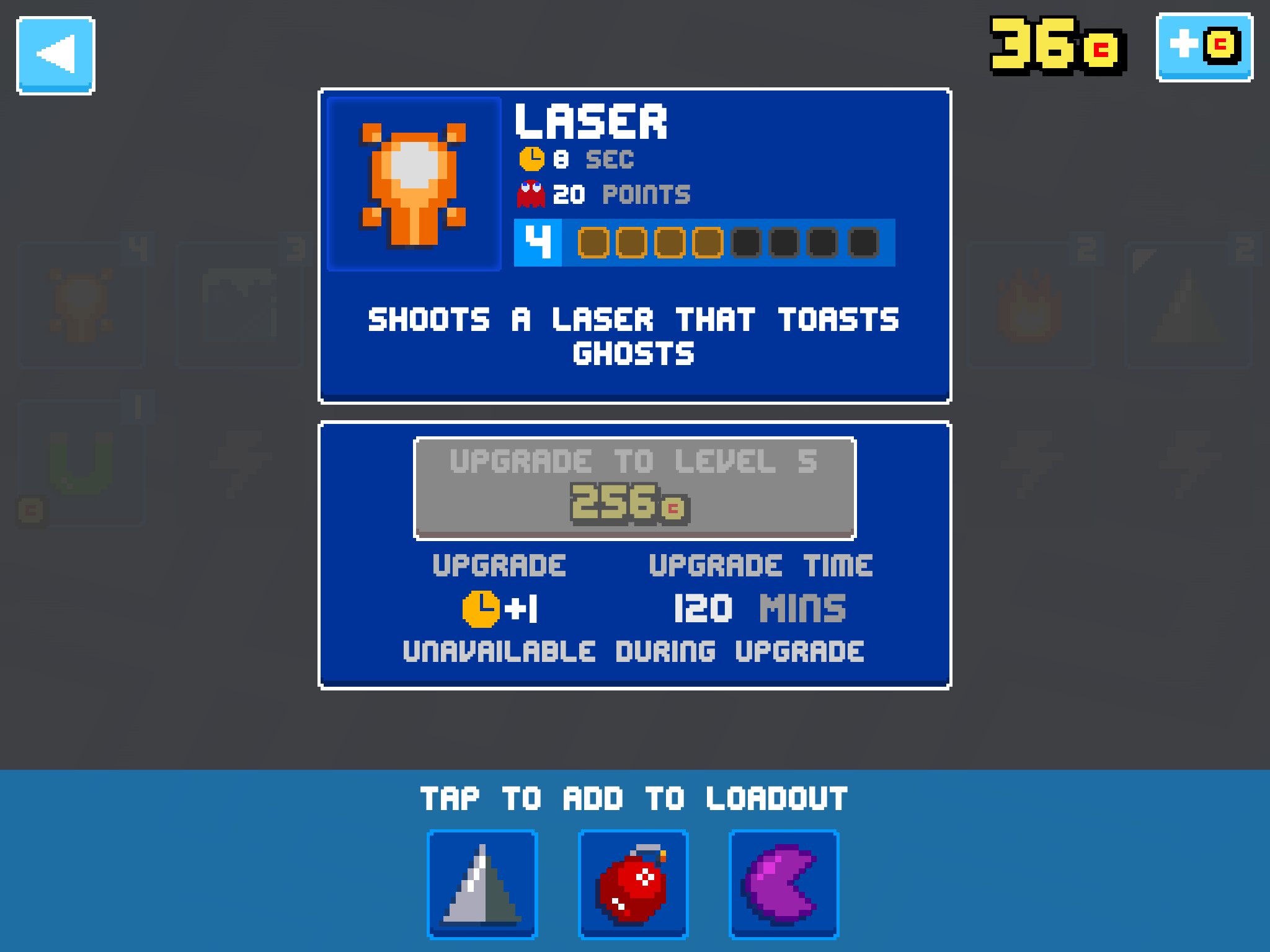 So there are all these different tweaks and additions to Pac-Man 256. But what it gets right is that it builds on the thrills of the original game, of running around the mazes, and trying to avoid the ghosts. There’s the frantic moments of survival when you fear you might be trapped, and the relief and satisfaction of getting out. The thrill of turning the tables on ghosts with a powerup is there. Pac-Man 256 nails everything that made the series so compelling over time, and just put it in a new package. It’s the same kind of thrills, just with the new challenge of doing so in a randomly-generated, constantly-changing maze. Oh, and with eight types of ghosts, and many new powerup types to use. It’s simple but with emergent depth and complexity that you realize that hey, there’s a lot going on here. This game is difficult to put down, especially as you go for high scores.

Crossy Road was great for its presentation as well as its gameplay, and Pac-Man 256 nails that, too. The game is in 3D, but plays the characters off as if they were flat 2D versions of their characters, just springing up in a 3D world. The game runs at 60 frames per second, which can be toggle down to 30 in the options to save battery. The visual effects are great, including subtle ones that pop up when the glitch is near. Portrait and landscape orientations are supported, and MFi controller support is in. I do wish unlocks carried over from device to device, but you’re not losing out on anything you’re spending money on.

If you love Pac-Man, Crossy Road, or just good games in general, play Pac-Man 256. It sounded like a great idea when it was first announced, and it’s as great as it possibly could have been. The monetization might annoy some people, but I totally think this is worth the $8 to buy out of the credits system, and maybe the $5 for the coin doubler if that’s your bag, too. But beyond all that, what Hipster Whale and company did here was to make a brilliant new take on Pac-Man that everyone should play.