The Long Siege ($1.99) clicked with me when I first saw it, despite my vocal distaste of match-3 games in general. I feel like the genre is just overplayed. But sometimes, a little bit of familiarity isn’t a bad thing, and I actually do enjoy the unique aspects of this one, though it is definitely an imperfect game. This is a match-3 RPG of sorts, though to call it an RPG feels inaccurate. It’s a match-3 game with an upgrade system. You fight an enemy army, trying to destroy their base, by summoning 3 types of units, repairing your base with utility tiles when the enemies destroy your unit generation, getting currency by matching specific tile types, and using cannon tiles to attack the enemy.

The currencies you get – and the game is premium without IAP – can go toward upgrades for your units, or for your base, with some actually modifying the function of the utility tiles that you get to give you shields or heal you. You play through 3 waves in each level, trying to beat all 3 (the last of which is a boss wave) in order to survive and advance. There are objectives to complete, too, which will throw a wrinkle into the progression unless you do certain things, like beating a level without having units disabled at all, for example. 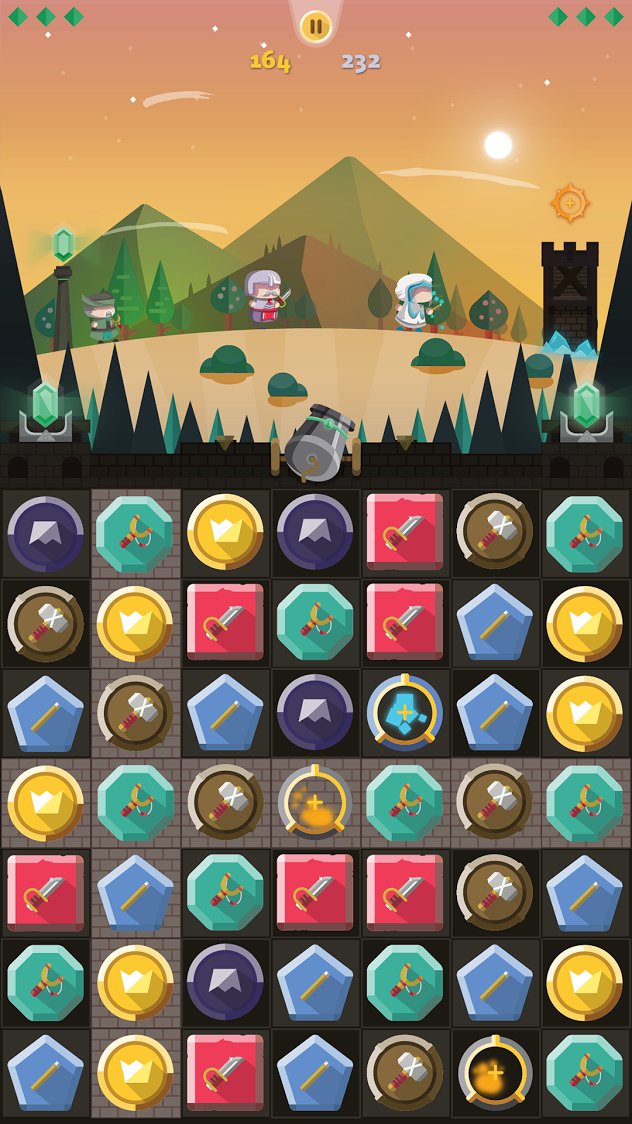 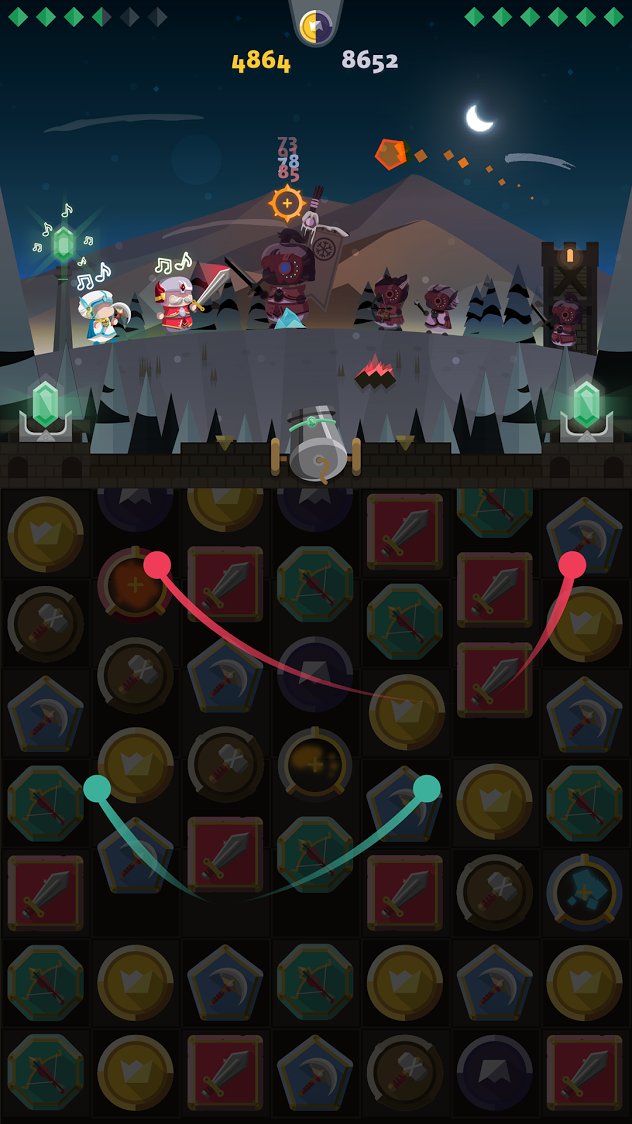 The match-3 mechanics are very similar to You Must Build a Boat ($2.99), but the structure is overall simpler, in that your upgrade system is simple enough just to increase the health and power of your units. It’s not a basic game, but it feels a bit more streamlined so that you can just focus on matching attacks. There’s a tug-of-war aspect to the combat, where you have to push back oncoming enemy forces, and make bigger matches to summon giant units. It’s not just about whittling down health, and even dire circumstances can be turned around with a good chain of matches.

The funny thing about The Long Siege is that the game is extremely long. It feels like the kind of game that would be good if it was a smaller fraction of the length that the game is right now, because the point of the game comes across well over time. I got to a point where I was playing just to see when the end was, because the game gave few indicators of when it was actually coming. The bosses keep alternating between different types, and there’s no indicator of progress beyond “the enemies keep getting more difficult" such that when you reach the end, it feels like it’s the volition of the game. Someone said “okay, this is how long the game should be" rather than it feeling like a natural conclusion of any sort. 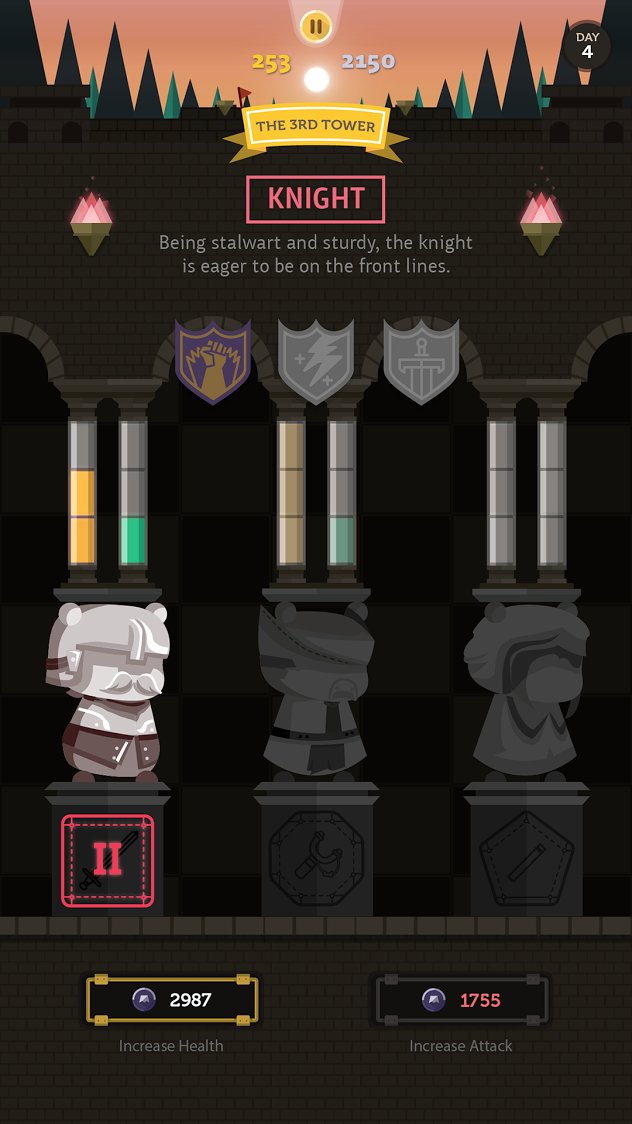 This could be addressed in a few ways. One would be at least providing an indicator for when the last siege is supposed to be, so at least it’s possible to know how long until the end is coming. Otherwise, some form of milestones, or a concrete goal to reach, like if you have to reach max upgrades to fight the final boss, would be appreciated. You pretty much have to get max upgrades to win, or at least close enough to that, so it’s not really like it would change much of anything. But for the player playing for the first time? I think that they’d appreciate a more concrete indicator of how long the experience will be. I know I’d rather not abandon a game with a definitive endpoint due to uncertainty.

I think the replayability could be helped with some added features, too. I’d love a new game plus mode, so you could run through the game with max upgrades, seeing how fast you could beat the game. Otherwise, there is a feature where you can play the game and have Game Center track how many days it took in-game to beat the game, but I think that’s only for the obsessed fans, and the ones who can make tons of matches at a time. If you’re good and are willing to put in the time, then go for it.

The cannons are an inspired game mechanic. They are rewards for making matches, but also serve as a way to let you control the game board and make further matches, as well as for their intended purpose of attacking enemies. While the game is generally set to a fast pace where stopping or slowing down will hurt you, there’s room for smart play. Triggering a freeze cannon or explosive cannon at the right time will help you win. I do like the cannon that stops you from generating new units in theory. It’s a great way to mix up the game. But also, I think the game needs to allow the player to freeze enemy unit production, as in its current form it feels unfair that you can’t deal it back to the opponent. Still, the fact that you have such weapons available to you, helps make The Long Siege‘s matching feel fun and inspired. Though, I would not mind if the game was a bit slower, more about smart-and-strategic matching instead of the frantic matching it is about now.

I’m critical of The Long Siege, but that’s because I love the core parts of it so much. The game is gorgeous, for one, though the music gets repetitive. I love the way that the game balances out upgrades between feeling simple but without lacking depth. And I like how the game overall feels like it’s got strategy without abandoning the matching part of the game. It’s still a match-3 puzzle game at the bottom of it, and while the genre is way overplayed, there’s nothing wrong with playing new ones every now and again. While the game is flawed, and I’d admittedly love to see a multiplayer version of the game, this is a solid match-3 RPG title.