It’s hard to turn any corner in the app store without bumping into a match three game clad in plate mail, wielding a sword, slinging some spells and grinding experience these days. Block Legend ($1.99), 1000000 ($2.99), Hero Emblems ($2.99), Dungeon Raid ($0.99), and even Puzzle Quest 2 ($2.99) back in the day. It’s hard to stand out in this genre, but shockingly, each of the games I listed is very different from the next, and there is a crazy amount of flexibility and variety in what you’d call a match three RPG. Guardian Sword (Free) from Picsoft doesn’t look like much at a glance, but under the surface lies a deep and strategic experience worth checking out. 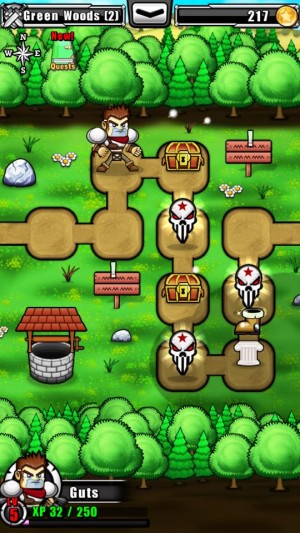 From the same developers who brought us Tiny Defense ($2.99), Guardian Sword is not without its charm. Mainly that charm comes in the form of the cheese that is the badly translated and juvenile dialogue, but no hard feelings meant there. It actually kind of sets this game apart from the rest. You play as a giant sword wielding protagonist named Guts. Probably an homage to Berserk and its protagonist, but nothing more. In the place of such an extremely dark fantasy horror epic, we have a chipper story about a guy trying to get the legendary Guardian Sword to take over the world. This Guts looks like he belongs next to Marcus Fenix in Gears of War, but he acts like a walking temper tantrum who loves to fight all comers.

The story bits can be a little grating at times in their brand of humor, but you can tap through the dialogue with great haste. The gameplay, however, is something surprisingly special. For the first hour or so, I kind of hated this game. I almost didn’t even bother reviewing it. It’s really freaking difficult in the beginning. And with IAP options for both the standard coin currency and the special gem currency, this game was telegraphing an impending freemium style pay wall like a giant Dark Souls boss. But it never comes. It’s the craziest thing. After a while, right around when you unlock the second set of gear to buy, the game just opens wide up. So trust me when I say you should stick with it. 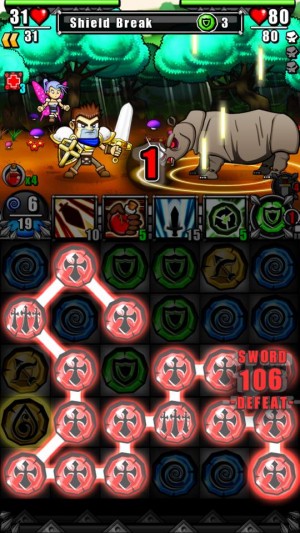 The match three style here is that of Dungeon Raid, where you draw lines across an existing board to clear three or more tiles, rather than moving any pieces around. The tile types are melee attack, crossbow attack, block, and mana. At least at first. What you don’t find out until a bit later, is that there are alternate tiles that are the same color as the main four, and add effects to your moves when combined. For example, both block and melee attack get an ‘all’ tile early on that lets you utilize every tile on the board in your move. A blue fire spell tile can be combined with the mana tile to let loose a magic hail of fire balls as an attack, instead of the standard of giving you more mana to use your special abilities. You also get one crossbow tile that adds a poison effect to your attack, and another that guarantees you’ll hit while also upping your chance for a critical hit.

In addition to special tile types that are used in play, of which you can only take 4, you also have only 4 special ability slots, 4 passive ability slots, and you can only take one partner into battle with you. Partners each have their own niche use. The fairy heals you every few turns, the phoenix blasts the enemies with magic, the golem helps defend you, and the wolf can only attack ground enemies, but is very strong and never misses, . They each get much stronger, with the fairy also curing all status ailments for example. Certain special abilities and tile sets synergize better with certain partners. There is so much more depth here than anyone would think at first glance. You also get upgrade points when you level up, which raises your health, mana, block, as well as both attack types. These are applied directly to the tiles, regardless of equipment. And each upgrade is massive, increasing effectiveness by a factor of two or three each time. 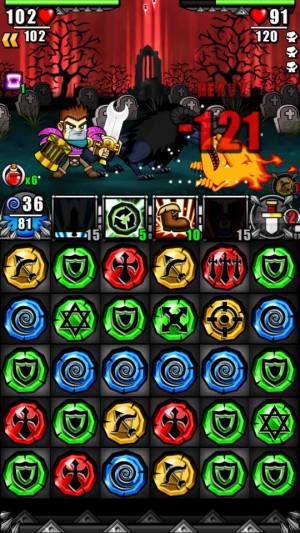 This all relates to the types of enemies you’re fighting. Some enemies are flying, and can only be hit by magic or crossbow. Others are on the ground, but are really obnoxiously good at dodging, so having a guaranteed hit attack is very useful. Enemies pop up with resistances to physical or magic attacks, and certain bosses really emphasize the need for strategy. One boss was immune to various effects and resistant to magic, so I switched up my tiles to get rid of magic, and swapped my now nuclear powered phoenix for the fairy. And don’t despair. You do eventually get a gravity ability, which lets you ground flying enemies and make them susceptible to melee attacks. This synergizes beautifully with the wolf partner.

Like I said, growth in this game is very rapid. A few levels and a new set of equipment can make the previous area seem like a joke. And I haven’t even gotten into the map and all the different areas, which is a whole other thing. You move Guts around the board, moving between larger map tiles from the over world. There are tons of little puzzles and blocks here, almost like a metroidvania, where you’ll need to come back to old areas with certain items to progress. For example, you have the rope, which lets you enter holes to look for items or go through hole tunnels, a hammer for smashing stone walls, a torch for lighting fires, a special item that turns you into an owl to go over gaps (best to just not ask why this doesn’t let you ignore the path) and so on. You’ll also find portals to make traveling the world faster, but you’ll need the special key to use them, before you get confused about that.

Sometimes this game can seem too random, as you might have a board full of melee tiles with a flying enemy, and you might have to waste a turn clearing them out. But this is all part of the strategy. Each enemy shows their next few moves, and how many turns they’ll take to charge up. Likewise your partner shows a countdown to their next move. So it’s all about planning. When to use your special abilities, when you can clean the board, etc. There is also a special ability that lets you remix the board for a very small amount of mana, so it’s good to keep that one in an active slot. Items like health potions and status effect curing items don’t take a turn, and you can use multiple items per turn. Try not to forget how insanely affordable health potions are. They’ll help you get far.

That’s not to say that you won’t have to train/grind Guts up a bit to a new level or new piece of gear to deal with particularly tough fights (There’s also an item for that). But you never hit a true paywall. It’s really quite fair, at least for the several hours I’ve put in. You can use gems to revive mid battle. That’s the main allure of the IAP. But you’ll get some gems just for playing, and many in our forums haven’t even used those at this point. If you’re willing to grind a little bit, like in the olden days, you’ll go far. You can also use gems to upgrade your equipment, by a LOT, so that’s another solution to get around tough bosses. While the art style doesn’t stand out as much, it makes great use of vibrant colors, and the music is also quite good. There is a lot to love about this game. If you ever feel stuck, change up your approach. You might be surprised at the variety. The developer was also kind enough to provide all the basic game info, tips, tricks, and even a walkthrough and FAQ right on the main screen of the game. Happy matching!