Rodeo Games has a niche, and they’re getting better and better at satisfying it with each new release. Their last game was a fairly well-received conversion of the classic Warhammer Quest ($2.99) board game, and their newest release is another Warhammer-themed turn-based strategy game. Of course, before all of that, Rodeo Games made their name with their excellent Hunters series of turn-based strategy games, and its from those roots that Warhammer 40K: Deathwatch ($1.99) draws most strongly from. This is basically Hunters 3, albeit with a Warhammer 40K skin. Some might frame that as a negative, but it’s been a few years since the last Hunters game. I’m more than willing to entertain a sequel at this point, especially one as high-quality as Deathwatch.

The Tyranids, an insect-like race of xenos, are invading, and it’s up to your team of space marines to put a stop to them. Hardly the stuff of Chaucer, but there are very few situations that need less context than bulky space marines versus giant bugs, if you ask me. The game takes place over the course of 40 well-crafted missions. A multiplayer mode is on the way in a coming update, but I obviously didn’t get a chance to test that, so file that appropriately. In each mission, you’ll have to complete a particular set of objectives, most of which will involve copious amounts of destruction. As you take down your enemies, each of your active team members will earn some experience points that can be cashed in for stat upgrades and new abilities between missions. 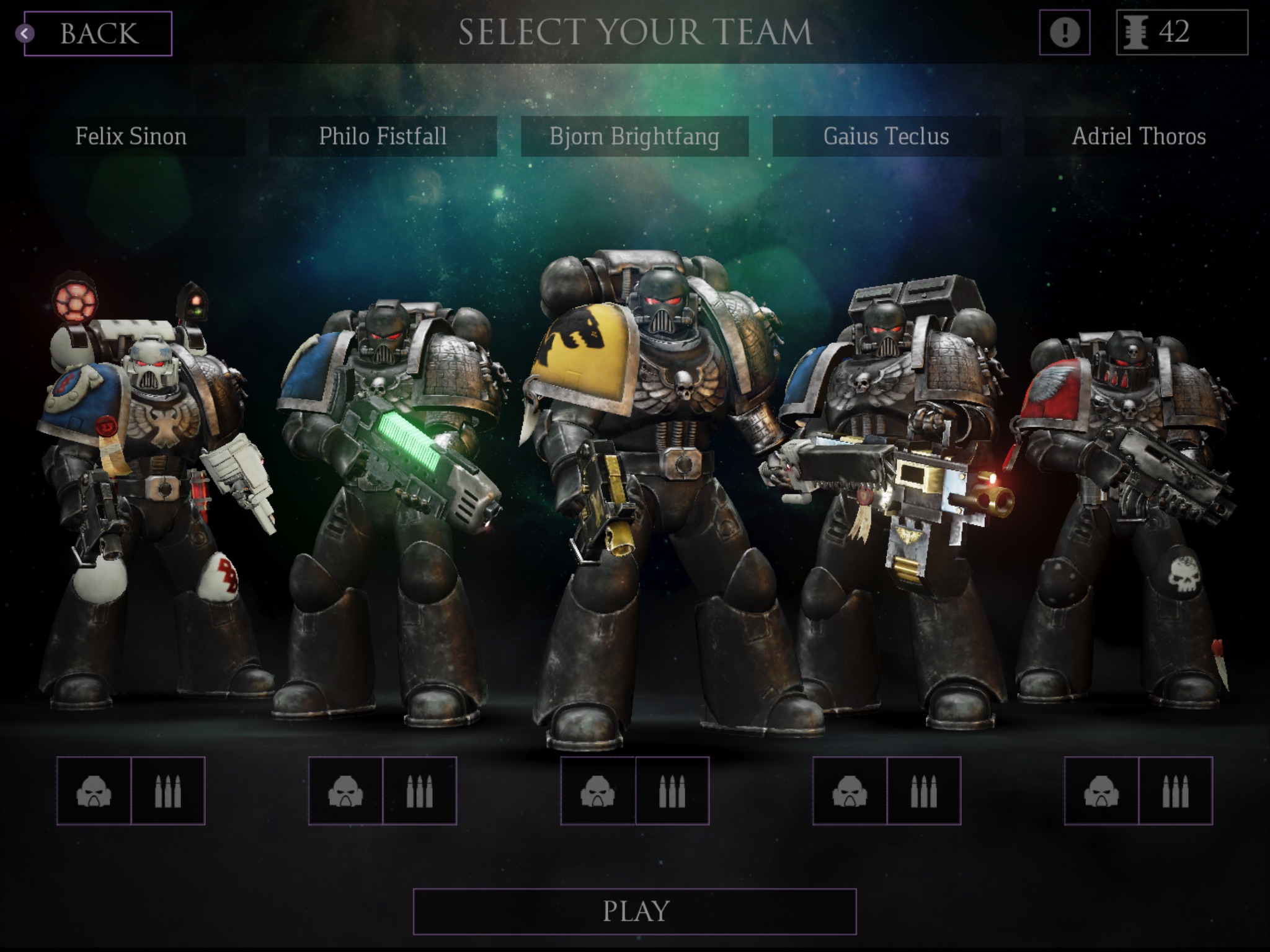 Completing individual missions will reward you with a random piece of equipment, and upon finishing the tutorial set of missions, you’ll get a pack of cards that will give you a new character and a couple of pieces of gear.  You can also buy extra packs of characters and gear whenever you like via the game’s only IAPs or through a currency you earn in-game. There’s a bit of randomness involved here, but unless you’re enormously unlucky with the packs you earn in the normal course of the game, you should still do alright. The card packs strike me more as a way to get one over on the game rather than being something necessary for progression, and the multiplayer mode will apparently level the playing field so that people can’t buy their way to victory.

A great deal of the fun in the game comes from collecting new marines and gear, unlocking their abilities, and trying to put together an optimal team. You need to consider a lot of things, including which chapter your marines hail from, their job class, and what kinds of weapons and equipment you want them to make use of. Many abilities are designed to work with members of the same chapter, but you’ll get more enjoyable banter if you take a mixed group out. The gear allows you customize the role of each member of your squad, while the weapon choices are plentiful enough to offer some interesting lateral choices beyond the usual climb up the damage ladder. 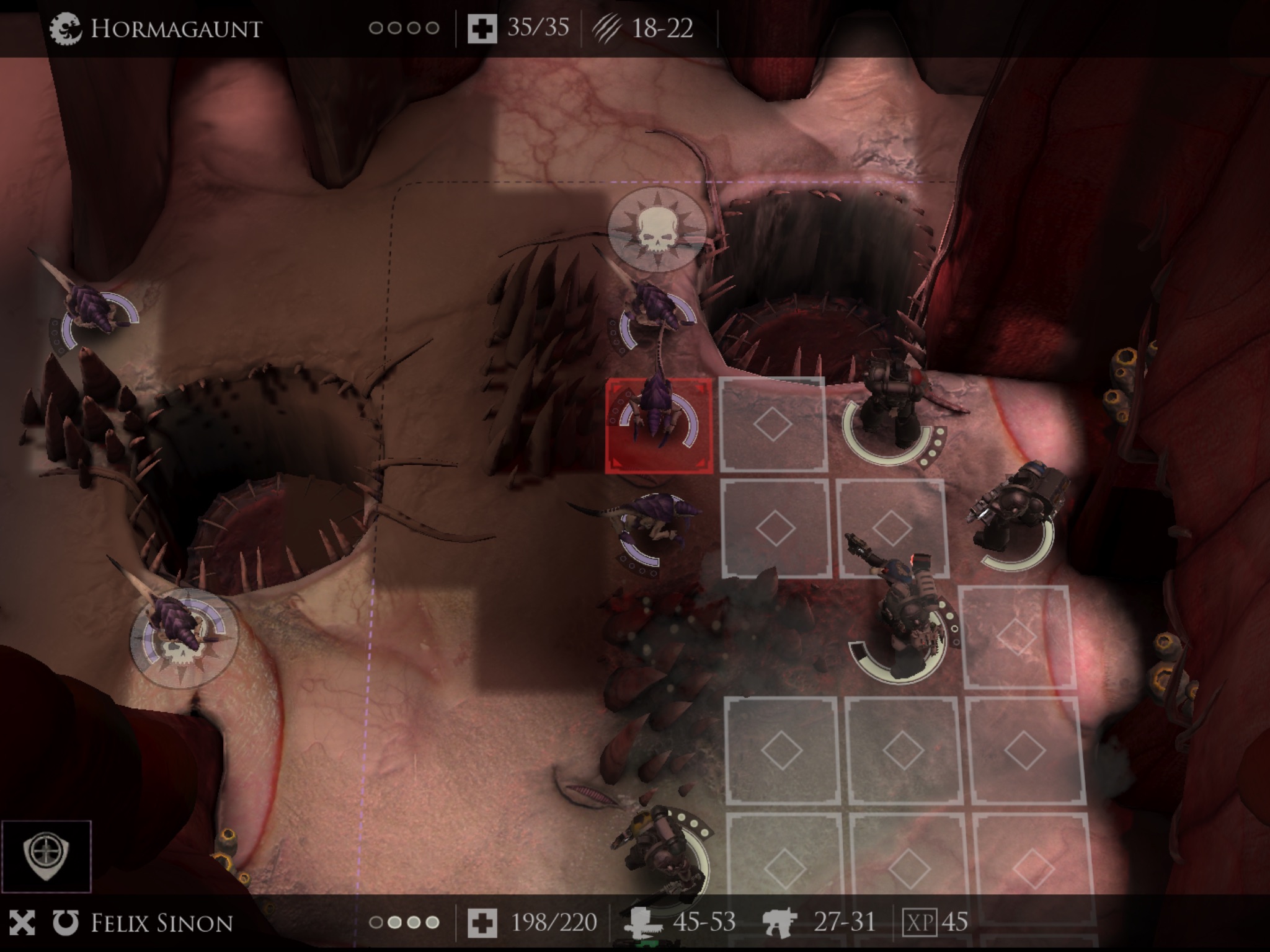 In case you’re worried about your carefully cultivated squad getting wiped out from a bit of bad luck or strategy, there is no XCOM ($4.99)-style permadeath in this game. Characters who fall in battle instead lose any banked experience, which can certainly be painful, but not as bad as losing everything. It’s an interesting choice that rides the line between the two generally opposed camps on permadeath. Early stat upgrades are cheap, but as you play on and want to unlock new abilities, gear slots, or more advanced stat boosts, you’re going to need to save up your experience points over the course of several missions, giving you ample chance to take a heavy loss. Personally, I think the system works well. It manages to evoke the tension that comes from having something to lose, but without the agony and potential showstopper of losing a vital squad member forever.

The moment to moment gameplay very closely resembles that of Hunters 2 ($1.99). Like that game, there’s a heavy emphasis on overwatch. For newcomers to the genre, overwatch is an ability where your character basically goes into proximity turret mode, shooting anything that enters their range of vision until their action points are spent. It’s a compelling mechanic used in some of the best games in the genre. It encourages slow, careful movement through stages, forcing you to anticipate where your enemy might attack from. Thematically, it’s a great fit for this sort of sci-fi game, calling to mind some of the more nail-biting moments from the Alien franchise, particularly in the many missions where your enemy attempts to overwhelm you with numbers. As each character’s action points are limited and you’ll generally want to save some to end your turn in overwatch, any missions where you need to make your way across the map are pretty slow-moving affairs. It’s made worse by the slow movement of your marines and the lack of a fast-forward button similar to the one found in Warhammer Quest. 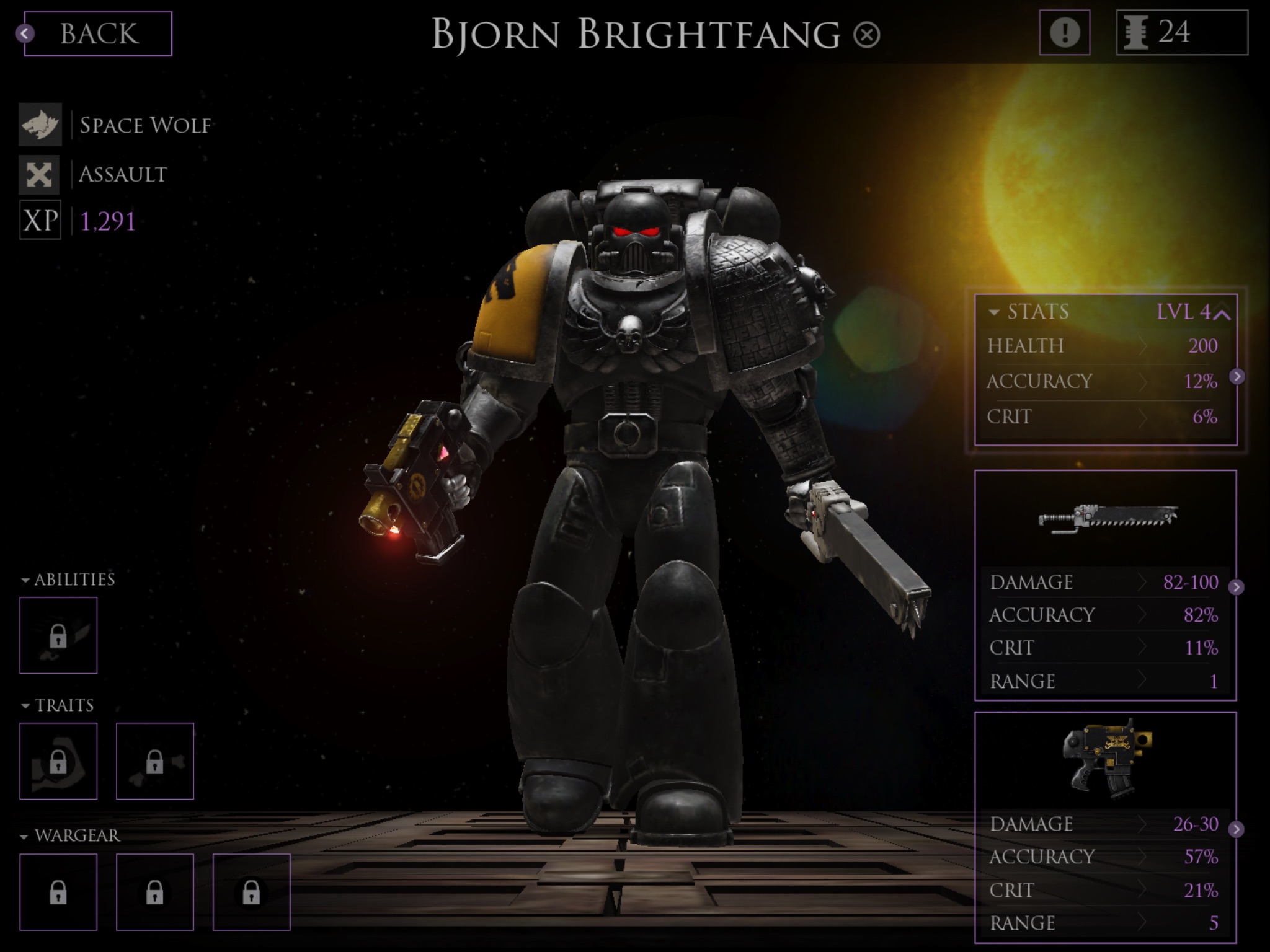 The overall slow feeling is at its worst in the early missions, especially on the lower difficulty settings. Once the game starts picking up, you’ll want to move at a crawl anyway, making the somewhat lethargic movement of your squad a lot less noticeable. With enemies constantly coming at you and popping out of sometimes unexpected places, you’re never left wanting for something to shoot at for very long. It reaches a point where you likely won’t be able to shoot at every enemy you want to on each turn, forcing you to prioritize targets.

In general, the mission design in Deathwatch is very well-done, which more than makes up for the basic mechanics being perhaps overly familiar. The construction of the maps is nicely varied, with lots of strategic options and possible routes to success or failure. You’ll have to deal with a pretty good mix of goals and objectives that test your group’s effectiveness in plenty of different ways. The enemy placements and the rate at which they deploy are well-handled, with lots of surprises and situations where you’re likely to just barely succeed. Rodeo Games has been at this type of game for a while, and their expertise shines through in this area more than any other, in my opinion. In comparison to the Hunters games, it’s like night and day. 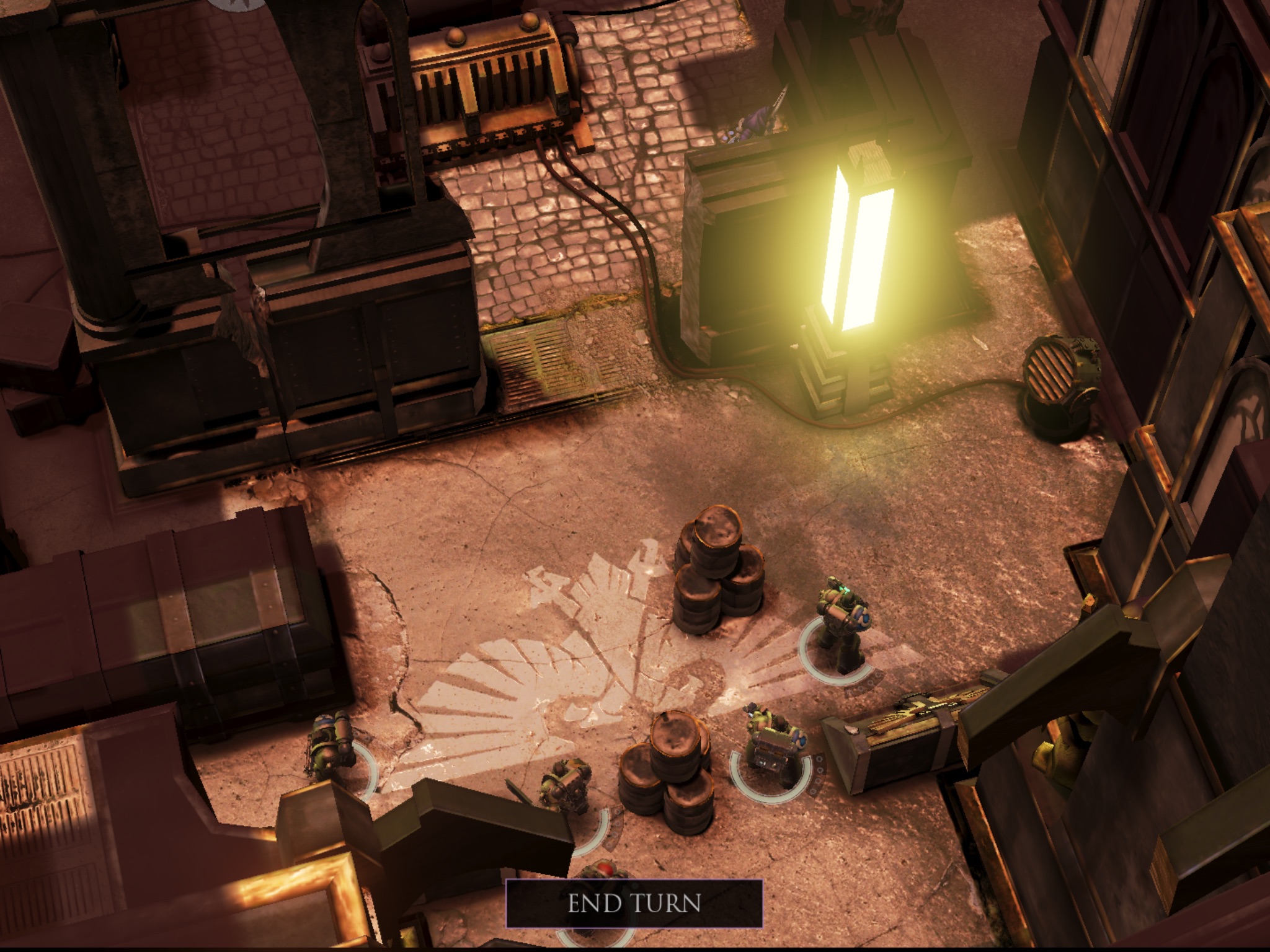 Even without the multiplayer in consideration, Deathwatch packs in a ton of content. The main campaign could easily run you 20 or more hours, and there are three different difficulty settings to do it all on. The difficulty balancing is a bit up and down at times, but you can always replay earlier missions as often as you want to beef up your squad if you can’t get past a particular mission. It’s worth it to see it through to the end, because the final set of missions is a true climax. On top of the campaign, if you get into collecting and fully training up marines, that will add even more for you to do, though it might get frustrating relying on luck to give you the ones you’re looking for. And of course, the multiplayer will be along somewhat soon, hopefully throwing in even more replay value.

One of the other strong points of Rodeo Games is more plainly obvious. The production values on Deathwatch are amazing, particularly when you keep in mind that they’re not porting down from a console version or anything like that. It looks a bit unimpressive in the useful top-down view, but drag a couple fingers down to skew the angle, zoom in, and prepare for a visual treat. It’s a shame so many levels are more or less unplayable from this point of view, but I still greatly appreciate that Rodeo gave us such extensive camera options. The sound effects and voice work hold up their end of the deal, with your marines sharing quips and having all kinds of conversations based on what particular mix of chapters you have represented in your group. Very little of it is plot pertinent, but it adds greatly to the overall atmosphere, and fans of the license are sure to appreciate the references to the greater universe. 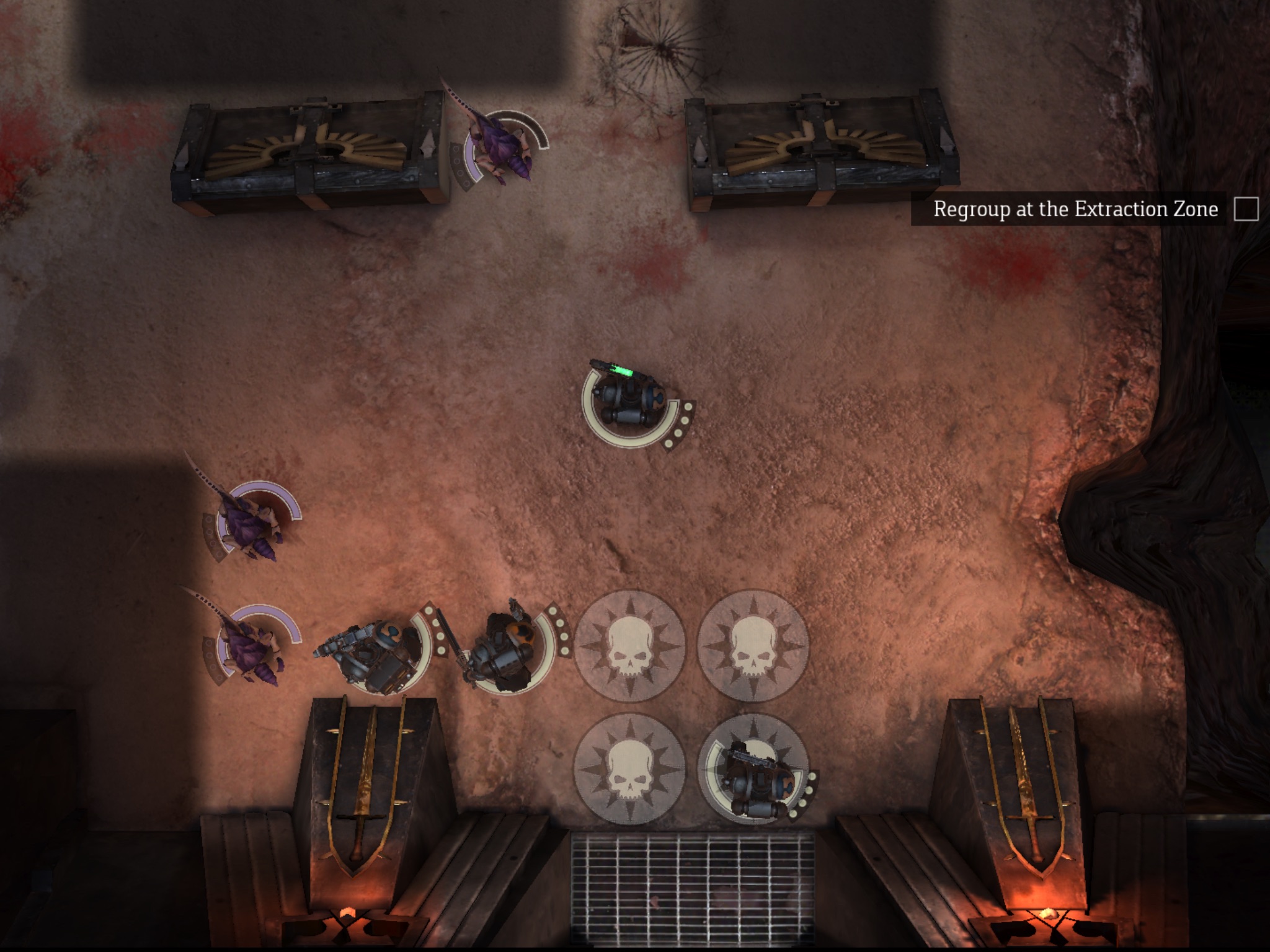 That comes at a cost, though. Deathwatch is powered by Unreal Engine 4, and it won’t run properly on anything less than an iPad 4 or iPhone 5. The install size is a hefty 1.5 GB, and there isn’t any support for cloud saving. The game also chews through your battery like you wouldn’t believe, so you might want to play something else if you’re going to be away from a power source for a while. The game also suffers from a few bugs at the moment. While I didn’t run into any during the course of my playtime, some TouchArcade forum members have reported the game hanging on the enemy’s turn occasionally, forcing you to quit the battle and start again. That would be a minor annoyance if not for the fact that quitting a battle is treated the same as losing it, meaning all of your marines will lose their banked experience. This bug seems to affect only a small percentage of players, but it’s certainly something to keep in mind.

Technical issues aside, I have a few other minor gripes with Deathwatch. I’ve already mentioned the lack of a fast forward button and the somewhat random nature of getting new gear and marines. Once you get a new marine, they’ll naturally be starting from zero, and it can take an awfully long time to get them up to speed with the rest of your group. Deathwatch is hardly alone in doing something like this, and it’s hard to counter it without damaging the enjoyable feeling of progression you get from raising your characters hands-on, but it tends to discourage experimenting with new recruits unless they’re considerably stronger than one of your existing members. While we’re on the subject of building your characters, some of the abilities seem to have questionable value, particularly given how much they cost to open up. I should stress, however, that these are all relatively small nitpicks on an incredibly solid experience. 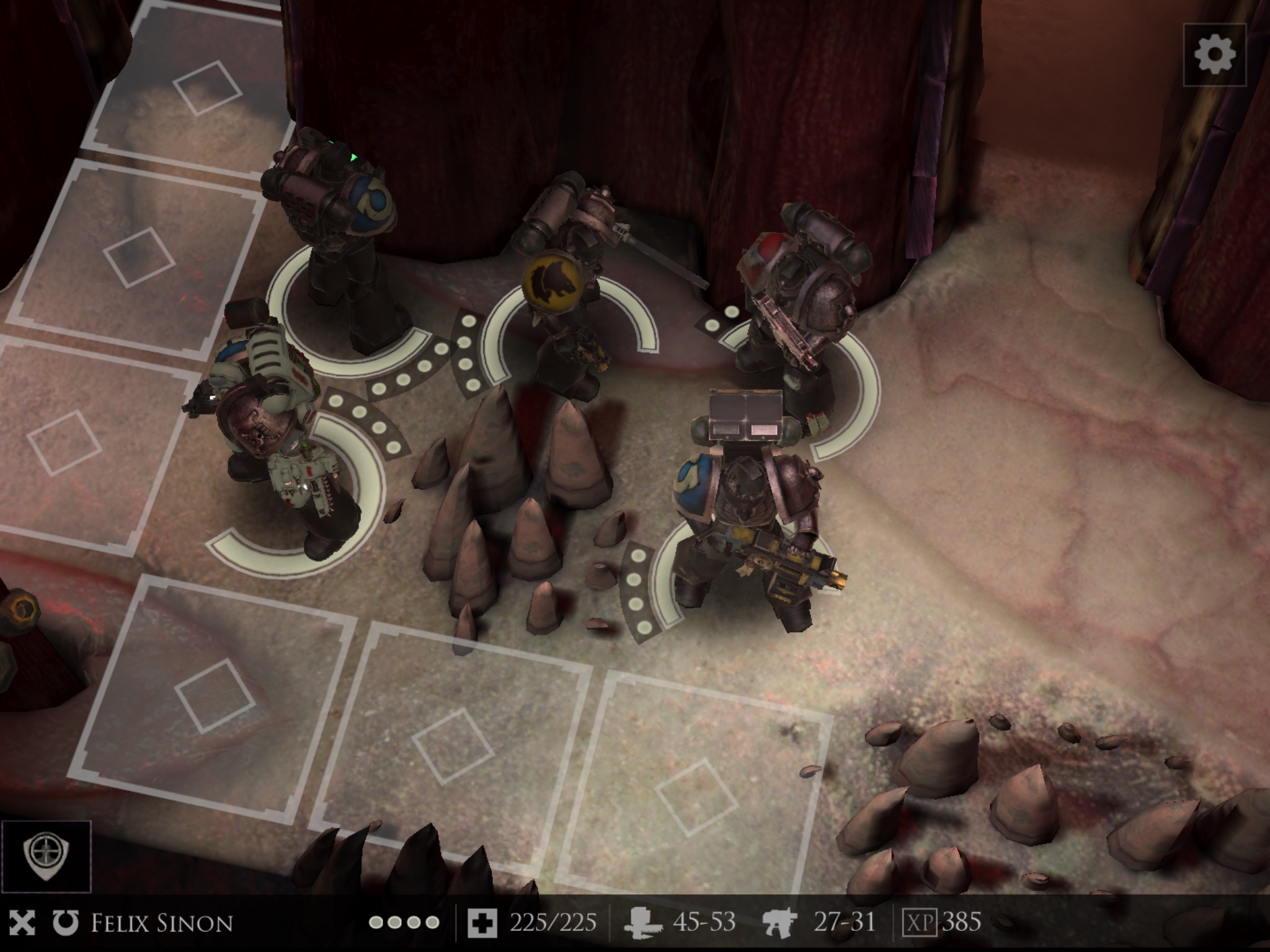 Warhammer 40K: Deathwatch is a gorgeous game with strong design backing it. The campaign is big and meaty, and it presents a fun challenge that will test your tactical skills. If you’re looking for innovation, you might not be as impressed with Deathwatch‘s safe, sturdy structure, but I found the game to be a real joy. It sucked me in quickly and ate away at my time at a shocking rate, causing me to take on “just one more mission" until my whole day had vanished. The team building options are enjoyable to play around with, and the system the game uses for its collectibles is quite fair all-around, allowing the player to unlock everything simply by continuing to play the game. In the case of a game as good as Deathwatch, that might be the most reasonable demand of them all.