Even though one of my biggest pet peeves is being shoulder surfed, I can’t help but sneak peeks whenever I can of what people have installed on their phones out in the wild. Double standards, whatever. Anyway, forum superstar jgeirge posted a thread today asking people to share a screenshot of their “best games" page or folder on their device. This sort of thing greatly satisfied my installed apps voyeurism without needing to even leave my house. 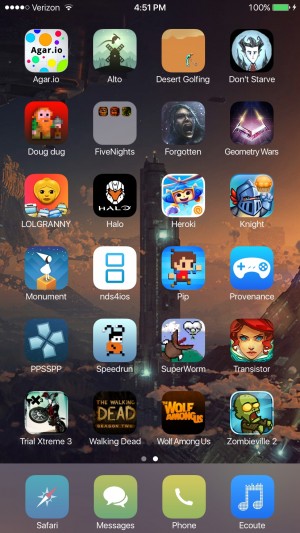 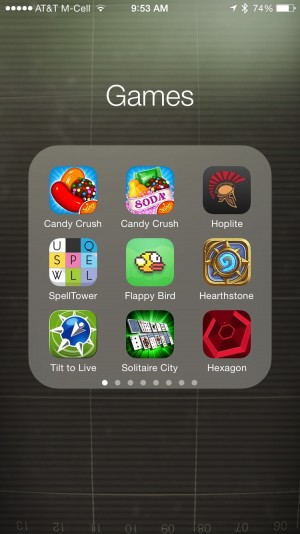 Jgeirge’s screen of games and stuff is on the left. He’s obviously jailbroken, evident by the numerous emulators, which is always the sort of thing that still continues to tempt me to jailbreak. I guess you sort of have to have all the Five Nights at Freddy’s games, Mos Speedrun ($0.99) is still amazing, and the rest of his homescreen is loaded with awesome stuff. I handle my homescreen a little differently, my screenshot is on the right. I install so many games on my iPhone that most of them just get checked out then eventually purged to make room for other stuff, unless they’re really awesome, then they get lost in the black hole that is my “Games" folder.

I play both of the Candy Crush games daily, for whatever reason Spelltower ($2.99) is my default go to word game. I always do the Hoplite ($2.99) daily stuff, similarly, Hearthstone (Free) daily quests are great to keep gold flowing in-game. Flappy Bird and Super Hexagon ($2.99) are my “I’ve got less than 30 seconds to play something" games, the original Tilt to Live ($2.99) continues to be one of my favorite games, and I think Solitaire City ($4.99) was the first game I ever bought on the App Store, there’s just something about playing solitaire.

Anyway, if you want to post a screenshot of your page of favorite games, head over to the thread in our forums. Also, we’re going to be doing a lot more to highlight interesting threads or other great discussion in our forums, and if your thread makes a “From The Forums" article on the front page, we’ll send you a bundle of promo codes for being an awesome member of the TA community!

Oh, and since this is a forums thing, front page comments are closed. If you want to comment on this story, do it in the forums.