Start singing “nahnah-nahnah-nahnah", and people will immediately think, if not yell out, “Batman!" Utter the words “and here… we… go", and the image of Heath Ledger’s excellent portrayal of the Joker clearly comes to mind. Similarly, if I tell you there’s a new LEGO Batman game, your imagination can likely fill in most of the blanks. The only surprises here are narrative ones, and they’re not really that surprising if you understand the usual LEGO game wavelength. LEGO Batman: Beyond Gotham ($4.99) is a fun game in the way most of the LEGO games on iOS are, but the series has pretty much exhausted all of its tricks by this point. If you’re okay with that, you’ll certainly get your money’s worth out of the new levels, characters, suits, and jokes.

As the title alludes to, this game takes Batman and Robin far outside of Gotham City on a universe-spanning adventure with the Justice League and a few other surprising allies. Braniac has brainwashed several Lanterns to assist him with a plot to shrink the Earth, and our heroes have to put a stop to it. The resulting adventure feels less like a Batman game and more like a Justice League game, but that’s not really a bad thing. As with previous mobile LEGO games, LEGO Batman: Beyond Gotham is based on the handheld version of the game, so you won’t find any impressive open worlds or anything like that here. Unlike the last couple of games, however, this version of the game doesn’t use an isometric viewpoint and limited lives, instead opting to go back to the standard third person style seen in games like LEGO Lord Of The Rings ($4.99) and LEGO Batman: DC Super Heroes ($4.99). If you die, you simply lose some studs and respawn. Most of the action stages from the console versions are in this version, though each one is cut into smaller chunks. You get two of the hub areas, the Batcave and the Watchtower, but none of the open world planets. 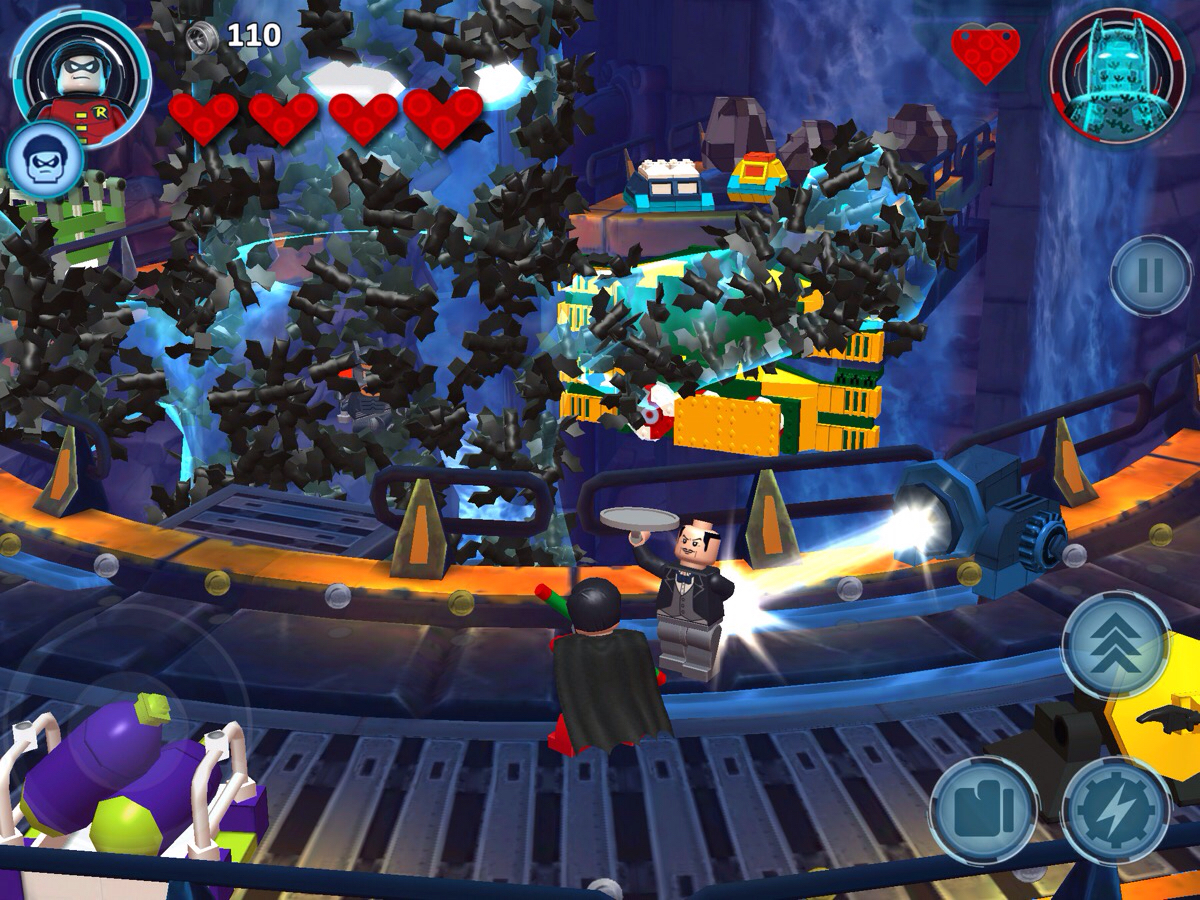 As with the previous game, the focus is mainly divided between simple combat, platforming, and light puzzles involving the various suits and powers each character brings to the table. There’s little challenge in any of it, especially since the game will fully spell out what type of character you need at the press of a button, but it’s good, clean, mindless fun. The non-Batman characters feel a bit less tacked-on than they did in the previous game, opening up earlier and available more frequently. In total there are 45 levels, with each one taking anywhere from five to ten minutes to finish. Since essentially every stage from the console version is at least represented here, the story doesn’t feel disjointed the way the last couple of games did. Granted, it’s not a great story, but it is very silly, and I personally feel that’s when these LEGO games are at their best. Rest assured Batman learns a valuable lesson by the end of it all.

The usual couple of control setups are available. You can use the gesture-based controls, which work well enough I suppose, or you can go the virtual buttons route. MFi controller support appears to be a little flaky this time around. Some controllers are working, some are partially working, some not at all. Some of the specific commands are a bit unintuitive and poorly-explained, but it’s not an issue most of the time. I found myself having to pull some weird twisty hands stuff whenever I needed to fire a ranged weapon using virtual buttons in threatening situations, but generally you can take your time to do what you need to. And even if you do die, it’s hardly a big deal in this game.

It’s not all sunshine and roses with the switch back to the old format, though. The enjoyable Tony Hawk-style goal checklist has been reduced to a shadow of its former self. There are still a few goals to shoot for on each stage, with character unlocks and other goodies rewarded for certain tasks, but most of the goals are boring “find X number of Y object and smash ’em" affairs. The interesting minigames that have shown up in the last few games are here, at least. There’s a hacking mini-game, shooting stages, and the somewhat pointless ones where you have to push blocks together in a prescribed pattern to build something, among several others. 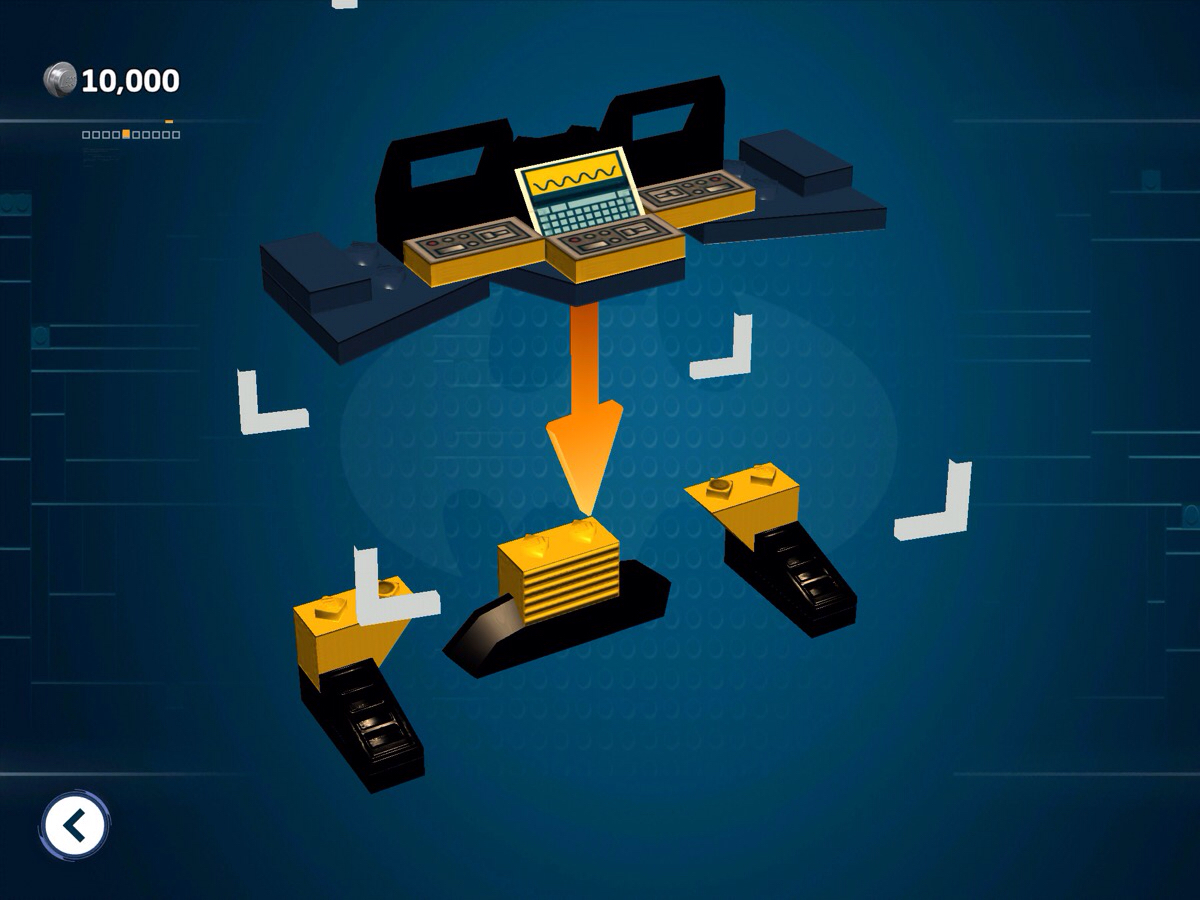 In addition to the humor, the big draw here is the massive list of playable characters. All the important ones are here, of course, along with obscure fan favorites like Ambush Bug, The Gray Ghost, and Etrigan. There are also some cool variants on the more popular characters, such as Solar Suit Superman, Batman of Zur-En-Arrh, and Clark Kent. Some of the other cool variants found in the other versions of the game like Batman Beyond and Adam West Batman are promised as future updates, but it’s kind of disappointing they aren’t in here from the get-go the way they were in even the other handheld versions. Still, with more than 100 characters to unlock and use in the current version, you’ve got plenty to play around with for the time being.

Now, I might be assessing things incorrectly here, but I feel like this game, unlike other iOS LEGO games, hasn’t had its economy jacked against the player compared to other versions. New characters are priced very reasonably and absolutely no characters or features are locked behind paywalls. You can buy the stud multipliers with in-game currency, even. Granted, if you want to speed things along, the game will happily sell you some gold bricks, but you definitely don’t need to this time around. Perhaps that’s a peace offering for this version arriving as late as it has.

The presentation is, of course, excellent. The graphics are sharp and everything runs fairly well outside of a couple of busy sections. There are tons of silly gags and cameos for sharp-eyed players to spot, some of them implemented with considerably more effort than I’d expect. All of the characters are fully voice-acted by plenty of familiar actors, and the Danny Elfman Batman theme and John Williams Superman theme are both here once again. The user interface is slick and clean, and the kind souls at TT Fusion have even seen fit to give us iCloud support. Unfortunately, the old lack of a mid-level save bugbear is back again, so tread lightly if you need to close the app while you’ve got a level in progress. 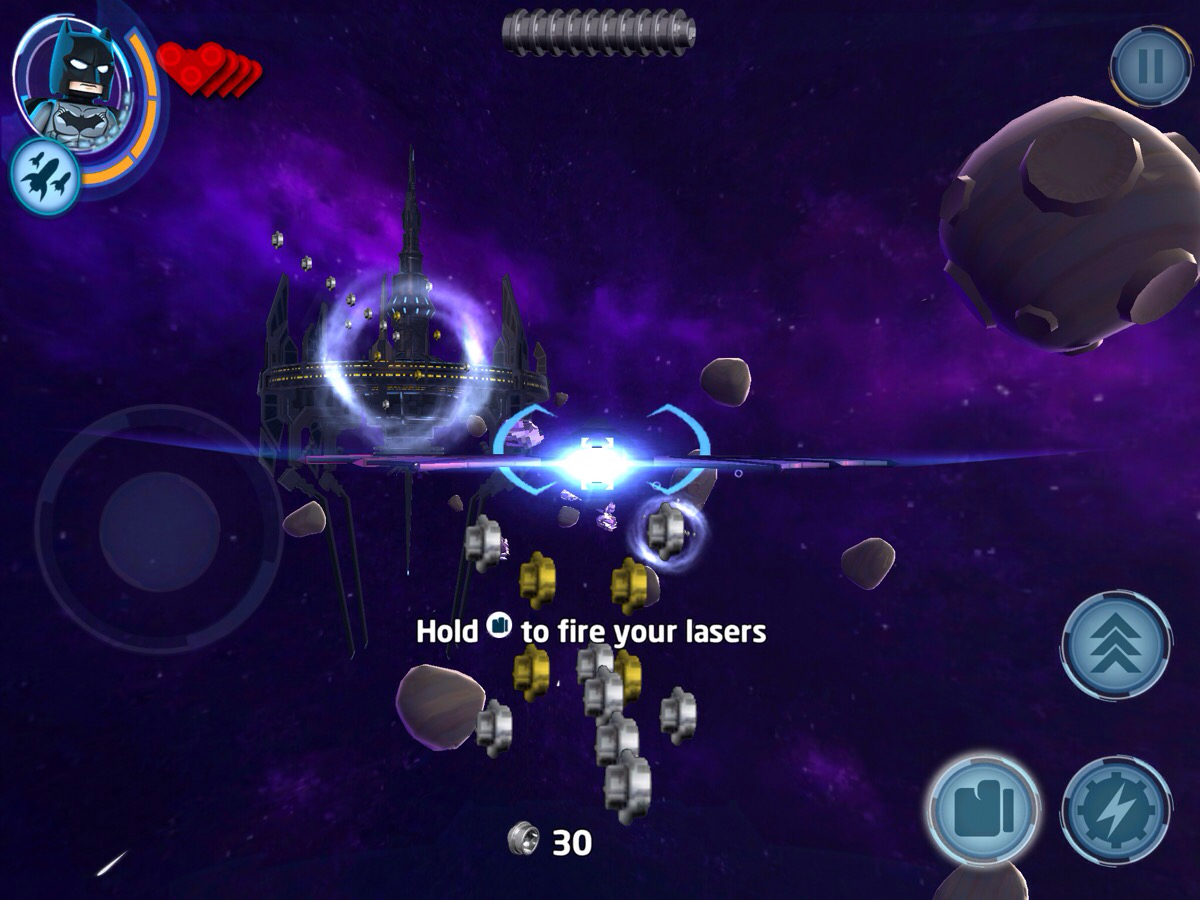 I suspect many people will be happy to see that LEGO Batman: Beyond Gotham has reverted back to the old style, and I think I’ll go ahead and agree that it was probably the right call for this game. The loss of the open world doesn’t hit this game quite as hard as it did LEGO Lord Of The Rings or even LEGO Batman: DC Super Heroes, and its story and characters are fun enough to keep you entertained even while you’re doing the same old smashy-bashy we’ve been doing the whole series long. DC fans in particular will have a hoot with its nods and winks, while everyone else can enjoy a decent, if not terribly exciting, action game.