Fresh off their recent launch of new permanent records and characters to unlock, the folks at Square Enix and DeNA have already restarted their weekly event that offers an opportunity for players to earn new characters and loot. This week’s Final Fantasy: Record Keeper (Free) event sees the launch of ‘The Fire Crystal Awakens,’ which is a Final Fantasy V based event focused on the heroic attempts to save the Fire Crystal from exploding (spoiler: they fail). Lenna Charlotte Tycoon is the big reward for participating in this Collector’s Event and we’ve got the tips and strategy needed to make it an easy endeavor.

Similar to Aerith’s event that we covered last month. ‘The Fire Crystal Awakens’ is a Collector’s Event that has players collecting magicite and then cashing them in for various rewards (Lenna’s unlock being one of them). There are a few differences and improvements with this Collector’s Event, however. First, there are a few more difficulties available in terms of Easy + and Normal + difficulties that do a decent job bridging the gaps between Easy, Normal and Hard difficulties. I personally like the additions because it adds two more difficulty levels that can be played through to get First Time and Mastery Rewards. 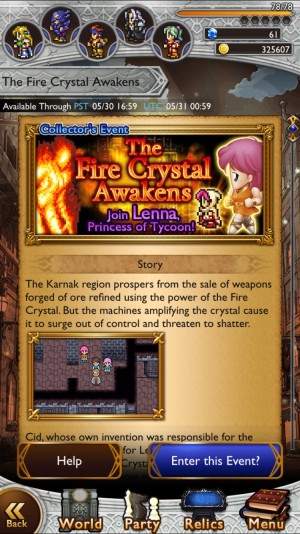 In addition, some of the loot potential has been modified, with players able to pick up a Hyper Wrist and some other cool 3 star accessories that can act as a significant upgrades. In fact, if your heroes are still sporting Power Wrists, I highly recommend picking up a few upgrades. The highlight on the accessory front is a four star Fire Ring for 6000 Magicite that offers some precious fire resistance. Otherwise, the standard array of orbs of various levels are available, and I’d recommend simply looking to see what abilities you want to unlock and pick up the orbs you need to get there.

If you’re looking for the bare minimum to unlock Lenna, it’s as simple as playing through Easy, Easy + and Normal to earn enough Magicite to unlock her (you can also just play through Normal and earn the Mastery reward to earn the requisite 1500 Magicite). Players with a decent amount of stamina and the requisite team of 25-30 leveled players can get this done in a short period of time.

Collector’s Events lack the variety of other Record Keeper events and this extends to boss battles as well. In fact, ‘The Fire Crystal Awakens’ really only has one boss that appears in various strengths. Liquid Flame isn’t the toughest boss out there (even on Hard difficulty) but he has some quirks worth talking about.

Liquid Flame has three forms: human form, tornado form, and hand form. Depending on which form he’s in he has different elemental absorbs and counters. Both human and tornado forms are vulnerable to Ice and absorb Fire and Wind (along with resisting Water and Poison). Hand form basically resists or absorbs everything, so when he’s in that form pure physical attacks are the only viable option.

Meanwhile, Liquid Flame also counters on nearly every attack which makes him tough. He either casts a fire attack on all party members or casts Fira on one party member. His regular attacks also include the dreaded Blaze, which deals proportional damage and be tough to deal with. This is definitely not a battle to go into with auto attack on as he can easily take down a whole team with his AoE fire counters.

As for how to deal with him, the best thing to do is to take advantage of the fact that he shape shifts after every damage attack. Don’t queue up attacks and just make one attack per form (and obviously, make it one that counts that he’s vulnerable to). He’ll take the damage, counter once, and then shape shift. At that point, you make sure the next attack takes advantage of any vulnerabilities in his new form, and so on. While you’ll still have to deal with his counters, you shouldn’t have to deal with his normal attacks as the ATB gauge resets with each form shift. Play it safe and strategic, and Liquid Flame should go down with relative ease. 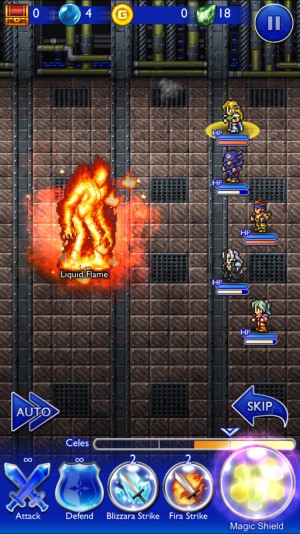 If you were to take a glance at Lenna’s level 50 base stats, you’d see that Lenna is best served as primarily a healer. True, she ends up with a high magic stat as well, but if you’re really looking to min/max the potential of characters, healing is the way to go. You wont be able to get far with her from a magic standpoint anyways, as she can only use 2 star black magic but can use all (up to 5 star) white magic. Her starting Soul Break also focuses on healing (mass regen), which is a very useful healing tool. If you manage to get her Soul Break weapon, you can also unlock Royal Devotion, which is an awesome Soul Break that will instantly revive an ally with full HP.

In terms of equipment, Lenna can use Hats, Robes, and Bracers for armor and is restricted to Daggers, Rods, Bows, and Staves for weapons. Obviously, Lenna isn’t going to be a physical damage dealer in any shape, so I’d recommend equipping the highest starred Staff to increase her mind and equip some white magic (go with Dia or Holy if you need her to contribute on the damage front). She’s not very versatile but as far as healers go, you could do far worse.

‘The Fire Crystal Awakens’ is available through 31 May with an ability to cash in rewards until 2 June. Thus, if you’re looking to add her to the team I recommend you get to it. Meanwhile, we’ll be keeping an eye as always on the next character event in this excellent freemium RPG.