Dragon Blaze (Free), by producers Gamevil and Flint, is as fun as it is aesthetically pleasing. It sports a brightly colored world, intricately detailed backdrops, and characters animated with a puppets-on-a-string feel. The game opens with a pretty generic prologue, the extent of which is relatively unnecessary. The gist of the story is that Deathcrown the “King of the living and the dead,” has returned from banishment with an army of dragons, intent on opposing the humans and their ruler, King Gram. The main character is then tasked with unraveling the true story that lays beneath the war between dragons and humans, including the mysterious death of the princess and a royal plot that is darker than first appears. 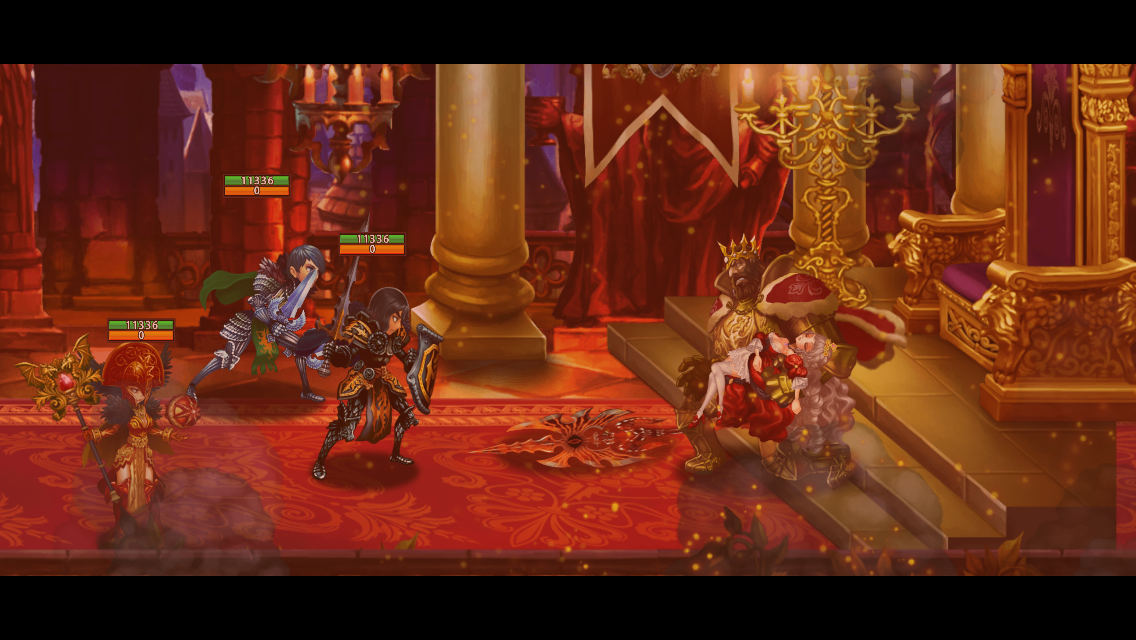 The player can pick from a list of classes: warrior, archer, priest, mage, and rogue. Like most games, each class has its advantages and disadvantages. Dragon Blaze lets the player choose up to 5 main characters, which can be switched in and out of the party on the home menu or in the “settings” tab. Each character’s story will progress individually but the equipment and allies you collect in one account will automatically be attached to any other main character you control. The first 3 character slots are free, the last 2 can be purchased for 99 “rubies,” which can be earned throughout the game or bought as an in-game purchase. I was able to experiment with the warrior, mage, and rogue, but my primary game used the mage character, so most of my point-of-view is framed with that in mind. 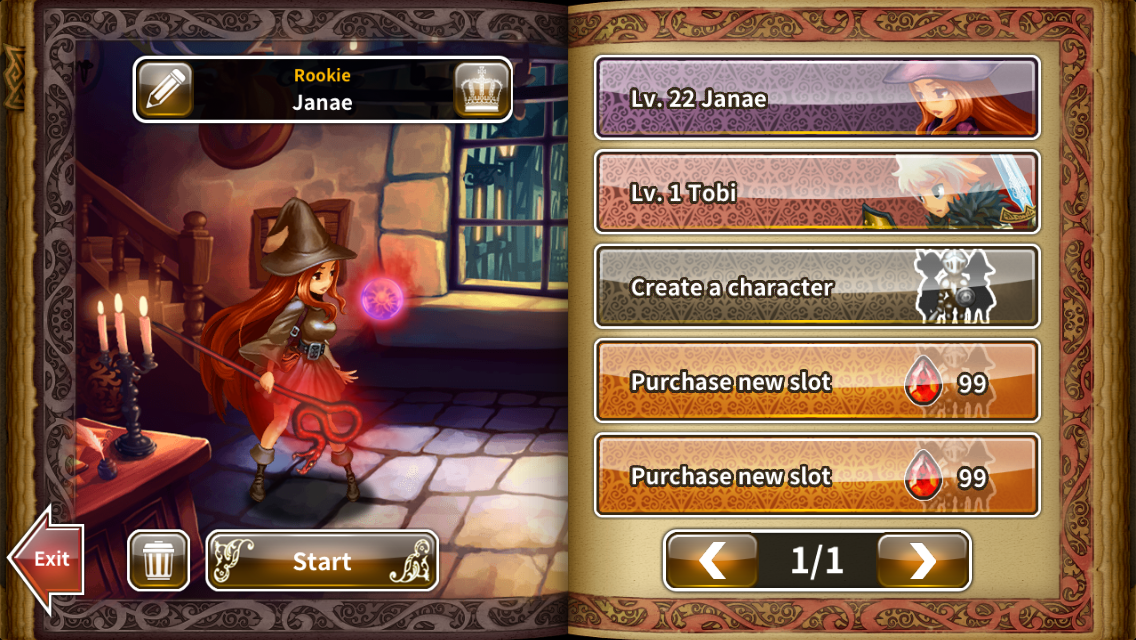 Assigned quests, given to the player by a NPC named Bell Snow, center around clearing a series of dungeons, each with a “pathway” of around 4-6 stages. Each stage typically contains 3 battle encounters. And can we talk about the soundtrack? The battle theme will be stuck in your head for ages. It’s one of those games best played with the volume way up. On the other hand, the combat system is very independent from player control for the most part, so it makes for good background stimuli while watching TV or surfing the web. 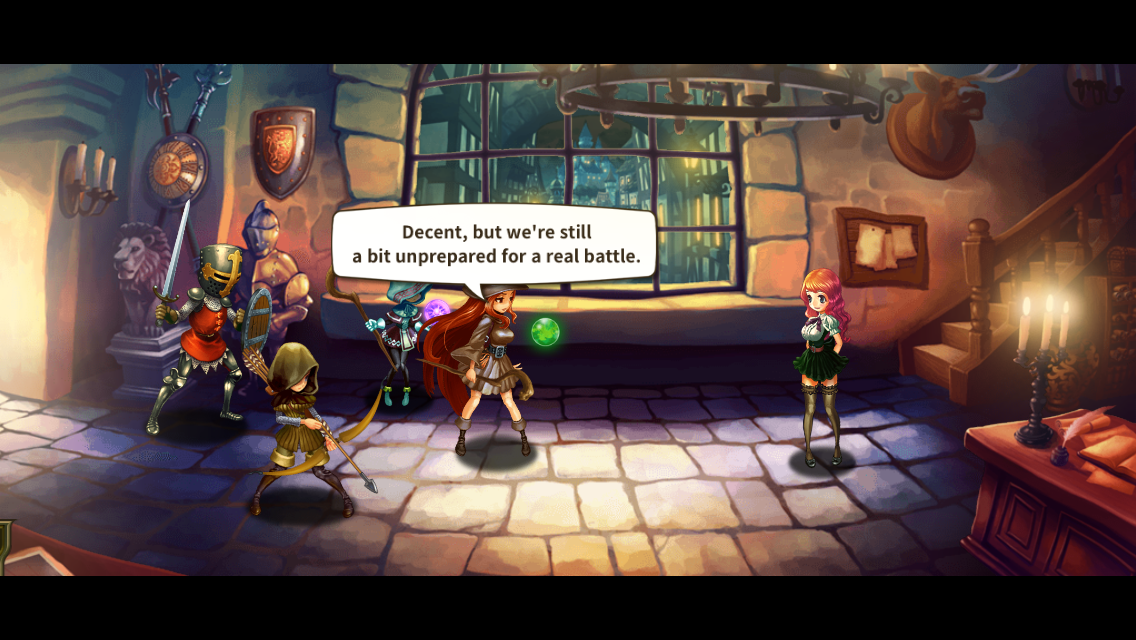 The game’s battle tutorial is pretty sparse and the actual combat sequences can be quite confusing and overwhelming at first. Everything plays out quite quickly and my one critique of the system is the lack of control the player exhibits in battle. The MC will attack on his or her own, without player interaction. As soon as you enter a stage, you can literally walk away from the game and it will play through without you. For those who like a bit more involvement, you can turn off “auto” for special skill usage and the player will then be responsible for instigating special attacks. The player is also responsible for using potions and revival items, which can be set to their “Pouch” in the Inventory menu. Only 1 out of 3 Pouch slots are available initially, the others must be purchased with rubies. I would highly recommend opening a second Pouch slot as soon as you can, so that both potions and revival scrolls can be equipped simultaneously. 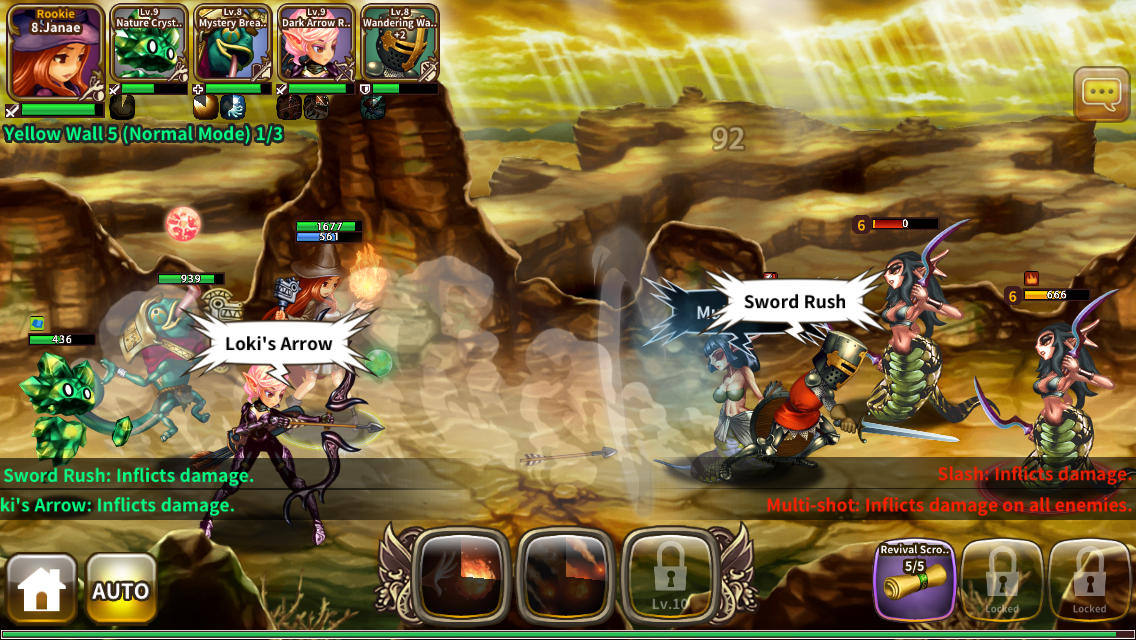 It’s actually in the Inventory menu where the “real” game takes place. This is where the player can equip weapons and armor and upgrade equipment through the “Enhance” function, which merges two or more items to create strength bonuses and add extra skills. I found the alchemic approach to upgrading inventory one of the most engaging aspects of the game. The player can travel with up to four additional allies, which means there is a lot of opportunity to mix and match various item combinations with different classes. Once you figure out what item best merges with what other item (blue-framed items have a 100% success rate when merged with other blue-framed items, and so on) inventory play is quick and interesting. 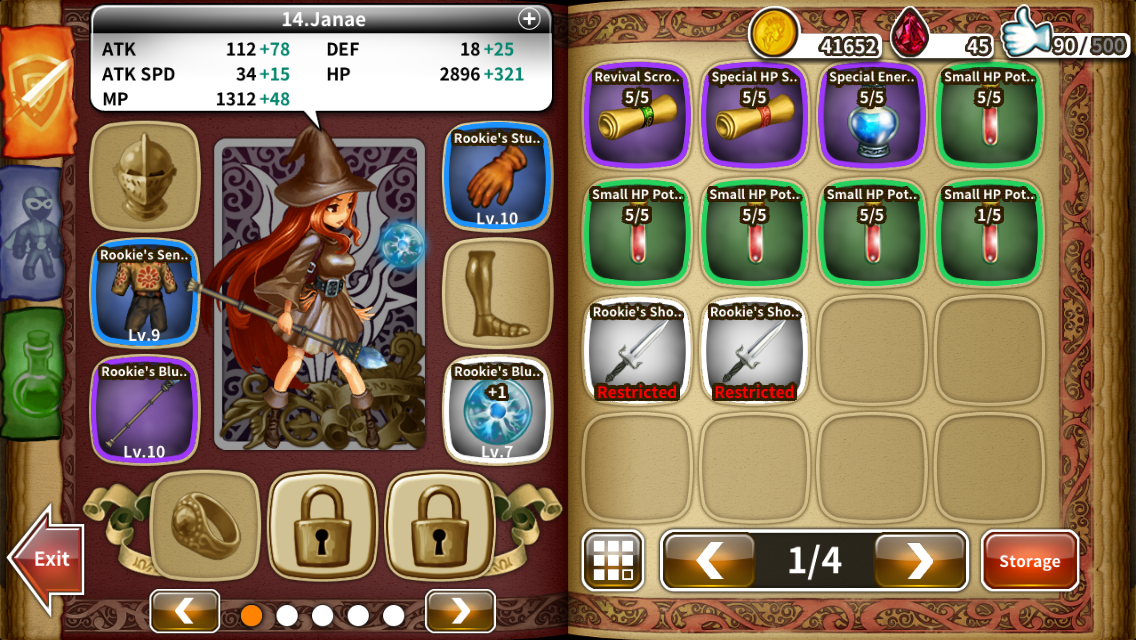 Allies are mainly collected from battle victories, in-game purchases (“rubies” or dollars), achievement rewards. Equipment and allies can also be summoned using “Friend Points,” which are gathered through interactions with other players in the game. Between managing your Inventory, Allies, and Friends List, you will be able to prepare for boss battles, arena challenges, and the “Labyrinth” side quest. The game relies very much on strategy and planning and leans less so on in-battle gameplay. There is a ton to do outside of battle, though. You can battle other players in the “Arena,” make or join a Guild to participate in events and challenges, and complete mini quests to get rubies, equipment, or rare allies. So if you don’t mind being a little more hands-off during combat, Dragon Blaze has a lot to offer.