I was recently reading a science fiction novel that featured a central character who argued against the idea that consciousness is a good thing to have. On the surface that sounds absurd, but think about it a little deeper. Computers absolutely demolish us when it comes to things like math and chess, and some of our most creative ideas come when we’re sleeping or thinking of other things. Your brain stem is an incredibly quick chunk of meat, and it could be argued that consciousness just slows it down. Imagine if self-awareness was required to remove your hand from a hot stove, for example. Yikes. 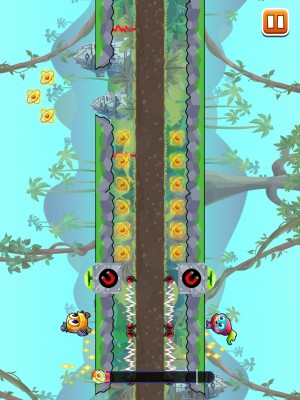 It may seem silly bringing such a weighty topic into the review of a cartoon-y game about cute robots, but I couldn’t help but think of it while playing Insomniac’s Digit & Dash (Free). It’s a reaction game that tasks you with controlling two characters at once on either side of a vertical level, and I could feel my conscious brain letting me down with every failed tap of the screen. If only I could be more… machine-like. Pure reaction with no pesky awareness getting in the way and mucking things up. I guess what I’m trying to say is, this game is hard. It’s really, really hard. But it’s hard in a good way: satisfyingly challenging, with every single mistake being your fault and yours alone.

You play as the titular Digit and Dash, two robots in love trying to defeat the evil hot dog person who split them up. (These things happen, alright?) On the left side of your screen is Digit, and on the right is Dash. They run from the bottom to the top along what is essentially a straight line with various traps and enemies along it. Tapping on either side will force that robot to jump over an obstacle. Pretty standard stuff. However, the two robots can also work together to clear greater obstacles, and that’s where the game really starts to get clever. While one robot is in the air, you can tap again and they’ll slam into the “ground” and send the other robot into an even higher jump. Those are your main moves, but you can also bounce on enemies to get even more air, and jump on various buttons that act like power-ups. 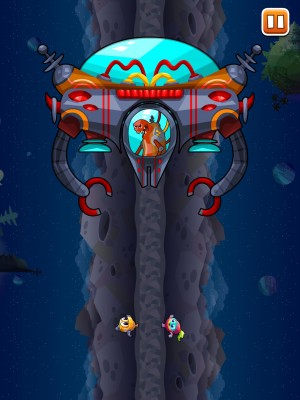 At first it’s a bit overwhelming, and feels a little like patting your head and rubbing your stomach at the same time. Eventually it’ll all click, though, and you’ll be sending the robots over obstacles and bouncing off enemies with the greatest of ease. Except that you probably won’t, because the game ramps up the difficulty incredibly fast. (And just to pour salt in the wound, after you finally pass a level it’ll helpfully tell you how many times you died on the way toward your goal.)

The game has five worlds, each containing five levels and one boss fight. If you really hate yourself, you can try to get three stars on each level by revisiting them and collecting all the letters and golden atoms. Good luck with that.

Yet, as brutal as the game is, it’s undeniably fun. It just feels great to play. Even right now, as I sit here writing this review, I’m itching to dive back in and get my ass handed to me on a silicon platter a few more times. It looks and sounds pretty darn good as well, for an overall package that is very well worth the two dollar asking price (and no IAPs!). I do wish it had an endless mode with Game Center leaderboards, but that’s just me gettin’ all greedy. What’s here is awesome, and you know what? I’m glad I’ve got my consciousness to enjoy it.