It would be awfully easy for me to say that if you liked Knights Of Pen & Paper ($4.99), you’ll love Knights Of Pen & Paper 2 (Free). When I first started playing the game, I know that’s how I felt. If I had called it quits an hour or so in, I might have walked away thinking this was a marginally improved, safe follow-up to the original. Fortunately, or perhaps unfortunately, I stuck it out to the end, and while I think fans of the first will probably enjoy this game and get their money’s worth out of it, Knights Of Pen & Paper 2 is in my opinion a step down from the first game in several ways.

For those who might be unfamiliar with the franchise, Knights Of Pen & Paper is a streamlined turn-based RPG that has you take on the role of various odd characters who are playing an in-game RPG. This unusual theme is used to poke fun at tropes of the genre and as an excuse to drop in pop culture references every few minutes or so. The actual mechanics of the game couldn’t be more meat and potatoes as far as the video game type of RPGs go. You travel to a location, pick up a quest that always involves killing a certain number of things, you travel to another location, fight the things in turn-based battles, then head home to collect the reward and buy new stuff. The original game was created by Behold Studios, who just put the finishing touches on their latest game, Chroma Squad. Since they were busy working on that game, another developer, KYY Games, stepped up for the sequel. 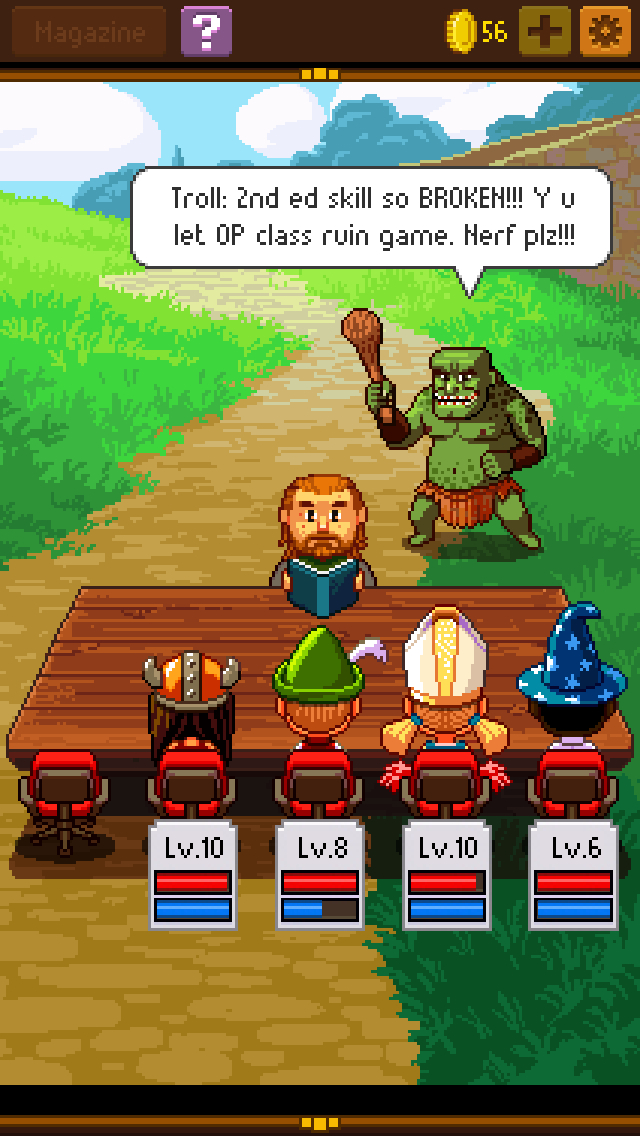 Things start off well enough. You can make two characters for your starting party, and in addition to selecting a job and stereotype as in the first game, you can also choose a fantasy race. The stereotypes are mostly different from the first game, and make a bit more sense. You won’t have your elderly teacher joining the game this time, for example. Granted, they basically just copied and pasted the lineup from The Breakfast Club, but it works. Each stereotype will have some sort of passive ability they bring into the game with them, along with their own stat modifications. Races work almost identically, just adding another layer on top. There are only a few to choose from at the moment, with only humans, dwarves, and elves showing up for the party. As for the job classes, it’s a somewhat limited selection that grows both as the game progresses and as you go out of your way to unlock things.

Almost everything you do in the game results in spending coins, just like in the first game. If you want more than two party members, you have to spend some change. If you want to unlock certain job classes or stereotypes, you’ll have to save up. Everything from traveling, resurrecting, and even searching areas consumes coins. In the beginning, it might seem like the game is nudging you towards its coin IAPs, but just as it went in the original, your coin earnings scale up pretty quickly. You’ll have more than enough coins to unlock whatever you want by the later part of the game. It can be rough early on when you’re trying to upgrade equipment and such, but it all smooths out over time. 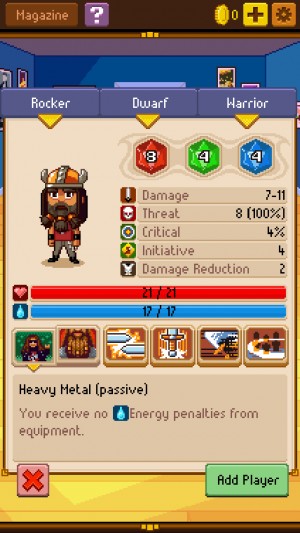 As the game gets going, it all feels very familiar. You’ll engage in battles where you can select the number of opponents you’re comfortable facing, earn level ups that allow you to sink points into one of four skills, and watch those lovely percentages on each location begin their climb to 100%. The jokes are a lot less bizarre than those found in the first, and I can’t decide if the game is better or worse for that, but at the very least, you won’t have much trouble catching just about every reference it throws out. The story on the whole is a little flat, involving your group of characters hunting down the Paper Knight, a 2nd Edition character who is causing all kinds of trouble in Paperos, a 1st Edition world. You’ll pursue him across several locations as you watch NPCs pluck all kinds of low-hanging fruit, and it’s never quite clear if the whole plot is just imaginary or if the real world is being affected somehow.

There are a few new mechanics in play. First, certain locations have special effects that might apply to battles fought there. For example, battling in a town might have a random chance of a thief joining the tussle at the beginning of a round, while fighting in a hot place might give your characters a burn effect. You can also search around in most locations, which costs you coins but awards you with treasures if your dice rolls are lucky. Another big addition is dungeon exploration, which has you going room by room dealing with random situations until you finally reach your goal. The idea is good in practice, but it’s tremendously underutilized, only showing up a few times in the course of the entire game. Equally half-baked is the new crafting system, which replaces the previous game’s equipment forging. Add a few items together and a new one pops out. You’re required to do it for a quest at one point, and I’d be surprised if most players ever touched it again after. You really don’t need to. 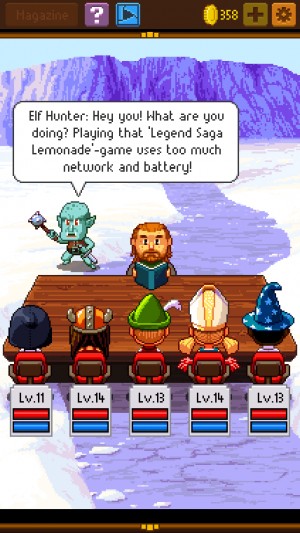 Knights Of Pen & Paper 2 is significantly shorter and easier than the first game. It doesn’t take more than a few hours to complete just about everything, as far as I could find. Some of my locations aren’t showing 100%, but I can’t find any other quests to do, so either they’re well-hidden or something is buggy. There are some secrets you can stumble upon while you travel, which I suppose might fill out those last percents, but for now they haunt me. In that few hours of playtime, I didn’t do any grinding other than fighting the battles that quests required, I only upgraded my gear once or twice in the beginning, and I didn’t buy any of the extra game room features until the very end. My final levels were around level 20, and I made short work of basically every encounter except the one you’re meant to lose. The first game could be a real grind at times, but it at least threw a challenge out now and then to keep you awake. That’s not the case here. Less grinding, for sure, but when the actual battles aren’t difficult, doesn’t that make the whole game a grind?

Much of the problem is tied up in skill balancing, or a lack thereof. When you check your potential skills for your characters, it’s not hard to spot the gamebreakers. Compared to the first game, there is a much bigger divide between useful skills and useless ones. With the right characters and the right skills, I’d venture to say you could turn this game on its ear with a two-character party, and without much trouble at that. The cleric and the hunter are particularly overpowered, with clerics able to heal the whole party, remove status effects, and restore huge chunks of mana all in one action, and hunters able to rain death on the entire enemy party as long as their mana holds out. Which it will, if you have a cleric. I suppose you could purposefully limit yourself, but even with the worst skills, I can’t imagine the game as it stands being all that difficult.

Simply put, Knights Of Pen & Paper 2 feels less complete than its predecessor does. It has less content by a good margin, the balance is completely off, and many of its interesting new systems are almost never used or even fleshed out all that well. Just about every other aspect is either the same or better in the first game. There are improvements to the presentation, most notably allowing you to play in landscape mode if you want to, and the English reads a lot better than it did in the original, but that’s about it. With the original game riding pretty hard on its novelty factor, the sequel really needed to step up to compensate for the fact that we’ve played something awfully like this before, and it doesn’t make a good case for itself.

Knights Of Pen & Paper 2 is close enough to the first game that you won’t have a bad time playing through it, but as a sequel, it’s pretty disappointing. If you’re going to deliver more of the same, at least make it more, you know? Worst of all, I have a feeling that was the original plan. The PC version of this game was supposed to launch on the same day as the mobile version, but it was delayed at the last minute to November. That’s not a short delay, and it makes me feel like there’s meant to be more here than there is. And perhaps there will be, down the road. For now, though, this is without a doubt a lesser game than the first, and a much more bland experience overall. Fans of the first might enjoy what it has to offer, but depending on why they liked that game, they just as easily might not. At the same time, it’s too close to the original to please those who weren’t on board with it.