Fans of DeNA’s Final Fantasy: Record Keeper (Free) will notice that the freemium RPG didn’t have a new timed event this week. Instead, players that logged in over the weekend were met with the English version’s second large content update.

This update saw the debut of records from Final Fantasy VIII and Final Fantasy XIII, as well as additions to the records already available in Final Fantasy I, II, III, V, and X. In terms of difficulty, these new records are in continuation of the game’s last content update, so you’re going to be seeing battles with difficulties that start in the mid-20s and extend all the way out to the low 40s on classic (with a significant increase in the elite equivalents). In terms of success, adherence to our general guide is a must. Otherwise, players have all the time in the world to level up to the strength necessary to succeed. 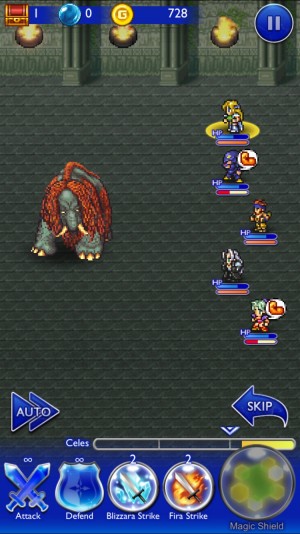 In terms of loot, players are looking at 2 and 3 star orbs of a wide variety across all the new battles. However, the real value is in the new character records that can be unlocked through playing through all the classic dungeons. Across the new content, players will eventually unlock Final Fantasy II’s Gordon, Final Fantasy XIII’s Snow, Warrior of Light from FF1, and Luneth from Final Fantasy III. Three of the four are derivatives of melee/fighter classes, with Gordon being the only new unlock with some magic potential.

In addition to the loot and character unlocks, this content update has the potential reward some massive stamina crystals and mythril, which are the most important collectibles in the game. In fact, if you play your cards right and get enough masteries, you should have a stamina meter in the high 60s and over 50 mythril (which would let you get the 11 for 10 special on the rare relics). The game also provides a preview of the next content update, which will include missions from FFVII, IX, and XII.

The content update is available to any players that have previously completed all the other classic records. In addition, DeNA’s also running a mythril special that rewards one mythril per day for logging in through the end of the week, sweetening the deal for checking out the content as soon as possible. Meanwhile, we’ll be keeping tabs for the next timed event, which should be later this week.