Stop me if you’ve heard this before — a new jump-scare horror game is coming out, and it’s set in an asylum. As a child of the 90s I’ve had my fair share of mental ward scares, and Lost Within ($3.99) is no exception. Despite the overdone premise though there is something there, and well crafted touch controls certainly helps its case.

Ah, the old Weatherby Asylum — the site of many a murder and torrid affair. It might be a shadow of its former self, closed down due to an unknown incident, but it’s up to you, an officer of the law, to check it out before it’s set to be demolished to make sure no one has holed up inside of it (cue the spooky music). You’ll accomplish this with touchscreen controls, tapping where you want to go within the confines of a first-person view. 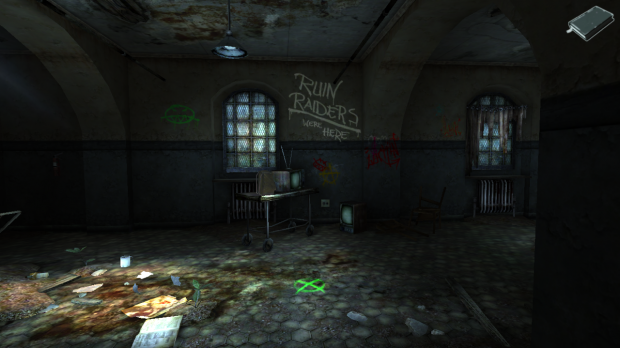 I was happy with how well this worked, as you can literally tap anywhere you want to go to head towards that direction, or double-tap to sprint. Tapping objects will interact with them, and swiping to any side will allow you to turn. There’s a limited inventory system that also allows you to tap at the UI to access it, and as a whole, the HUD is fairly reductive, which is a plus for this type of game. It’s that easy, and I had no problems with the controls at any point in my adventure.

Where Lost Within shines is its ability to tell a story. While it provides typical jump scares and rather generic enemy models to deal with, the narrative of the asylum is worth looking into, and soon you’ll learn to ignore all the heavy breathing and start searching for documents that detail the building’s history. The actual spoken dialog is kind of throwaway, but the in-game tomes and lore bits are particularly engaging.

The more you find the more pieces of the puzzle start to come together, and the attention to detail is accented by the wonderful engine, where you can read writings scrawled across various rooms, and so on. The concept might be age-old, but a lot of care was put into the production as a whole. By the end, Weatherby Asylum stood out in my mind as a memorable location.

I’ve tested it on both a Kindle Fire HD and iOS, and I have to say I prefer the former, possibly because it was co-developed by Amazon Game Studios, making it a more native environment. It feels a bit smoother and the visuals pop a bit more. However, the iOS edition, reviewed here, plays great on both an iPhone 6 and iPad Mini.

Lost Within isn’t going to shock you, or even surprise you with new concepts that you haven’t seen before in the horror genre, but it will at the very least intrigue you. The setting has been done a million times before but that doesn’t mean it can’t work, and the occasional frustrations are worth sitting through to get to the good bits.