Samurai Games is not from Japan, but if you play their upcoming bullet hell shoot ’em up, Operation Dracula, you might think they are. Developed by a team with the lead developer in Morocco, but others in the US, this game, being published by Crescent Moon Games, could prove to be one of the most accurate representations of the Japanese bullet hell shmup outside of Japan when it eventually releases.

What I mean is that Operation Dracula is aiming for a very particular over-the-top style, where the title of the game is shouted out by an announcer, and each characters name is proudly stated. There’s loads of games like this, and you see plenty of these games from companies like Cave, even on the App Store. There’s bullets everywhere and tons of colors. But Samurai Games, made up of a bunch of decidedly non-Japanese names, have made one of the most accurate approximations of this unique style that I’ve seen outside of Japan.

The game has you controlling the ships of one of three characters, with the goal being to fight wave after wave of enemies, dodging fire with your small hitbox. You have bombs you can deploy, along with the special ability that can be charged up, and varies depending on the character selected. It’s a familiar setup for shmups like this, but it nails the look and feel of how these games should be. There’s colorful bullets everywhere, ridiculous character profiles, everything feels like overload, and is in your face constantly. Even the name Operation Dracula makes no sense whatsoever! It’s absurdity as a video game. 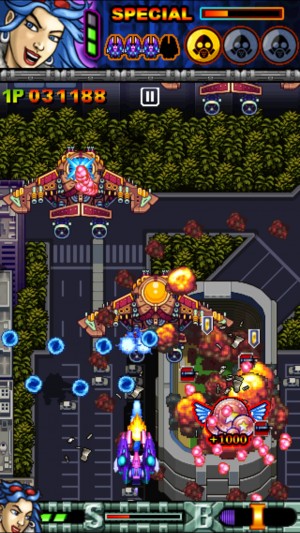 The difficulty is a bit welcoming at this stage, which is a bit of a surprise because these kinds of games wind up being north of impossible. This game is still very difficult, but it’s at least somewhat doable. While I had some trouble beating the first couple of levels in previous playthroughs, I wound up finally being able to beat them in the video I recorded. Thankfully, you have a credit system which helps you get a few extra shots at progressing. It’s definitely not easy at all, and will require a lot of practice to get good at. I mean, it is a bit more accessible than many similar games.

But still, it’s super-cool because the game looks amazing, runs great even in pre-release form, and provides that sensory overload that the best bullet hell games do. The controls are 1-1 touch-and-drag controls that work well. It’s just an overall solid package. There are some interesting IAP options where you can buy one of the characters and buy extra credits, but as a pre-release build, these are subject to change.

This one has been kicking around in some form for a while now, there’s evidence of the game existing since 2013 but Crescent Moon Games has picked it up for publication. It will be interesting to see how the shoot ’em up crowd at large takes to this. It’s definitely a solid game, and it nails a lot of its genre’s conventions. But I’ll be interested to see if Operation Dracula manages to appeal to the hardcore fans of the genre. At least on the surface, it nails the aesthetic it’s going for.