This week’s Final Fantasy: Record Keeper (Free) content update from DeNA comes a bit earlier in the week than what we’ve seen so far since the game launched worldwide. While last week’s update was a significant expansion of the game’s permanent mission structure, this week focuses on another timed special event.

Monster in the Lethe is an event that takes place in Final Fantasy VI and retells the tale of how Sabin, Edgar, Terra and Banon escaped from The Returners hideout after South Figaro was invaded by the Empire. Of course, you won’t be able to use any of those characters but the final reward will at least offer you the opportunity to unlock the record of one of those heroes. Being a Collector Event, Monster in the Lethe is a very linear experience similar the previously released Of Shinra and Legends and Light Against the Darkness events. However, the event itself feels a lot easier than previously ones (or maybe it’s because I have some pretty high levels in my main party now). 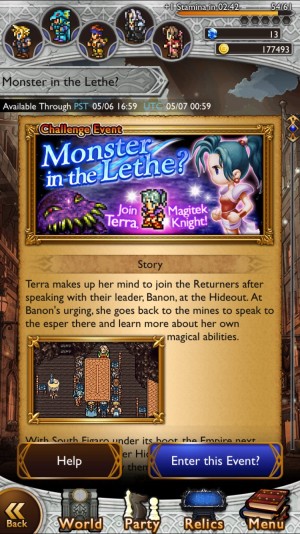 Regardless, we’ve compiled a few tips for those that need a little edge in unlocking Record Keeper’s newest character, Terra.

Continue Playing After Picking up Terra

For folks playing at home, Terra is your hard-earned reward after the 7th area of this Challenge Event. However, I highly suggest that you not rest on your laurels and keep going to hit mastery on everything. The last few areas have high stamina requirements and do have enemies that are a little tougher, but the rewards are worth it. For example, a Hero’s Ring and Lesser Summon Orbs are some of the rewards you get during the Lower Stream Branch while the Lower Stream has a Hyper Wrist as a mastery reward. Both the Hero’s Ring and Hyper Wrist are items that you’ve probably not seen so far and make excellent accessories for outfitting you team. Finally, the Estuary holds an incredibly rare Major Black Orb, which is a five star rated orb that can be used towards crafting Flare.

You’ll encounter bosses at the 2nd, 4th, 5th, 7th, 8th, 9th and 10th battles. While I found the vast majority of the bosses to be pretty simple with a souped up team, here are some quick strategies for each of them in turn:

Orthros (5th and 7th and 10th battles): Fire and Lightning are his vulnerabilities while he will absorb any water-based attacks.

Anguiform (8th battle): He has no weaknesses or strenghts, just hit him with your strongest abilities and he should go down. Gravity also works if you have it.

When it comes to Rhizopas and Orthros, their repeated encounters do get more powerful, but for the most part you can employ the same tactics. 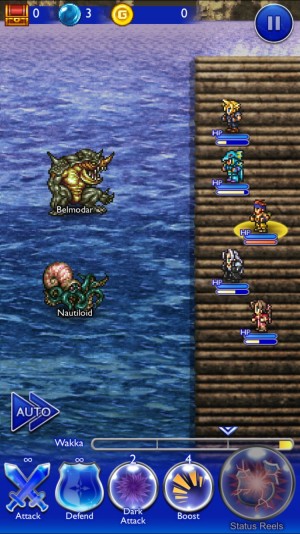 Lightning and Fire Are Your Friends

As you may have gathered from our brief foray into boss strategy the majority of the enemies in Lethe River are susceptible to both fire and lightning based attacks. Thus, it’s in your best interest to create some of those abilities, hone them if you have the orbs, and make sure they’re equipped for the long haul. Obviously, Thunder, Fire and the -ara spells are key, but don’t forget the Spellsword abilities as well, as they have the potential cause some massive damage. I found that dark attack was somewhat effective as well, but when you take into consideration that a lot of boss battles have you fighting against multiple enemies, it’s probably not as effective as one would like.

Terra at a Glance

Terra is an interesting character due to her versatility. She can equip daggers, swords and rods, meaning that you can make her a decent damage dealer or equip her with the tools necessary to boost her magic attacks. She also has a lot of diversity in terms of armor as she can wear hats, helmets, light armor, regular armor, robes and bracers. In terms of spells, she can equip the most powerful black magic in the game (up to a rarity level of 5) and can equip most of the standard white magic spell as well (up to rarity level 3). She can also equip support abilities, which can be found in the ‘Physical’ tab when creating abilities. While most players will probably stick her with some spells in he open slots, she can also be made into a pretty decent fighter, especially if you pick up her Soul Break equipment, Enhancer.

In terms of the Soul Breaks themselves, her default Trance Attack deals physical damage to one target (while in the trance form that she became famous for in FF VI). If you get lucky and score Enhancer, her Soul Break lets her go trance and then cast fira on all enemies, doing some crazy spell-based damage.

Overall, Terra offers versatility that isn’t really found in the other mages. While she may not have the highest raw magic, she does have the potential to outshine her mage equivalents from an attack power standpoint. It all depends on how you want to use her. If you have some high end equipment that she can use that puts her at an advantage, I’d probably start her over another mage, or maybe even use her as a nice replacement for an attack dealer. At the very least, she makes for a good tank mage combo.

Terra’s event is available through May 6th, so if you’re thinking of picking up this sought after Final Fantasy VI character, I suggest you dive in now. Meanwhile, don’t forget the massive content update that recently release, which lets you pick up Cyan amongst a few other heroes.