We announced early last week that Carcassonne ($4.99) has released a mega pack of it’s expansions on the cheap. After playing around with the various new rules, it’s safe to say that your gameplay experience can vary pretty wildly depending on which expansion you use. If you are an avid board gamer, you know that there are certain games you just cannot play with someone who takes an attack personally. If Carcassonne was not one of these games for you before, it probably is now. Some of these sets of rules are potent enough to end friendships and cause permanent rifts between spouses and significant others. So with that in mind I want to dive into each of the new rulesets to help you separate out the benign from the potentially malignant (but still fun with the right people).

I picked up this super expansion pack combo when it went on sale and have played a number of games including a crazy “anything goes" mish mash of every expansion. If you are looking for a complete flurry of randomness, tossing all the expansions together isn’t that bad of an idea. I, however, much prefer utilizing one or two expansions at a time to keep some semblance of strategy intact. So lets get into the sets and what each one offers. 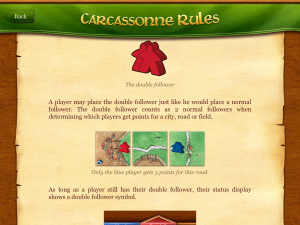 This is the all or nothing version of Carcassonne. Any city with a Catheral tile in it is worth 50% more than usual, but it isn’t worth anything if you cannot complete it. A road with an Inn on it’s tile works similarly except the roads count for double points if completed and 0 if unfinished. This pack encourages blocking people aggressively and large scoring spikes which intensifies the random nature of the game. One way it reigns in the RNG is the ‘Double Follower’ game piece. This piece counts as two pieces when figuring out ownership during scoring. More control in your hand and less in the deck is always a bonus for me.

When you know everyone playing to going to be aggressive anyway, or if you want to give people more reason to be aggressive. Outside of the Double Follower there isn’t much strategy, just randomly stronger versions of cards that already exist.

The river introduces… a river… to the board. This is basically a road that cannot be scored or played upon. With several new tiles, this thing functions as a field breaker primarily so farming may not be as profitable. The River also combines with the expansion ‘Traders and Builders’ to create more effects seen in that expansion, but they do nothing otherwise so I will cover that later.

Pretty much whenever unless you are playing with a friend who specifically loves fighting over a single huge farm area. This one is very safe and you won’t end up ripping people’s hair out more than normal with this expansion. The most impact this one has is that farmers will generally be worth a little less. 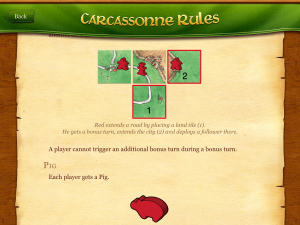 This expansion gives you 2 new tokens you can place. You can play ‘The Pig’ on a farm you already have played on to get a +1 bonus per completed city. You can play ‘The Builder’ on an uncompleted city or road that you have played on previously. The Builder allows ANYONE a bonus turn if they add onto the road or city the builder is on. When combined with the River expansion, pig farms will show up on tiles to provide a passive effect that mimicks the Pig. This effect can stack with an actual Pig token.

This expansion also has city cards that have 1 of 3 ‘Trade Goods’ on them. Whenever a city is completed, the person who placed the last piece gets whatever Trade Goods are shown in that city. So if a city has 3 barrel icons and a ribbon icon, the person who completed the city gets 3 barrels and 1 ribbon. The person at the end of the game with the most of each good gets 10 bonus points. This is a great alternate way to amass points and opens up non-game piece opportunities for point scoring.

I love this one, personal favorite. Farming is encouraged and completing roads and cities is encouraged. This gives someone a reason to do something besides messing with people and it is pretty difficult to use the extra rules to antagonize someone beyond what the base rules already provide for. Adds tactical depth and doesn’t give you more ways to be mean and nasty? Sign me up. This one is probably not super great for kids or people just learning the game, but its the perfect expansion to drop on someone who is just starting to get bored with the game. 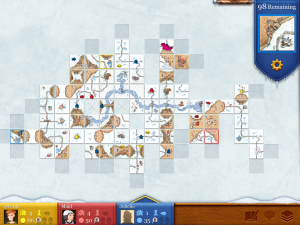 Most of this expansion is just a color swap. The only addition to the rules is that the gingerbread man token can be played and gives a point to anyone that is in a city it is leaving. It’s a nice decorative change with more flavor than substance.

Mostly play this just when the normal tiles start to look bland to you. The gingerbread man really doesn’t have enough of an impact on gameplay to make a decision based on that. The game plays almost exactly the same. Play whenever you want to enjoy a winter holiday adventure.

Evil incarnate, the ruiner, the destroyer, and the death of many friendships. This is the largest and most devastating expansion. There are a number of new cards that come with this pack including a portal that allows you to place your game piece on ANY unscored/unplayed space on the map. But the real game changers are indeed the Princess and the Dragon.

The Dragon shows up with certain cards, and then you enter the Dragon phase. He lands and each player takes turns moving him one space at a time until he moves 6 spaces or gets cornered. He cannot backtrack to any space he has been during a Dragon phase. Everywhere he goes, any piece on the board gets returned to the owning player. He is a horrible horrible jerk. Especially in 4-5 player games, you have very little control over him and if you lose a piece to him, you might end up hating everyone else in the game. 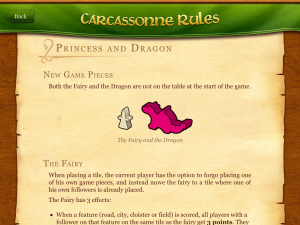 The Princess is, if you can imagine it, even worse than the Dragon. The Princess shows up on some city board pieces and if you play it on an existing city, you can actually remove another player’s piece from that city. She is a horrible horrible jerk, but the focal point of jerkdom is focused squarely on the person who plays her. At least with the Dragon everyone else can share the load of being mean.

There is also a ‘Fairy Token’ in this expansion. You can move it pretty much anywhere on the board during your turn if you do not play one of your own game pieces. The fairy can block the dragon from stepping on the panel it is on, it gives 3 bonus points if a city or road it is in gets completed. It will also give you a bonus point if you start your turn with one of your game pieces on the same square as the fairy.

This expansion really doesn’t offer much additional strategy, just a very powerful card in the princess and a random ball of destruction in the Dragon. I guess play it if you need a reason to get into a fight. Need to break up with someone? Get the ball rolling with Princess and Dragon. DO NOT PLAY THIS WITH SENSITIVE PEOPLE!

You get a single additional token that can be played in addition to the normal game piece played during your turn. Want to claim that road and field in the same turn? Phantom can do that. Same rules apply as a normal piece, must be placed on the card you are dropping.

This is a very simple expansion, but it helps to give the player more control. You get another tool to maximize point gains and minimize randomness. Play it with anyone who already knows the game. 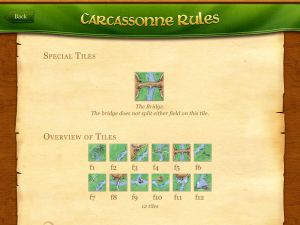 There is also an expansion that just doubles the card count for longer games. Not much to say about it other than it might not be great for anyone with a short attention span.

What I love about this game and especially about these expansions is that each one offers a unique flavor and you get the opportunity to tailor the gaming experience. Gameplay is vastly different and in some cases you end up making unique decisions that pay off but only because of the specific rules that have been added. If this was a review I would probably give Traders and Builders top ranks because of my love of strategy over randomness, but the whole library earns a 5/5 for sheer variety. The great part about the sale is you can take this as a suite of expansions that work in a number of different gaming environments and thats why I cannot reccommend them more highly, just be sure to use responsibly!