During GDC this year we saw a ton of awesome games, but after the event was over there was one game in particular that I couldn’t stop thinking about: Mediocre’s Does Not Commute (Free). It was the one time during the conference that I tossed my critical analysis hat aside and simply enjoyed something as a gamer. I wasn’t critiquing the visuals (though it looked incredible), or the controls (which were simple and worked flawlessly), or the concept (which was ingenious), I was simply kicking back and having fun. With Does Not Commute finally officially out in the wild, I’m finding it even better than I remember. 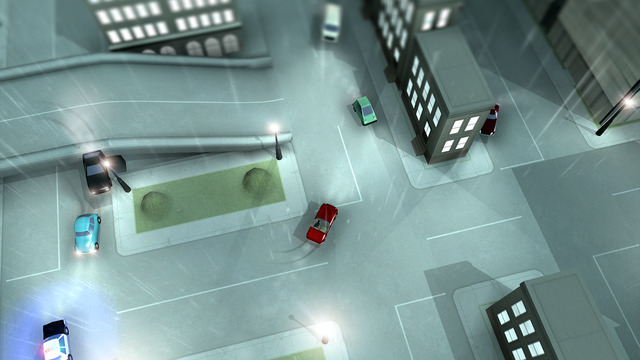 The concept is difficult to explain. Your job is to route a vehicle across a tiny section of a city, generally from one side of the screen to another. Once accomplished, you’re given a different vehicle with a different destination to route out. HOWEVER, the previous vehicle’s route and all previous routes going forward will replay on the map at the same time you’re trying to direct the newest vehicle. Basically, all your previous runs play out like zombies and threaten to clog things up and cause a wreck. Needless to say, things get hectic pretty fast.

Does Not Commute is difficult, but it’s a fun kind of challenge and one you can actually see yourself improving at. You start trying to “think in the future" when mapping out your routes, as most of the time the most obvious and easy choices are the ones that will come back to bite you later in the game. It’s just a very neat idea for a game, like the crazy uncle of Flight Control. Besides being fun to play, the game is also quite humorous with its little backstory blurbs about each and every character that drives the vehicles in the game. The visuals are also surprisingly impressive, and the physics delightfully crazy.

It’s just hard to find much not to like about Does Not Commute. It’s stupid fun, but also a hearty challenge. It’ll make you laugh many times over, both for its humor and for its tense close calls and lots of hilarious wrecks. It’s easy enough for any walk of gamer to grab and be able to play, but it’s definitely not a casual game. Everybody should at least download Does Not Commute and give it a shot, leave your own impressions in our forums.