Recently, Microsoft and the folks at 343 Industries launched two Halo spinoffs on the App Store. Halo: Spartan Assault ($2.99) originally debuted back in 2013 on Windows devices and is finally on iOS devices. However, Halo: Spartan Strike ($2.99) is a brand new adventure that saw a simultaneous launch on all pertinent platforms. As a sequel to Halo: Spartan Assault, it would make sense that Strike seeks to improve upon its predecessor and it succeeds in that regard. While the changes to the formula feel more evolutionary than revolutionary, those improvements are on a game that was already great  to begin with making Strike an even better dual stick shooter. 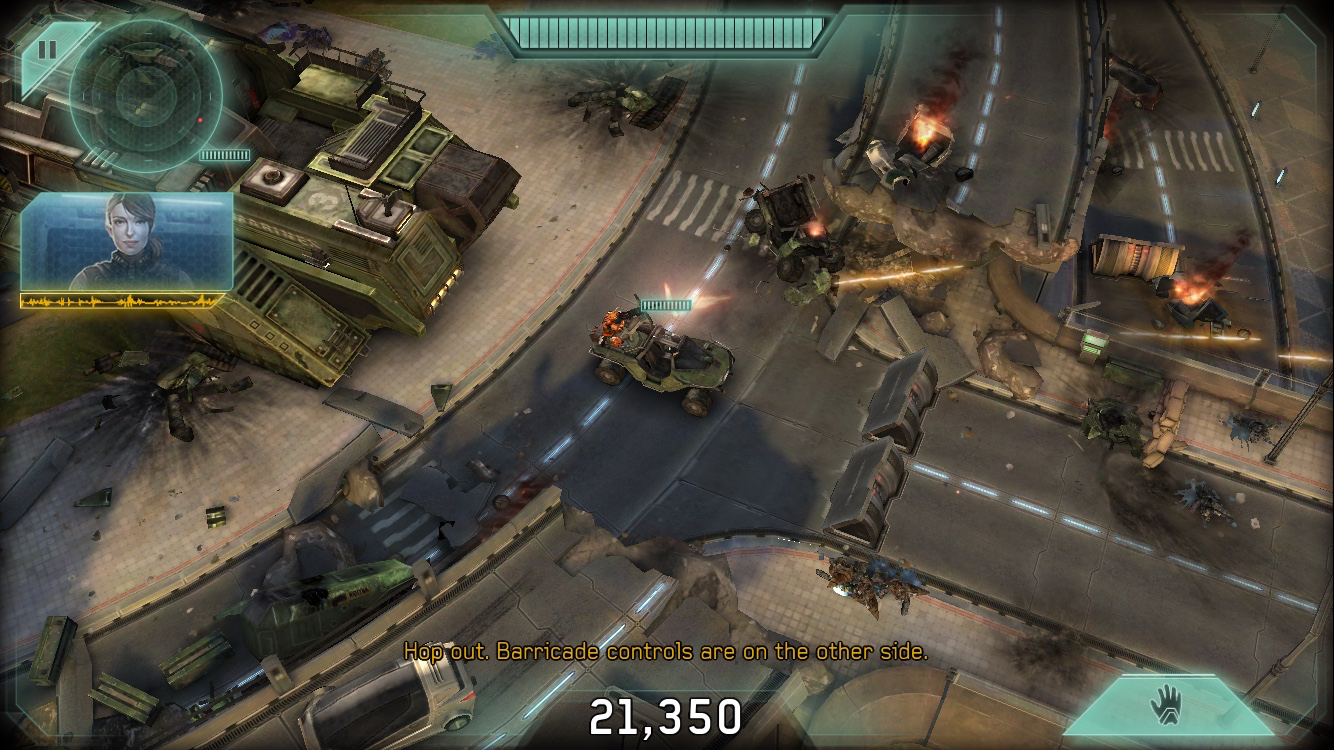 For a quick rundown in terms of the general control scheme in Halo: Spartan Strike, check out our Spartan Assault review as the controls are pretty much identical. The only changes worth mentioning have to do with the responsiveness of the controls. In Assault, I found vehicle controls to be a bit of a chore, as it was a little tough to simultaneously pilot and aim the weapons. However Spartan Strike seems to have made some minor adjustments that have lead to an improved experience in terms of vehicle controls. I’m glad they succeeded in this area, because Spartan Strike throws a lot more vehicle based combat at you at a faster and earlier pace than Assault did.

Speaking of general changes, Spartan Strike also makes some significant changes to the credit/weapon upgrade system. Both games have an arcade-ish system of weapon prep prior to the start of any mission. Players can expend credits to upgrade the default weapons and power-ups for any mission. Credits can also be spent on damage and score power-ups, which is important because players earn said credits by achieving high scores (complete with a three ‘star’ system) and hitting level-based objectives (such as killing  a certain number of enemies with a particular type of weapon). The big catch is that any weapon or upgrade purchased applies only for that next mission playthrough, meaning that players should probably think about how much they want to spend on what mission. 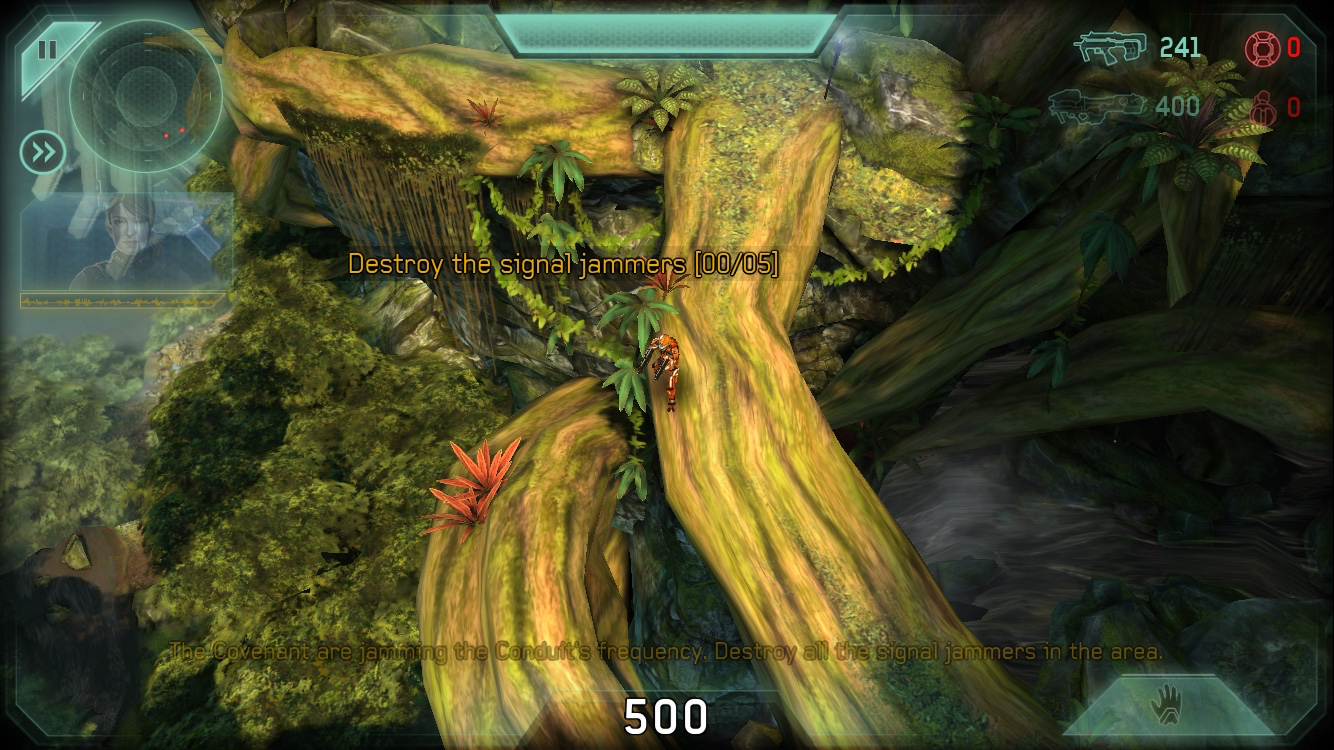 Players can also apply difficulty ‘Skulls’ (a throwback to gameplay modifiers that can be found in other Halo games) to increase the percentage of credits earned at the expense of making the game more difficult. The Skull system is particularly important in these games because it’s really the only way one can tailor difficulty, as there are no general difficulty levels to choose from. I also think it works well in the Halo: Spartan games in general because the missions aren’t particularly lengthy, so it’s cool to customize difficulty and if it’s too onerous, it’s not a big deal to restart and try a different combination.

Getting back to the Spartan Strike improvements, the amount of credits earned in each mission, as well as the cost for weapons, has seen a significant reduction when compared to its predecessor. In addition, the first six missions are relatively easy to earn lots of credits on without upgrading your hero which means by the time the difficulty gets tough, you should have a decent batch of currency available to customize your weapons and power-ups. There are also some pretty cool weapons you can upgrade to, such as the Spartan Laser and Rocket Launcher. 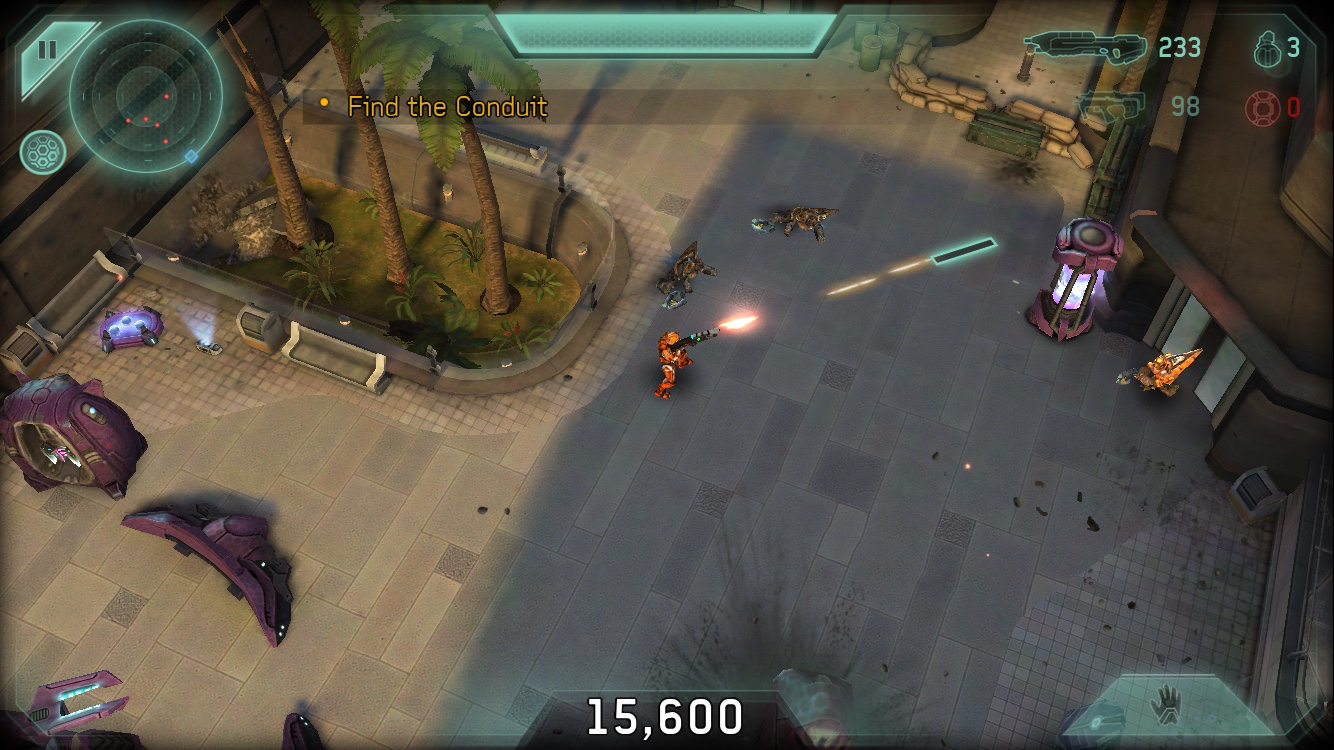 The biggest improvement I think Spartan Strike brings to the table is its greater emphasis on narrative-based gameplay throughout the missions. Spartan Assault had a habit of giving the player a general objective for a single mission and then letting them go at it. Spartan Strike feels like it has a more ‘dynamic’ flow in terms of the multitude of objective that can be found in any one mission. You might start out searching for a convoy, which then translates to an escort quest for said convoy while occasionally being interrupted to go on a fetch or switch quest, all of it accompanied by narrative that at least gives you a purpose for what you’re doing. It sounds like a small upgrade, but I feel it’s important for overall immersion and it certainly made me more invested in each mission.

Another huge improvement is in terms of visuals. I stated that i thought Spartan Assault looked pretty good for a two year old game but Spartan Strike blows it out of the water. Explosions look great, you can see enemies and allies fighting each other on different tiers in the backdrop, and everything just looks clear and crisp. It all runs without nary a hitch on my iPhone 6 as well. Credit also goes to the great soundtrack, which captures the auditory feel of a Halo games very well. I was also more engaged with Spartan Strike’s overall story, which starts out taking place (via holo-training) on New Mombasa within the events of Halo 2 but then branches off from there into different areas of the series.

It’s no question that if I had to choose between Halo: Spartan Assault or Halo: Spartan Strike that I’d pick the latter. It’s brand new, has a host of iterative improvements to the gameplay formula and looks and sounds excellent. However, both have a enough story immersion that I’d recommend picking up both for completion’s sake (thankfully a bundle is available for both at a discount). Regardless, these are both two great dual stick shooters that are a welcome addition to the App Store and are well worth a purchase.