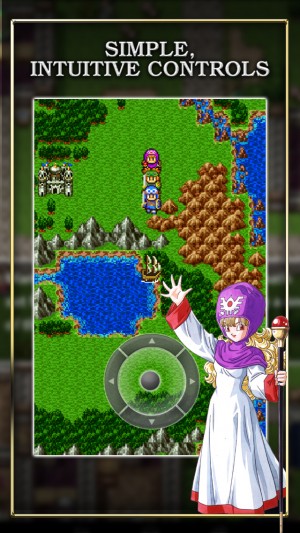 Like the eternal battle between nachos and quesadillas, the Final Fantasy series and the Dragon Quest series constantly struggle for the hearts and minds of RPG fans. My answer to that is the same as my answer to the former dilemma: why not both? Square Enix is making it really easy for you to fill out your Dragon Quest collection on iOS by putting a few of their recent releases on sale. Square Enix sales don’t come terribly often, and the Dragon Quest games are only sometimes a part of them, so you might want to stockpile these for a rainy day even if you’re working on other things. So far, the sale consists of three of the six games available on iOS. We’ll let you know if any of the others join.

DRAGON QUEST II, $4.99 For the frugal adventurer, or those looking for a slightly shorter quest, there’s Dragon Quest 2. Its regular price is $4.99, so in pure dollars this is the smallest amount of savings you could make on this sale, but it’s nevertheless a worthy pick-up. Potential players should be warned that the game is from an era where a lot of modern pleasantries hadn’t been invented yet, so your greatest weapon will be patience. That, and the Thunder Sword. Check out our review of the game if you want more details.

DRAGON QUEST III, $9.99 Those who enjoying building and customizing a party will find Dragon Quest 3 to be the best pick of this lot. This is the installment where the series really came into its own, and in some respects I think it’s one of the best. You play as the child of the missing knight Ortega, setting out on a quest to find him and defeat an evil lord with a party of your choosing. The adventure will take you to some suspiciously familiar places, and while the story is a bit light in places, the overall plot packs a lot of punch. This one usually sells for $9.99, so you can use the savings to buy one of the first two games! If you’re interested in reading (a lot) more about Dragon Quest 3, feel free to check out our review.

DRAGON QUEST IV, $14.99 All of these adventures are well and good, but what if you want something with a bit more of a story to it? Well, my narrative-focused friend, Dragon Quest 4 is the one for you. In an unusual chapter-based structure, you jump around from character to character, learning all about them before bringing the whole band together for an epic final chapter. It’s not for nothing that I named this one of my top ten games of 2014. It’s simply an incredible RPG, and if you want to read me gushing about it, you can peruse our review of the game. This one usually goes for $14.99, so the sale price leaves you with an extra fiver in your pocket. You can use that for another game, or perhaps nachos and/or quesadillas?

All in all, it’s a great sale on some truly classic RPGs. I’m not sure what the occasion is or how long they’re going to be on for these prices, so if you’re thinking about picking them up, you’ll probably want to jump on these sooner rather than later. There’s no telling when they might be on sale again, but knowing Square Enix, it could be several months or more.