One genre that I can’t get enough of is shoot ’em ups. I think I’ll be taking them to my deathbed. The high-octane action, the emphasis on pinpoint precision, and the constant positive reinforcement of blowing up enemies and getting massively entertaining power-ups is just too great of a force. .Decluster (Free) is my latest obsession, and it ticks all the right boxes.

As  a vertical shooter, your ship will automatically scroll upwards as it contends with enemies of a variety of different shapes and sizes. Basic shots are automatic, and pressing down on the screen with another finger will automatically enact a homing shot (that recharges over time), which actually functions more like a massive bomb blast you may be used to in other titles in the genre. The blast actually cancels out enemy shots as well, and it’s your job to try and use it when most of the screen real estate is filled up with them to earn the most points. 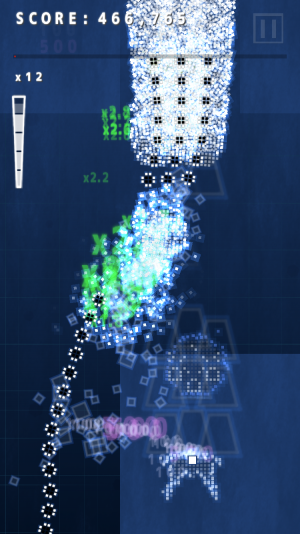 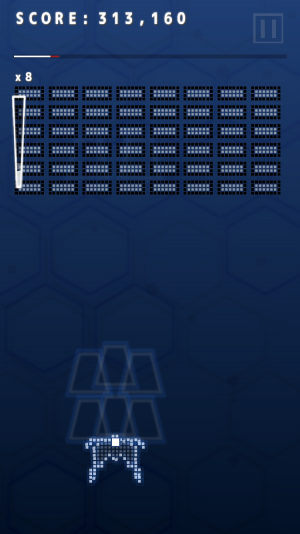 Enemy movements are unconventional and refreshing, and out of nowhere they can start filling up the screen with a hellish amount of bullets — and I don’t use that phrase lightly. To my surprise there are also a bunch of unique bosses to fight, like one that hides behind a giant series of walls similar to Arkanoid or Space Invaders. Lengthy, intense boss fights with multiple phases are also a go, and are just as thrilling as many classics in the genre. If there’s one thing Decluster manages to do best, it’s link the old and the new almost effortlessly.

As you progress you’ll start to use your homing attack more actively, effectively diving head-on into the amount of strategic depth this game really offers. I didn’t expect it at first, but there really is a lot of meat here, and even after playing for hours I discovered new ways to approach different situations. Decluster really is masterfully crafted, especially when it comes to the curtain patterns of the bullets — you can really tell the development team took some time to get them right. It helps that the controls are extremely responsive, and that you can adjust them to your personal preference in the options menu.

Decluster has an art style similar to Toast Time ($2.99), which I think fits perfectly in the mobile space. It manages to give off its own identity without looking too much like other shooters on the market, even if it operates similar to a Touhou Project title or a Cave shooter. The pixelated animations are sleek, and the soundtrack gets me sufficiently pumped to blow up some bad guys.

If you’re new to the genre you can select the beginner difficulty setting, and if you have more experience, medium or expert might be for you. Having testing all three I’m happy to say that they’re all pretty accurate, and even medium presents a fairly hefty challenge from the very start.

.Decluster – into the Bullet Hell is a modern masterpiece in the shooter arena. It pretty much has everything you could want — an easy to pick up control scheme, addictive sensibility, and a stark level of challenge for those of you who want to work to perfect every stage and boss encounter. It’s one that I’ll be playing for weeks to come.