I’ve reviewed more than 20 RPGs from Kemco since I started at TouchArcade in mid-2013, so I like to think I’ve got a pretty good handle on what to expect from each game at this point. Oh, the quality varies somewhat unpredictably, but the basic outlines each developer for the publisher employs are well-established by now and all too familiar. Every once in a while, however, one of those games dares to color outside the lines just a little bit, and when that happens, you can usually find Hit-Point’s name listed as the developer. Such is the case with Seven Sacred Beasts ($3.99), a strangely experimental title whose chief virtue is that it doesn’t just feel like a new story plugged into the same old gameplay. Instead it’s the opposite, which might seem like a good thing, but ends up causing some serious problems. 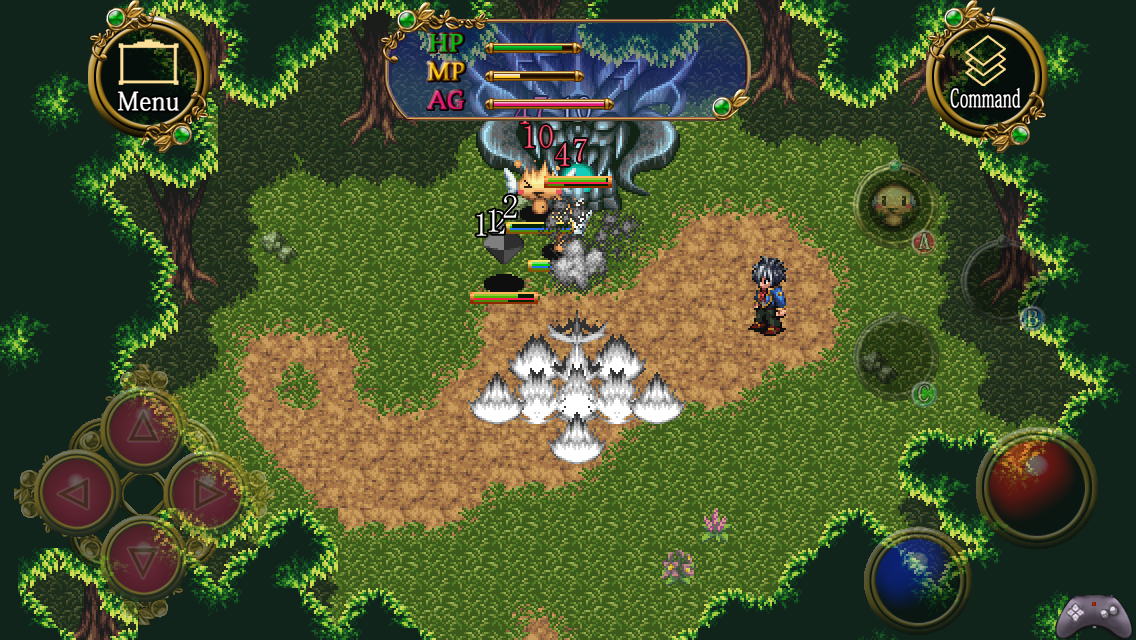 Our story follows an obnoxious idiot named Mattie who is obsessed with money to the point that he’ll do just about anything to get it. While he’s out on a job to recover an item from a cave one day, he meets a woman named Kaldia who makes him the offer of a lifetime. If he can win the Summoners Rex tournament being held by the wise Count Frung, she’ll pay him 100 million gold. Mattie jumps at the opportunity even though he and Kaldia almost instantly dislike each other, and the two set off for the group of islands where the contest is being staged. There’s obviously more going on than meets the eye, but it’s all straight from the JRPG textbook, as is generally the case with this developer. Suffice it to say, you will be finding out why Mattie is such a jerk and while I don’t want to spoil the ending, the world may be at stake here.

The islands in question serve as the setting for the game, but you can’t freely explore them. Instead, points will open up on the map as you progress the story. You simply choose the location you want to go to and confirm to travel there instantly. After you finish out the first few locations, you can choose the order you want to tackle the islands. It’s a bit like Mega Man in that they’re all themed, and while you can choose any order you like, there’s definitely a preferred way to go around in terms of strengths and weaknesses. You probably won’t want to visit the fire-themed island without some ice monsters in your group, for example. It’s certainly a novel approach, though trying to go against the intended path is nearly impossible, so it’s functionally pretty linear. You can’t open the area to catch monsters until you beat the tournament in that location, and beating the tournament without monsters of the right attributes is extremely hard. If you like your RPGs to have a lot of open-ended exploration, you probably won’t be happy, but I personally felt the streamlined approach worked well enough here. An overworld map is only good if the developer’s willing to use it in interesting ways, and Hit-Point has never shown much strength in that regard. 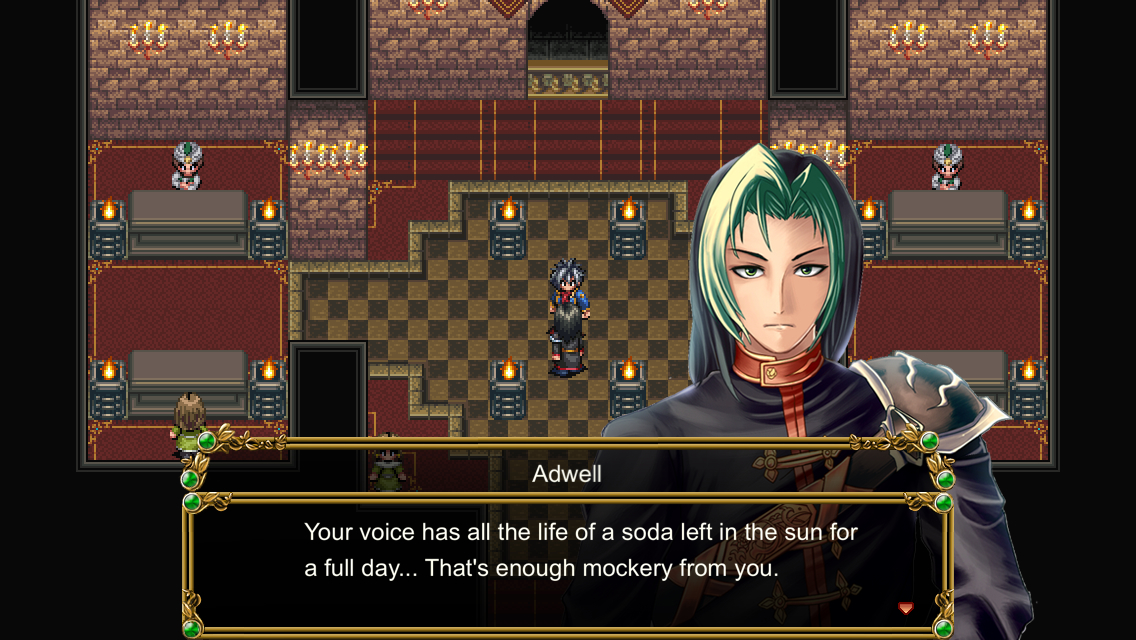 There is a bit of exploration to be had in the various dungeons you’ll be visiting, but nothing too difficult. The main challenge in the dungeons comes from the monsters that are scattered throughout. Mattie can’t directly fight on his own, but he can summon monsters who will battle on his behalf. This isn’t the first time Hit-Point has done a take on Pokemon, but this one turns out to be rather different from Band Of Monsters (Free). There aren’t any invisible random encounters or even discrete battle screens in Seven Sacred Beasts. You can see the monsters wandering around on the map. If you get near them, they’ll start attacking you in real-time, forcing you to summon some of your own monsters to defend yourself. At the start of the game, you can only equip a single monster at a time, but you can actually call out multiples of that monster if your MP holds out. As you progress in the game, you’ll eventually be able to bring along up to three different monsters at once, allowing for a little more strategy than the early game’s simple stick and move techniques.

Your monsters will generally act on their own, but you can assume direct control of one of them if you’d like. Be careful, though, because it leaves your main character vulnerable, and if he runs out of HP, you get kicked back to the inn. It’s usually a better idea to maintain control over Mattie so that you can use his special moves and capture monsters. Capturing monsters follows the Pokemon rule. The lower the monster’s health is, the better chance your capture attempt will succeed. You can make multiple attempts, however, so feel free to sidle up next to a fight and keep jamming the capture button. The only downside is that standing near the battle puts you at high risk of taking damage. The collision system isn’t the greatest here, as you might expect from action-RPG combat being shoehorned into an engine designed for turn-based games. Battles tend to come down to you summoning out your maximum load of monsters, keeping away from the fight until the very end, and then swooping in to make the catch. Against bosses, you basically have to run around throwing out monsters and trying not to get tagged yourself while you wait for your MP to refill. Things tend to run on a little long in general, making most tough battles more tedious than they should be. 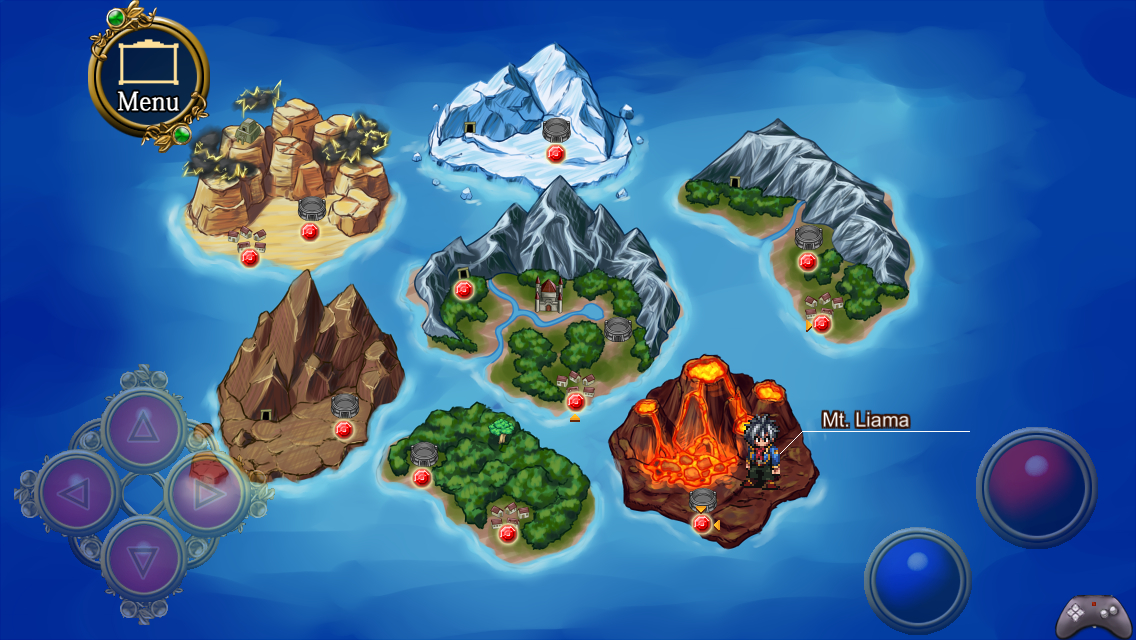 Like the overworld map, towns are just a map with a few points on them. You can pick up quests from people for extra cash, do some shopping, or head to the inn to change your monster party. There’s also usually a training center where you can evolve your monsters or teach them new skills if you have the right items. Evolving a monster requires gems that enemies drop, but the drop rate is kind of low. If you want to sequence break, you’ll need to evolve your monsters to get attribute advantages early on, but you’re going to have to grind for that. Actually, chances are good that you’ll have to grind anyway. Seven Sacred Beasts is lighter on content than even the usual Kemco release, so the developer appears to have padded it out by skewing the difficulty and having you return to locations repeatedly. Even with those unpleasant tricks, the game is still quite a bit shorter than the norm, hewing closer to the 10-hour mark than the usual 20 hours from this developer.

The poor balancing, extensive reuse of locations, and poor collision detection in battle all contribute to an overall feeling that this game was too rushed. Kemco releases games at a pretty fast pace, and Hit-Point is perhaps one of their busiest developers, so their games never feel like they’ve been properly fleshed out. It’s a bigger problem here simply because of how different they tried to make this game. It’s like the developer was working so hard to get one new plate spinning that the rest of them went crashing to floor, with the new plate wobbling precariously itself. I absolutely love that they’re trying new things, because they frankly need to, and there’s certainly some merit in the ideas that Seven Sacred Beasts brings to the table, but it just doesn’t work well. I suspect most people will have a similar experience to mine when they play the game. There’s that initial period where you’re just trying to get through the story exposition to reach the game, followed by excitement from the new and novel elements, only to have the game’s serious problems start to seep through and ruin the whole thing. Then, several hours later and with you completely none the wiser, it ends. 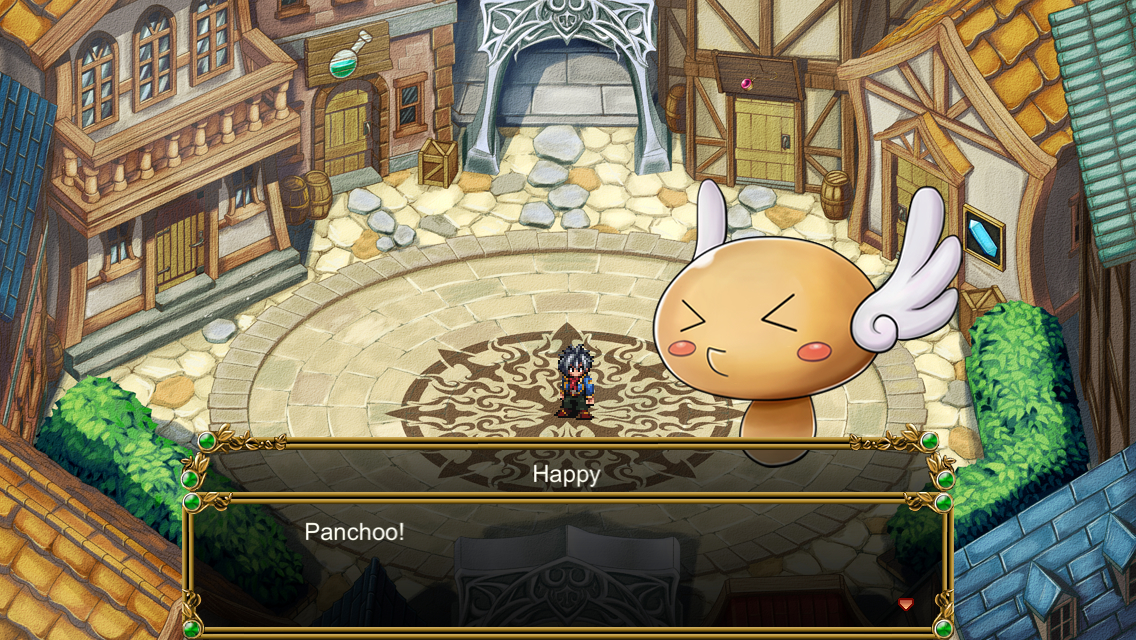 If you can get into the extensive grinding that the game requires to fully enjoy it, you might enjoy this odd lump of a game. It’s definitely enjoyable in its early stages, and if you can stick it out to the point that you have a nice array of monsters of different attributes, it does eventually become a little fun again. The localization is a little better than we usually see in Hit-Point’s games, so the story is interesting enough to read, if not particularly unusual in its progression. This developer has a habit of coming up with interesting ideas only to ditch them for the next game, but I really hope they don’t do that with Seven Sacred Beasts. The basic gameplay is fast, enjoyable, and nicely side-steps some of the problems with trying to do an action-RPG on touch devices. It’s just in need of some balancing and a bit more care given to the other elements built around it. That said, while I appreciate the ideas Seven Sacred Beasts brings, I’m pretty indifferent to the game built around them.