I love the idea of Adventure Time Game Wizard ($4.99) because of the power of its license. Pixel Press Floors (Free) was cool technology, in the way that it let people sketch out levels on paper using a system of glyphs, and then take a photograph to scan them into the game. It’s a remarkably cool tech and idea. But really, the greatness of the idea and its reach was somewhat limited by the new intellectual property and the limitations that Pixel Press had in terms of PR and reach on the App Store. Thus enter Cartoon Network. The kids love them some Adventure Time. So, why not combine that license and the Cartoon Network marketing muscle with the latest Pixel Press tech? What is here is not just a competent platformer, but an incredibly powerful creation tool that I think could be really great because of the way that it opens up creation to a young audience in an accessible way. 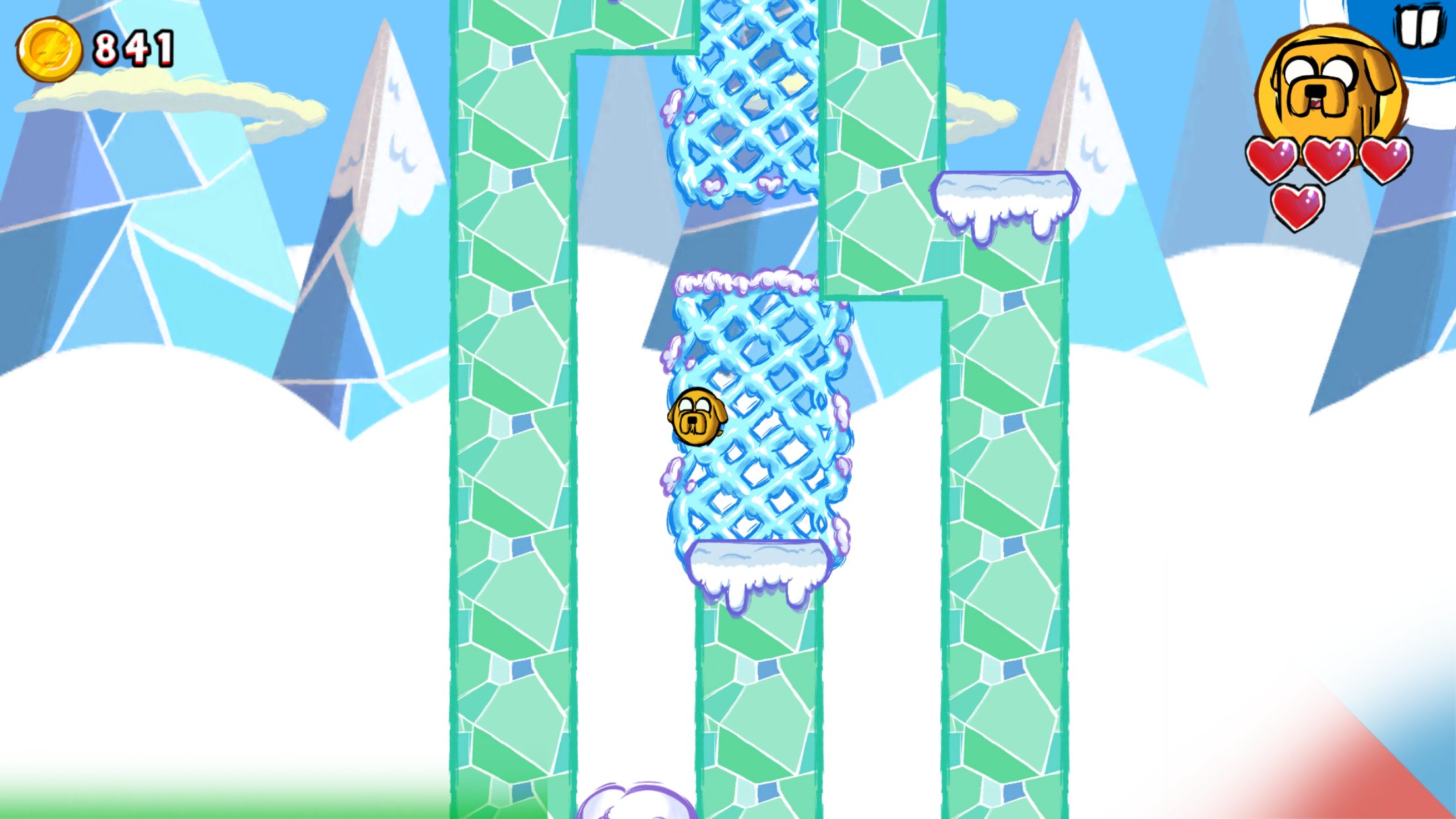 The platforming game at the heard of Adventure Time Game Wizard has you controlling Finn, Jake, Ice King, BMO, or Fire Princess and swapping between them, as each character has certain abilities which can be taken advantage of to explore the different levels. Marceline sadly isn’t here yet, and Princess Bubblegum is just an NPC, but we’ll forgive that, particularly as the game teases Marceline as a character down the road. The singleplayer campaign is a pretty cool Metroidvania-style adventure worth checking out, in part because it introduces you to everything that this game can do, while also featuring voices from the show, and Weird Al as the eponymous and villainous Game Wizard. You can upgrade characters and unlock new ones as you collect coins, and can also start to unlock new elements to play with in the creation mode.

While there are some aspects like the story elements that you can’t replicate for yourself, the game is otherwise something that you yourself could make, which speaks to the power of the technology at play here. Grumpyface, Cartoon Network and Adult Swim’s go-to studio for games nowadays, did a good job at making a game that feels comfortable with touch controls. Also, the characters have a different look from the show and other games, with thicker lines and perhaps a more manga-inspired style to them. I like the way things are being mixed up. 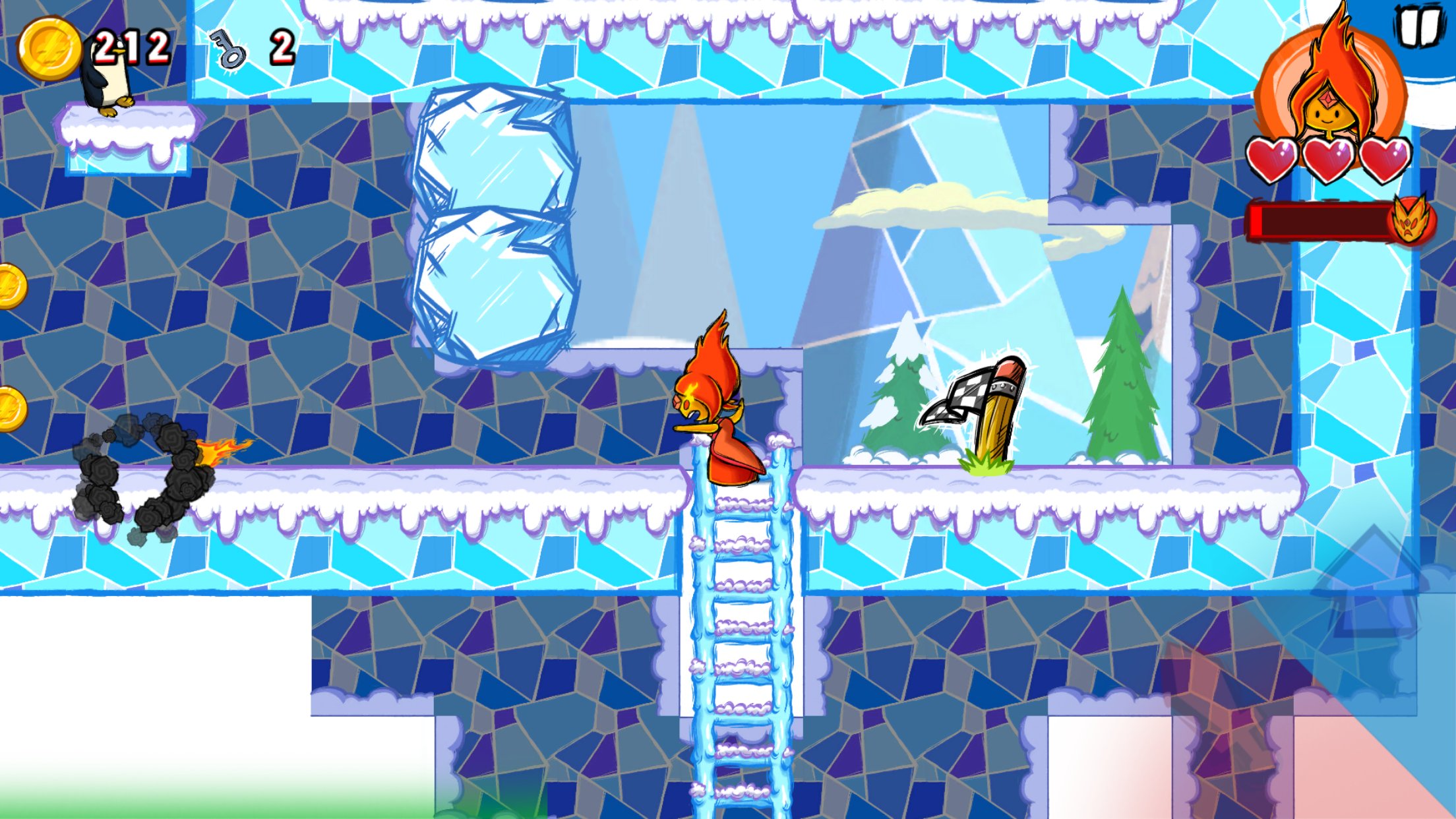 The game lacks in-app purchases for currency, which is a good thing, since it’s possible to play levels where large amounts of gold can be earned just for completing them, so IAP would be unnecessary. There is one currently-free IAP for new design elements, which feels fair enough. Everything else can be earned just by playing.

But the singleplayer mode? That’s just the appetizer for the real heart of Adventure Time Game Wizard. The level creation tool here is the bulk of the game, but it’s really more of a full platform-game-creation tool. You can make your own experience with checkpoints, many enemies, powerups, coins, different art designs and more, all with different level sheets that you can combine together. You can do so either through the in-game editor, or by printing out and scanning paper drawn with the glyphs that correspond to in-game objects and scenery. You can really make some surprisingly-expansive levels here if you’re willing to dig in and try things out. You kind of need to learn how the game physics work as you playtest your games to know how platforms, springs, and different elements will all come together. With time, experience, and loads of playtesting, it all starts to make sense. 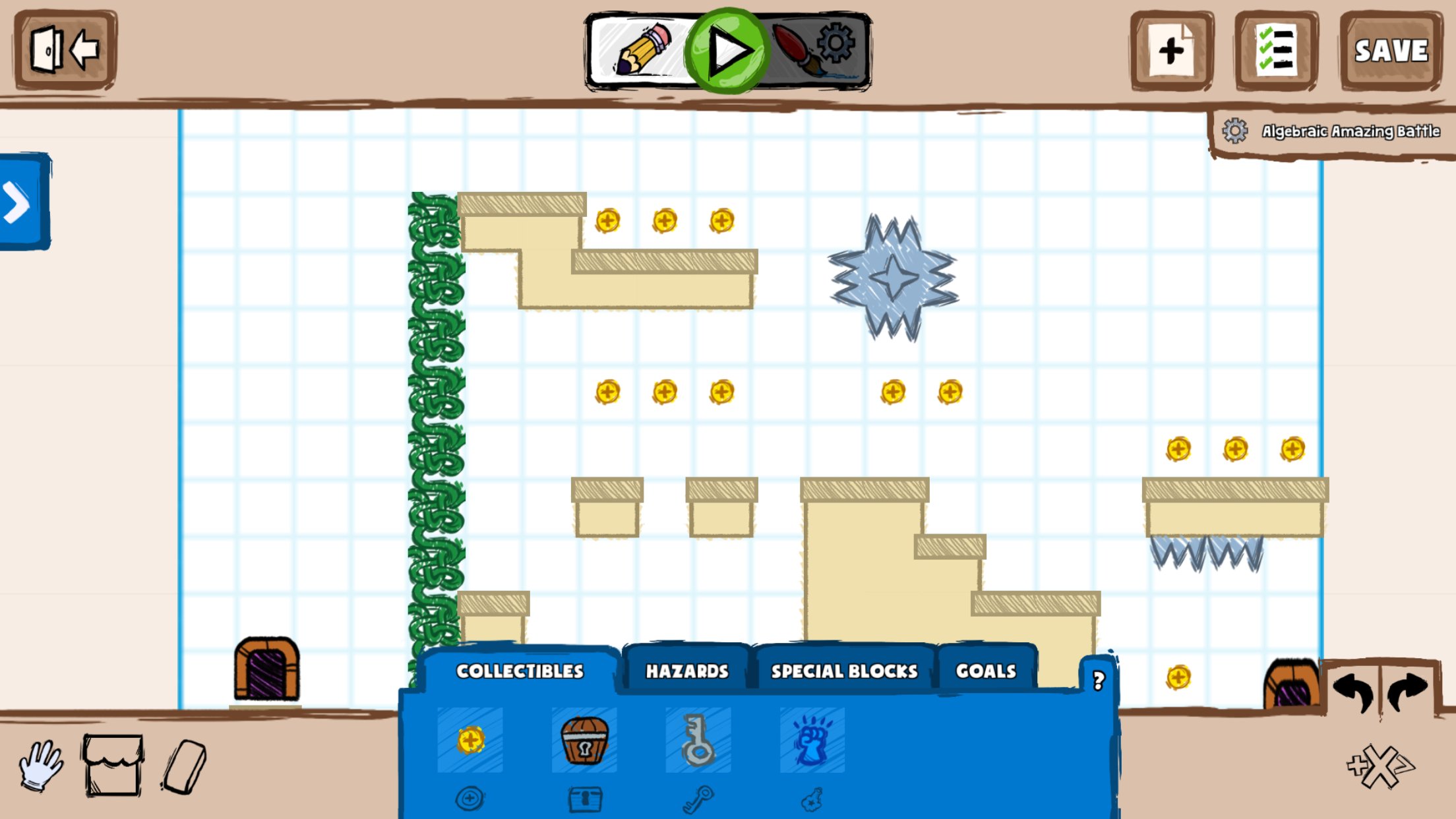 I suggest really playing through the arcade of other people’s games for two reasons: one, to see just what is possible. You want to create the Donkey Kong Country barrel-focused game that you always believed should be possible? Do it! You may not realize just how powerful this engine can be until you sit down and really see what others have done. Two, because the most popular games tend to have huge coin rewards, and then you can use those to unlock all the really cool things to use in the levels.

Part of Pixel Press Floors‘ hook was that you could draw on paper to create levels, but just from a functional basis, I’d rather create int he app itself. Perhaps it’d be a cool sketching exercise and practice for those who want to visualize their levels before importing them, but from a functional basis, creating in-app is better. While you can make levels on the iPhone, the expanded screen space of the iPad just feels better for making levels. Still, you have the option to do so wherever. As well, with the arcade functionality to share games, it’s fun to go and play other levels and put yours out there. Also, because this is a kid-friendly game, the username you choose is based off of a set of fixed words and names. Still, I was able to have “Wondrous Carter Hippo" which I applaud Grumpyface for ensuring made it in there. I gotta stay on #brand. 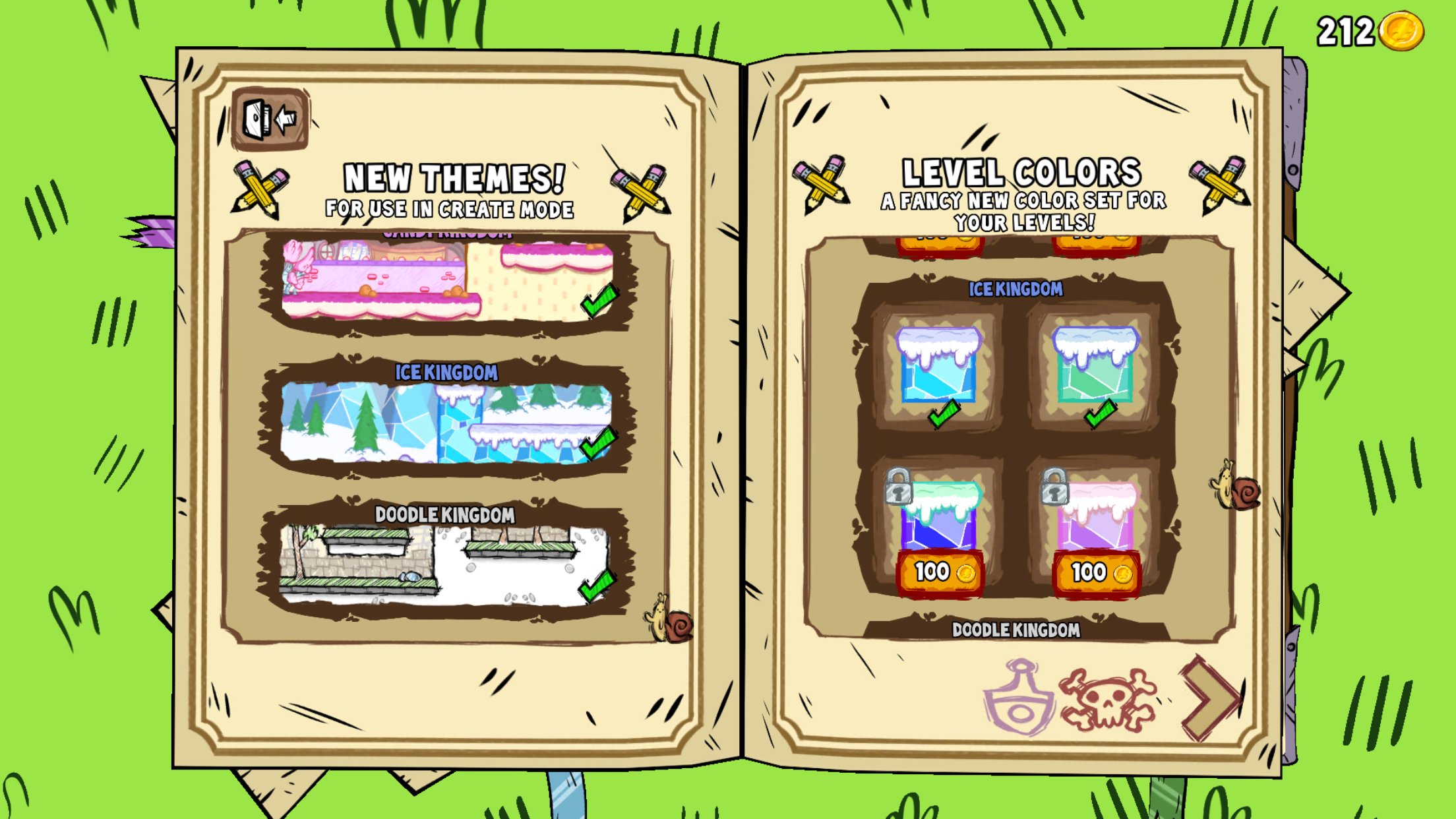 Of course, the downside to any sort of creation software is that the experiences are never going to be as polished as something made in static form. Grumpyface did a good job at making things feel cohesive when you lay down blocks and whatnot, but when people can build their own things within a set of rules, it’s impossible to make everything that gets created have the perfect game feel that the creator’s levels have. It’s a trade-off that any game about user-generated content will have: pesky people who want to bend the rules, and do things you could never have anticipated. And for players, they always know that something is off. Whether you’re willing to put up with an imperfect feel in exchange for hours of content is your own personal choice.

But this game really does a great job at making creation simple and accessible while still complex and expansive enough to allow for some really cool things to be created. I really hope a lot of kids particularly check out Adventure Time Game Wizard: maybe ten, fifteen, twenty years from now, the next great game is going to be made by someone who downloaded this and had this spark a dream of making games. This game really has that potential to do that, that’s how great the tools are here. And that really excites me that while, yeah, this is a capitalist endeavor and Cartoon Network ideally wants to make money off of this, the fact that gaming and the world could maybe be a better place because it uses familiar licensing to introduce people to creation in an accessible way is just fantastic.