I have a confession to make to all of you. About a month and a half ago, I started playing Final Fantasy: Record Keeper, and I’ve been hooked ever since. I’m in deep, playing every day to open up new chapters from the games and unlock new characters. For a Final Fantasy fan, it’s almost the best case you could imagine for a free-to-play social RPG. A lot of that is because it understands that you have to give people some of what they want or you’re going to lose them right away. It’s not as strategic as Terra Battle (Free), and it certainly has some pay boundaries when you get several hours in, but all-around, it’s one of the more generous and fun social RPGs I’ve played so far. It’s certainly not what I expected from DeNA, a company who has earned a bit of a reputation over the years.

Okay, I’m talking an awful lot about another game in this review of DeNA’s latest social RPG, Blood Brothers 2 (Free). As a result of my enjoyment of Record Keeper, I thought I’d give some of their other recent efforts a shot to see if I’d have as much fun. The first Blood Brothers (Free) game was a pretty big hit for the company, or at least I suppose it must have been, since it’s hung around in the App Store’s top grossing charts for quite some time. I was interested to see how they would follow it up, since one of the things I’ve noticed about the big F2P hits is the difficulty in replicating their success for a sequel. It’s a similar problem that successful MMOs have where the player gets extremely invested in their progress in the original and doesn’t want to start over. You could theoretically allow them to carry their progress over somehow, but that turns off the new players you’re presumably trying to attract by doing a sequel in the first place. Finally, even if you do get the core players to give up the original game, there’s no guarantee they’ll move to your new game instead of another one. 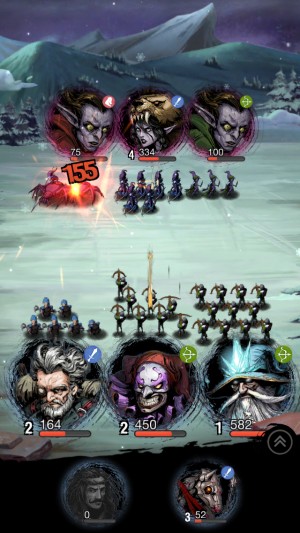 I’ve seen lots of different types of solutions for the problem, but I wouldn’t say any of them have been particularly successful. DeNA’s approach with Blood Brothers 2 is to basically use the name and the setting to push a ver different game. The first game was a minor twist on the sort of card games that glutted the free-to-play category a couple of years ago, like Rage Of Bahamut (Free) or Marvel War Of Heroes (Free). This is a completely different and, at least in my opinion, better game. Unfortunately, even though the sequel is no longer derivative of that style of game, it’s now simply aping what’s hot at the moment in social RPGs. The stamina system is more like Puzzle & Dragons (Free), simply taking a chunk for each stage you attempt rather than each move you make.

Battles actually require your input now, asking you to choose which units to deploy and if you want to make use of their special attacks that they can fire off every so often. The way the fights work is a little like rock-paper-scissors. Every commander is one of three types: archer, infantry, or cavalry. Each is strong versus one and weak against the other. Usually your enemy will field three commanders, and you can do the same provided you have enough left standing. The idea is to take advantage of enemy weaknesses to turn things in your favor. The enemy won’t always use one of each type, so you’ll need a good mix yourself.

The combat reminds me a lot of one of the StreetPass mini-games on Nintendo’s 3DS, only with all units fighting simultaneously. Before you start each map, you’ll get a preview of which enemies you’ll be facing so you can plan your group accordingly. It’s not terribly deep, but I suppose I’ve seen worse. The other thing you need to take into consideration is initiative. If a battle breaks out from you moving into the enemy’s space, you’ll get to attack first. This makes a big difference in battles, so you’ll want to make your moves on the map carefully. The maps are generally set up to work against you, so you have to be clever so that the enemies don’t get the drop on you. 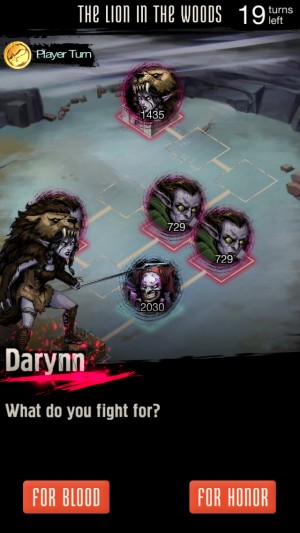 The art style has also completely changed, adopting more of a Western style. It doesn’t look all that good in my opinion, but it’s at least distinctive, which is more than I could say for the generic look of the first game. There’s an attempt at a narrative as you go along in the story mode, but it’s both very predictable and not terribly enjoyable to read. There’s a mechanic in the game where you have a chance to recruit enemy commanders which sometimes makes no sense at all given the dialogue you had with them up to that point. A little extra text in these situations might have helped smooth things out a bit. That’s the only place in the game where I’ll call for more expository dialogue, since there’s a bit too much of it as-is. In addition to recruiting commanders, you can also summon them through a portal. You can pull some fodder-level characters for free a few times a day, or you can spend some of your premium currency for a chance at something useful.

The two big question marks with any social RPG in the current climate are what separates it from the pack, and whether or not it has a fair model. Blood Brothers 2 at least carries a well-known name and a world that many people have enjoyed playing in, but apart from that, its hooks are few. Games in this genre tend to lean hard on how fun and interesting their battles are, and to be frank, rock-paper-scissors really doesn’t do much for me. As for its model, it feels a little too punishing compared to some of the better social RPGs out there. After finishing the first set of stages, the difficulty ramps up sharply, as does the stamina cost of each attempt. The step up in challenge easily outpaces the rate at which you can build your strength without spending money, and the stiff stamina costs make grinding even more painful than usual. I tend to have more patience for these kinds of games than most people, but even I hit a point where trying to progress seemed futile without dropping some cash on a few rare pulls or even just some extra turns. When this happens, you can still busy yourself with the arena and various events, but it feels like the stick comes while you’re still taking your first bite of the carrot. It’s hard not to be turned off.

In the end, I’m not sure who Blood Brothers 2 is really going to resonate with. The dramatic changes in art style and game mechanics are probably going to leave the many fans of the first game scratching their heads, but nothing the game does seems all that likely to pull in anyone else. Even those who give the game a fair chance to prove itself are going to find it a bit too stingy, too early. Free-to-play games have to make their money somewhere, of course. That said, it’s very important that the player has a chance to fall in love with the gameplay before it starts asking for money the hard way, and I just don’t feel that’s what happens in Blood Brothers 2.