We’re really going down the meta-rabbit hole here. The latest release in the long-running and prolific LEGO series of video games from TT Fusion and Warner Bros. is The LEGO Movie Video Game ($4.99). It’s a game based on a movie, based on a toy, whose sense of humor and visual style was heavily drawn from the games based on the toys made from licenses of other movies. This version specifically is a slightly modified port of the game as it appeared on the Nintendo 3DS and PlayStation Vita, so don’t expect any open world shenanigans or levels drawn from the console version of the game. It most closely resembles LEGO Marvel Super Heroes: Universe In Peril ($4.99), which I enjoyed more than the usual fare due to it being less of poor imitation of the console versions and more of a game built for handheld play.

You would think that would mean I’d be pretty happy with The LEGO Movie Video Game. I kind of am in a way, but in another way, an admittedly very silly way, it bothers me. Not really so much for the game itself, mind you. Like LEGO Marvel, the game is made up of a bunch of short, focused levels, each with a number of tasks to check off in addition to the main goal of beating the stage. There’s actually quite a bit of variety to the stages here compared to the last game, with lots of vehicles and a few levels where you need to guide Emmet safely through a long fall. To successfully check off a goal, you have to complete it and then finish the stage, which can actually be something of a challenge at times, a rare treat in the LEGO line-up. There’s even a nice reward for completing these goals, as many of them will unlock a character or power-up that you can purchase with the LEGO studs you’ve collected. You can even unlock stud multipliers this way, helping ease the spiked economy of this iOS version compared to its handheld cohorts. 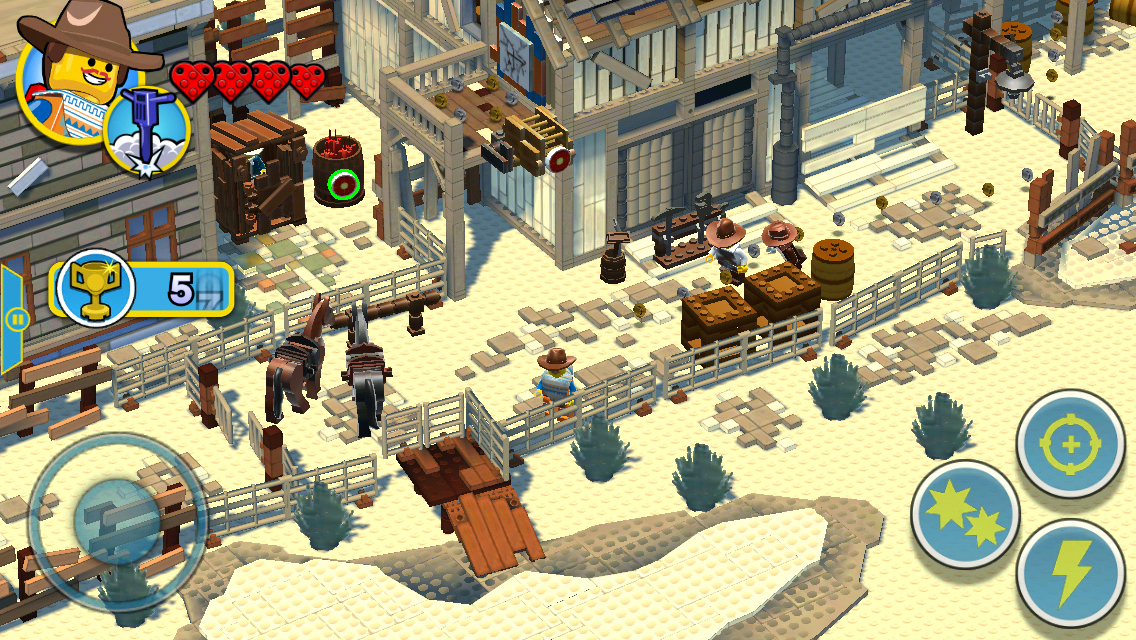 The presentation is also quite nice. The Nintendo DS has officially been left behind with this game, so TT Fusion can go a little more wild with the visuals and audio. The game is much prettier in its finer details as a result, and the stages also offer slightly more complex constructions than we saw in LEGO Marvel. As in the prior game, the camera is now fixed to an isometric viewpoint, which makes things a lot smaller but spares you most of the camera headaches of earlier games. Between stages, you’re frequently treated to clips from the movie, and they look and sound great while providing fairly smooth transitions from stage to stage. How about that great theme song, “Everything Is Awesome", eh? I hope you like it, you’ll be hearing it an awful lot, both in its original form and in arrangements. The game also features iCloud support, a couple of different control methods to choose from, and a lovely selection of IAPs if you’re impatient and want Batman now. Everything can be unlocked without paying if you’re patient enough to save up those studs, and you’ll probably be replaying levels more than a few times to check off the list of goals anyway.

Basically, it’s business as usual for the LEGO games. So why does this one rankle me? Well, before I explain, let me just say that I warned you that it’s a silly reason. If it’s something that doesn’t bother you, feel free to apply whatever score you think should be on a LEGO Movie-flavored LEGO Marvel: Universe In Peril. It’s no better or worse of an actual game than that one, so it’s really all a matter of what the license does for you. 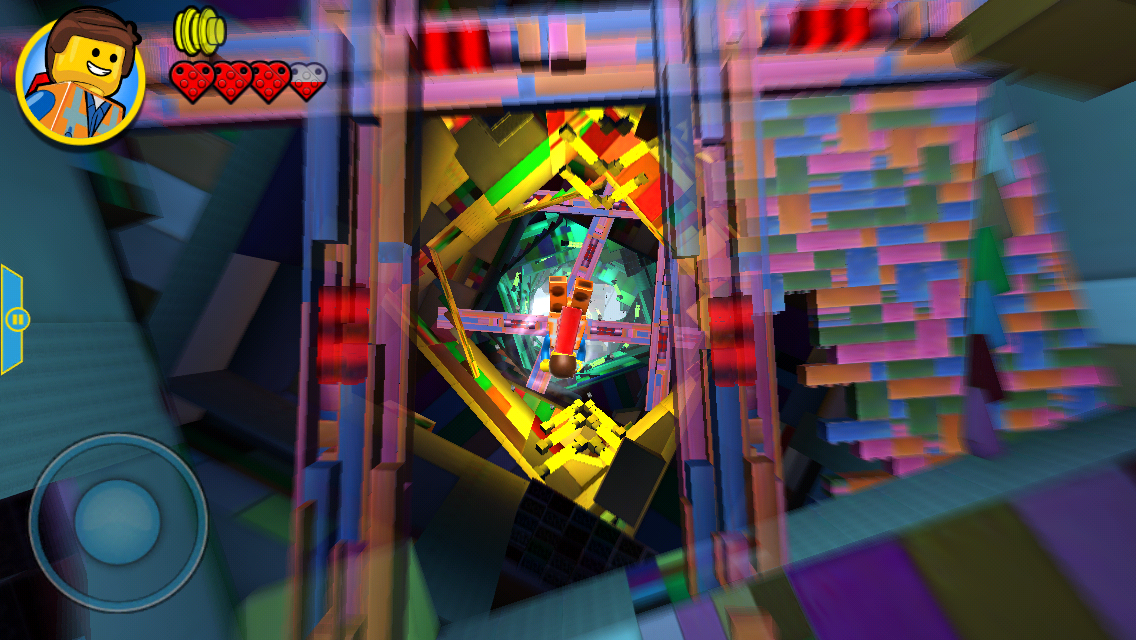 The LEGO Movie was an excellent, entertaining movie that had a very difficult task ahead of it. It had to somehow take a toy that amounts to a plastic sandbox and create a narrative that not only made sense, but also kept true to the creative spirit that put LEGO bricks in the hearts of so many of us and our children. I’m not sure if any of you had much confidence in that happening when the movie was announced, but I know I didn’t. At best, I was expecting something cheeky and funny like the LEGO video games have been. Well, that movie definitely put my fears to rest and then some. It’s a wonderful celebration of LEGO’s history and what the toy means to everyone. In the beginning, it seems like it’s pushing the line that instructions are conformist junk and pure creativity is the real way to play, but then suddenly balances it out by showing that while creativity is to be applauded, anarchy isn’t always the best way to get things done. Basically, however you play with your toys, there’s no wrong way to do it. It’s beautiful, in a way. In another way, it’s just a funny movie that kids and adults alike can enjoy. Who would have thought it?

That’s why this game bugs me. It’s following the instructions to a tee, just like Emmet did at the start of the movie. It questions nothing, marching in lockstep with the games that came before it. Most of the abilities of the large cast of characters are holdovers from games released 10 years ago. Almost all of the puzzles are the same. At some points, the game almost teases you by letting you drag one or two bricks over onto an object being built. Why can’t I just build it myself from scratch? Give me all the pieces and let me put it together. Dragging and dropping a single block is not only neither interesting nor fun, it’s a reminder that LEGO games have long since established themselves as rigid things that don’t allow you to be creative in the slightest. All of the building is pre-set, and you have no choice but to follow the instructions. You can destroy so much, and build so little. How is it that a movie, a linear and passive experience by the very nature of the media, is able to more accurately capture the essential creativity of LEGO than a video game? This criticism has always sat in my peripheral vision with every LEGO game I’ve played, but here, in a game using a license that is pure LEGO, it can’t help but come sharply into focus. 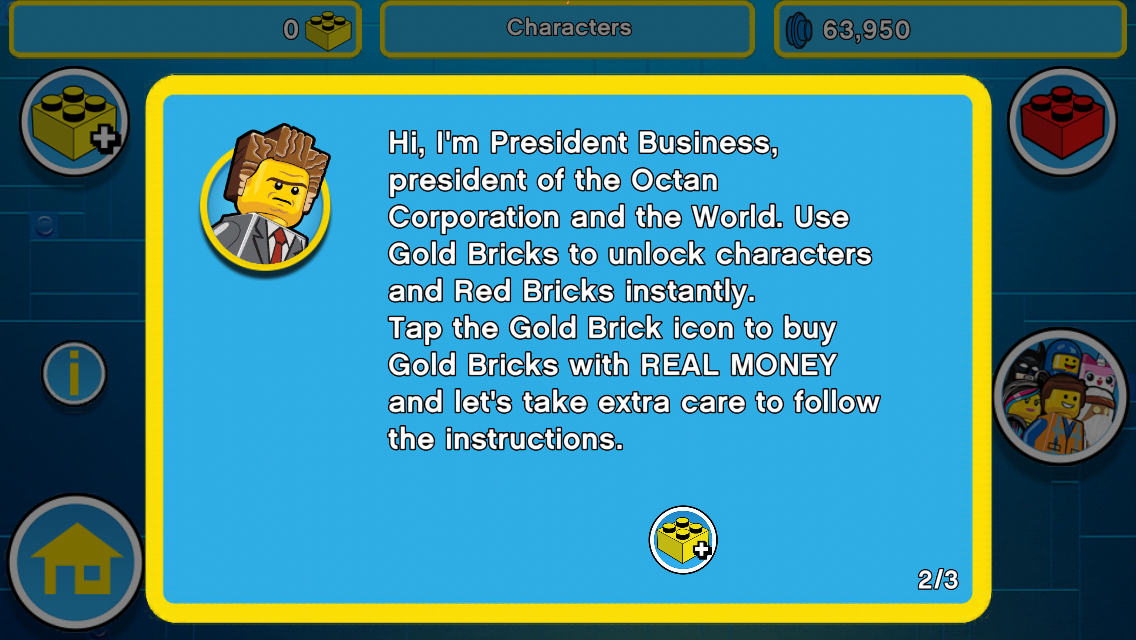 So no, everything is not awesome. Everything is the same as ever. Everything is boring and expected. TT could give me their lineup for the next five years and I could probably imagine their games down to the smallest detail just from knowing the titles. The gameplay is fun in a mindless way and the sense of humor is great as usual, but there’s something that just feels wrong about this brand doing nothing but spinning its wheels creatively. I hope someday that TT loses the instructions and builds their video game equivalent of a double-decker sofa, but today isn’t that day. Today, it’s just another LEGO game.