Ambition Of The Slimes (Free) appeared on the App Store worldwide a few months back, but until recently, the only language it offered was Japanese, making it tough to play for people using every App Store except Japan’s. An English patch was promised in the notes, but after a few updates came with no sign of a translation, I had assumed the developer meant it in a ‘someday’ kind of way. Apparently not, however, as the game’s most recent update finally opened up the game to English players. So, as I promised back in the first article I wrote about the game, I’m here to give the game a proper review.

Certain games achieve a level of success within their genre such that they become the template for games that follow. Those games that follow might come up with an interesting twist of their own that brings them success, and that twist is highly likely to end up as part of the template. In the strategy RPG sub-genre, at least as far as Japanese developers are concerned, the two big genre-definers are Nintendo’s Fire Emblem and Yasumi Matsuno’s Tactics series. Fire Emblem sort of tripped into creating a sub-genre when Intelligent Systems crossed RPG mechanics into their successful Famicom Wars. Many highly derivative games followed, the most famous of which in the West is probably SEGA’s Shining Force ($0.99). When Matsuno followed up on the rather unorthodox Ogre Battle with a more typical (read: Fire Emblem-like) type of strategy game, he skewed the viewing angle, mixed in heavy story elements, and created Tactics Ogre. That game was essentially reworked with Final Fantasy IP to create Final Fantasy Tactics ($13.99), which is probably to date the most famous and successful Japanese strategy RPG in the world. 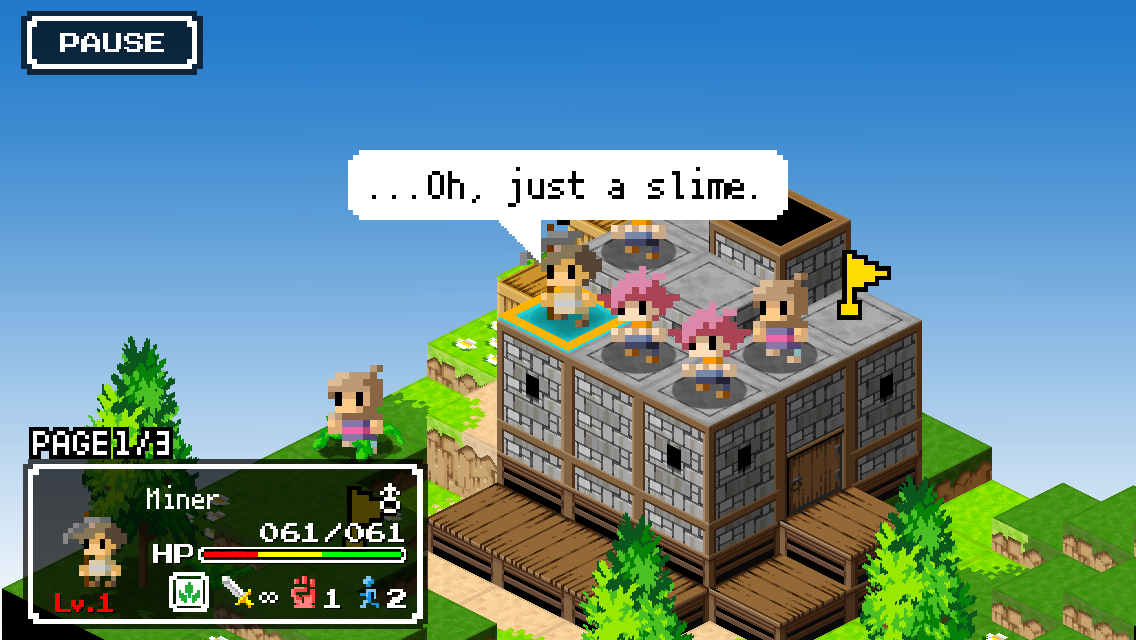 There are heavy traces of both games in Ambition Of The Slimes. Obviously, at a glance, it looks a lot like the Tactics games. It uses the same three-quarter overhead view and even allows you to fuss with the camera in similar ways. Its gameplay nuts and bolts are more closely patterned after Fire Emblem, however. For example, you move your entire team one after another, followed by the enemy moving their entire team, and so on. There’s also a version of Fire Emblem‘s weapon triangle, albeit a bit more simple. Each character has one of three elements, each of which is strong against one other element and weak against another. If you remember Battle Beasts, first of all, congratulations, we’re probably from the same generation. The elements in Ambition are exactly like those, with fire beating wood, wood beating water, and water beating fire. I’ve never understood that middle relationship, by the way. They always pitched it as wood floating on water, which doesn’t seem much like it’s beating it. Well, that’s neither here nor there.

The game ends up being very straightforward as a result, with type advantage tilting into the damage equation so heavily that you really can’t ignore it. The only other thing you need to keep sorted is your relative height compared to the enemy. The character with the high ground will do more damage. If you combine the two advantages, you’ll probably defeat the enemy in a couple of hits. Elements also figure into the game’s most unique gameplay addition. Technically, you’re playing as a group of slimes who have had enough of humanity’s destructive ways, but if you’ve played any of the Dragon Quest games, you know that slimes are almost pathetically weak. They certainly wouldn’t stand a chance against a well-armed team of adventurers. Even here, in a game where they’re the heroes, that remains true. Your enemies will make incredibly short work of any slimes they’re able to directly attack. 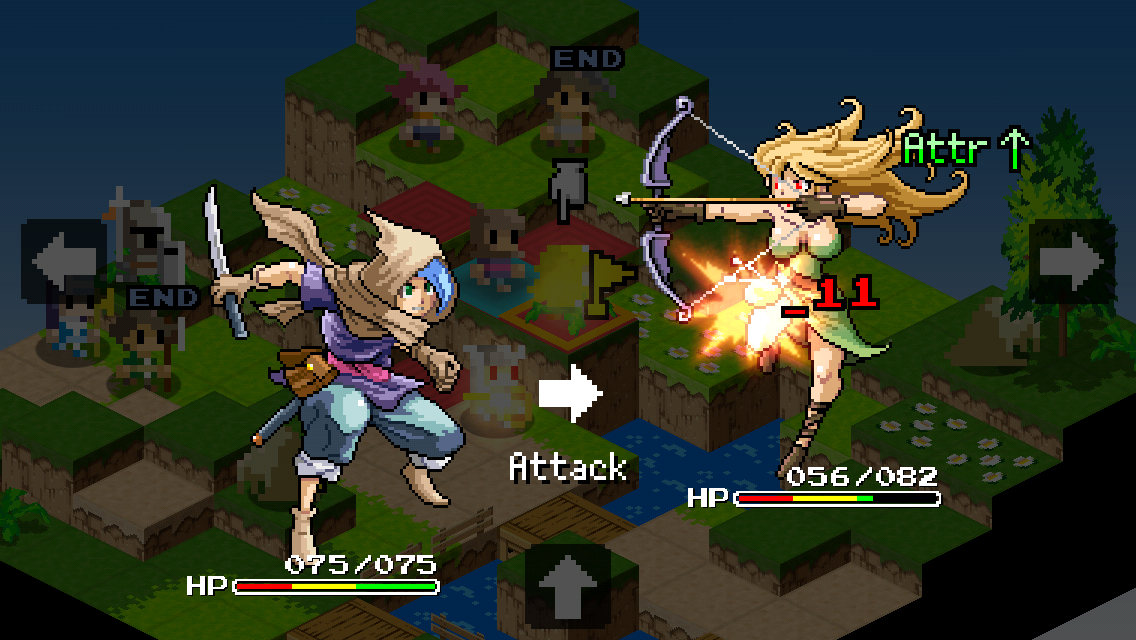 The slimes have an ace up their, er, goo, however. If you can manage to get your slime next to an enemy unit, you can attempt to take it over by sliding down its throat. The more powerful the enemy, the harder it is to take over their body, and I don’t need to tell you that a failed attempt will leave that particular slime in a very bad position. To help with that, certain slimes have abilities they can use to make the enemy more susceptible to being controlled. Additionally, if you manage to match your slime’s element to the human they’re taking over, you’ll end up with boosted stats. Slimes come in all three elements, but they also come in many different types, as well. The basic blue slime doesn’t offer any special benefits, but he can slow down the enemy by oozing them. You’ll come across slimes who can warp around the map, ones that can increase their host’s stats in various ways, and even slimes that can survive being chopped in half. All of this elemental matching makes each level a sort of puzzle that you need to unravel. Generally speaking, the odds are heavily stacked against you, but if you make smart moves and capture the right enemies with the right slimes, you can win.

Each of the stages can be played on multiple difficulty settings, with harder difficulties throwing stronger enemies in greater numbers on the map. The reward for playing on higher levels, beyond simple satisfaction, is to increase your odds of a rare slime joining you after. Whenever you clear a stage, a slime will want to join your number. More powerful slimes have a smaller chance of joining, but clearing the stage on the highest level improves the odds. You’re going to need a good group of powerful slimes if you want to make it through the game, so it’s worth trying to earn them, even if you might have to come back later with a more powerful team to do it. Now, while you can amass a pretty large army of slimes, one of the things that makes the game challenging is that you have a hard limit on how many you can deploy at a time, and that number is often quite small. Of course, if you like, you can break the game wide open if you’re willing to open your wallet. 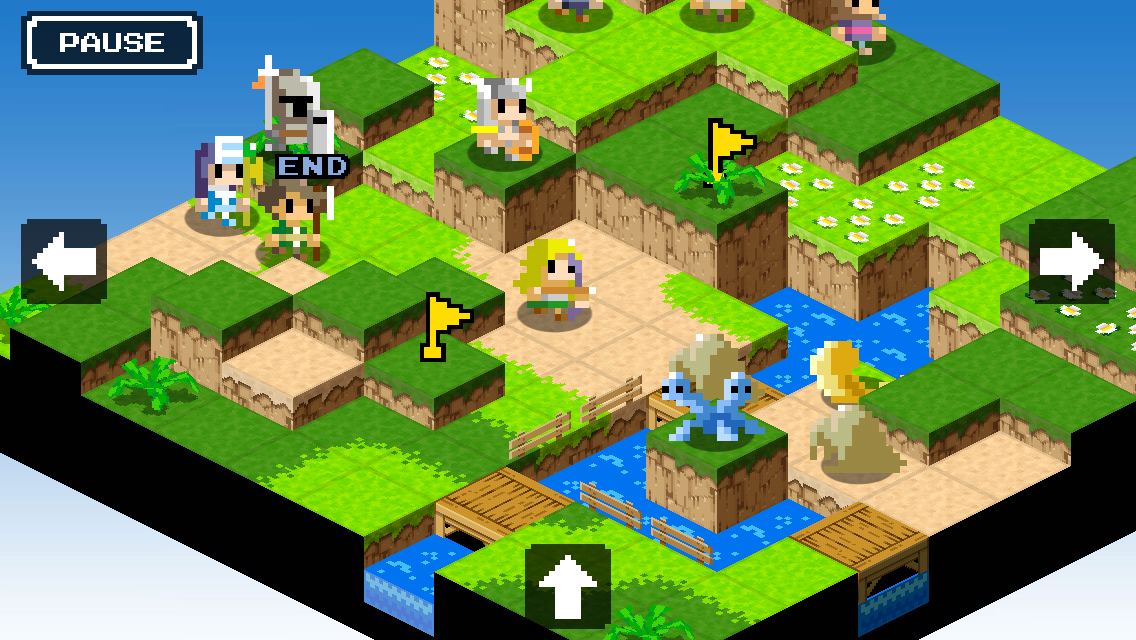 Let’s talk about the IAP in Ambition Of The Slimes. It comes in three different flavors, and each of them allows you to switch off the ads from the options menu. The first type, and the only non-consumable, is the Slime Box. For $1.99, you can increase the maximum amount of slimes you can have in your army by 10. You can buy up to two of these, if you’re so inclined, giving you enough room for every slime type in the game and then some. The next kind of IAP is the Sortie +1, a consumable that allows you to send an extra slime above the regular limit to one battle for one time only. These come in packs of three for $0.99, so I suppose if you’re looking for the best and cheapest way to simply kill the ads, this is the way to go. The last IAP item is the Anti-Fatigue, a consumable potion that resets a slime’s fatigue level to zero. They come in packs of various sizes for $0.99, $1.99, and $2.99.

Every time you use a slime, they get a little bit fatigued, and if they hit their limit, you can’t use them again until their fatigue gauge goes down. It will go down over time on its own, or you can pop one of those IAP items to knock it down to zero. The farther into the game you go, the more fatigued your slimes will get from each battle. You can always field different slimes while fatigued slimes rest, which makes the Slime Box a more enticing purchase. Honestly, as monetization goes on a free-to-play game, what’s here isn’t all that bad. All of the stages are possible to beat with the regular sortie limit, you can juggle slimes to get around fatigue, and no matter what you buy, you can shut off the ads. The flip-side of that is that if you don’t buy anything, you’re going to have to deal with ad banners showing up fairly often, even on top of battles. My recommendation is to try out the first few levels after the tutorial, and if you’re having fun, sink a couple of dollars into a Slime Box. The game is worth it, and it’s nice to have extra room for more slime buddies. 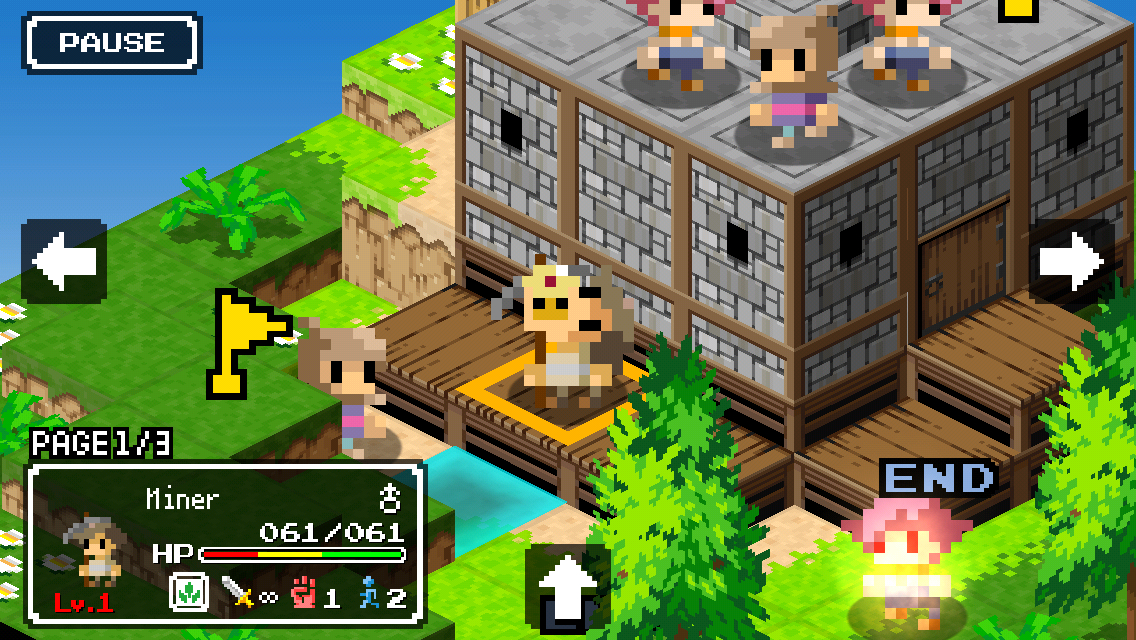 The game’s art style is pretty strange, perhaps befitting the theme of the game. It’s deliberately retro, along with the music and sound effects, but when opponents clash, you get a nicely-detailed still image of the characters involved. The animation for taking over an enemy is especially weird, with their mouths gaping wide open while the slime jams itself down their throat, as a loud swallowing sound effect plays. The off-kilter graphics and chip-tunes lend the game a goofy vibe, a feeling that is oddly supported by the game’s weak English translation. You can sort of parse what characters are saying if you think about it, but I’m guessing that it’s the work of a machine translator, and not a very good one, either. Lucky thing for the developer that bad translations are also nostalgic for English gamers, right?

The strange atmosphere somewhat elevates Ambition Of The Slimes beyond its otherwise very plain take on strategy RPGs. Taking over enemies is certainly novel, but once you’ve done that part of each battle, the rest plays out in disappointingly typical fashion. I should also mention that I’m not personally a big fan of strategy games that work too strictly like puzzles. Part of the fun in games like these is coming up with your own ways to win, but with how weak your slimes are on their own and the damage calculations’ heavy reliance on element/height bonuses, there’s generally one particular solution for making it through the later maps. There’s a certain enjoyment from discovering that one solution, but I generally prefer these kinds of games to be more open-ended. All that said, Ambition Of The Slimes costs nothing to try and I can honestly say it tries harder than most to stand out from the pack. It’s worth looking into for that alone, and you might just find it gels with you a little better than it did with me.