The new year is already off to a great start for iOS RPG fans. We’ve received a port of the wonderful Dragon Quest 5 ($14.99), an excellent puzzle RPG in Hero Emblems ($2.99), and even a couple of indie surprises in the form of Lowlander ($1.99) and Adventure To Fate: Battle Arena (Free). I’m feeling pretty good about 2015’s potential RPG line-up already. While we don’t know exactly what’s in store for us, there is one thing we can surely count upon: Kemco will be here with about a dozen new RPGs, some of which might even be good. That said, they’re not getting off to a great start with Dead Dragons ($3.99), their first release of 2015. While it’s not as lousy as some of their efforts, I’m not sure it’s actually worth your time and money, either.

Dead Dragons is the work of developer Magitec, who worked on games like Chrome Wolf ($7.99) and the absolutely wretched Shelterra The Skyworld ($3.99). Typically, their games have pretty good plots, weak characters, awful dungeon designs, at least some vague attempt at gameplay innovation, poor technical performance, and story content locked behind IAP. Dead Dragons won’t be breaking that pattern in the least. The main draw here is the story, which tells the tale of a young man named Will who is cursed by a dragon at the beginning of the game. The only way to break the curse and prevent his own death is to kill the dragon who marked him, so Will sets off on a hunt across the world. The plot is twisty, with plenty of treachery and moral ambiguity, as is often the case in Magitec’s work. While the localization is awkward and stilted, the quality of the plot shines through well enough that you might get hooked into it if you’re willing to overlook a few things. 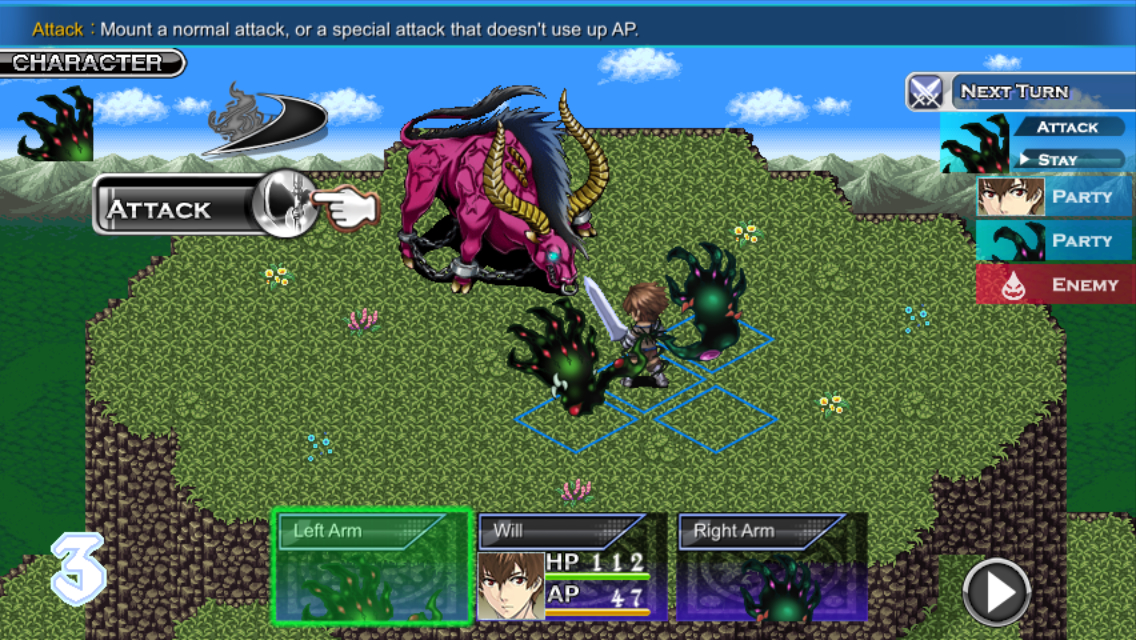 Innovation is a wonderful thing, especially in a sub-genre as well-trodden as the JRPG. I think it has quality in and of itself, but innovation without direction can be frustrating to see, simply because it has the potential to be so much more. Dead Dragons has a lot of directionless innovation, and while it provides a small boost to the game’s enjoyment, it ultimately adds a lot less than it should. I don’t hold this against Magitec too strongly, because figuring out the particulars of what to do with a new system and how to tie it all together is something that takes time, and I don’t think that’s a luxury Kemco’s developers are offered. There’s definitely something in the oven here, but it clearly hasn’t been allowed to cook long enough.

Most of those new ideas are tied up in the game’s battle system. It’s an odd thing, so inscrutable at first that the game up-front offers you a text-dump set of instructions on how it works. You might be in the habit of skipping those tutorials when they come up in games, but you’ll probably want to read this one. Your characters line up in a formation, and basically take turns moving to the front of the line and whacking the enemy. Depending on which character is where and the skills you’ve unlocked, you might have access to certain special attacks. For their part, the enemies typically only hit whoever is at the front of the line for the moment, unless they’re using a skill with a wider range. You simply input all your commands and watch them do a little shuffle while the enemies take their shots. It’s certainly novel. Adding to the complexity a bit, you can make use of Battle Cells, markers that will grant the character standing in the square a special effect. The more characters that step through the Battle Cell before one takes an action in it, the more powerful its effects will be.

Oh, and that bit about watching your characters take their attacks? You actually can’t passively watch them do that. When a character uses a regular attack, a little symbol with three diamonds on it will appear. This represents where on the enemy the character will strike, and if you hit the right point, you’ll perform a critical attack and get a boost to a special meter called the Ruin Gauge. When the Ruin Gauge is full, you can use your character’s special power for a limited period of time. During this period, your other party members will be inaccessible, and once the meter is empty, they’ll tag back in, fully restored. The Ruin Gauge fills up fairly quickly, encouraging you to use it both to end battles faster and to keep your characters healthy. 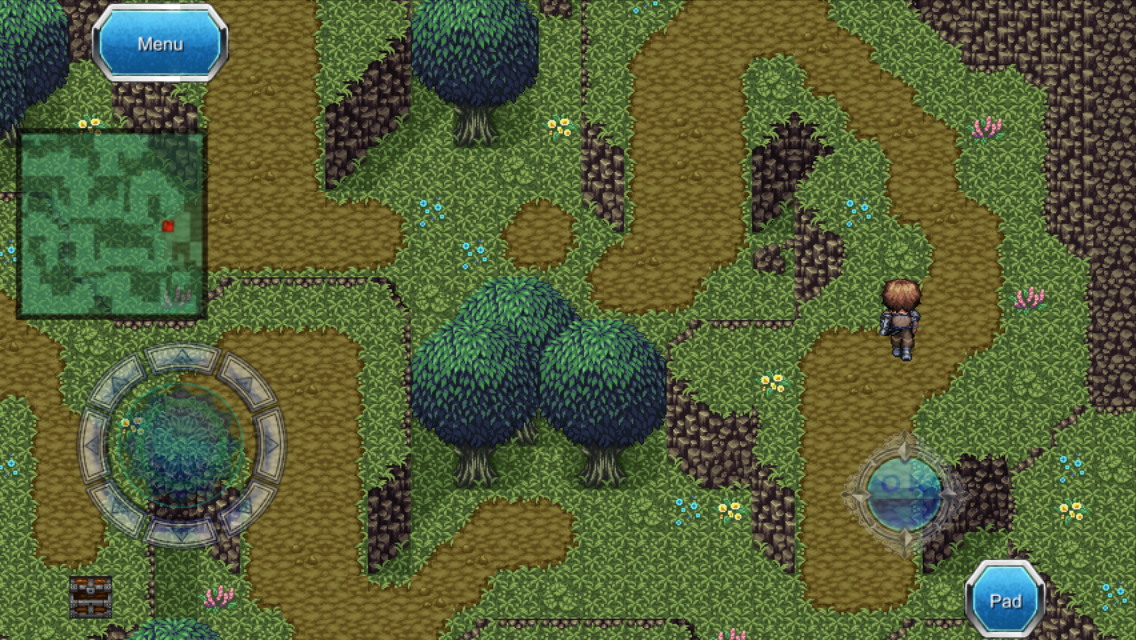 This is incredibly close to being a very cool idea. It keeps battles lively, encourages you to pay attention, and gives you incentive to use the fight command over your fancy skills. I also like how the weak point’s location changes each time you hit it, giving the battles a feeling of motion that the engine is ill-equipped to display visually. The problem is that the weak point is seemingly random, hopping around every single time you face that same enemy. What could have been an excellent chance to give the player a reward for getting familiar with the bestiary instead just turns into a scratch ticket. Worse, once you have at least three party members, it’s a scratch ticket you’re guaranteed to win once each round. If the diamond you touch isn’t the weak point, the next character in the line-up only has two to choose from, and the following character just one. If you’re lucky, you can get a critical hit for each character, but luck is all it is. It makes the whole thing feel like pointless busy work, and I quickly lost interest in it for all non-boss encounters.

I’m not going to spend much time complaining about the dungeon designs. They’re the same as ever. Long, winding, and quite linear when you really stop and think about them, yet packed full of irritants like back-tracking, useless treasure, and damage floors. The controls are very touchy in Magitec’s games compared to some of their Kemco stablemates, so you’re very likely to step all over the damage floors even when you didn’t mean to. Luckily, there’s a fairly easy-to-come-by item that negates that damage for a set number of steps, but it also begs the question of why they use damage floors to begin with. The one positive point in the dungeons is the sheer graphical variety of them. Kemco’s RPGs are fairly low-budget, leading to a lot of recycled dungeon tile sets, but Dead Dragons has several different themes. It’s a small thing, but it helps a lot. I just wish the actual designs differed as much as the visual styles do. A forest and a mansion shouldn’t feel so similar to navigate.

The sprite asset cupboard at Magitec is certainly getting well-stocked at this point, but a lot of that can be chalked up to their seeming inability to leave behind the same creaky old engine they’ve been using for the last half-decade. Every other developer Kemco uses has introduced a new engine or heavily reworked their old ones, but Magitec just keeps on plugging with this reject from the feature phone days. The scrolling isn’t as choppy as it was in Shelterra, but it’s still present and extremely obvious. Characters lack visual distinction outside of battles, and the animation is quite poor all-around. I’ll at least grant that the character portraits look pretty good, though the main character’s design is pretty dull. 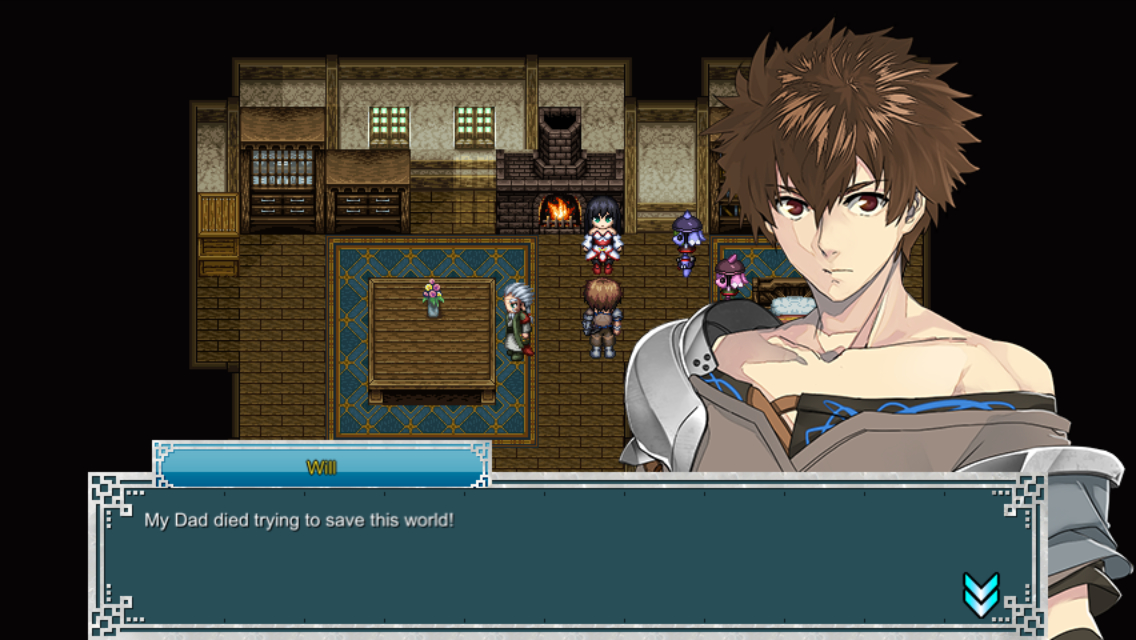 The soundtrack is small, with about four tracks in total, and quite forgettable. All of the sound effects are pulled from the usual set. It’s too bad that a game about awe-inspiring, majestic dragons can’t offer up anything better for their introduction than a text box with the word ‘roar’ in it, but it is what it is, I suppose. Dead Dragons features the usual shop where you can buy items using special points. The points are earned in-game as you defeat enemies, or you can buy them using IAP. In addition to the usual selection of cheat items, there are also two dungeons available only in this shop, with one of them containing significant story content.

Dead Dragons isn’t a terrible game, and it has a few interesting ideas to hang its hat on, but it’s really hard to recommend the game to anyone but the hungriest of JRPG fans. If I needed to kill 20 hours and only had this game, I don’t think I’d have a bad time with it, but that’s not exactly a ringing endorsement in a genre as competitive and crowded as this one.