In the first half of 2014, the hottest trend in war strategy games was the Eastern front of World War 2. We had entries from Hunted Cow, Shenandoah Studio, and Slitherine, all within a fairly short span of time. Slitherine’s title, Frontline: Road To Moscow ($2.99), was a slightly more accessible strategy game than their usual fare, and although it lacked the depth that fans of the genre tend to crave, I enjoyed it well enough. The game had a huge variety of units to play with, took terrain conditions into account, and had just enough below the surface to keep me engaged without crushing me. On top of that, the visual designs of the pieces were excellent, the base game included a generous amount of missions, and while it did release in a bit of an Eastern front boom period, the overall scenario was still quite novel for me. In theory, I should be the perfect target for a follow-up.

Yet somehow, Frontline: The Longest Day ($2.99) feels like it’s missing something. The game lets you play through five massive missions based around situations from Operation Overlord, the Allied invasion of Western Europe that kicked off on June 6th, 1944, aka D-Day. That number of missions is less than half of what Road To Moscow offered, but the game makes up for it in the sheer scope of each one. Not one of these missions is going to be something you can just power through idly in a lunch break while chomping at your sandwich. You’re going to have to set aside some time to play The Longest Day, or at least figure out a way to take each mission in digestible chunks over a few play sessions. I think it’s true to the situation, but it’s a bit overwhelming to have things at such a large scale right from the start. 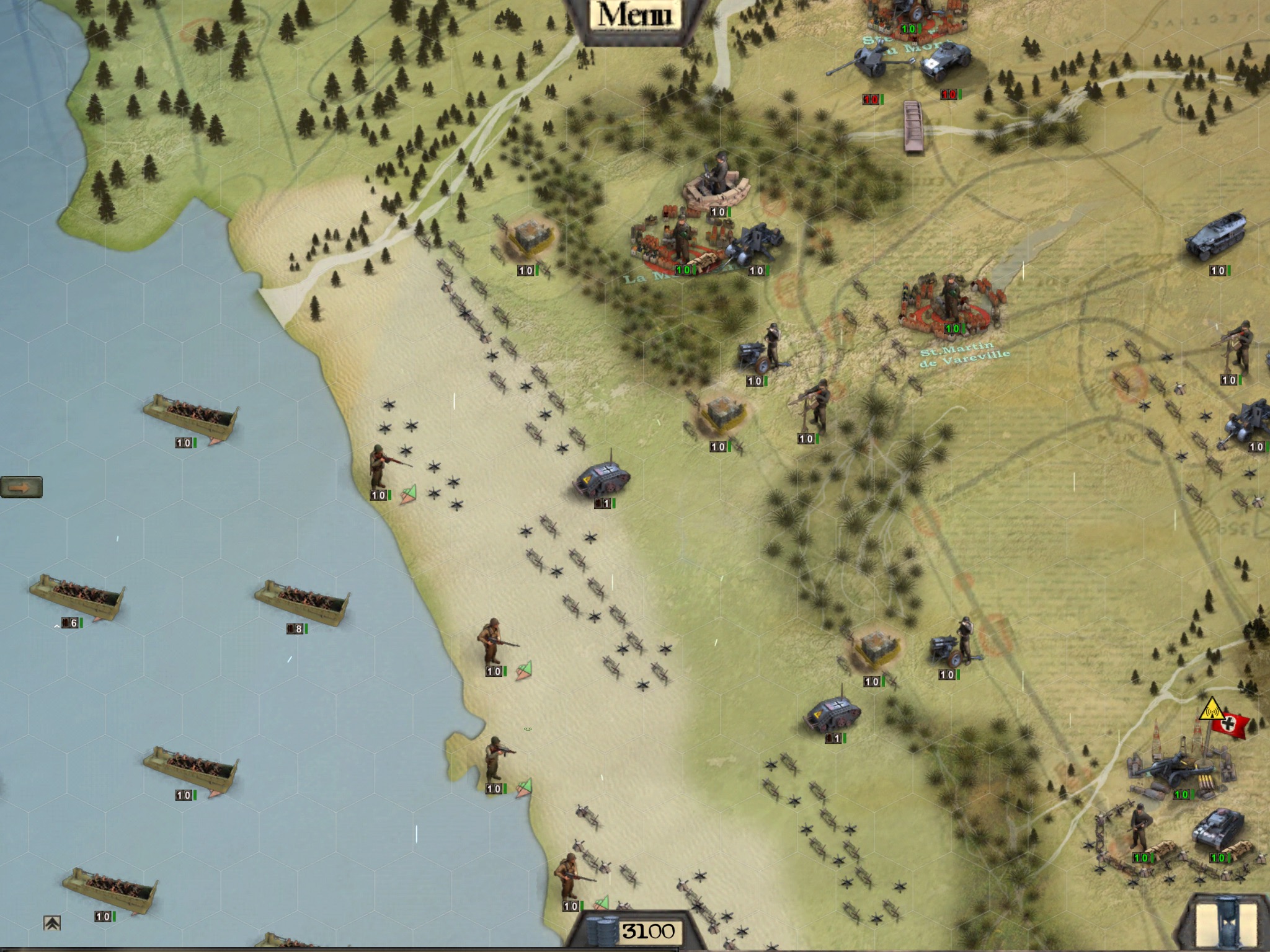 The game on the whole has little consideration for the new player. There’s no tutorial or anything to ease you into things. Instead, you’re tossed right into the Utah Beach landing without much instruction at all beyond identifying points you need to take. Clicking around will bring up some tips about each unit and their particulars, but the whole thing really should have been structured better. It took me a while to remember I could call more units in using my resources. Since the game never stopped to remind me about that, I ended up finding it on my own. To be fair, I should have remembered that from the last game, but I can’t imagine every player picking up The Longest Day will have necessarily played Road To Moscow.

Once you get your bearings, things get a little bit better. The game plays more or less identically to Road To Moscow, so it rides the line between accessibility and complexity fairly well. It leans a bit more towards the latter than most of Slitherine’s games, but speaking as a player who doesn’t live and breathe strategy games, I’m more than satisfied with how deep the game is. You have to consider the terrain, pay attention to how you’re grouping your units to take advantage of friendly support, and try to draw the enemies into unfavorable positions. Each unit has a couple of different special skills, and as in Road To Moscow, there’s quite a large variety to choose from, albeit seemingly less than in the previous game. There are mines to sweep for, bunkers to try to bust into, and all that fun stuff. Even on the lowest difficulty, you can’t just barge your way into situations and hope to come out clean. On the highest of the three settings, you’ll have to play very carefully if you want to win. 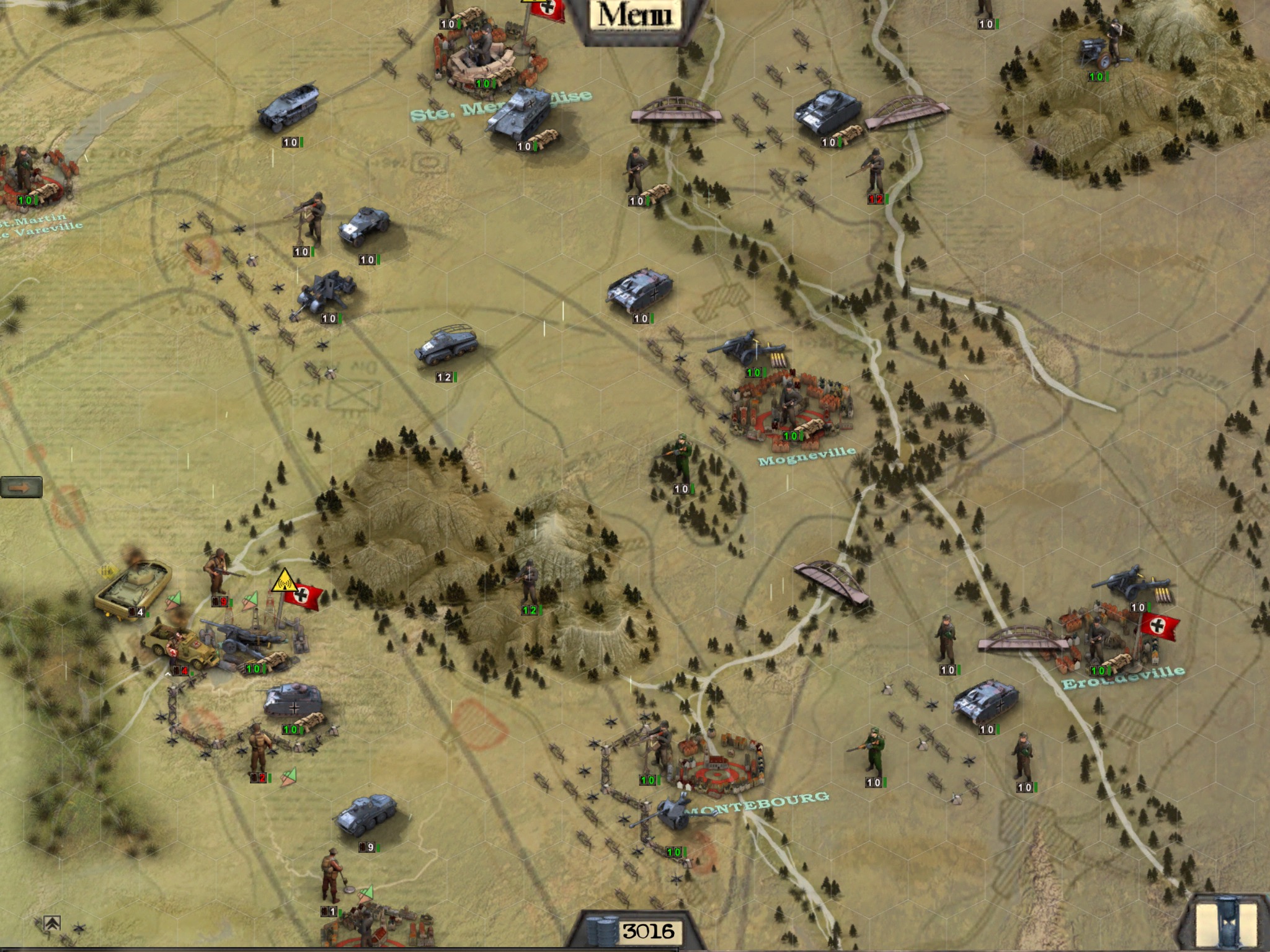 I just don’t find the setting as enjoyable as Road To Moscow. Most of The Longest Day involves knocking out entrenched groups of German troops, and they’re generally more than happy to turtle up and make you force them out. Again, this is probably realistic, but it hurts the gameplay variety badly. It’s hard to lure the enemy into traps or things like that. Instead, you’re the mouse, and you need to spring each trap as carefully as possible to avoid losing your tail. That kind of thing is pretty fun here and there, but it’s a situation The Longest Day leans heavily on, and I’d be lying if I told you it didn’t wear me down well before the game was over. With no multiplayer or shorter skirmishes to engage in, there’s nothing to run to when you start feeling the weight of the main campaign.

Some of the same problems Road To Moscow had carry over. If you’re playing on iPhone, things are a bit too tight to reliably poke at, so you’ll sometimes tap the wrong space. Fortunately, the “undo" button I requested in the last game’s review has been implemented here, so the consequences of tapping the wrong point are minimal. The presentation is fairly static once again, approximating a board game with its highly-detailed pieces and general lack of animation. It’s not the most stylish take on things, but it’s at least clean and makes it easy to follow the action when the battlefield inevitably gets cluttered with units. I’m once again uncertain if this Frontline game has the AI chops and depth to satisfy genre veterans, and the game is unusually buggy for a Slitherine product in its current state.

It feels strange to find a game based around such a big, bombastic conflict frequently feel so repetitive, especially given that it’s built on the same framework as a strategy game I really enjoyed. Thanks to that framework, the game does have its moments, but ultimately I feel that Frontline: The Longest Day suffers from contradicting goals. It’s meant to be accessible, which is naturally a selling point for less hardcore players, but having a single player mode that consists of a handful of huge, complicated maps full of entrenched enemies is likely going to chase that crowd away. In trying to place one foot on each side of the line, the game ends up falling into the divide between the two. In a genre that is among the most fiercely competitive on the platform, it’s a fatal mistake.