One of my favorite little gems released in 2014 was Pako – Car Chase Simulator ($1.99) from Tree Men Games. The premise is pretty simple: The cops are after you and you’re trying to escape in your vehicle. The only problem is you’re confined to a small space, like a parking lot, and the gas pedal is stuck to the metal. Your only option is to try and evade the police for as long as you can while avoiding running into obstacles like parked cars and buildings. It really is a very clever survival game with a killer art style. Today Pako has received its first major expansion, adding in all sorts of new goodies.

First off there are three new levels in this update, bringing the grand total of levels up to eight. The first new level is called Old Town, and its vehicle is what I’d describe as a ’70s private detective sedan. This is a tricky map with lots of sharp turns and tons of obstacles to avoid, and I’ve already had several laugh out loud moments as I try to fumble my way around. 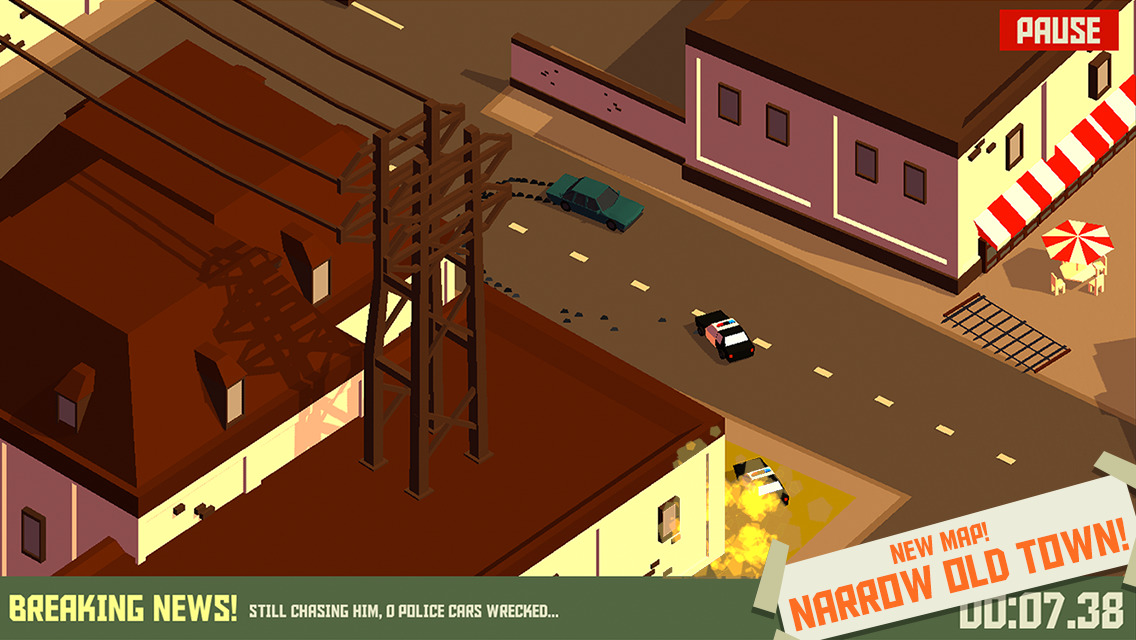 The next new map is the Desert, and its vehicle looks like a clear homage to the DeLorean DMC-12. The Desert map is unique in that it’s actually a true race track. You’re racing against other cars and if you can manage to drive through every checkpoint and complete a full lap there’s special Game Center leaderboards that track your fastest lap time and most number of laps completed. This is in addition to the normal “survive as long as possible" leaderboard, and even though you’re technically in a race, there’s still cops coming after you and you can’t run into anything–not even other racers’ cars–just like on other levels. It’s a truly hectic but fun new map.

The third new level also mixes things up. It’s called the Arena, and it’s probably what you’d imagine it to be. You’ll race around a destruction derby-style arena, avoiding junk, other vehicles and of course the cops in an effort to survive as long as possible. The Arena also marks the first time in the game you can choose from multiple vehicles. Every other map in the game is tied to one particular vehicle, but in the Arena you can select from a normal pickup truck, a delivery-style truck, or a dump truck. Each vehicle feels different from one another, and I hope this eventually opens the door for being able to use any of the game’s vehicles in the Arena someday.

As if the new levels and vehicles weren’t enough, there are also some great new features in this update. You can now change the color of any vehicle from the options screen, and although it’s pretty limited in terms of customization options and color choice, it’s nice to change things up from the default looks. There’s also now Everyplay integration so you can capture and share replays of your runs in the game, which I think will end up being a killer feature. I’ve had some pretty crazy times in this game that I’d wished I could share with someone else. Finally, there’s some new achievements and some new music to round out the update.

I loved Pako when it released, but this update pushes my love to a whole new level. I really appreciate how Tree Men Games didn’t just add new levels and vehicles and call it a day, but they added new types of levels with new features like the racing and the vehicle changing, both of which add tremendously to the game. Pako is currently on sale for just a buck to celebrate the update, so if you like stylish high-score chasers I’d recommend checking it out and dropping by the forum thread.